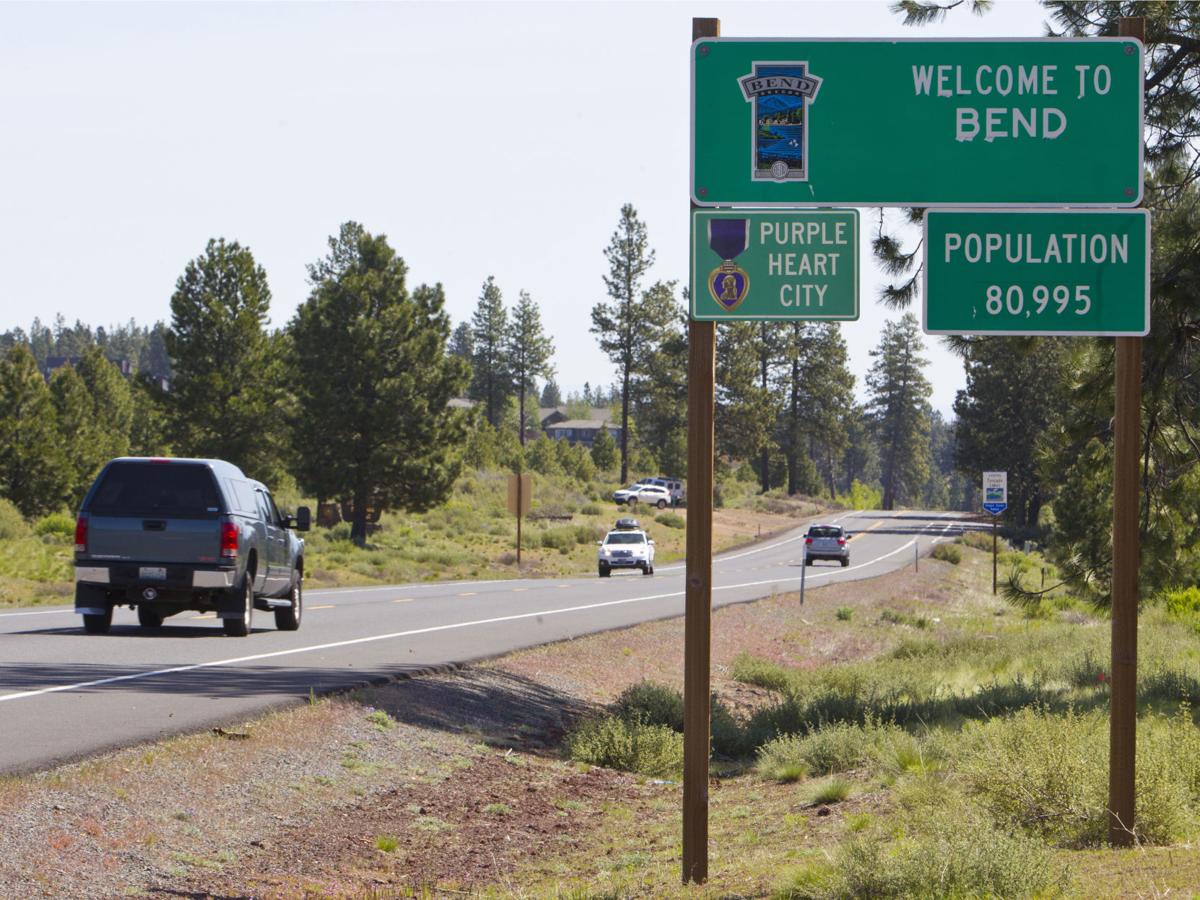 The “Welcome to Bend” highway sign on Century Drive will need a big update if population projections are correct: The city could reach 100,000 people by the 2020 census, putting it on track to rival the populations of Portland’s largest suburbs. Redmond and Prineville also hit population milestones. (Andy Tullis/Bulletin file photo) 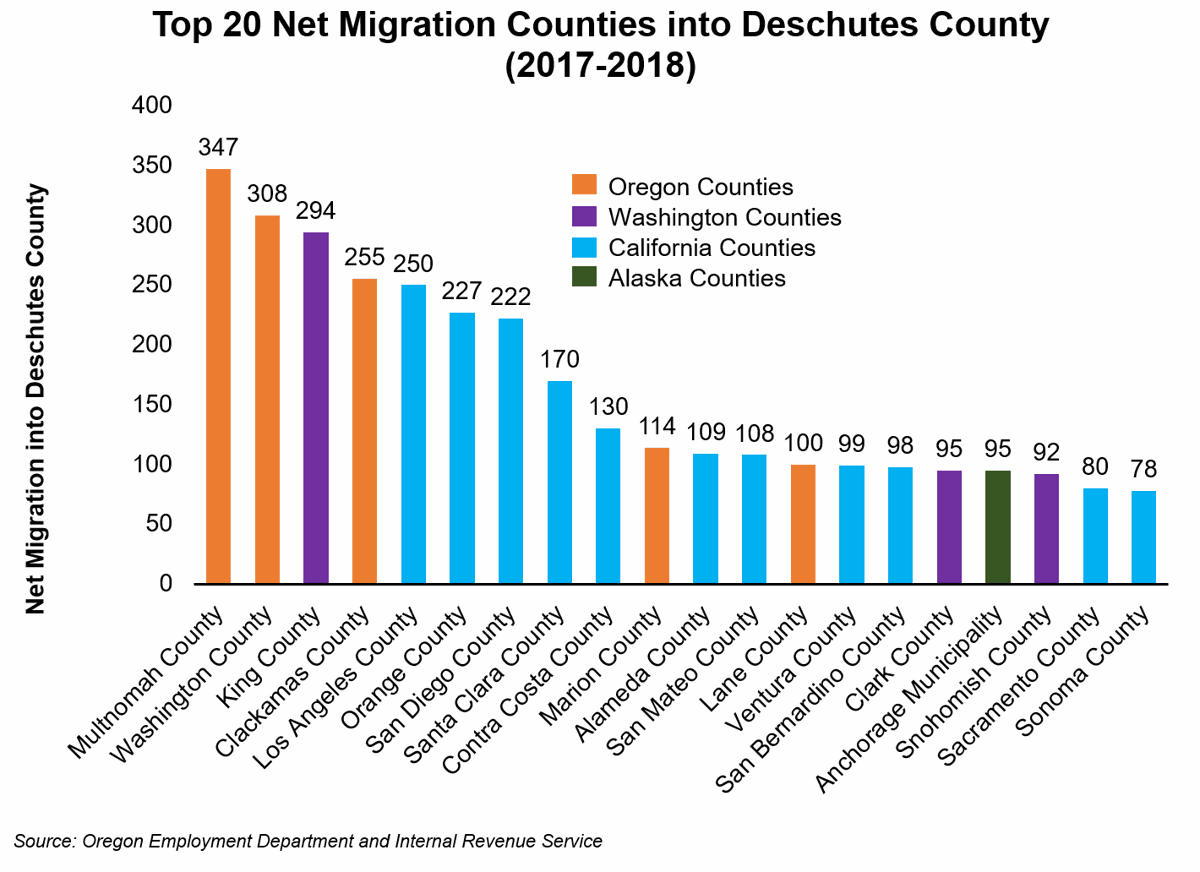 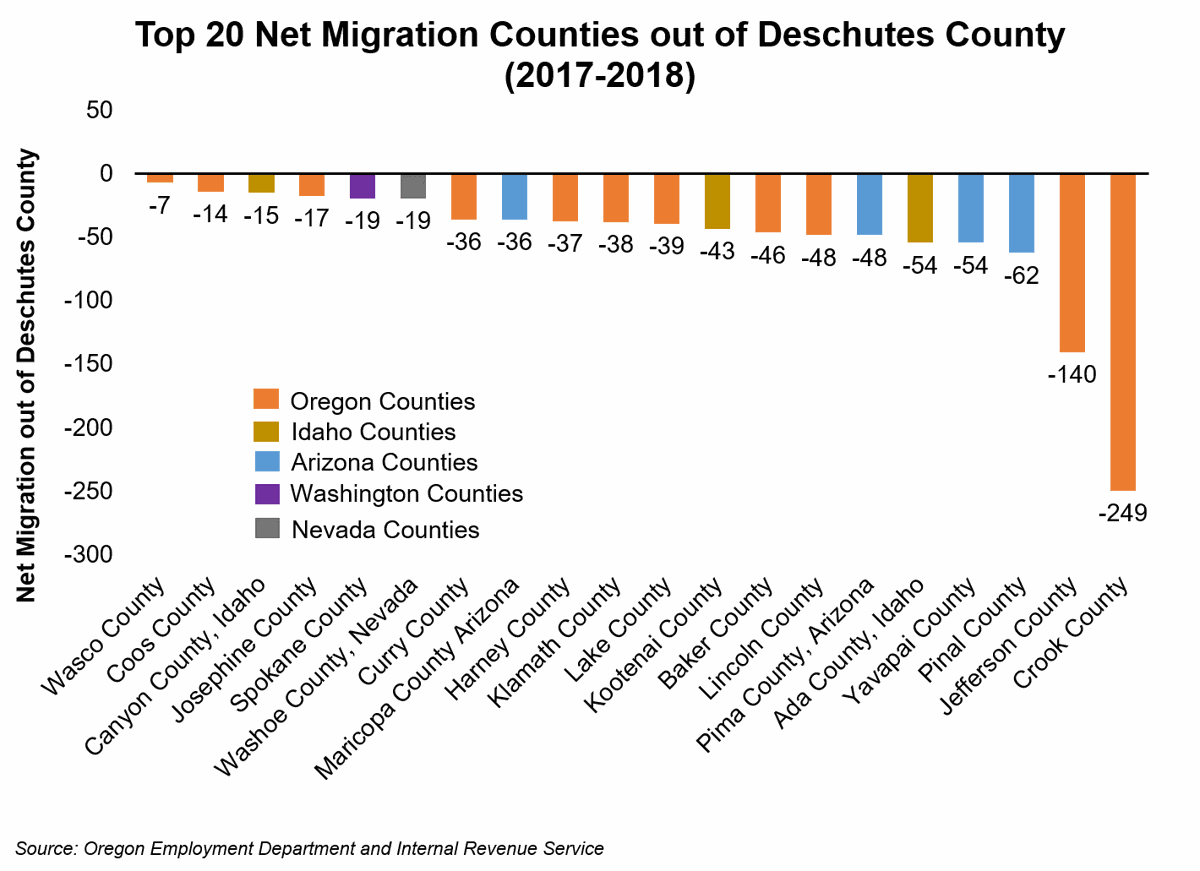 The “Welcome to Bend” highway sign on Century Drive will need a big update if population projections are correct: The city could reach 100,000 people by the 2020 census, putting it on track to rival the populations of Portland’s largest suburbs. Redmond and Prineville also hit population milestones. (Andy Tullis/Bulletin file photo)

Unsurprisingly, many people are moving to Deschutes County from around the West Coast. But unlike other major Oregon counties, not many residents are leaving.

Deschutes County had a higher net migration — the number of new residents minus the number of former residents who left — than any other Oregon county, according to tax filings in the 2018 tax year, the most recent data set available.

No other Oregon county came close. Deschutes County saw a net gain of 4,091 new residents, excluding births and deaths, between the 2017 and 2018 tax years, according to IRS data. That’s nearly 1,500 more new residents than the net population gain in Clackamas County, which ranked second in net migration..

The data was compiled by Bend-based economist Damon Runberg from the Oregon Employment Department. He said the IRS finds this information by keeping track of people who file their 2018 taxes in a different location than their 2017 taxes.

Runberg said he believes the mass migration to Deschutes County is likely due to people visiting the region for tourism, and then falling in love with the area.

“There’s a certain type of person attracted to the quality of life here, and it turns out that’s a lot of people,” he quipped.

The common stereotype is that most people moving to Central Oregon are Californians, and that is still accurate. About 2,110 more people moved from California to Deschutes County in the 2018 tax year than moved in the reverse direction , compared to 813 people from other parts of Oregon and 651 people from Washington, according to the IRS.

Runberg said it’s typical for Deschutes County to gain the most newcomers from the Portland and Seattle areas compared to individual Californian cities.

The three California counties losing the most residents to Deschutes County were, in order, Los Angeles, Orange and San Diego counties. Runberg noted that this is a shift from patterns earlier in the 2010s, when most California migration came from the Bay Area, not Southern California. He said he wasn’t sure why the switch happened.

Bend Mayor Sally Russell said the recent growth of telecommuting may play a role in people leaving major cities like Seattle and San Francisco for Central Oregon. She said at least 20% of Bend’s workforce works remotely, and it isn’t difficult for these workers to quickly fly to a major West Coast city from Redmond Airport.

“People historically had to live where they worked, and go here on vacation,” Russell said. “(Telecommuting) gives them the ability to live here, in a small isolated region, which might not have been true 10 years ago.”

Russell also said the region’s economy diversified after the Great Recession, and no longer relies as heavily on tourism. There are now more types of jobs available in Bend and Deschutes County, she said.

However, when adjusting migration population growth for a county’s size, Deschutes County is only in second place among Oregon counties. Its population grew by 2.8% from migration — but Crook County grew by 3.8%, gaining 624 more residents than it lost in the 2018 tax year.

Other places that gained more Deschutes County residents than vice versa include the Spokane, Washington, and Boise, Idaho, areas, along with multiple Arizona counties.

Runberg guessed that a major reason why people were leaving Deschutes County for Crook and Jefferson counties was cost of living.

“If you have a job in Redmond or Bend, you could live in Crook or Jefferson counties, have a more affordable cost of living, keep your job, and buy the house you maybe couldn’t afford in Bend,” he said.

Runberg added that some people may prefer a more quiet, rural lifestyle. Despite housing prices dipping in Bend during the Great Recession, there were still plenty of people leaving Deschutes County for its more rural neighbors, he said.

As for Boise and Spokane, Runberg guessed those cities were popular due to having a similar quality of life and geographic climate as Bend, while being more affordable and having more diverse job opportunities.

Prineville Mayor Steve Uffleman said his city, the only incorporated community in Crook County, has seen an economic boom due to tech companies including Facebook and Apple opening data centers nearby.

He also said Crook County’s small-town feel might be attractive to long-time Central Oregonians who didn’t like the rapid changes or growing traffic in Deschutes County.

“Culturally, Prineville is much like Bend used to be,” Uffleman said. “It’s a conservative, know-your-neighbors, kind of a cowboy attitude, I guess.”

Madras Mayor Richard Ladeby said people are moving to Jefferson County for a slower, family-friendly way of life. He said he moved to Madras from Salem in 2007 partly for that reason.

“In Bend and Redmond, it’s getting pretty crowded,” Ladeby said. “We don’t have the traffic problems and the hustle and bustle of everyday life.”