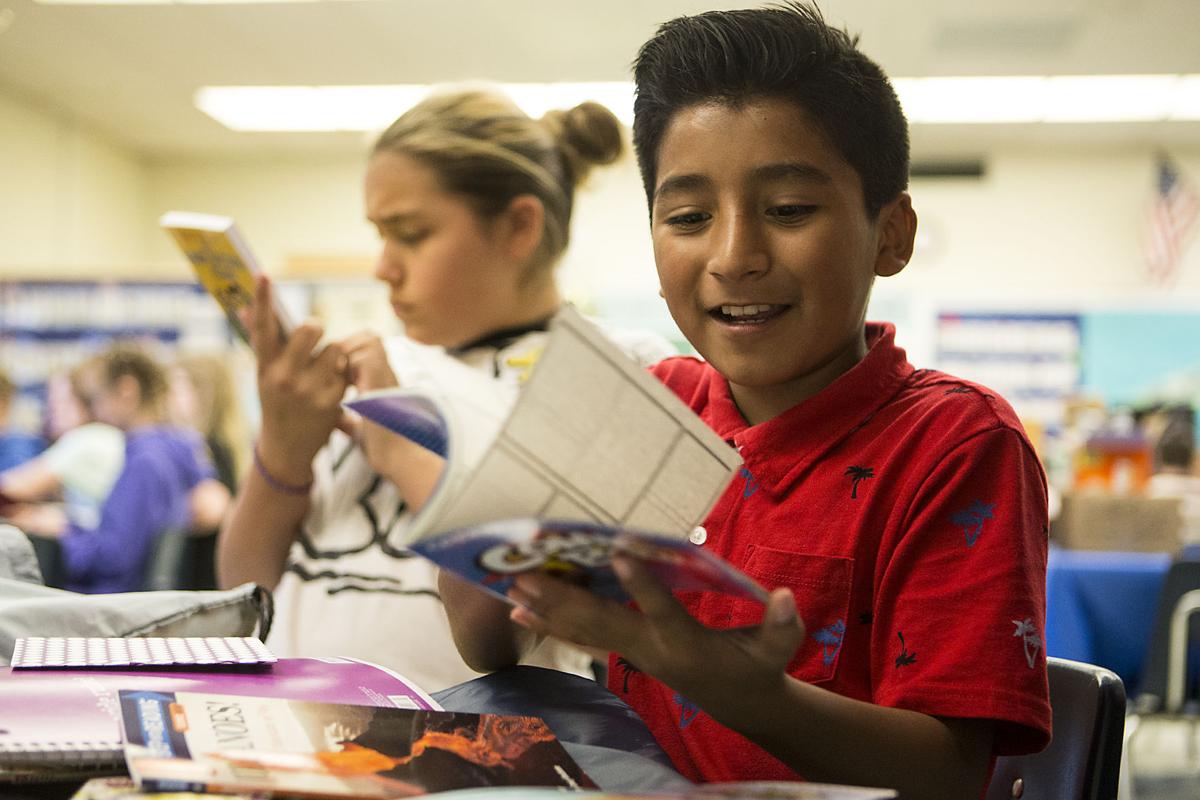 Rogelio Reyes Martinez, a fourth grader at Juniper Elementary School, smiles as he looks through a bag of books he received from the Fireflies project Thursday. 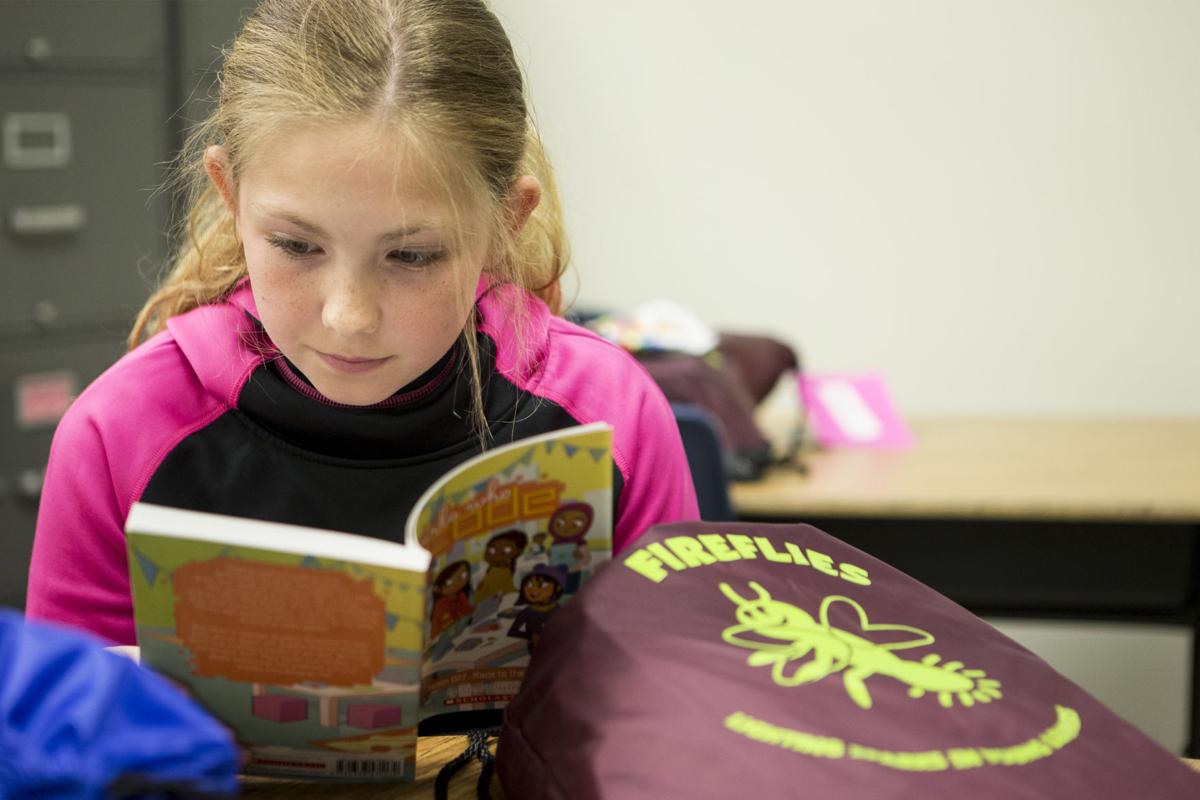 Emma Spry, a fifth grader at Juniper Elementary, reads after receiving her bag of books from the Fireflies program, which is run by the local Unitarian Universalist chapter.(Ryan Brennecke/Bulletin photos)

Rogelio Reyes Martinez, a fourth grader at Juniper Elementary School, smiles as he looks through a bag of books he received from the Fireflies project Thursday.

Emma Spry, a fifth grader at Juniper Elementary, reads after receiving her bag of books from the Fireflies program, which is run by the local Unitarian Universalist chapter.(Ryan Brennecke/Bulletin photos)

REDMOND — In their reading class Monday morning, a group of fourth grade students at M.A. Lynch Elementary were told by their teacher they would all get free books for the summer. Smiles quickly spread across many of the kids’ faces, and their excitement grew once they opened their book bags and saw the books inside were tailored to their interests.

“I love these books!” Emmanuel Castillo Mendez exclaimed as he opened his bag to find a “Captain Underpants” book from the illustrated children’s novel series.

The kids who receive book bags, all in kindergarten through fifth grade, are predominately students who are in reading intervention services, which make up about 20-30% of the population of the four elementary schools. Students who lack access to books for various reasons — whether they’re homeless or English-language learners — also receive book bags, Horwich said.

The book bags — which also contain snacks and activities such as coloring booklets or dice games — are handed out to avoid the “summer slide,” in which students can lose knowledge during summer break.

“We know that the backslide that happens over summer when students don’t read is a real issue,” said Kelly Hill, the reading specialist at Lynch Elementary. “The more books you can get in the hands of kids, the better.”

Horwich said this is an even bigger problem for students with reading difficulties or those in low-income families.

“The kids who are better off … they’re going to camp, families are reading to them, going to the library,” he said. “Kids who aren’t so well-off, they’re sitting at home, watching TV, their parents might not be home, and they’re losing (reading skills). When they come back in the fall, the gap has widened.”

Each student gets five books. Horwich said the books are always new, and teachers select the books based on each student’s interests, whether it’s sharks or astronomy. This helps motivate the student to read the books, he said.

“(Teachers) will find what works for that kid, because the key for a successful summer reading project is giving them books they’ll look at,” he said. “If they’re not interested, they’re never going to open them.”

The program began with Horwich and a few other volunteers in a third grade tutoring program at Juniper. In June, they asked the administrators if they could buy books for the students in the program, and Horwich and Juniper’s staff decided to expand the book-giving beyond just third graders.

The next year, Horwich said he asked Juniper’s administrators for suggestions of local low-income schools that could also benefit from Fireflies, so called because it’s meant to light sparks of learning. School leaders pointed them toward Ensworth and Rosland. All of the participating schools are Community Eligibility Provision Schools, meaning the federal government gives them funding to provide free meals for every student without requiring parents to fill out free and reduced lunch applications.

Ensworth Principal Dana Pedersen said Fireflies was a major benefit to her school’s students, many of whom have fewer learning opportunities over the summer.

“We feel like we’re sending them (home) with a first-aid-kit for reading,” she said.

Heather Anderson, the reading and math intervention teacher at Juniper who’s helped run Fireflies at her school for three years, had nothing but praise for the program.

“These are the kids that have spent all year honing their reading skills … and sometimes when they go home for the summer, they don’t have books at home,” she said. “Fireflies has filled that hole.”

Horwich said running Fireflies this year will cost about $12,500. A majority of the funding, $8,000, came from members of the local Unitarian Universalist church and church-sponsored fundraisers throughout the year. Local companies and nonprofits, such as Hayden Homes and the Ford Family Foundation, have also donated to Fireflies.

Next summer, Fireflies could add summer meetups for students in the program, where they could discuss the books they’ve read. As far as adding more schools, Horwich said his Unitarian Universalist church didn’t have enough volunteers to add schools indefinitely, and he hopes other churches or nonprofits in other Central Oregon cities could join the program to help.

Horwich called volunteer visits to elementary schools his “highlight of the year.”