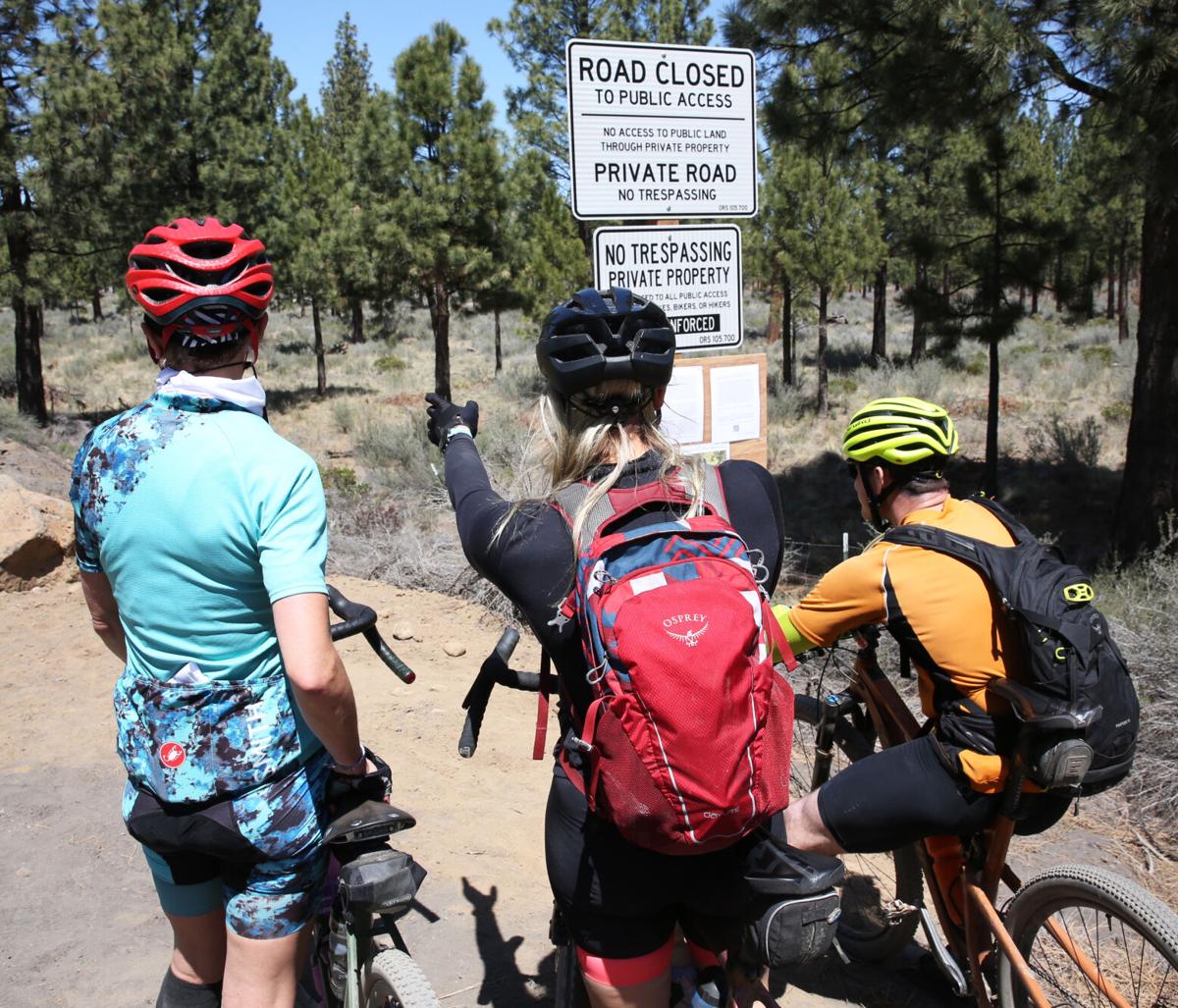 Mountain bikers stop Tuesday to read a sign at a gate closing off Forest Road 4606 near Shevlin Park. 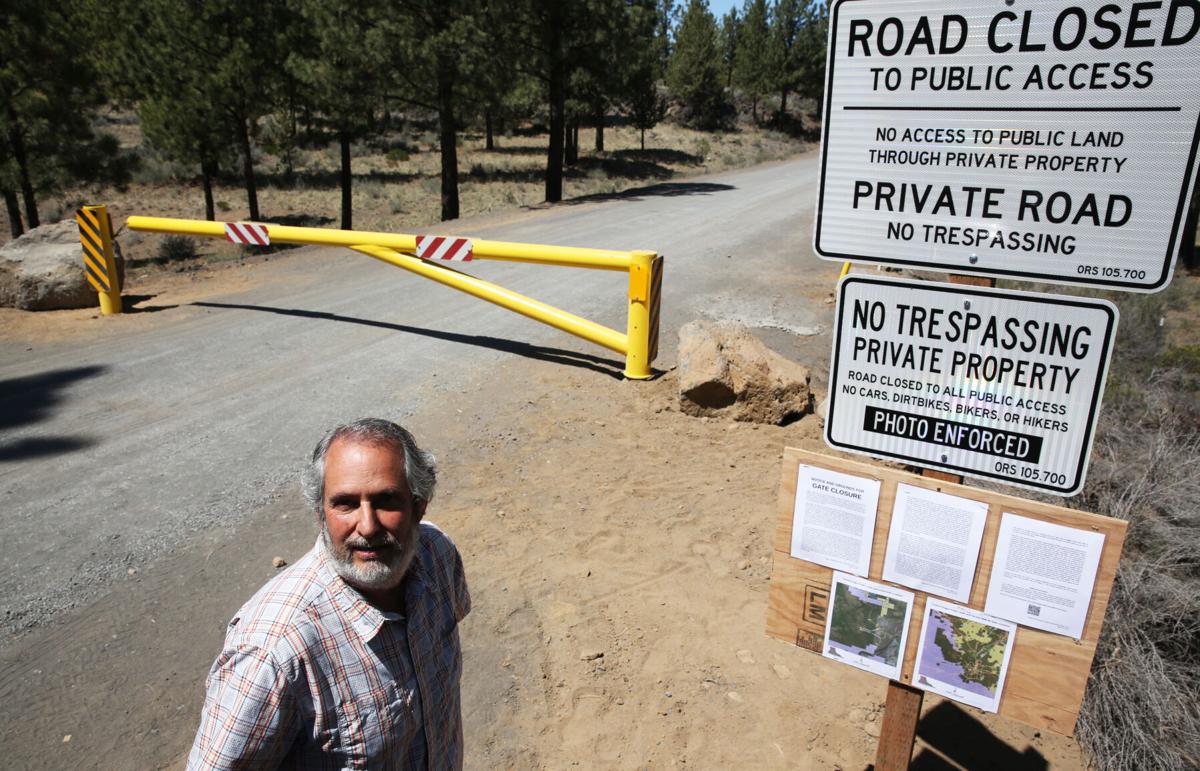 John Blankfort, who is critical of the gate, stands near it Tuesday on Forest Road 4606. 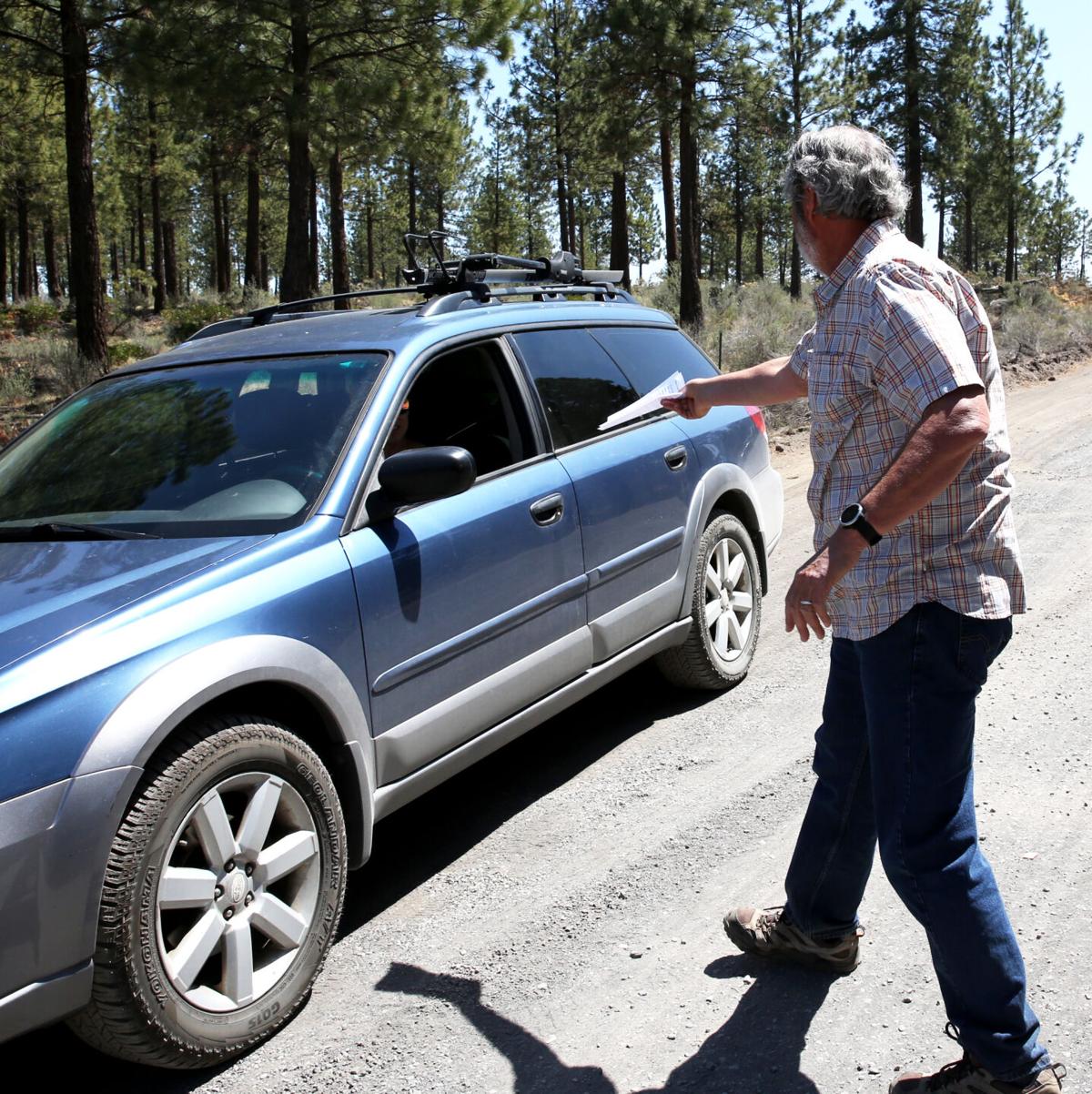 John Blankfort gives information to a driver on Forest Road 4606.

Mountain bikers stop Tuesday to read a sign at a gate closing off Forest Road 4606 near Shevlin Park.

John Blankfort, who is critical of the gate, stands near it Tuesday on Forest Road 4606.

John Blankfort gives information to a driver on Forest Road 4606.

A gravel road that connects Bend and Sisters through a scenic area of the High Desert was blocked by gates on Monday by a local landowner who says the road invites illegal camping, poaching and arson.

Forest Road 4606 is frequently used by hikers and bikers. Their access is now in doubt while the U.S. Forest Service challenges the installation of three gates.

At the core of the issue is who owns a 3.5 mile stretch of Forest Service road where it passes through property owned by Dr. James Verheyden, an orthopedic surgeon in Bend, Deschutes National Forest spokesperson Jean Nelson-Dean said in an email.

“That is the legal question that we are pursuing with our legal counsel. That is the issue,” said Nelson-Dean.

Land disputes between private landowners and federal authorities are not common in Bend, but as the city explodes in population, more individuals are moving out to areas that bump up against federal lands. Forest Road 4606 passes through private property where the Forest Service has an easement.

“We were aware that private landowners had installed three gates on FSR 4606/Sisters Mainline Road,” Nelson-Dean said. “We are now aware those gates have been closed and locked.”

Nelson-Dean said the Forest Service is working with the landowners “to resolve the issue amicably.”

“We value the public’s access to FSR 4606/Sisters Mainline Road and hope the situation can be resolved quickly,” Nelson-Dean added.

But on April 4, Verheyden posted a message on the website Next door explaining his plans for the road. He said he has maintained the road at his own expense without help from the Forest Service and the maintenance is very expensive.

“This is made even more difficult when people speed down the road at 55 mph after it is graded, creating damaging washboards, or when motorbikes perform donuts 100 yards behind the road grader,” Verheyden said in the note.

A notice posted along the road near the gates by Verheyden states the road is on private property and the gates are closed to the public, effective May 10.

The notice explains that the road was closed due to repeated vandalism in the area, as well as arson, poaching, dumping and illegal vehicle use.

The notice adds that the Bull Springs Road and portions of road 4606 “are not county maintained roads, but in fact Local Access Roads, only to be used for local access to the property parcels that touch the publicly dedicated portion of the road.”

“A Local Access Road is a public road that has been dedicated for public use but has not been accepted by the County for maintenance,” said Doty in an email.

Doty said the new gates do not appear to be placed in accordance with any land use decision issued by the county. But he adds that the dispute is mainly with the Forest Service surrounding the easement claims.

Shanda Group Limited, which owns a 33,000-acre tree farm just north of Verheyden’s land, has in the past encouraged nonmotorized recreation on its property. That land is now inaccessible from the south due to the gates.

Locals who use the area for walking, biking and exploration of the forest road have voiced their concerns.

“This is a Forest Service road. It’s a public road. It looks, acts and feels like a public road. What gives this guy the right to put up a gate?” said John Blankfort, a local resident who frequents the area. “This is an example of a multimillionaire trying to lock up the forest.”

County Commissioner Phil Chang said he is looking into the matter and gathering information on the dispute but would like to see public access continue. In an email he sent Sunday to Doty, Chang said the Forest Service has indicated it would contact the U.S. Attorney’s office to resolve the issue.

“As a recreationist myself who has been on the 4606 road, I appreciate how important that patch of public land and access is for so many people in Deschutes County,” said Chang. “So I am interested in learning what the county can do to resolve this situation so the community can continue to access that area.”

Editors note: This article has been corrected. The original version misstated the name of the road.

Having a small piece of property in a neighborhood next to BLM I sympathize with the owner. Our neighborhood fought OHV, hunters, dirt bike riders for years to get them to stop trespassing on private property. Neighbors were threatened with a beating when she chained her own driveway to keep out trespassers.

Not all who use this roads are good people. Some are frankly, destructive jerks. We received no help from BLM or Deschutes County to solve our problem. We too had to fix a County road that they designated public access.when it got so bad UPS couldn’t drive on it. It cost a lot of time and money.

There are issues on both sides. It’s not just one “mean” owner trying to spoil others’ fun. The County and the Forest Service must take some responsibility on the mess they helped make and solve this problem.

Jean and James Verheyden have a legal agreement (easement) with the US Forest Service. If they don’t like what the Forest Service is doing, they can take legal action.

You don’t settle disputes in this county by tossing up No Trespassing signs, locked gates and then say you are right.

“As a recreationist myself who has been on the 4066 road, I appreciate how important that patch of public land and access is for so many people in Deschutes County,” said Chang. “So I am interested in learning what the county can do to resolve this situation so the community can continue to access that area.”

He omitted "FSR" so isn't that what he said?

Please read carefully. The road in question is FSR 4606 not FSR 4066 as Commissioner Chang said he likes to use.