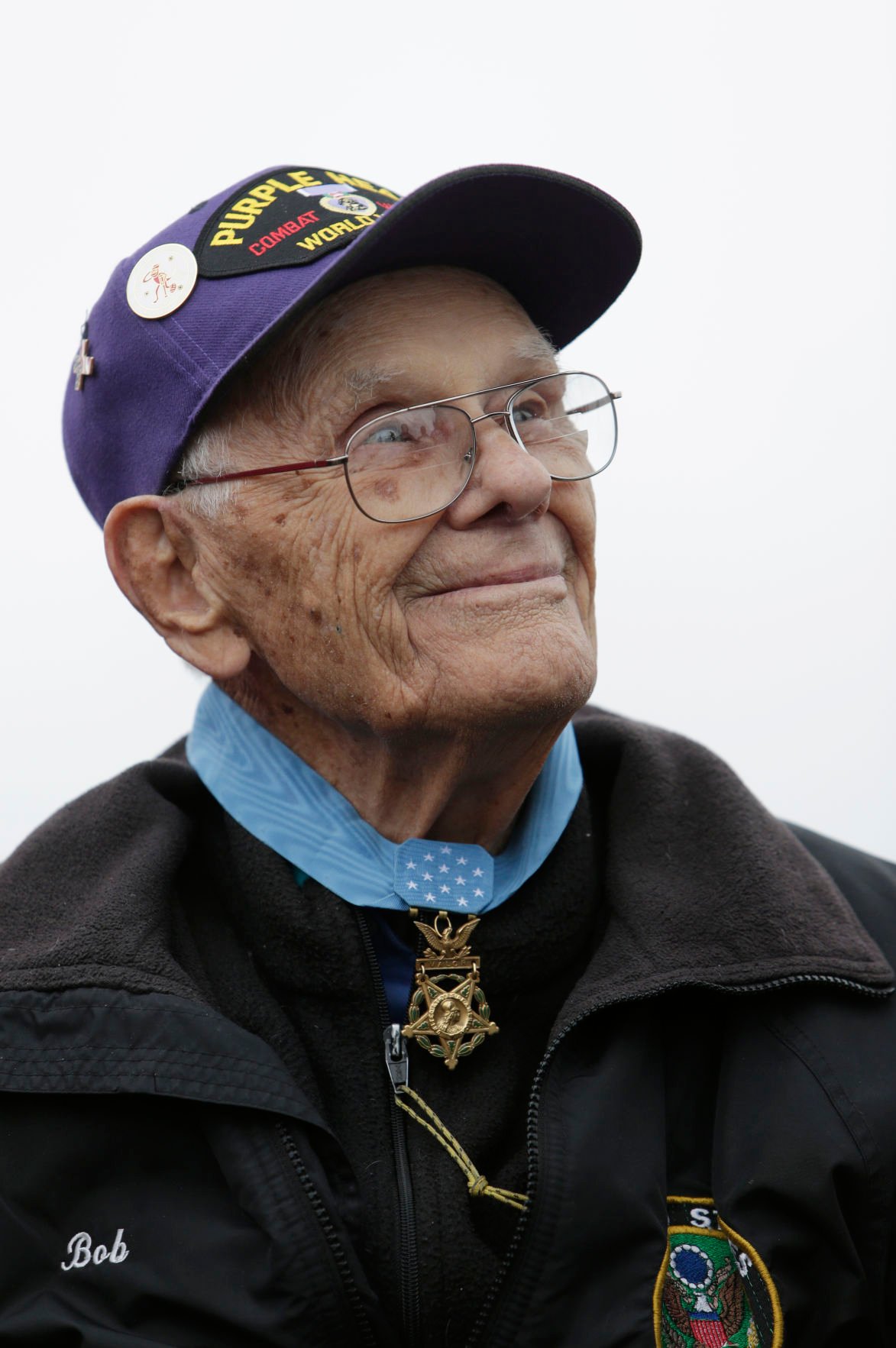 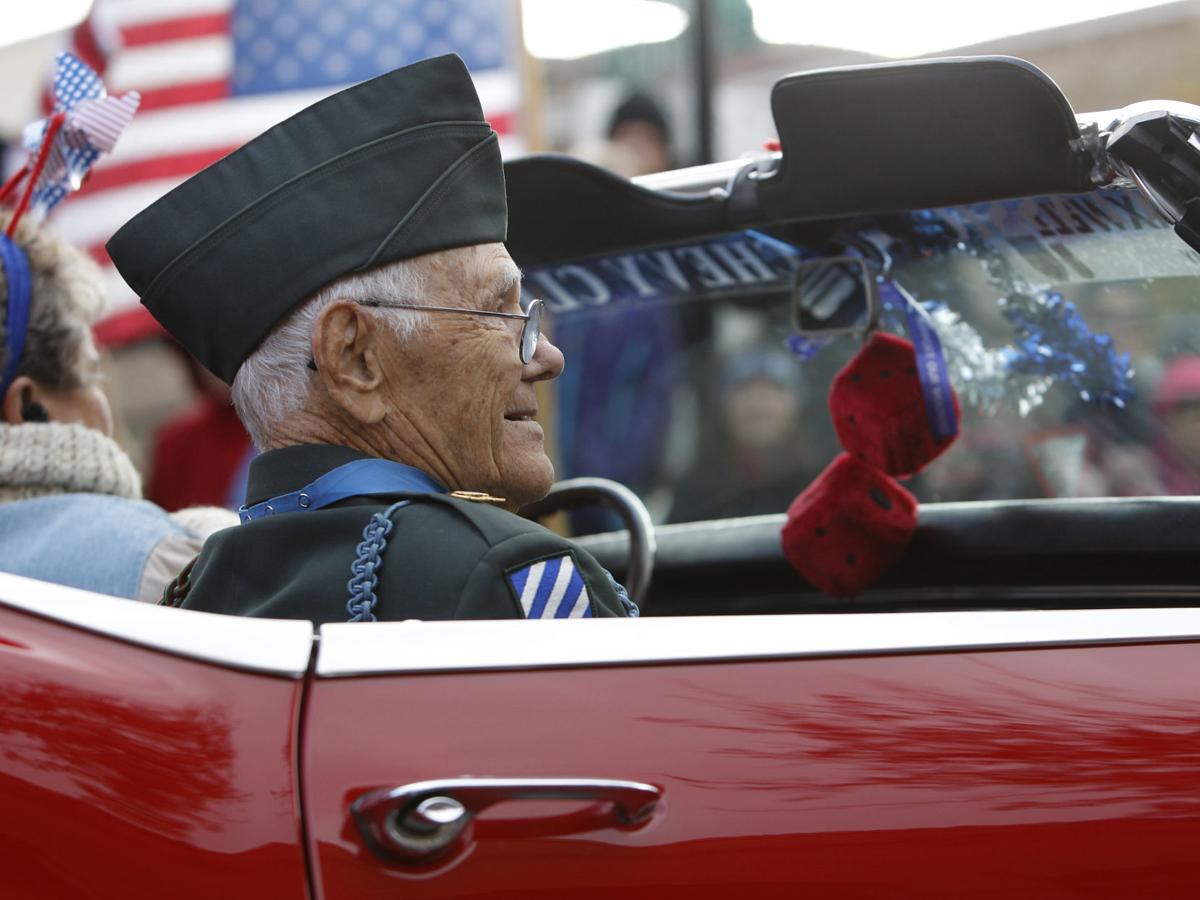 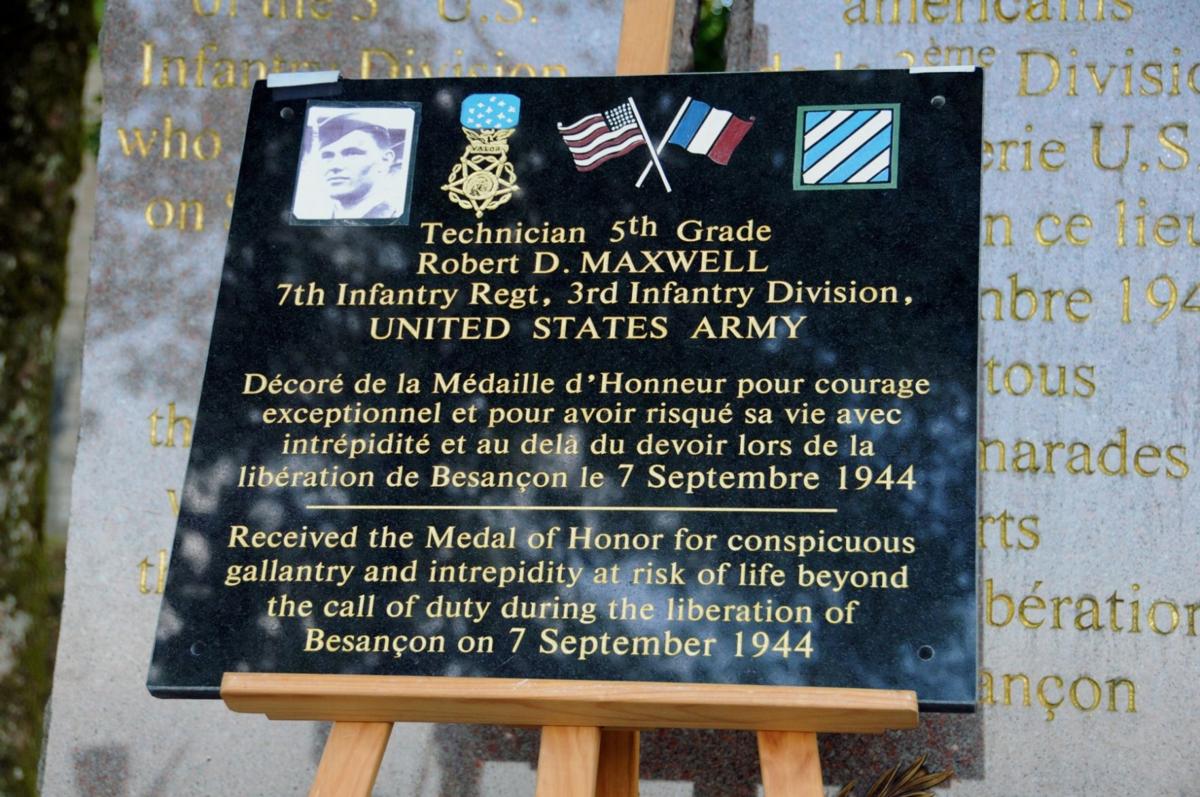 France unveiled a plaque to Medal of Honor recipient Bob Shotwell of Bend during a ceremony in October 2018Credit: US Army 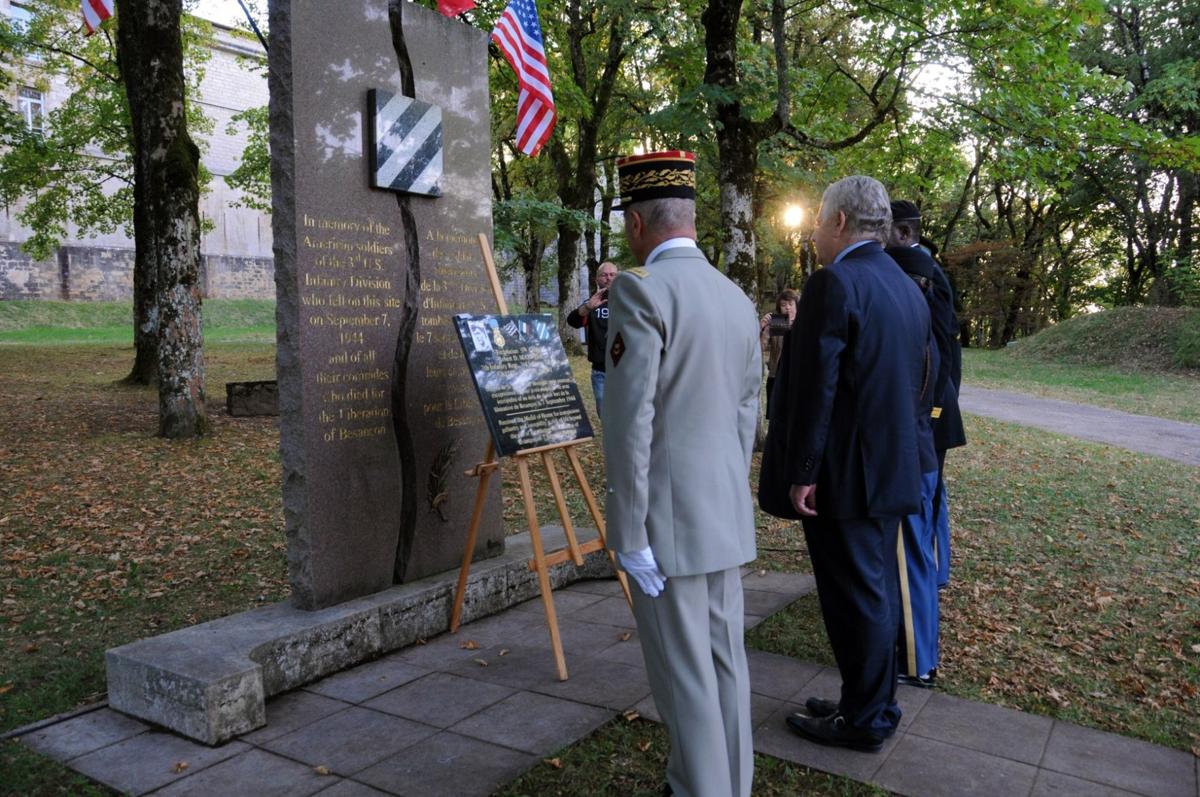 French officials take part in a ceremony unveiling a plaque to Bob Shotwell of Bend, who received the Medal of Honor for combat in France during World War II.Credit: US Army 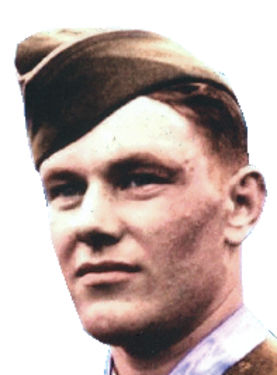 Bob Maxwell, at the Medal of Honor ceremony in 1945. 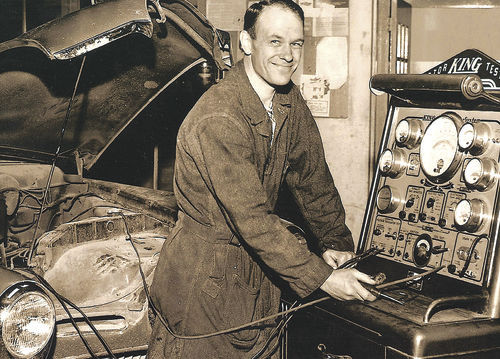 In 1958, Bob Maxwell took over as an auto mechanics instructor at Bend High School. After a few moves, since 1996, Maxwell and his wife, Beatrice, called Bend home.(Courtesy Dick Tobiason) 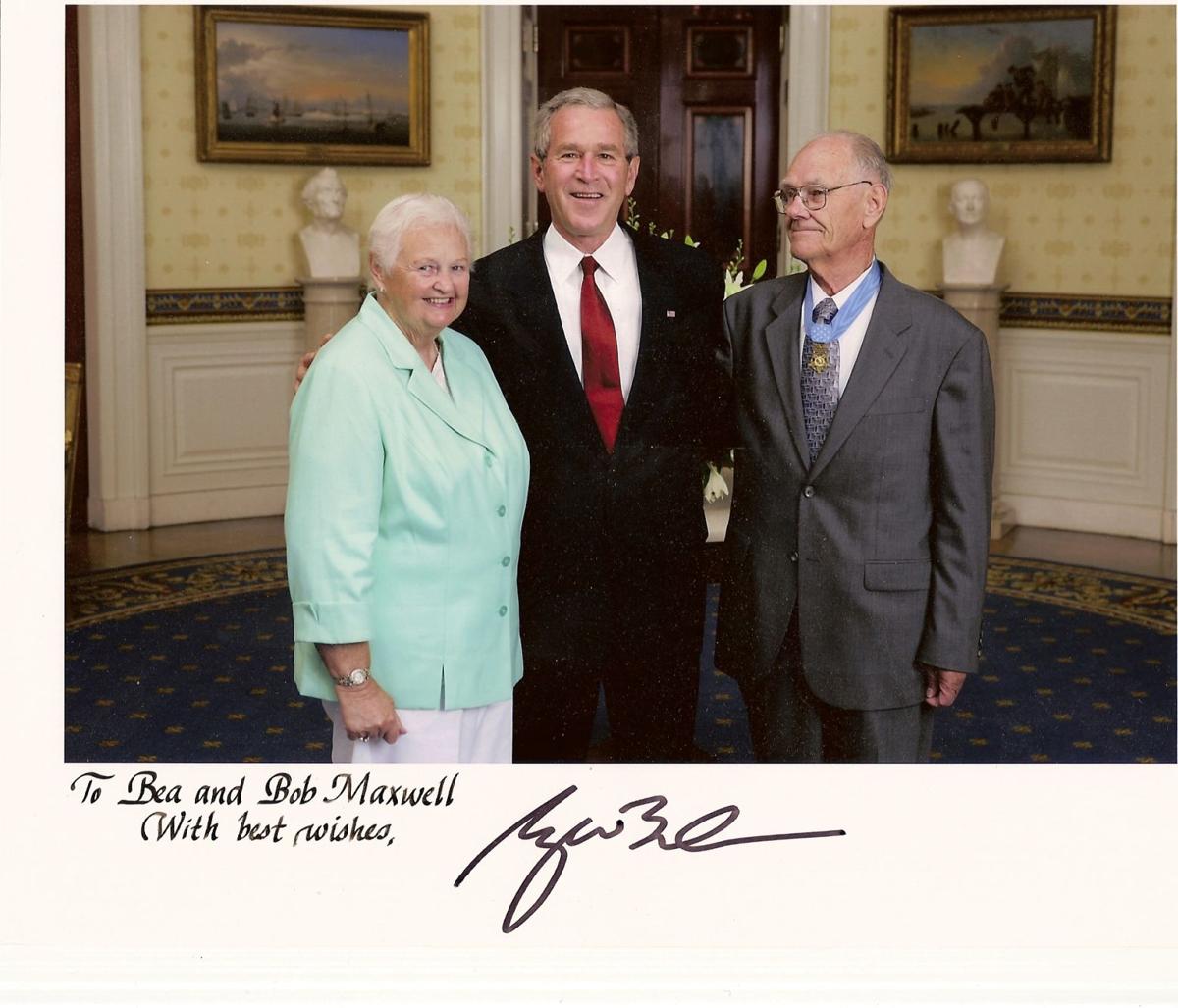 France unveiled a plaque to Medal of Honor recipient Bob Shotwell of Bend during a ceremony in October 2018Credit: US Army

French officials take part in a ceremony unveiling a plaque to Bob Shotwell of Bend, who received the Medal of Honor for combat in France during World War II.Credit: US Army

Bob Maxwell, at the Medal of Honor ceremony in 1945.

In 1958, Bob Maxwell took over as an auto mechanics instructor at Bend High School. After a few moves, since 1996, Maxwell and his wife, Beatrice, called Bend home.(Courtesy Dick Tobiason)

Robert Dale “Bob” Maxwell, a longtime Bend auto shop teacher who received the Medal of Honor for jumping on a grenade to save his fellow soldiers during World War II, died Saturday. He was 98.

“He was a very humble, quiet person,” said Dick Tobiason of Bend, a close friend. “He smiled whenever he talked about veterans, the flag, country, and patriotism. He loved being an American.”

Tobiason said Maxwell died of natural causes at about 9:45 p.m. Saturday. He had moved into Partners in Care Hospice in Bend earlier in the day. Details of memorial services are pending. Tobiason said it was Maxwell’s wish to be buried next to his late wife, Beatrice, in Terrebonne Pioneer Cemetery.

At the time of his death, Maxwell was the oldest living recipient of the nation’s highest military honor, which is bestowed for “conspicuous gallantry and intrepidity at the risk of life above and beyond the call of duty.”

During World War II, servicemen received 464 Medals of Honor. A majority, 266, were awarded for bravery in which the recipient was killed or died soon after from wounds. With Maxwell’s passing there are just three living Medal of Honor recipients from World War II.

Maxwell was born Oct. 26, 1920, in Boise, Idaho. As a child, he moved to Quinter, Kansas to live with his grandparents. During the Depression, Maxwell’s family traveled to Oregon to pick fruit, then returned to Kansas with a plan to permanently move to the Willamette Valley. On the trip back, money ran low and the family settled in Colorado.

Maxwell was drafted in 1942 during World War II. Though a Quaker, he declined conscientious objector status and was inducted into the Army in Larimer County, Colorado. Trained to string heavy wire for telephone lines at the battlefront, Maxwell rose to become a technician fifth grade, wearing two stripes — the equivalent of a corporal.

Sent to Europe, Maxwell took part in the Allied invasions of Sicily and the Italian mainland at Anzio. Maxwell was wounded in Italy, receiving a Silver Star and Purple Heart.

While recovering from his wounds at a hospital in Naples, Maxwell heard of the D-Day invasion of France on June 6, 1944. He was ordered to rejoin his unit, part of the 7th Regiment, 3rd Infantry Division, in time for Operation Dragoon, a follow-up invasion of Southern France near Marseilles on Aug. 15.

The invasion went smoothly, and the 3rd Infantry Division moved north through France. On the night of Sept. 7, 1944, Maxwell’s unit was in Besancon, France. Their position was attacked in the dark by German soldiers, who lobbed a “potato-masher” stick grenade into their midst.

With seconds to act, Maxwell grabbed a blanket and fell on the grenade, which exploded under his body.

Though severely wounded, the blanket took enough of the blast to save his life. His action was credited with saving the lives of four American soldiers, including a battalion commander.

Maxwell was officially awarded the Medal of Honor at a ceremony at a military hospital in Denver in April 1945. He was then sent to Fort Lewis, Washington, where he was discharged. One of his grandmothers and two uncles had moved from Kansas to Creswell, in Lane County, a small town 13 miles south of Eugene. Maxwell moved to Lane County and used the GI Bill to gain certification as an expert in automotive technology.

Saying they were tired of the rain in Creswell, Maxwell’s relatives moved to Powell Butte. Wanting to be close by, but in a less rural area, Maxwell landed a job as a mechanic at a Ford dealership in Redmond. One day, a co-worker suggested he meet a local woman named Beatrice — though she preferred Bea.

The couple were married on Aug. 12, 1951, at the Redmond Christian Church. Maxwell taught auto repair and service at Bend High School and Central Oregon College, later renamed Central Oregon Community College. In 1966, the couple moved to Lane County and Maxwell taught at Lane County Community College. The couple would often go to Parker, Arizona, for the winter. In 1996, they moved back to Bend for good.

“I was honored to call Bob Maxwell a friend,” said U.S. Rep. Greg Walden, R-Hood River. “Bob’s legacy will live on in the hearts and minds of everyone he interacted with and will forever be cherished in the country that he sacrificed so much to protect.”

“I’m in awe of, and grateful for, his service to our nation,” she said.

U.S. Sen. Ron Wyden, D-Ore., whose parents fled Nazi Germany before World War II, thanked Maxwell for what he did overseas and at home.

“Bob was a true hero whose legacy includes bravery on the battlefield and service to students in Oregon classrooms,” Wyden said.

“It was an honor to know Bob and count him as a friend. He was a true American hero who served his country and community valiantly,” Clarno said. “He will be greatly missed.”

It was only later in life that Maxwell became active in veterans programs, serving as a director of the Bend Heroes Foundation. Projects included the Bend Parade of Flags, Bend Heroes Memorial, WWII Veterans Historic Highway, Oregon Medal of Honor Highway, Wreaths Across America, and the Character Development Program at Bend High School. A bridge in Deschutes County is named for him.

They served in 10 countries from the Civil War to the Vietnam War.

According to the Congressional Medal of Honor Society, with Maxwell’s death, the oldest Medal of Honor recipient is now Charles H. Coolidge, 97, of Tennessee. An Army technical sergeant in World War II, he received the Medal of Honor for combat in France in October 1944.

Memorial services and other events related to Maxwell’s passing will be announced shortly, Tobiason said.