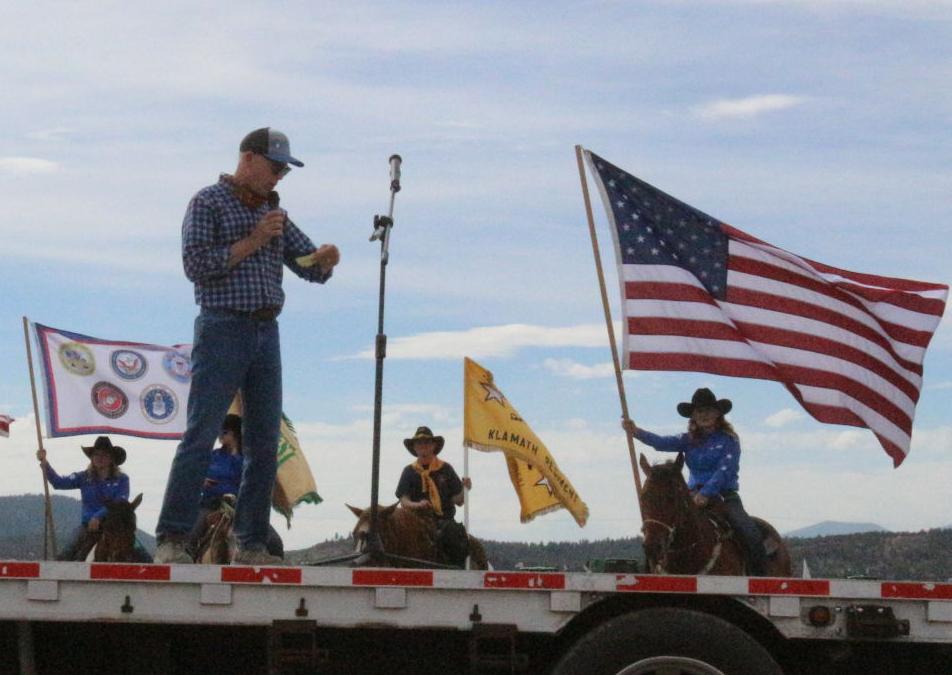 U.S. Rep. Greg Walden, R-Hood River, speaks to about 2,000 attendees of the “Shut Down and Fed Up” rally in a field in Midland on Friday. 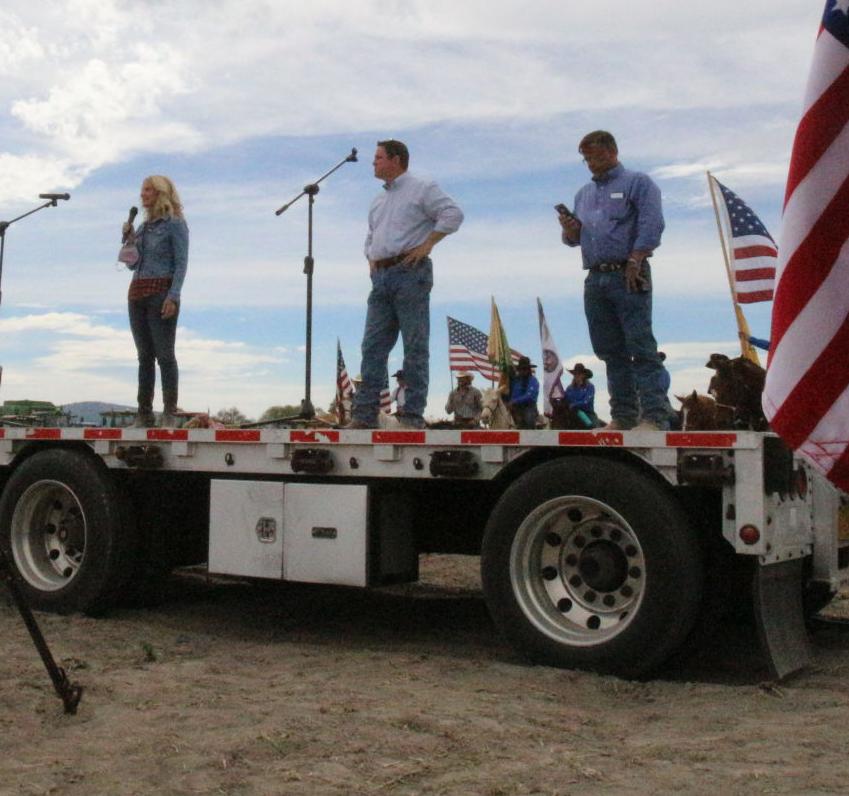 Klamath County Commissioners Kelley Minty Morris, Derrick DeGroot, and Donnie Boyd speak to about 2,000 attendees of the "Shut Down and Fed Up" in Midland, Ore. 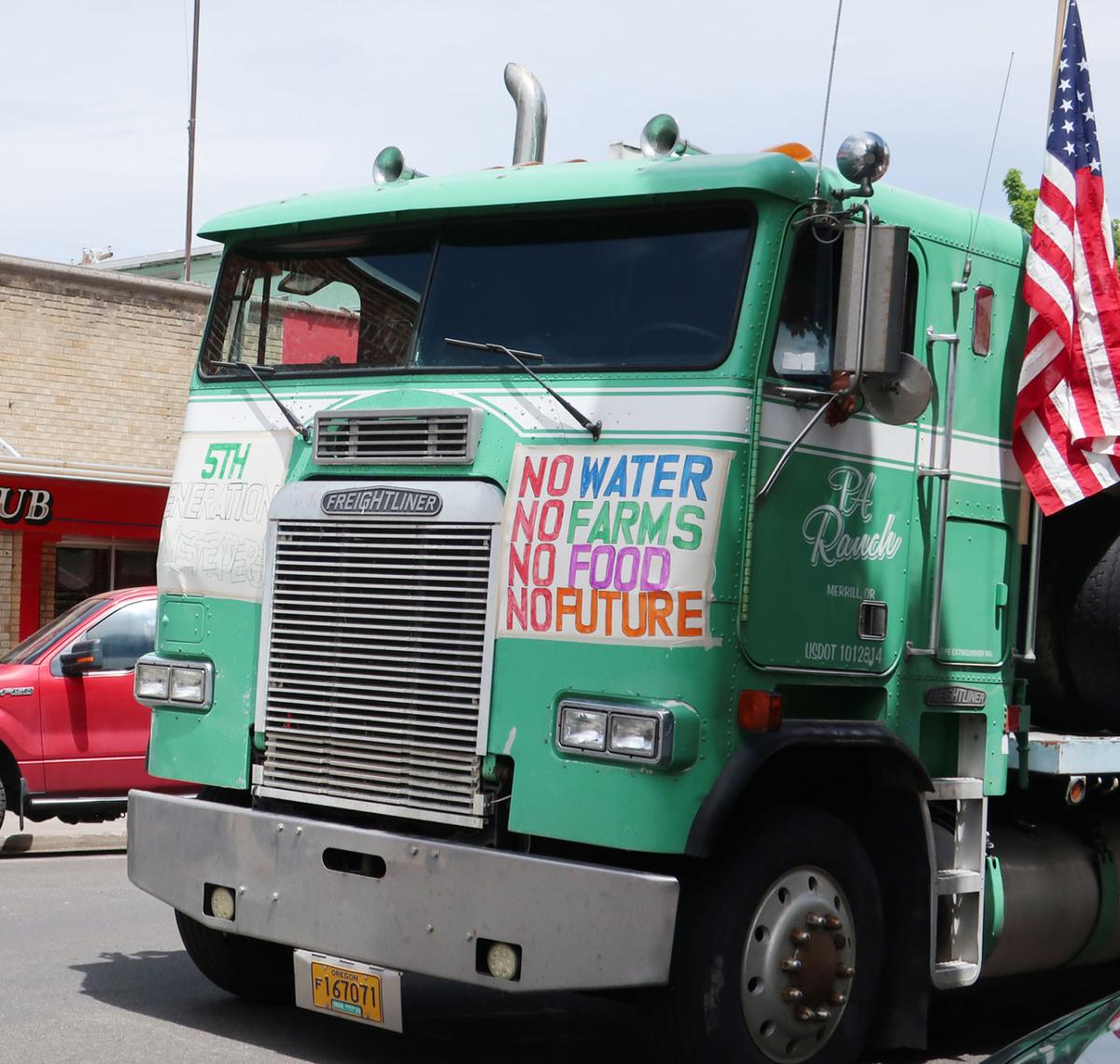 Need they say more? “No water, no farms, no food, no future.”

U.S. Rep. Greg Walden, R-Hood River, speaks to about 2,000 attendees of the “Shut Down and Fed Up” rally in a field in Midland on Friday.

Klamath County Commissioners Kelley Minty Morris, Derrick DeGroot, and Donnie Boyd speak to about 2,000 attendees of the "Shut Down and Fed Up" in Midland, Ore.

Need they say more? “No water, no farms, no food, no future.”

MIDLAND — By the thousands, they rolled through the Southern Oregon countryside in tractors, hay trucks, log trucks, pickups and minivans, their hand-painted signs greeted by supportive passers-by who agreed with the message of Friday’s “Shut Down and Fed Up” rally: the water problems that for decades have plagued the region and its farmers must be resolved.

The problem has been around for decades. In 2001, John Crawford watched as U.S. Rep. Greg Walden poured a bucket of water into the A Canal as part of the Bucket Brigade, a demonstration stemming from the water shutoff that year.

Crawford, who farms about 3,000 acres in Tulelake, California, with his brother and son, was the first speaker at the “Shut Down and Fed Up” tractor rally in Midland. Standing on a flatbed trailer, he addressed a crowd of more than 2,000 people with the bucket from the Bucket Brigade hoisted up for all to see.

Crawford said that in 2001, he was hopeful that he would not experience the same situation again. This year, however, the crisis is much more serious than in 2001.

The Klamath Project’s allocation this year is 80,000 acre-feet — 23% of the 350,000 acre-feet considered a full allocation. Worse yet, they say, the cutback was announced after many crops had been planted.

“Today my hope is that somehow my 4-year-old triplet grandsons will have the opportunity that was afforded my brother and myself by our grandfather and father. Without change, that hope will surely fade away,” he told the crowd, full of attendees from the all-day convoy.

The “Shut Down and Fed Up” convoy started Friday morning in Merrill and covered more than 20 miles through downtown Klamath Falls and finally to Midland. The convoy included participants from Southern and Central Oregon and California. The convoy and rally served as a more far-reaching public demonstration with which organizers aimed to attract national attention from President Donald Trump.

Farmers were initially told in April by Bureau of Reclamation they would receive 140,000 acre-feet of water. Project irrigators can now expect only the 55,000 acre-feet that remains.

Walden, a Hood River Republican, wasn’t carrying a bucket Friday, but he shared plans to carry the concerns of farmers to the White House regarding the early end to the Project irrigation season and an ongoing struggle with water issues in the Basin.

As vehicles lined up at a field in Merrill Friday morning, Walden said he’s been in touch with White House Chief of Staff Mark Meadows about the situation.

“They want to be helpful,” Walden said of the Trump administration. “I’m sending his chief of staff photos and videos. I served with him in the House. … We know each other pretty well.”

He said there needs to be a “reset” for the Project moving forward, though it’s unclear right now what that could look like.

“It’s complicated or we would’ve solved it,” Walden said.

Later on, Walden promised to work toward that solution, even as his term comes to an end in November. He’s retiring after 21 years in the U.S. House.

“We ought to have water flowing for farmers throughout the season,” Walden said from the main stage. “I’m committed to that.”

Klamath Project farmers could collectively request between $50 million and $75 million in aid from the federal government to offset losses they will face when the water runs out.

Officials in Modoc and Siskiyou counties in California are working with the Oregon and California congressional delegations and the USDA.

Michael Kobseff, chairman of the Siskiyou County Board of Supervisors, signed a letter to Agriculture Secretary Sonny Perdue and Undersecretary of Farm Production and Conservation Bill Northey requesting aid for the Klamath Project.

But Klamath Water Users Association Executive Director Paul Simmons, who drove a tractor in the convoy, said the water relief programs are a “distant second” option for water users. More water is preferred.

“There are some existing funds from the DRA (Drought Response Agency) to do its programs ... but that will be far too little if we don’t get a lot more water,” Simmons said.

“We’re just kind of working on all fronts for whatever we can do,” Simmons said.

U.S. Rep. Doug LaMalfa, R-Calif., said he and Walden will be fighting to provide more water for farmers to finish their irrigation season. LaMalfa, who is a rice grower south of Chico, Calif., also drove a tractor in the 20-plus mile convoy.

LaMalfa emphasized that the Klamath Project was created over 100 years ago for one purpose and that was for agriculture for those who came and settled in the Basin and were given the opportunity to farm.

“We’ve got about two and a half weeks to make something happen in this crop year,” he added.

“We’re going to fight for getting the full allocation back right now so you guys can at least finish the season at this meager 40% of your true (water) allocation.”

“We’re going to take what is rightfully ours,” LaMalfa said.

Bob Gasser, who was involved in organizing the event, said the day was full of mixed emotions, knowing many farmers would prefer to be farming instead of holding a rally.

“Days like today, you really appreciate the community that we live in because they came out strong, with the same message: Let’s do better. Let’s fix it,” Gasser said.

“It was a happy moment seeing everybody get together but it was sad that we had to get together.

“Everybody you saw smile today — they’re going to be worried about how to pay their bills,” he added.

But the support that swelled for farmers won’t be forgotten, according to Gasser.

“We will always remember how the community came out to support us today,” he said.