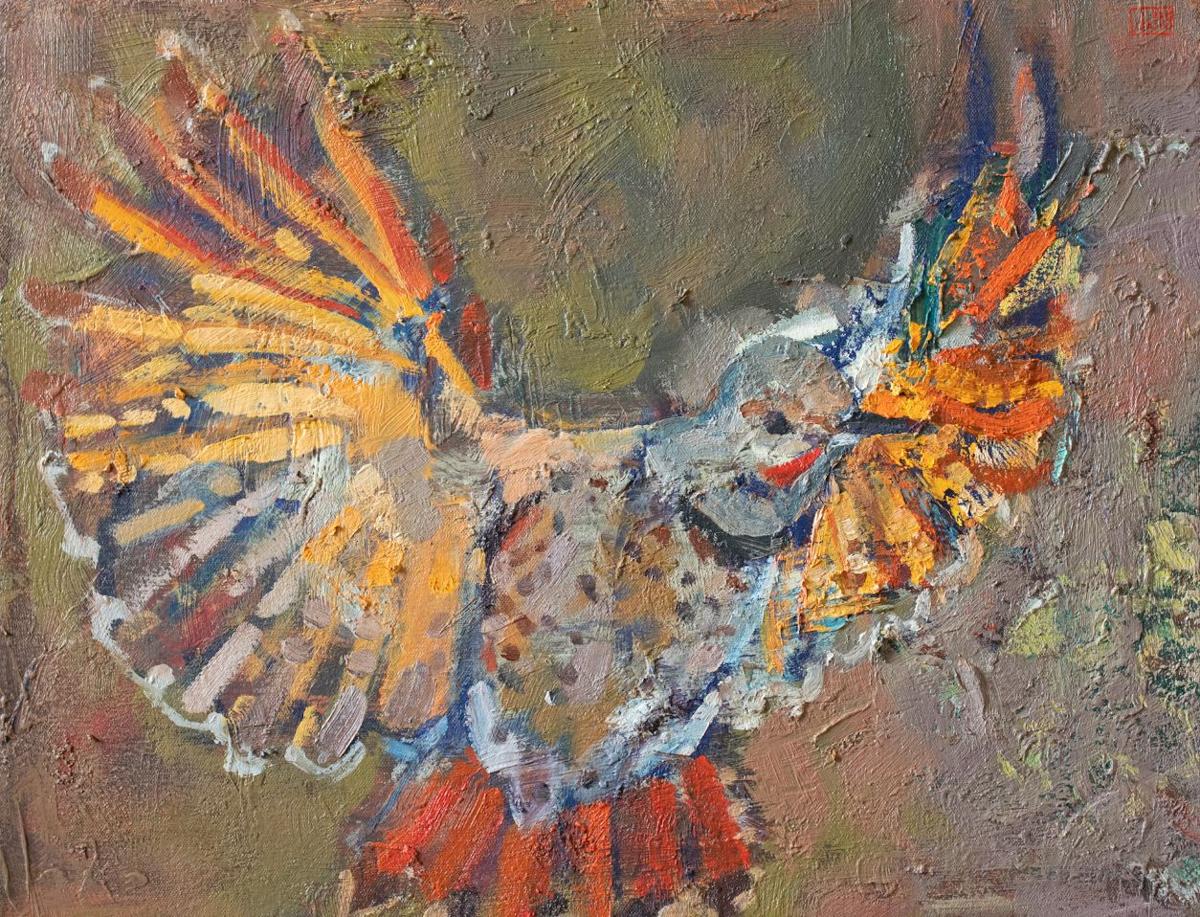 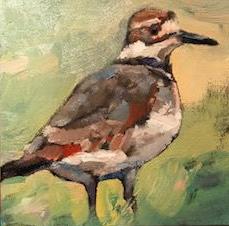 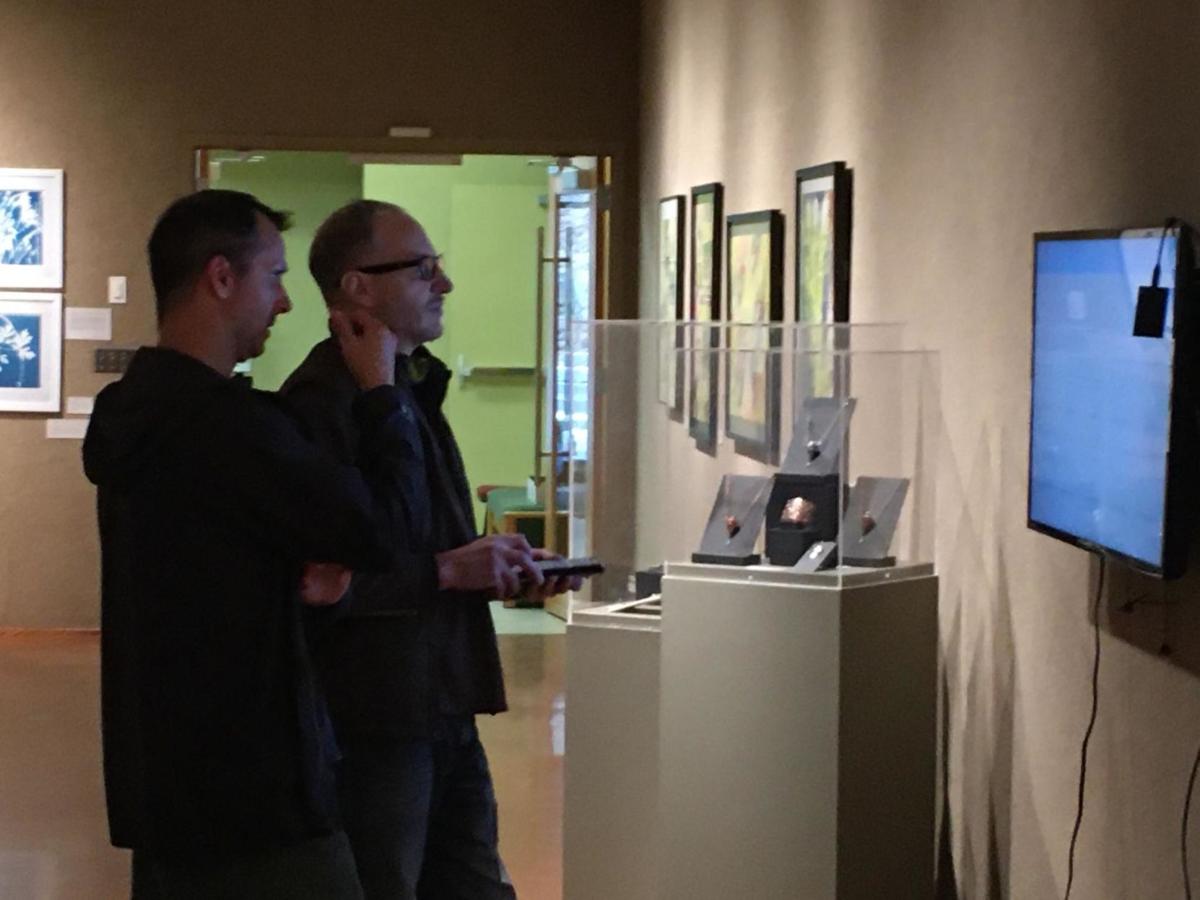 Back when he was a working baker, Jacob Joseph Norris aspired to paint full time. But as a married father of three boys — now ages 7, 10 and 13 — Norris also knew he had to find his artistic niche.

“I told myself I wouldn’t do the whole support my family on painting alone until I found a niche that I wouldn’t get tired of painting, and that people wanted,” Norris said.

It turns out that niche was, and is, richly textured, impressionistic oil paintings of birds: water birds, birds of prey, birds migrating, in flight, perched on branches, alone, in pairs, in flocks. The opportunities to capture the movement and colorful feathers affords him endless opportunities to push himself and his abilities and continually make new discoveries.

Back before he began to specialize in these textured, impressionistic oils of birds, Norris painted landscapes, too.

It was his parents who helped him notice his niche, which it so happens he was already painting. Whenever Norris had an exhibit going up, he always made sure to include a small bird painting.

“Right before, I’d always paint a little bird, just in case nothing (else) sold. And that was usually the first thing to sell,” Norris said. “And my folks … were like, ‘Well, you could just paint birds.’”

Norris took the advice to heart, as evidenced by his show of 27 works at Central Oregon Community College’s Barber Library. It’s actually one of three exhibits of his paintings that Norris is exhibiting this month, with the others at Lone Pine Coffee Roasters and Found Natural Goods in downtown Bend.

“When I graduated, (Roth) went full-time artist, and he opened up two apprentice spots,” one of which went to him, Norris explained Monday in the Barber Library Rotunda, where his works hang on two floors. “We did it all. We painted together. We stretched canvas. We made our own fine art frames, went to plein air paint-outs all over Oregon, we had shows in his studio space. (Roth) is just one of the best. A good friend.”

Norris also took art classes at COCC, including some with the recently retired Bill Hoppe, who later had Norris come to his classroom as a visiting artist. Norris believes everyone has a bird story, and he enjoys interactions with people who “open up and share their life experiences,” he said. “A lot of times people come up to me and say … ‘I don’t know why this is happening, but I’m remembering all this stuff.’”

For instance, last weekend, when he was hanging the show, a Barber Library patron told him one of the paintings reminded him of his father.

“That’s really meaningful to me. Oftentimes it corresponds with kind of my personal experience, too,” he said. “That to me is one of the most fulfilling things. It keeps me going. I look to that when I’m feeling stuck.”

Norris is now “living off my paintings,” he said. “This past year was my first year, and I paid rent on time. Paid all the bills. I’ve got a good momentum.”

Cravis and Factor were on hand Friday at the gallery, which is open 9 a.m. to 3:30 p.m. weekdays. Factor’s contributions include a painting of a girl enjoying a pretzel amid the rush of the Macy’s Day Parade, and sketches for a series of paintings he’s working on based on photos his father took when he was in Vietnam from 1969 to 71. His father was overseas when Factor was born in 1969.

“When he was in Vietnam, he took a lot of pictures. He was a big photographer back in those days,” Factor said. “He never talked about it until fairly recently, and then a few years ago he and I were chatting, but as a kid I remember him always doing these slideshows. … I remember vividly these amazingly gorgeous images of Vietnam.”

About five years ago, he asked his father if he could see the images again.

“At this point in my life, with where things are at with my family, and the weird parallels between Vietnam and what’s going on now … I thought it might be an interesting thing to circle back to my origins,” Factor said.

Cravis has a trio of pieces in the exhibit, including “T-Immobile,” for which he set up a camera and shot film of abandoned T-Mobile booths last summer when he was in Budapest, Hungary. The resulting video loop plays on a TV hanging in the gallery, accompanied by music — monks chanting mashed up with Jim Croce’s “Operator (That’s Not the Way it Feels)” slowed down and played backward.

“These are looking at booths around the city,” he explained. “I’m imagining there’s hundreds of these, and I guess what I was noticing was the real estate in Budapest,” which is extremely expensive. “I was thinking these (and) at the real estate value in Budapest. They were sort of occupying really valuable space. And T-Mobile just left them there.”

Some of the booths lack doors. Others still have phones, albeit defunct phones. Citizens of Budapest use them for graffiti canvases, garbage cans, “impromptu toilets,” Cravis said. One even has a cell phone ad on its outer wall.

In one scene, a man arrives and begins cleaning one of them. He appears to be a citizen behaving well.

“I was just shooting this one, and he just started cleaning up. I don’t know if he’s a vigilante, good Samaritan, or if he’s on somebody’s payroll,” Cravis said. “I had set up (the camera), and he was just doing his thing, and he was very serious about it, like it’s a mission.”

Cravis said the piece was partly born just from being in Europe.

“When you go to, especially, a residency in a different country … it’s nice to choose a project that sort of has a component of exploring the city built in. So I just took the opportunity to go to the different neighborhoods and find these phones.”

What: "Bird Stories: Flying with Nature," by Jacob Joseph Norris