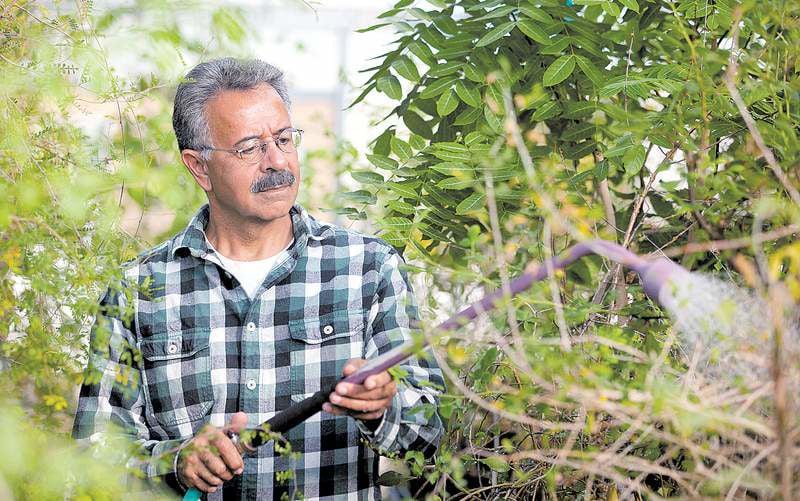 Jason Eslamieh waters the plants on his property in Tempe, Ariz. Eslamieh's book “Cultivation of Boswellia: Sacred Trees of Frankincense,” contains tips he has perfected since starting Miniatree Garden, a nursery focused on succulents from areas like South Africa and Somalia, with an eBay storefront in 2007. 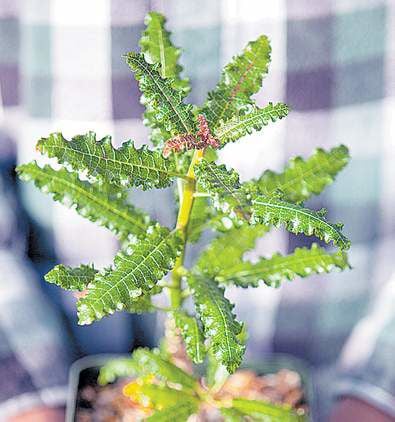 “Boswellia is only happy in its native environment. And even then, it’s not as happy as it could be,” says Marc Hachadourian, who manages the Nolen Greenhouses at the New York Botanical Garden.

Jason Eslamieh waters the plants on his property in Tempe, Ariz. Eslamieh's book “Cultivation of Boswellia: Sacred Trees of Frankincense,” contains tips he has perfected since starting Miniatree Garden, a nursery focused on succulents from areas like South Africa and Somalia, with an eBay storefront in 2007.

“Boswellia is only happy in its native environment. And even then, it’s not as happy as it could be,” says Marc Hachadourian, who manages the Nolen Greenhouses at the New York Botanical Garden.

The holiest plant of the Christmas season may be a raggedy shrub with peeling bark that seems to grow best in a dusty backyard in Tempe, Ariz.

This is Boswellia sacra, better known as the frankincense tree. The shrub’s gum resin is one of the three biblical gifts that the wise men bestowed on the infant Jesus.

Until recently, Americans who wished to cultivate their own frankincense could only hope for another biblical house call. Marc Hachadourian, who manages the Nolen Greenhouses at the New York Botanical Garden, describes frankincense seed as hard to find and harder still to grow.

“In horticulture, there are a few plants that we joke about that have a miserable life,” he said. “Boswellia is only happy in its native environment. And even then, it’s not as happy as it could be.”

Today, a seeker can follow a bright star (OK, an eBay storefront) to a nursery called the Miniatree Garden, in a two-bedroom house near Arizona State University. Here, across the street from a shabby apartment complex advertising move-in specials, lies an oasis for more than 3,000 exotic plants representing 300 species.

One of these is frankincense. Another is a rangy assemblage of vicious thorns, called myrrh, a second gift of the Magi. (Commiphora myrrha is “scruffy” and “not very personable,” Hachadourian said.)

This efflorescence in the Sonoran Desert is the vision of a 61-year-old architect named Jason Eslamieh. Yet for all his labors, the garden seems to exist almost by chance. How did a Bahai student from Iran with the given name Mohammad land in small-town Indiana, marry a Mormon by way of Texas and Mexico, score a bag of seeds from an American consultant in Yemen and become a guardian to the sacred plants of Christendom?

The answer is what could only be an American Christmas story.

A good time to find Eslamieh working in the garden is anytime at all. He lives with his wife a few miles from the garden, down the street from his dear granddaughters. But for a couple of weeks last month, he was also sleeping on an air mattress at the Miniatree office while he tried to turn a snoozy Rottweiler puppy named Sacra into a fearsome guard dog.

“We got broken into twice that we know of,” Eslamieh said, walking through a French door into the half-acre backyard. “I don’t care about material things. They could come here and steal my computer. I don’t care.”

But it was intolerable to imagine the plants being vandalized. “Twenty years of work into the three genera of the Burseraceae is something I cannot replace.”

It has been no mean feat to assemble all 19 species of the genus Boswellia. (Eslamieh knows of no one else in the world who cultivates the full set.) Five or six of these species are endemic to the island of Socotra, a UNESCO World Heritage site, near the mouth of the Gulf of Aden, with a ban on botanical exports. Other Boswellia reside in the anarchic hinterlands of Yemen and Somalia.

Having summoned the Boswellia to his sanctuary, he now has to keep the plants contented. In his new book, “Cultivation of Boswellia: Sacred Trees of Frankincense,” Eslamieh credits his knack for horticulture to his father, who kept an exquisite garden in Yazd, a provincial capital in central Iran. In the family orchard, he said, “I learned how to graft when I was only 6 or 7 years old.”

Boswellia sacra is not much of a looker. While Sacra the dog napped on the patio, Eslamieh inspected a head-high shrub, started from seeds field-collected in Yemen. The paired leaves appeared small and crinkled. But the exfoliating bark was something else again: ocher and papery, like a sheet of baking parchment scorched in the oven.

Eslamieh appreciates the plant less for its pulchritude than its deeper botanical riddles. He can predict rain from the swelling of the nodes along the branches. When the barometric pressure drops, he said, the Boswellia “take every opportunity to grow, to flower, to set seeds.”