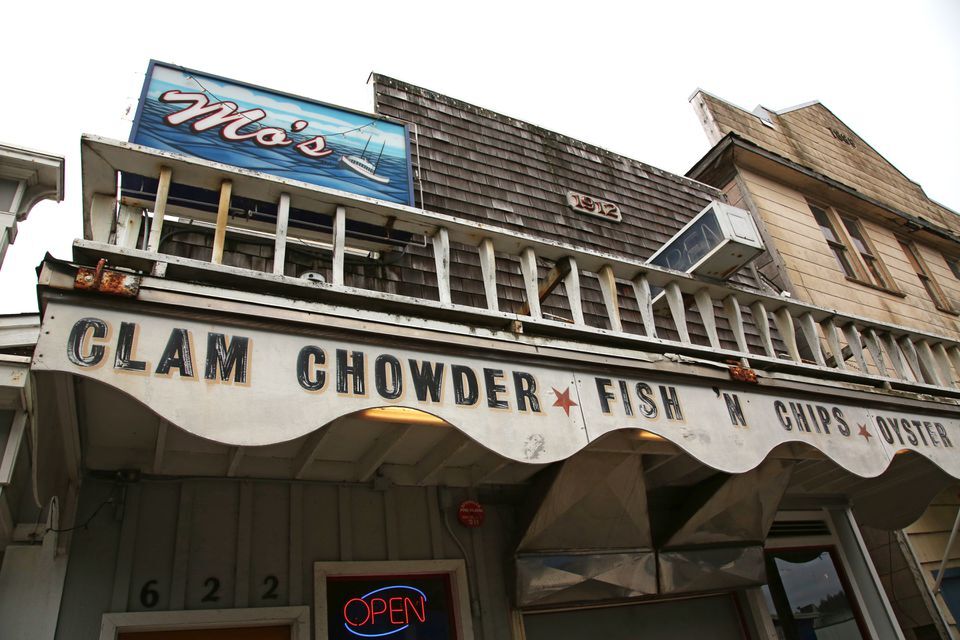 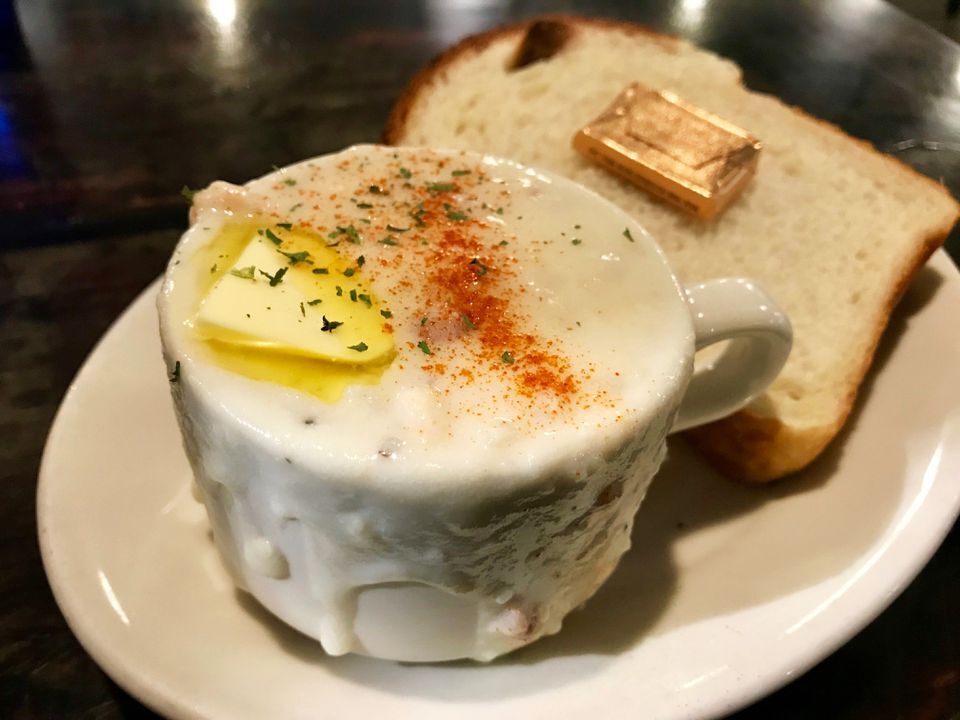 A cup of clam chowder at the original Mo's Seafood and Chowder in Newport. 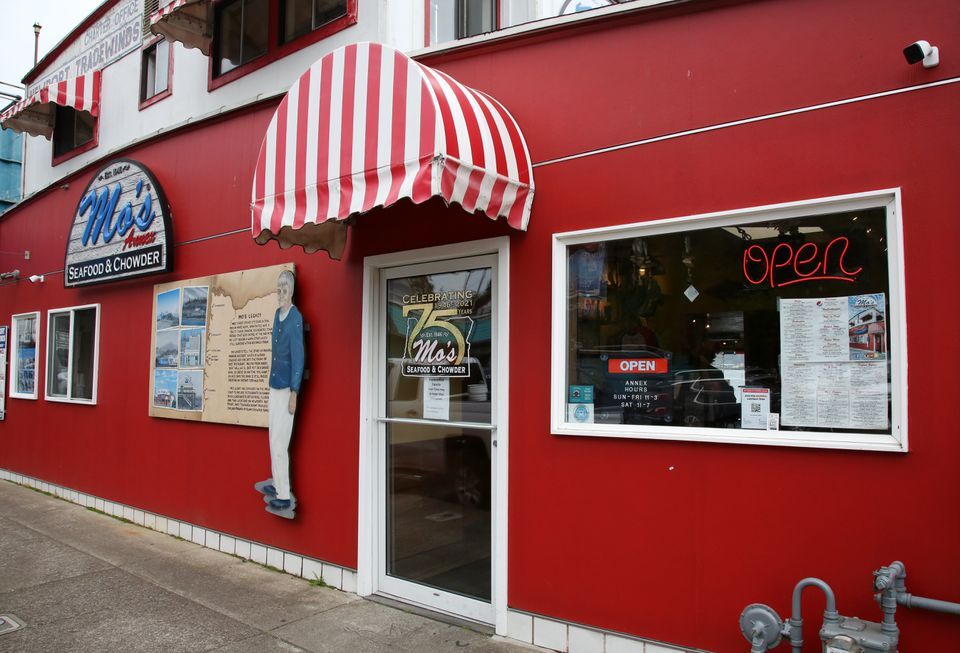 Mo's Seafood and Chowder's Newport Annex restaurant is just across the street from the original location in Newport's historic bayfront on the Central Oregon Coast. Mo's is celebrating its 75th anniversary in 2021. 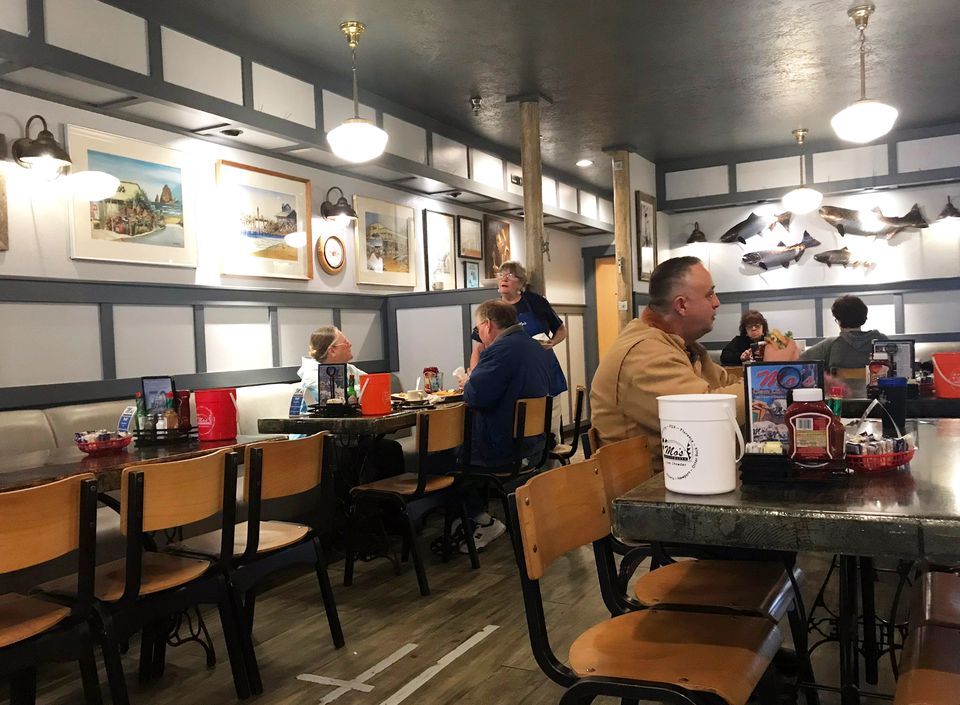 PHOTOS, from top: Inside the original Mo’s Seafood and Chowder in Newport, celebrating its 75th anniversary in 2021. The original location of Mo’s is still in business in Newport’s historic bayfront on the Central Oregon Coast. The simple cup of clam chowder is key to the history of the restaurant. Jamie Hale/The Oregonian 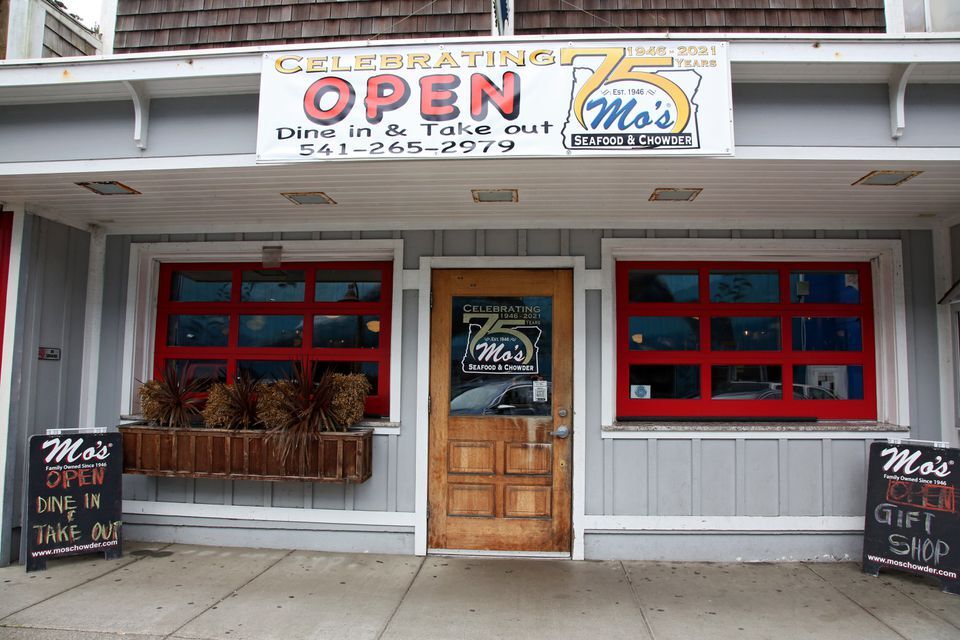 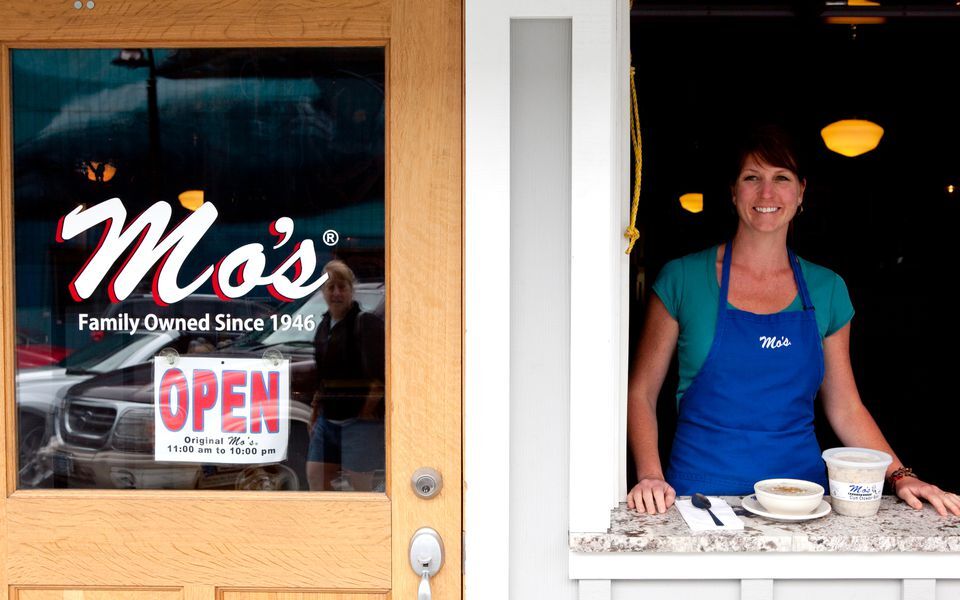 Gabrielle McEntee Wilson, granddaughter of Mo Niemi, stands with a bowl of Mo's clam chowder and the base on Thursday, July 14, 2011, in Newport.

A cup of clam chowder at the original Mo's Seafood and Chowder in Newport.

Mo's Seafood and Chowder's Newport Annex restaurant is just across the street from the original location in Newport's historic bayfront on the Central Oregon Coast. Mo's is celebrating its 75th anniversary in 2021.

PHOTOS, from top: Inside the original Mo’s Seafood and Chowder in Newport, celebrating its 75th anniversary in 2021. The original location of Mo’s is still in business in Newport’s historic bayfront on the Central Oregon Coast. The simple cup of clam chowder is key to the history of the restaurant. Jamie Hale/The Oregonian

Gabrielle McEntee Wilson, granddaughter of Mo Niemi, stands with a bowl of Mo's clam chowder and the base on Thursday, July 14, 2011, in Newport.

Dylan McEntee had been on the road for nearly 10 hours, pulling a trailer loaded with Mo’s chowder and cobbler en route to Utah where customers awaited their orders. Taking a rest stop with his family near Eureka, Nevada, McEntee heard a knock on the window, and turned to see the sheriff. It didn’t look good.

“He asked me, ’’Do you have chowder in that trailer?’” said Dylan, whose great-grandmother Mo Niemi founded Mo’s Seafood and Chowder. “I said, ‘I do.’ He said, ‘Oh, my wife would kill me if I didn’t buy some.’”

It was one of the many memorable moments from a spring of road trips forced by COVID-19, a Hail Mary move designed to save the family business that began in Newport in 1946. What should have been a year of preparation for Mo’s 75th anniversary celebration, became instead a year of worry, doubt and the very real possibility that Mo’s wouldn’t see that milestone.

“In March 2020, we had to lay off almost every single person,” said Gabrielle McEntee, Mo’s great-granddaughter. “This was probably the most heart-breaking day of my life as a restaurant owner.”

It was think quick or turn off the lights.

“The cool thing about Beach Bundles is we always donated something to that town … to a food share or food bank,” Gabrielle said. “From March until the end of June, we traveled all over Oregon, Idaho, Washington, Utah. The sales literally saved the business.”

Not just the business, but an Oregon legacy.

If you’ve spent any time in Oregon, you probably know the history of the original Mo’s. It begins in the 1940s, when Mo (short for Mohava) Niemi opened a small diner on Newport’s Bayfront.

It was a locals’ kind of a place, featuring a menu rich with comfort food like chicken-fried steak and 90-cent spaghetti and meatballs. But not much seafood. “Seafood back then was for the poor people,” McEntee said. “That’s what they ate every day because it was a seafood town.”

Then, in the 1970s, “Sometimes A Great Notion” starring Paul Newman and Henry Fonda was filmed in Lincoln County, and the celebrity cast discovered Mo’s. Tourists also started flocking to the place. What drew them was the chowder, which happened to be made by a shifting crew of three competitive cooks who made variations of white New England style clam chowder. Soon, diners started planning their visits to Mo’s based on whose chowder was up that day.

“We had three different chowders going,” Dylan said. “Mo pulled all the cooks into the kitchen and told them we are going to come up with one recipe and that’s what we’re going to go with. When people come to eat clam chowder, they are going to know what they’re getting.”

Decades later, the recipe remains the same. The family still owns and operates Mo’s Seafood & Chowder restaurants — two on the Bayfront and one in Otter Rock. The other namesake restaurants are owned by a corporation Mo entered into an agreement with in the late 1970s.

As troubling as the past year has been, it also made for some amusing stories destined to be passed on for years. There were the people who greeted McEntee and his crew on the road, sharing stories of their time at Mo’s.

There was the officer in the Idaho parking lot, whom Dylan approached thinking “to soften the blow.” “He said, ‘Oh no, I’m just here to pick up my chowder.’ His wife had made a big order.”

And it wouldn’t be the last time the crew encountered the sheriff in Eureka. As McEntee and his wife, Celeste, were returning from yet another trip, she texted their new friend—a former Oregon State University baseball player— to let him know they had 300 quarts of chowder and 60 cobblers remaining from their deliveries.

“He said, ‘Show up at the fire station in Eureka. I already have all of that sold.’ It was 1 o’clock in the morning and it seemed like the entire population of 300 was there,” Dylan McEntee recalled. “They bought everything we had left.”

It was a gratifying experience both for the McEntees and the people hundreds of miles from Mo’s. “It made them feel they were being thought of,” Dylan McEntee said. “Some people told me they hadn’t been able to make it to the coast for years because of their health. They were just so grateful we would come to their town and deliver. It was really touching.”

And it was made possible not only by the people who turned out to order their Beach Bundles from afar, but by the clan at home, led by Cindy McEntee, president of the business, mother to Gabrielle and Dylan, and very close to her late “Granny Mo.”

On March 18 when it became obvious it could no longer be business as usual, Cindy McEntee picked up the phone. “I said, ‘We’re going to have to pull our socks up and work.’ And then we just opened up for takeout, and I started baking pies again.”

Gabrielle’s husband, Shelby Knife, a firefighter, turned out to have a knack for making dough, while Celeste took on the marionberry filling. Some of the grandkids waited on customers at the door while others filled containers with garlic cheese butter, or folded boxes for the cobbler.

“We were all baking bread,” Cindy said. “Hundreds of loaves a day. The daily amount of cobblers was 90, until we bought new carts and then it was 120. We did everything we could. It was really—it was really kind of fun.”

It also called to mind another time when Mo’s future was questionable, a time when Cindy saw no choice but to take charge. In 1975, Mo’s had been closed for six months as crews worked to remodel the Bayfront building. Workers had torn out the back and walls and added a formerly nonexistent foundation. It was to be a three-month job, but nearly seven months into it, the remodel remained unfinished.

“My grandmother just broke down,” Cindy said, her voice shaky now. “She lost faith in the whole thing. They had literally ripped our building apart. We missed Christmas and were missing spring break. When she broke down, I called the head waitress and head cook. I said, ‘We have to get this restaurant open. I don’t care if there is no elevator, we’ll carry it up the steps. We put the restaurant back together in three days. ... I broke my toe moving the grill. But my grandmother got it. That is kind of what happened with COVID.”

But despite COVID-19 and all the hardship it’s entailed, the 75th anniversary celebration will go on — albeit a bit more quietly. Plans call for scratch-off tickets to dine-in and take-out customers for prizes to include free desserts, bowls of chowder and gift certificates. One day a month, 20% from takeout orders will be dedicated to a local nonprofit. And, coming soon, guests can expect a special beer and T-shirt offered in collaboration with Rogue Ales, as well as 75th Anniversary T-shirts.

“We just as a family did it, Cindy said. “My granny would be down there expecting us to do exactly what we are doing. She would be really proud.”