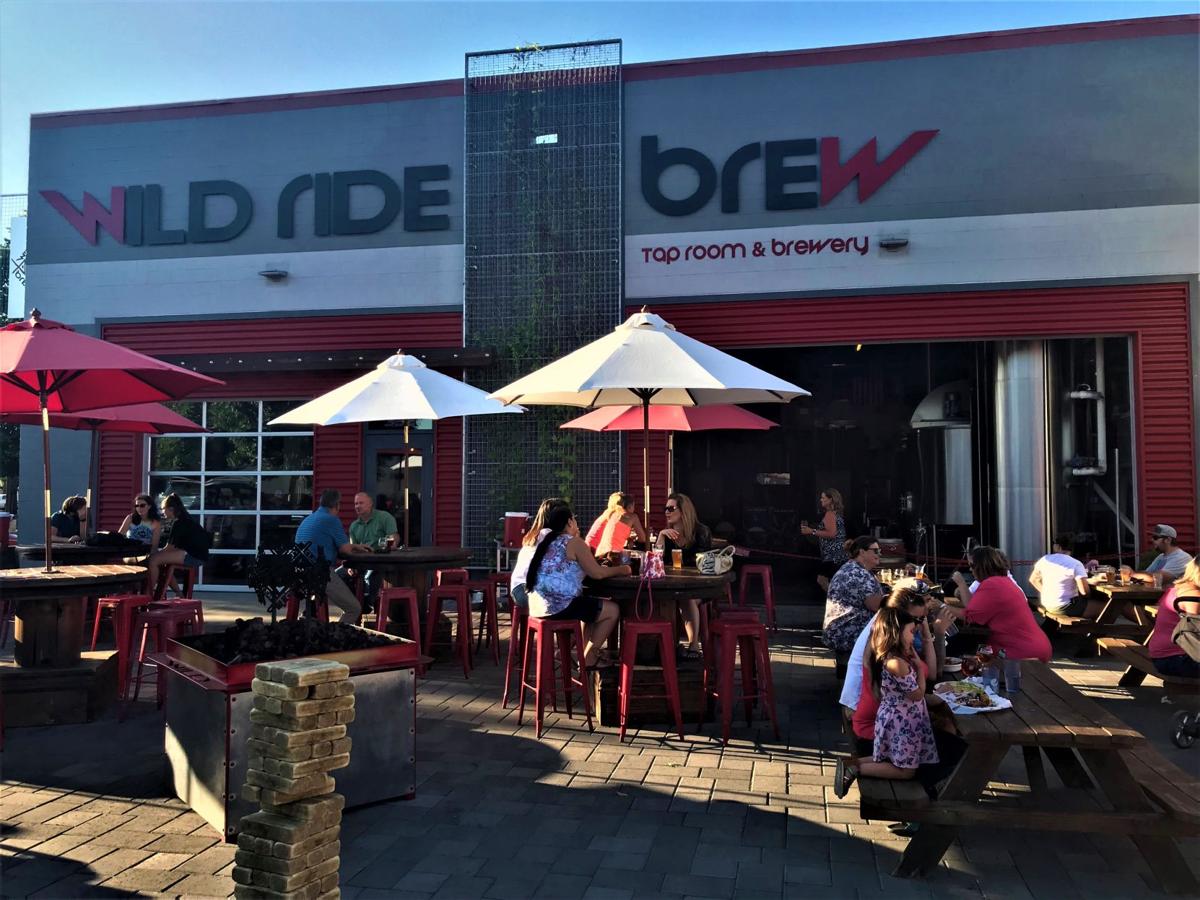 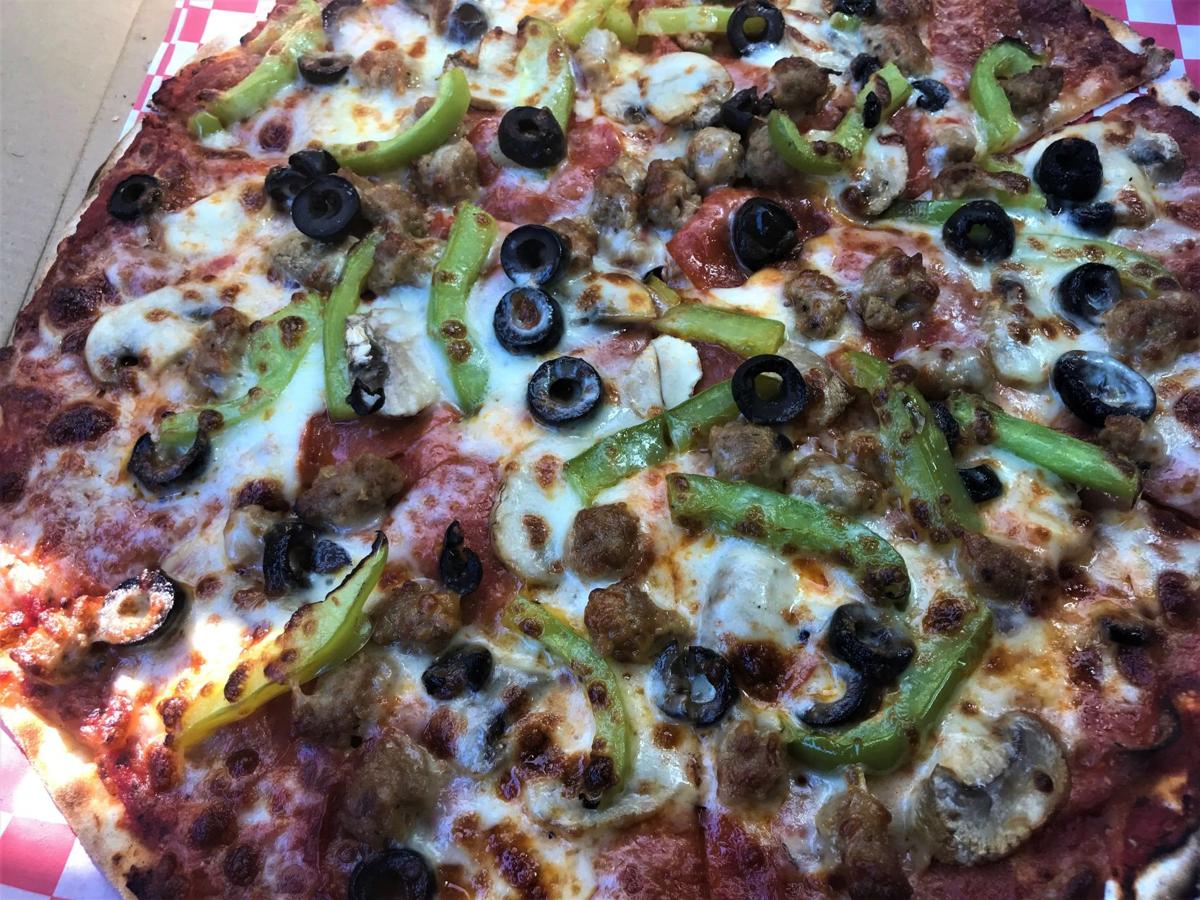 The Classic is a popular meal choice at the Red Road Pizza Co. (John Gottberg Anderson / For The Bulletin) 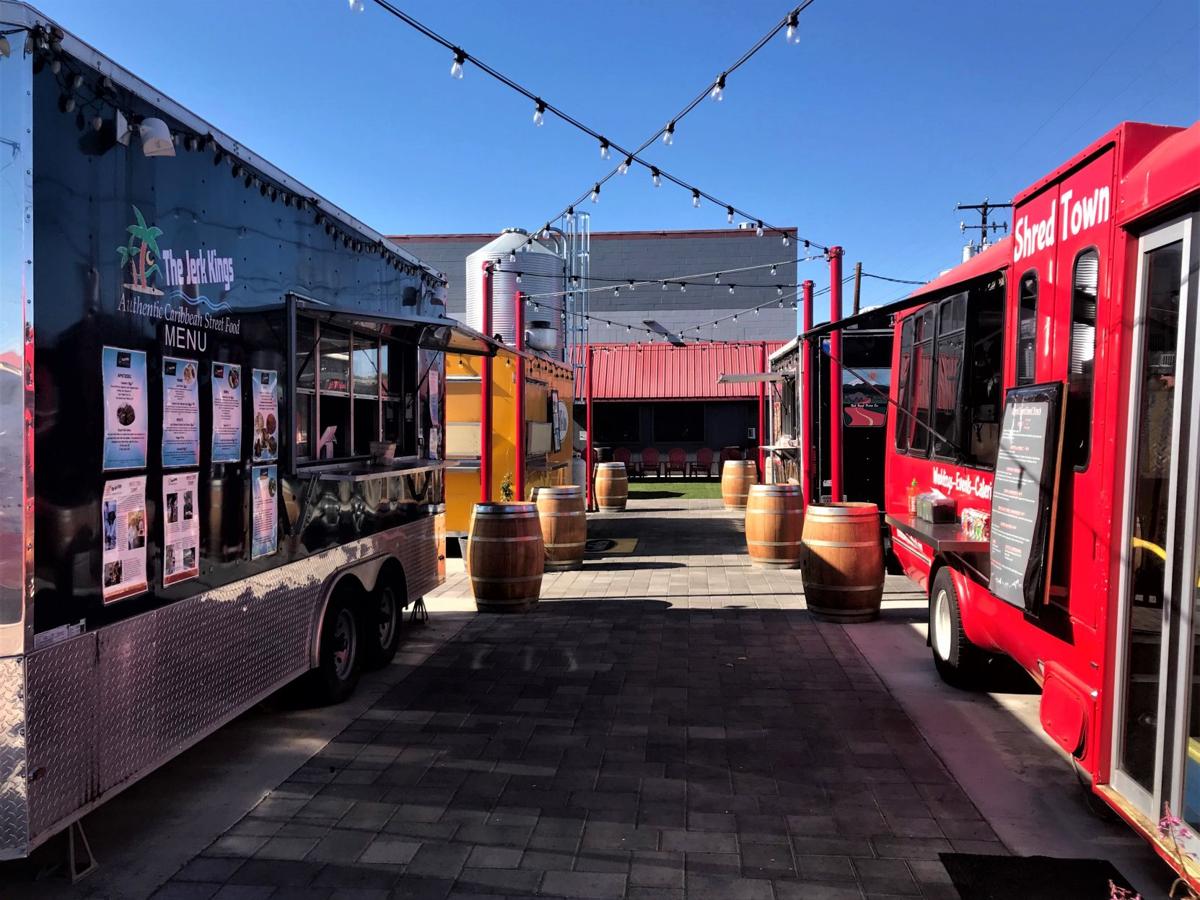 A quartet of food trucks are tightly packed at Wild Ride Brewing. 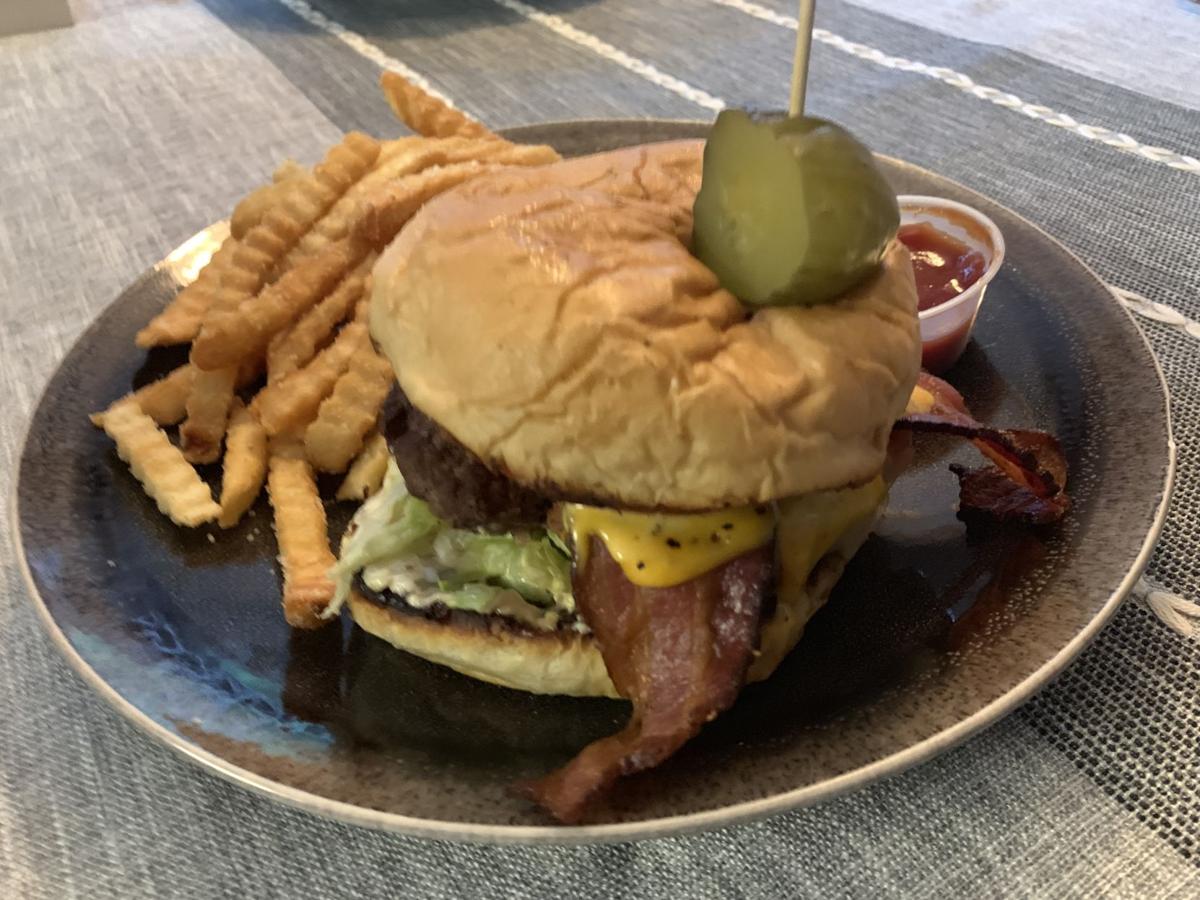 The Classic is a popular meal choice at the Red Road Pizza Co. (John Gottberg Anderson / For The Bulletin)

A quartet of food trucks are tightly packed at Wild Ride Brewing.

Zoë Ditmore was born and raised on the Caribbean island of Barbados, a nation so small that it could fit inside Deschutes County 18 times.

After Ditmore’s family moved to Central Oregon in 2003, she found herself dreaming of the exotic dishes that were part of her growing up — dishes like pickled breadfruit and cucumber, fried flying fish with cornmeal-and-okra cou cou, sweet potato pudding with pickled pig “souse.” Foods like this were hard to find in the Pacific Northwest.

But she never forgot them. Ten years after arriving in Bend, Ditmore was an honors graduate of the Cascade Culinary Institute. Encouraged by rave reviews for her home cooking, she bought a food truck in the summer of 2014 and opened for business that fall. She later added another. Today, The Jerk Kings (“Authentic Caribbean Street Food”) is the single best reason to pause for a meal at Wild Ride Brewing in Redmond, and perhaps also at the River’s Place pod on Bend’s east side.

The emergence of Ditmore’s business couldn’t have been better timed for the 2014 opening of Wild Ride, a production brewery and family-friendly tap room in the heart of downtown Redmond. Rather than build their own kitchen in the former lumber-storage facility, Wild Ride’s owners encouraged mobile kitchens to share its lot at SW Fifth Street and Deschutes Avenue.

It has been a great match. In addition to The Jerk Kings, Wild Ride is host to three other food trucks: FoodFellas (burgers and tacos), Shred Town (sandwiches, burritos and noodles) and the Red Road Pizza Co.

But having dined from all four trucks, I find Ditmore’s to be decidedly the best.

Barbados grew as a gateway to the New World for trade ships from Africa and Brazil, and its cuisine is indicative.

The kitchen’s specialty, however, derives from Jamaica. Jerk is a seasoning that originated as a preservative: The all-spice berry from the pimento tree is dried and ground, mixed with hot peppers and used as a rub or marinade on chicken, pork and other proteins, including shrimp.

If you prefer mild spice, you’ll want to let the kitchen know when you order. The enthusiastic staff may not discourage you from going spicy, but neither do they want to drive you away.

And they are glad to recommend according to your dietary desires.

Perhaps the best way to enjoy The Jerk Kings’ offerings is with the Caribbean rice bowl ($11 or $12). Meat (I chose pulled pork) is presented on a bed of brown rice with black-eyed peas and black beans, toasted coconut, potato and sweet potato, green onion and delicious pan-fried okra, garnished with avocado slices. I thoroughly enjoyed my serving.

On another occasion, I was pleased with a grilled jerk-chicken wrap ($9), rolled in a flour tortilla with brown rice, black-eyed peas and a refreshing pineapple-and-jicama slaw.

Other dishes on the menu include coconut shrimp curry ($13), Bajan fish cakes (salt-cod fritters, $8 or $12) and a veggie bowl ($11). Samplers are available; the caramelized plantain ($3), when available, is delicious.

The best thing about FoodFellas, an original Wild Ride truck, is its brewers’ bacon cheeseburger ($13). Made of Angus beef, the thick and juicy patty is blended with bits of bacon and cooked just medium. Then it is topped with applewood-smoked bacon, cheddar cheese, an original sauce, lettuce and tomato, and served on a potato bun from a Central Oregon bakery.

The burger comes with crinkle-cut fries, seasoned with garlic and Parmesan cheese. The fries are $7 if ordered a la carte. I found the garlic mild but the salt much too heavy.

Food Fellas has a Reuben sandwich ($13) that is thick with lean corned beef, sauerkraut and Swiss cheese. That’s what I’ll look forward to on a future visit. The tacos, however, didn’t appeal. Made with beer-battered whitefish (two for $10), sautéed shrimp (two for $9) or shredded pork loin (three for $9), they are served with the kitchen’s own cilantro-tomatillo-yogurt sauce. Another diner warned me they are bland.

The menu at Shred Town is an eclectic one, with tacos, burritos, Japanese yakisoba noodles, a barbecue pulled-pork sandwich and loaded nachos. I appreciate the wide-ranging intent, but I wonder if the quality might be better if the selection were more focused.

I opted for a Cuban sandwich ($12), which apparently is not as Caribbean as jerk. I expected something quite different from what I got. Originated by cigar-factory workers in Florida in the mid-19th century, it was once considered a Cuban variation on the American ham-and-cheese sandwich. Shred Town’s version was not a bad sandwich, but as a Cuban, it was an epic fail.

Thin slices of crispy bacon took the place of juicy ham. Roasted pork, Swiss cheese and stone-ground mustard were true to the original recipe, but pickle chips were far fewer than usual. Worse, the bread was a simple pressed pub roll, unevenly sliced, with none of the soft sweetness of proper Cuban bread (and available at the Cuban Kitchen on Bend’s west side). The sandwich was served with tortilla chips and guacamole, a curious twist in themselves.

Other diners have offered very mixed reviews of the noodles, tacos and nachos. The barbecued pork sandwich is the only dish that has consistently earned kudos. With a second truck at Spoken Moto on Industrial Way in Bend, I expect the enterprise to improve.

When Chad and Tessa Colley launched their first pizza truck in 2016, they named it for the 66-mile Cascade Lakes Highway — “The Red Road.” Originally paved in the 1950s with the region’s trademark red volcanic cinder, it provided access to fishing, hiking, camping, skiing and scores of other Deschutes National Forest pursuits.

The original color disappeared when the route was asphalted in the 1980s, but its importance wasn’t forgotten: The highway was dedicated as a National Scenic Byway in 1989.

There’s still plenty of red, however, in every pizza (big enough for two) made with the Colleys’ original-recipe marinara sauce. That’s most of them. I was pleased with The Classic ($14), featuring pepperoni, sausage, mushrooms, black olives and green bell pepper. It wasn’t what I’ve come to expect from brick-and-mortar ovens, but for pizza from a truck, it was damn good.

Red Road also makes a basil pesto base and a couple of unique barbecue sauces, one with pineapple and habanero peppers that’s a perfect match for The Islander ($13). This pizza also has slow-cooked pulled pork, cilantro and red onions.

Food: () Only Caribbean jerk meats and bowls are unique; other options are less appealing.

Atmosphere: () Wild Ride has a lot of room for dining and drinking, even for families.

Vegetarian and gluten-free menu: Every vendor has meat-free options; some are gluten-free

NEXT WEEK: PUB FARE AT J-DUB’S AND STIHL WHISKEY BAR