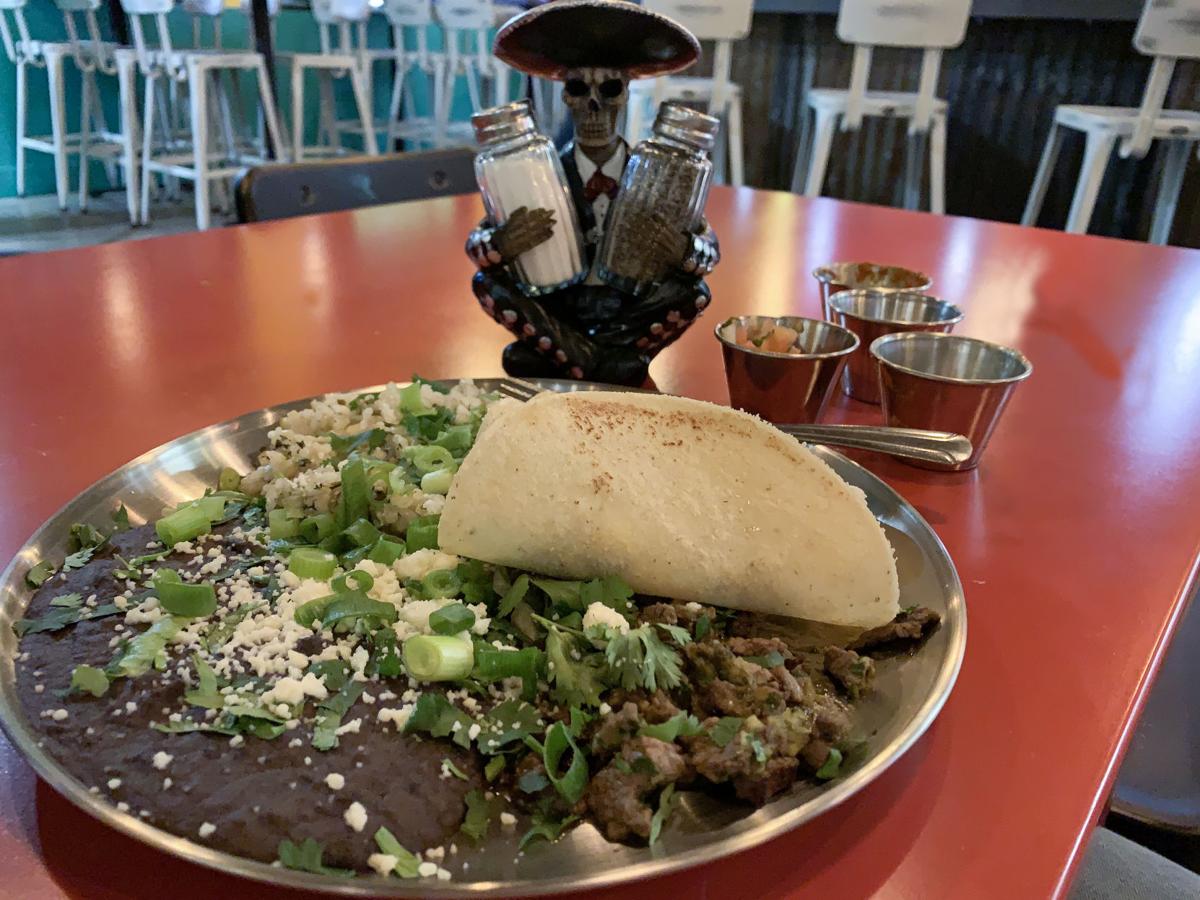 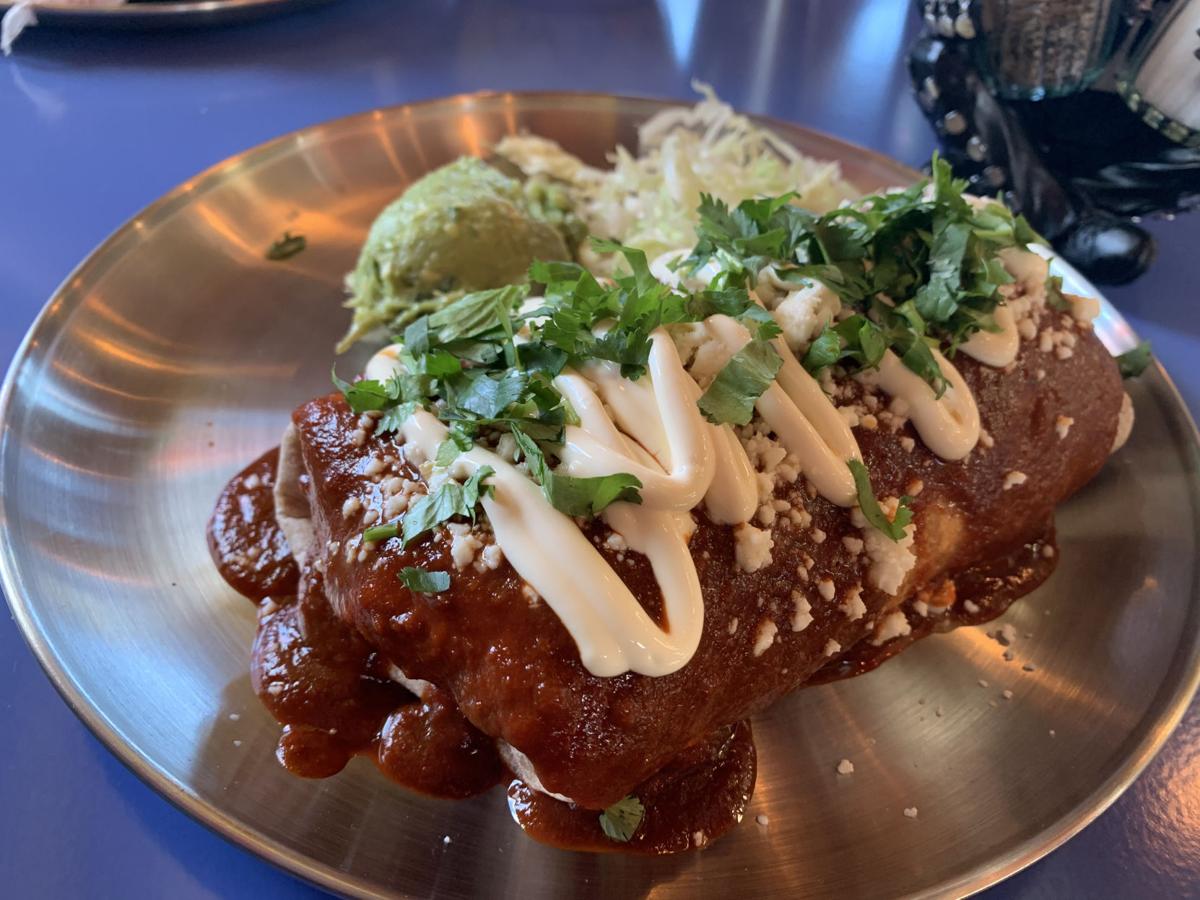 Vida Y Tacos — the name means life and tacos — was born from owner Michael Moor’s love of tacos and his commitment to offering healthy food.

Moor and partner Garrett Wales (both formerly with the 10 Barrel Brewing/Anheuser-Busch group) made their first foray into healthy food with their fast food restaurant, Life and Time, across from the new restaurant in a parking lot shared with Bend’s westside Safeway.

Vida Y Tacos offers an organic and local fresh food approach. Tacos are made of free-range beef from Pacific Northwest cattle at Oregon Country Natural. Pork is sourced from Carlton Farms. The chicken used in Tinga and in the chicken tortilla soup has no hormones or antibiotics. All meats and other ingredients are organic.

My first visit to Vida Y Tacos was on a Sunday night. There were diners at several tables, but it was not particularly busy.

As we walked in, we saw that the restaurant had the same format as the previous culinary inhabitants, but the walls and tables had been painted in a brightly colored south-of-the-border style. Food orders are placed at the counter as you walk in the door. Two monitors display the menu.

General Manager Melody Philbrook describes the restaurant as “slow dining fast food.” Food is delivered quickly, but diners can take as much time as they want to enjoy their meal.

Drinks were promptly brought to the table after we sat down; food was delivered quickly. The restaurant doesn’t have a full bar but does have a variety of spirits you would expect to see where you get Mexican food. Tequila, margaritas and Negro Modelo beer on tap are some of the alcohol offerings.

I ordered the carne asada plate with the refried bean side and cilantro brown rice. While the beef didn’t come as a typically butterflied skirt steak, the small beef bites were tender (without gristle or fat) with the recognizable smoky and citrus-grilled carne asada flavor.

It was immediately obvious that Vida Y Tacos uses fresh ingredients. This Mexican food is not heavy. The black beans are made with rice bran oil instead of lard. The flavor is rich but light. The cilantro brown rice was nutty, fresh and flavorful. Two house-made, gluten-free, organic white corn tortillas accompanied the meal.

My companion opted for three traditional tacos: the Tinga chicken taco, the Baracoa slow-cooked beef taco and a carnitas (pork shoulder) taco. All are served on the homemade corn tortillas, made fresh each morning. The three were served in a taco rack and included a generous topping of cilantro and white onion. What most impressed me about all three tacos was how juicy the meat was. No other salsa was required.

But the house-made salsas in the salsa bar were calling. All salsa is house-made. Red or green salsa is available in mild and spicy options. The green salsa is made with green onions and serrano chilies in a tomatillo base that is blended and roasted. The spicy version contains organic capsicum that is said to have a ton of health benefits, including being anti-inflammatory and anti-free radical. A flavorful Morita salsa (a blend of smoked and dried jalapeños) is tasty and not too spicy.

My second visit was at lunchtime. While it wasn’t busy when we arrived, it got busy right after we ordered. The service was notably different. My drink wasn’t brought to the table. I was later informed that I should pick it up next to the salsa bar. There was no drink there. The wrong order was delivered to my table. To be fair, the restaurant has only been open for five weeks, and I’m sure the servers are still working out the procedures.

My dining companion wanted a soda, but true to the healthy theme, only house-made Agua Fresca and horchata, made with agave or raw coconut sugar, are available. He ordered three of the Extraordinary Tacos.

We didn’t find the taste as extraordinary as the traditional tacos. The Korean BBQ taco included beef bulgogi (marinated in soy, ginger and Thai chile paste), and was served with a dollop of ssamjang Korean spicy dipping sauce. We found the meat to be tasty, but there wasn’t much sense of it being Korean. The Ahi Poke taco was served in a cabbage shell. It was raw tuna but there was no ginger or soy sauce typical of an actual poke dish. Executive Chef Luke Mason explained that the name of the dish was to let customers know that it was raw tuna. I felt that the jalapeño aioli would have been a nice contrast to real poke and would add more flavor to the taco.

My meal was a wet burrito. The burritos are served either on a whole grain tortilla or on a gluten-free option made from teff flour. It was suggested that I order it with carnitas. Stuffed thick with black beans and Spanish rice, the burrito was topped with a wonderfully smoky, thick ranchero sauce that is more flavorful than at other Mexican restaurants. The sauce is made with guajillo and puya chilies that create a smoky, mole-esque flavor.

While the food is clearly made with high-quality ingredients, I found the service and food to be inconsistent. Some dishes stood out more than others. The servers were clearly getting used to the routines.

In all, Vida Y Tacos succeeds in creating a family-friendly environment with inexpensive meals and high-quality, healthy Mexican food.