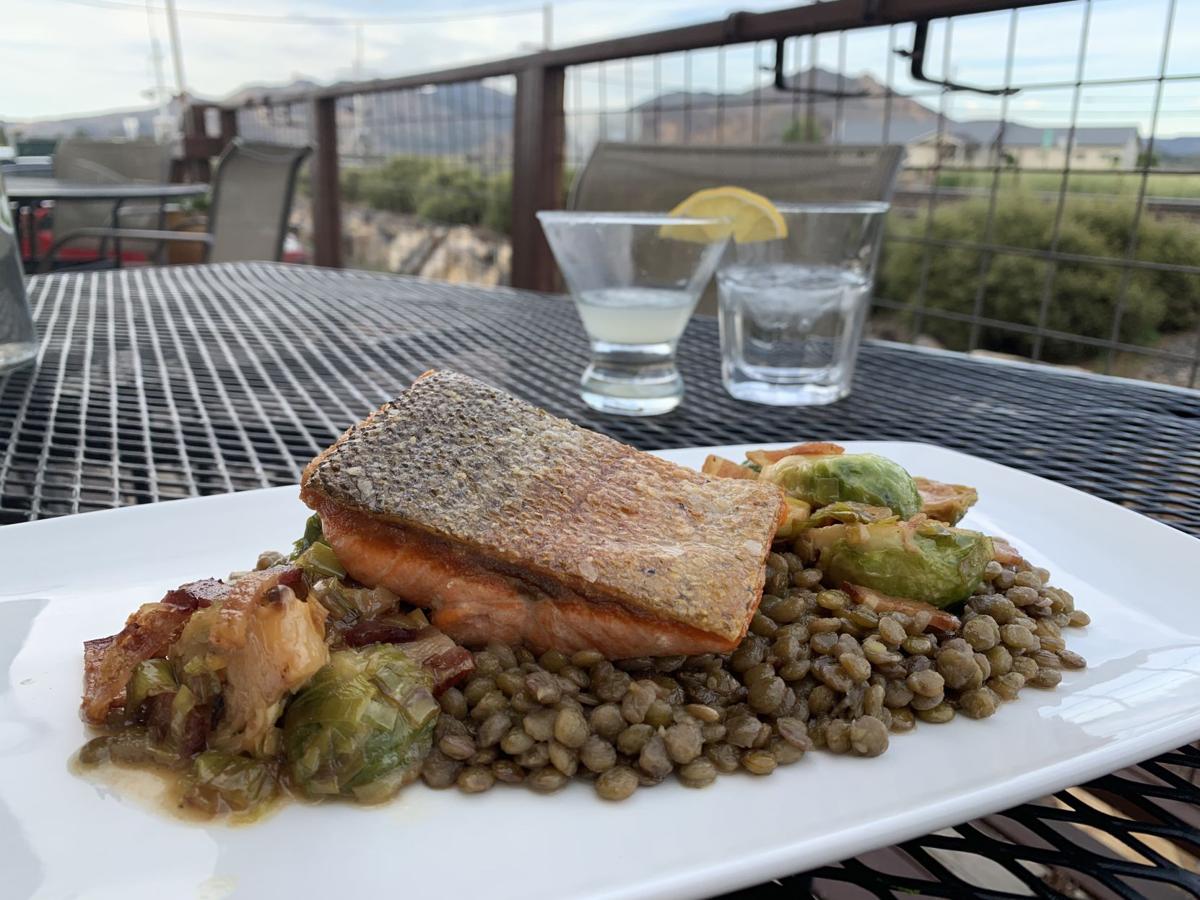 The salmon at Terrebonne Depot is served skin-on atop a bed of lentils. (Barb Gonzalez / For The Bulletin) 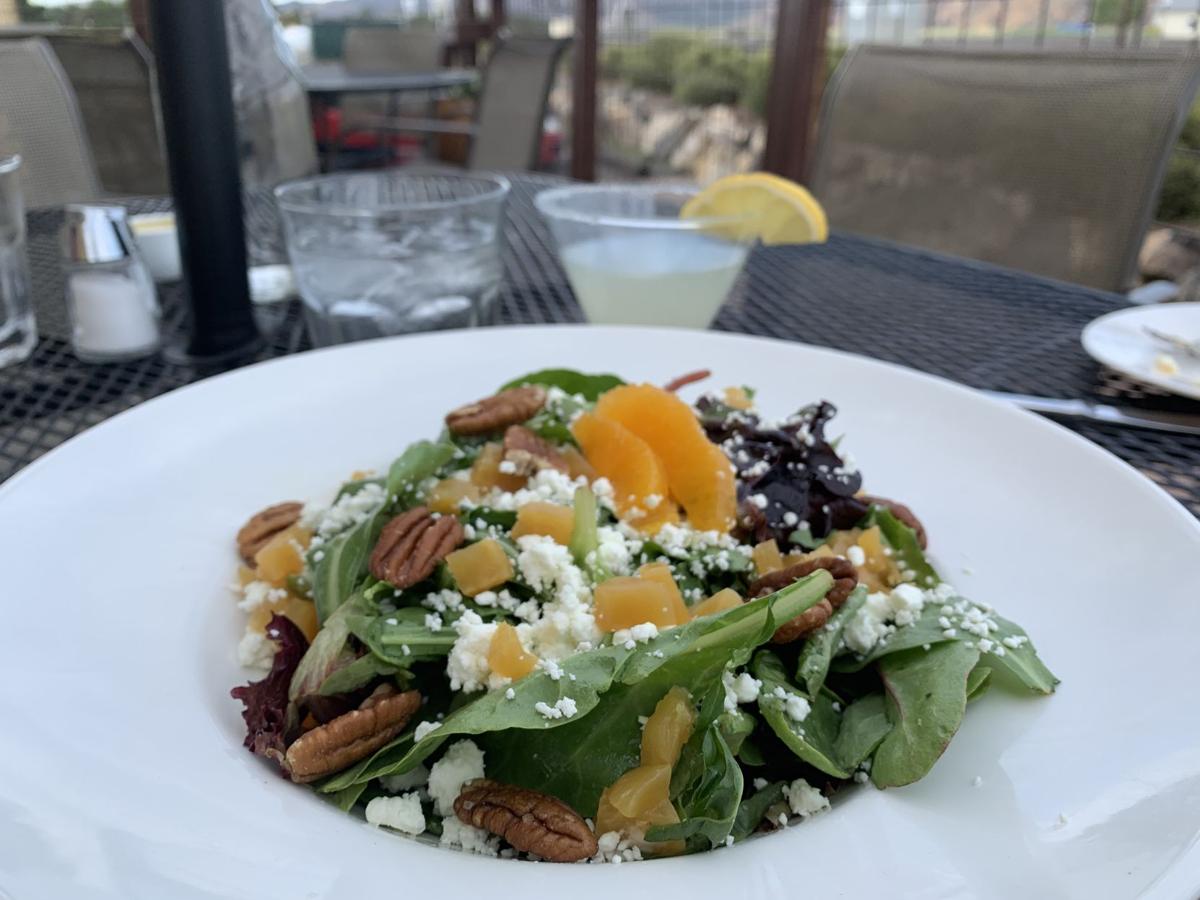 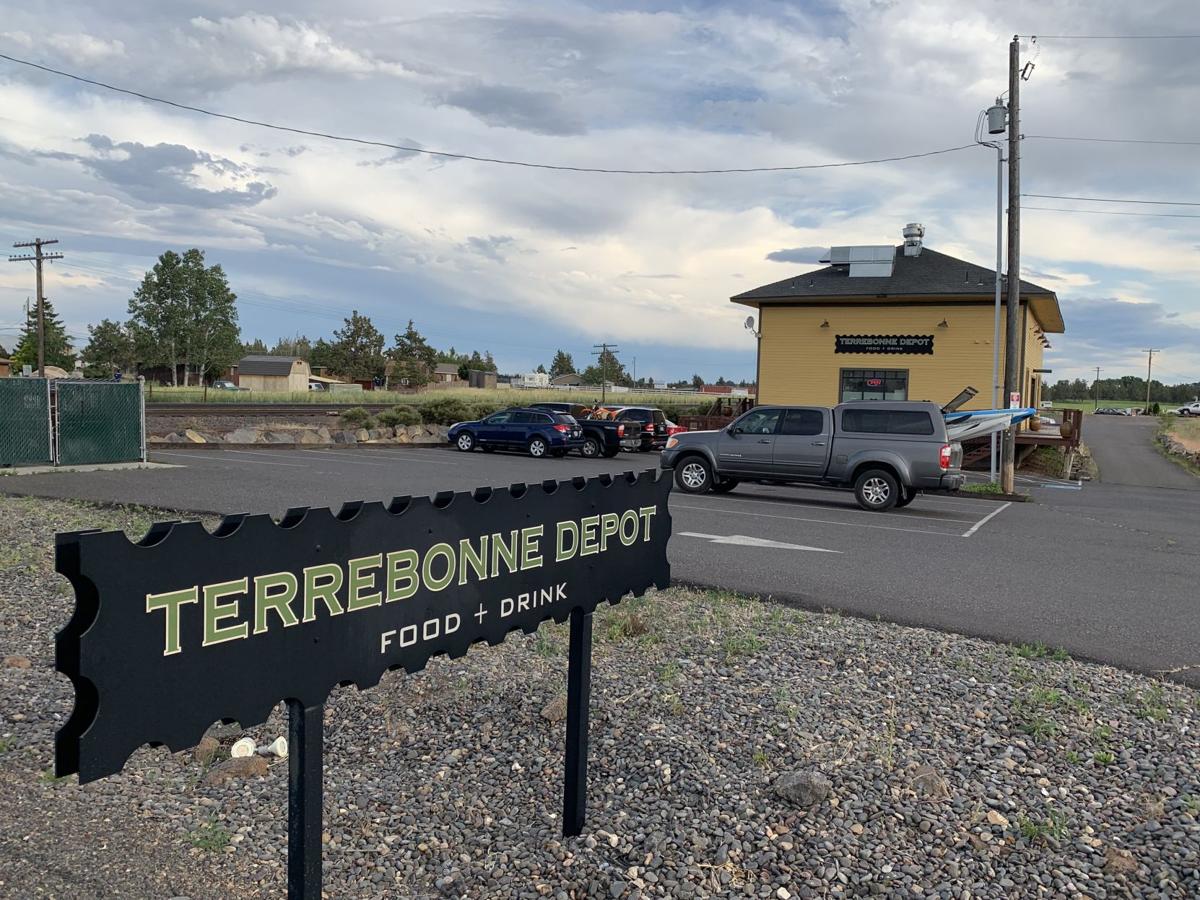 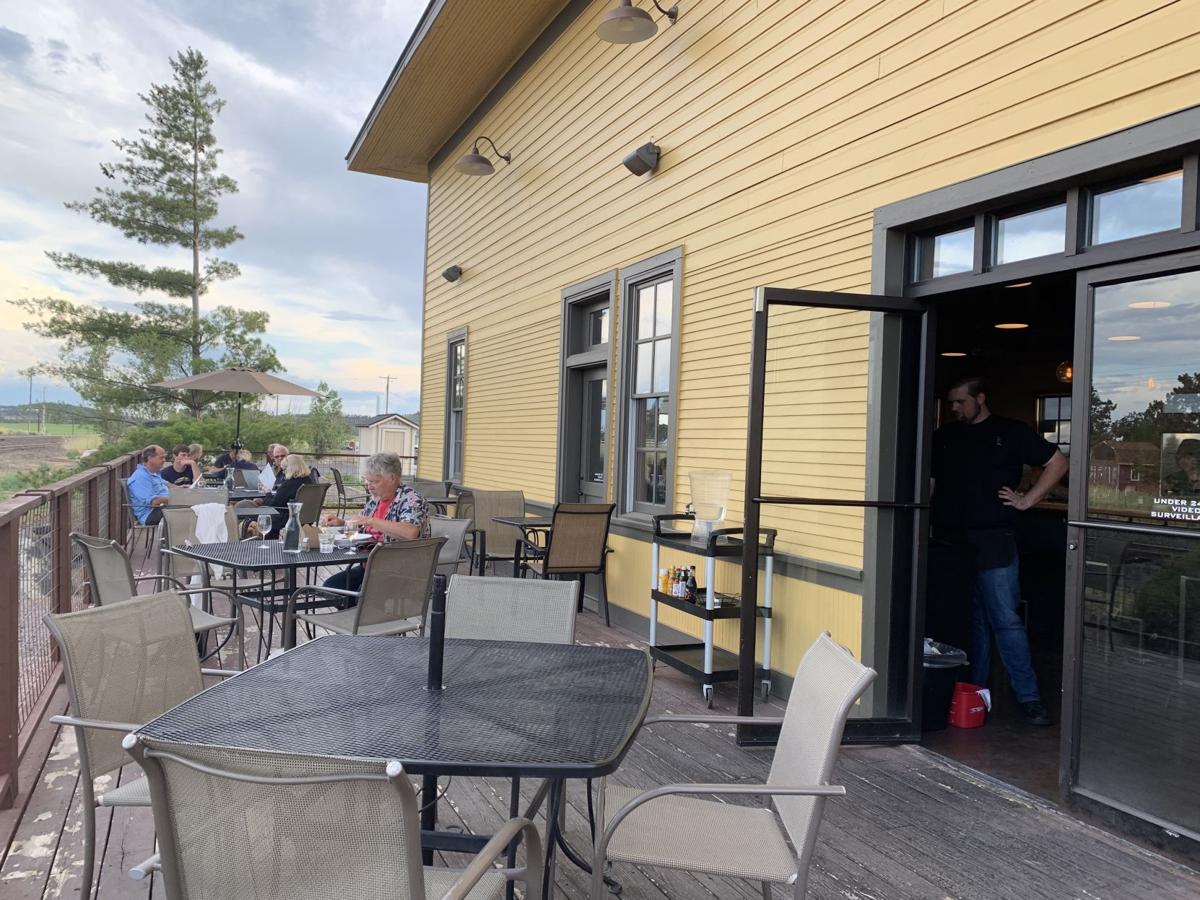 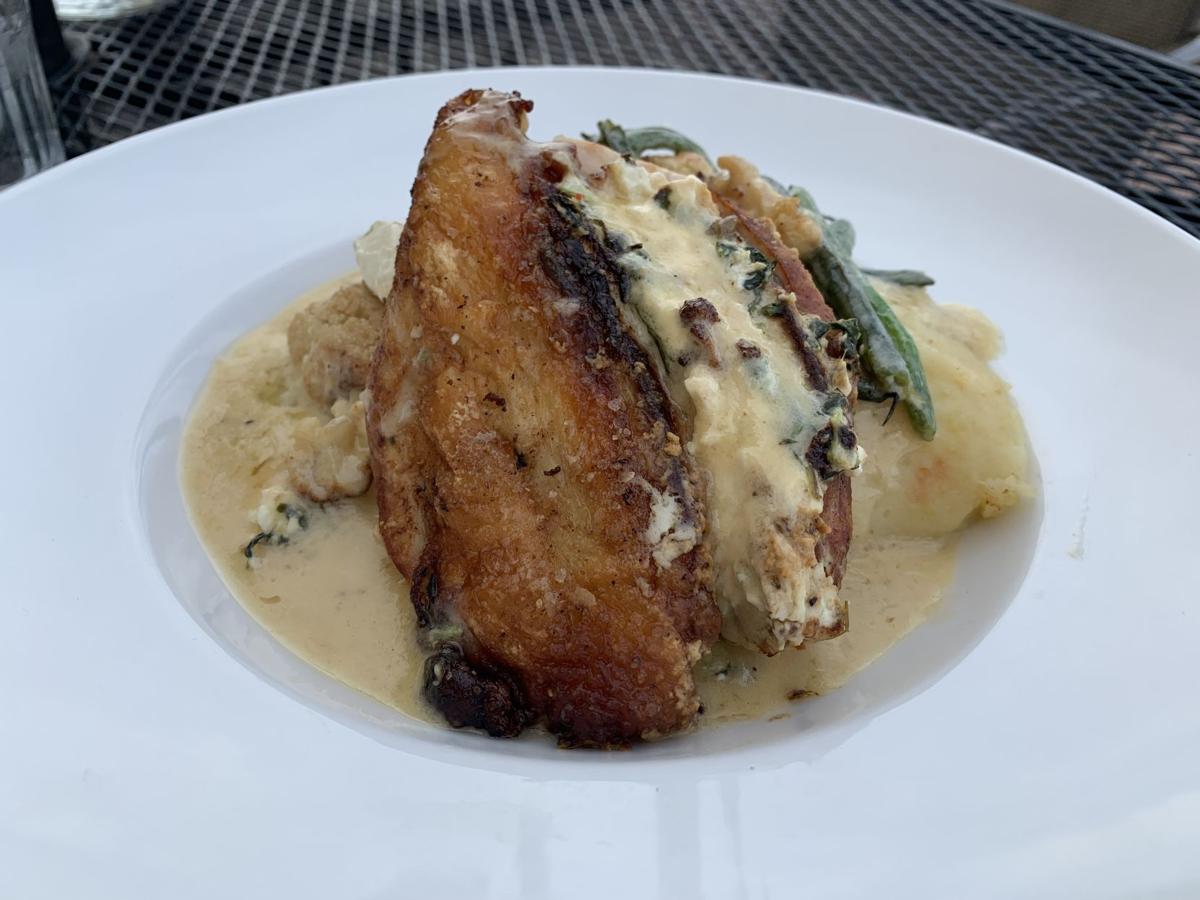 The chicken breast entree at Terrebonne Depot is stuffed with spinach and cream cheese. (Barb Gonzalez / For The Bulletin)

The salmon at Terrebonne Depot is served skin-on atop a bed of lentils. (Barb Gonzalez / For The Bulletin)

The chicken breast entree at Terrebonne Depot is stuffed with spinach and cream cheese. (Barb Gonzalez / For The Bulletin)

Smith Rock State Park is a favorite getaway for Central Oregon residents and visitors alike. The towering basalt cliffs gave birth to modern American sport climbing in the 1980s, and they continue to draw climbers from around the globe to challenge cutting-edge routes rising high above the Crooked River.

Where do the rock climbers go after a morning of grueling exercise and extreme adventure? Chances are, you’ll meet them at the Terrebonne Depot restaurant, owned and operated by others of their exclusive tribe.

The depot is, indeed, a historical train station, built by the Oregon Trunk Railroad in 1911. It served Terrebonne for four decades, but it had stood abandoned since the early 1950s.

Kristin and Ian Yurdin, themselves rock climbers, bought the building in 2004. Their meticulous renovation earned them acclaim from historic preservationists. It was painstaking work; the building wasn’t even fastened to a solid foundation. Using makeshift rails, they slid it 36 feet west into a new, poured-concrete foundation and replaced the decaying interior.

The restaurant opened two years later with Kristin Yurdin as executive chef. A couple of years ago, she stepped away from the kitchen. While the Yurdins still own the building, they sold the business to two other climbers — Evan Schwender and Jamie Bouchard — who reopened on April 1 after a four-month winter closure.

Lured by Smith Rock and other climbing destinations, Schwender and Bouchard moved to Central Oregon from the northeastern United States in 2015. As established chefs, the pair quickly found work in Bend at 900 Wall, Schwender as a sous chef and Bouchard as pastry chef. They also developed a following at their popular food cart, Beta Bites, parked for 10 months in the parking lot of the Bend Rock Gym.

In taking over Terrebonne Depot, Schwender said, they see an opportunity to continue supporting their customer base of climbers, while also attracting Smith Rock visitors and the greater north Deschutes County community.

The revised menu is one that focuses on gourmet comfort food, made from scratch with locally sourced ingredients. There’s nothing on the menu more exotic than vegetarian risotto with oyster and shiitake mushrooms, or tagliatelle Bolognese with house-made pasta and a sauce of ground elk, beef and pork — unless you count in some internationally influenced sandwiches from the Beta Bites days, such as a Cuban and a Vietnamese banh mi.

The restaurant is spacious and comfortable, with pine tables and chairs nestling beneath exposed beams. A handsome, horseshoe-shaped bar is crafted from fir blocks that once supported the floor, and the depot’s historic clock hangs on the south wall. There’s seating for 52, with another 12 stools at the bar and 10 additional tables on a broad deck beside the train tracks.

When my dining companion and I arrived for an early evening meal, we took an outside table. The pinnacles of Smith Rock, dominating the horizon to the northeast, lent a touch of tranquility to the scene ... although I would have felt differently had a freight train rumbled past, as they occasionally do.

We started with an abundant hummus plate ($9.50), featuring chopped artichoke hearts, marinated in rosemary olive oil, and pitted Kalamata olives. Bite-sized cubes of cucumber in a yogurt-rich tzatziki sauce, crumbled feta cheese and tomatoes completed the platter, along with ample grilled flatbread for dipping and spreading.

The delicious seasonal salad (also $9.50) was highlighted by coarsely diced yellow beets, candied pecans and orange wedges. It was served on a bed of arugula and mixed greens with a champagne vinaigrette and sprinkled with goat cheese.

My entree choice was a chicken breast ($20) stuffed with cream cheese and spinach. Presented with a mound of mashed potatoes, green beans and roasted cauliflower, it really was an ultimate comfort food. As much as I enjoyed it, I found it a little too salty and cheesy for my taste, and a finishing lemon-garlic cream sauce was unnecessary.

My companion enjoyed a skin-on, pan-seared salmon ($23) on a hearty bed of green lentils. Brussels sprouts, sauteed with bacon and leeks, enhanced the meal.

Because of Bouchard’s skill as a pastry chef, we would have been remiss to leave Terrebonne Depot without trying one of her desserts. The brownie sundae ($7.50) had bite-sized chunks of warmed chocolate brownies and “blondies” covered in chocolate sauce, topped with toffee crumbles and served with local vanilla ice cream. It was the perfect end to a fine meal.

Service was all we might have hoped for. Our server was attentive but not overly so; he was personable and knowledgeable, explained the menu items where we had questions, and was quick to offer suggestions on the short but excellent wine list.

We’re not climbers, but we still consider Terrebonne Depot worth a detour during any visit to northern Deschutes County.