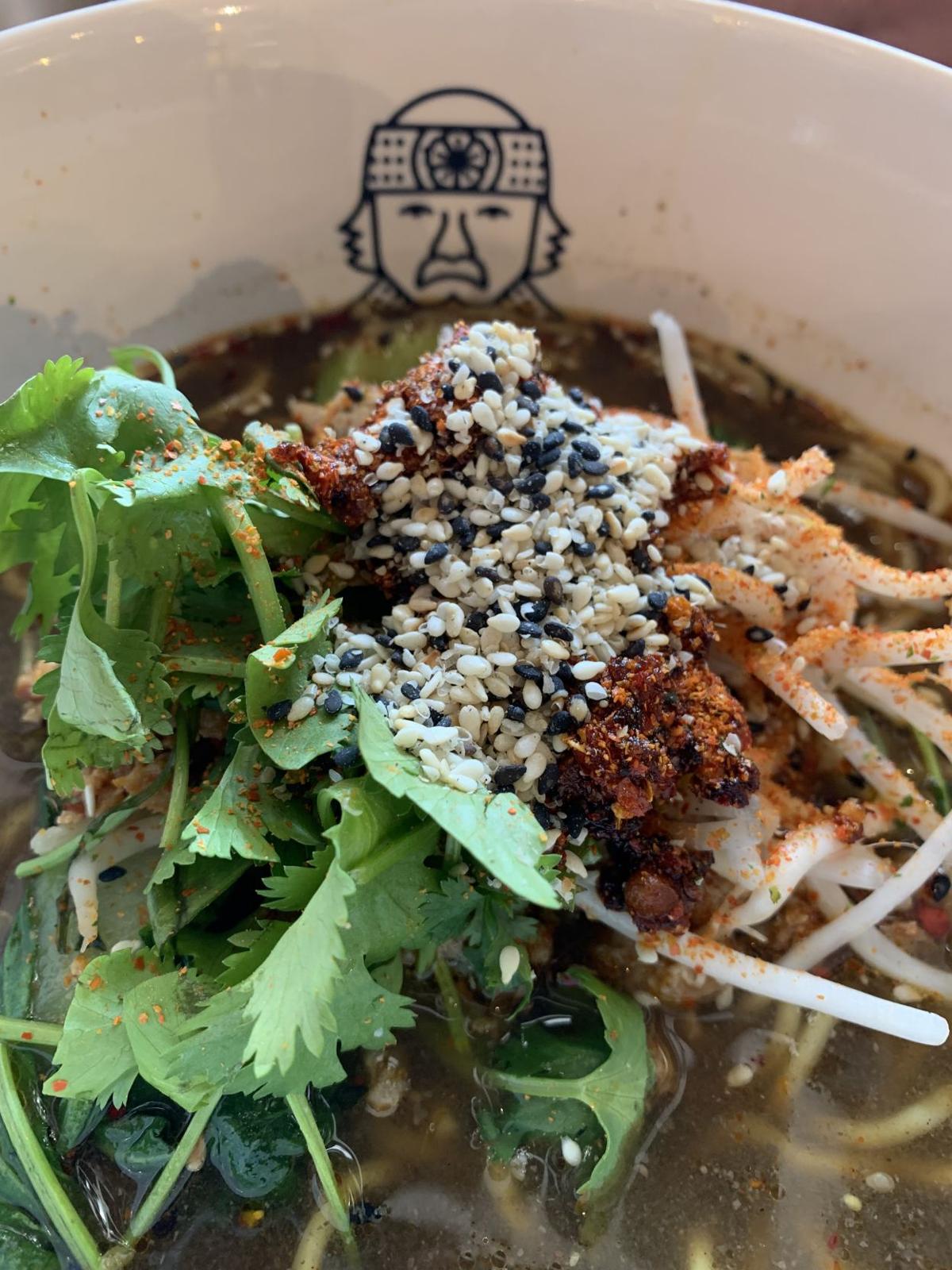 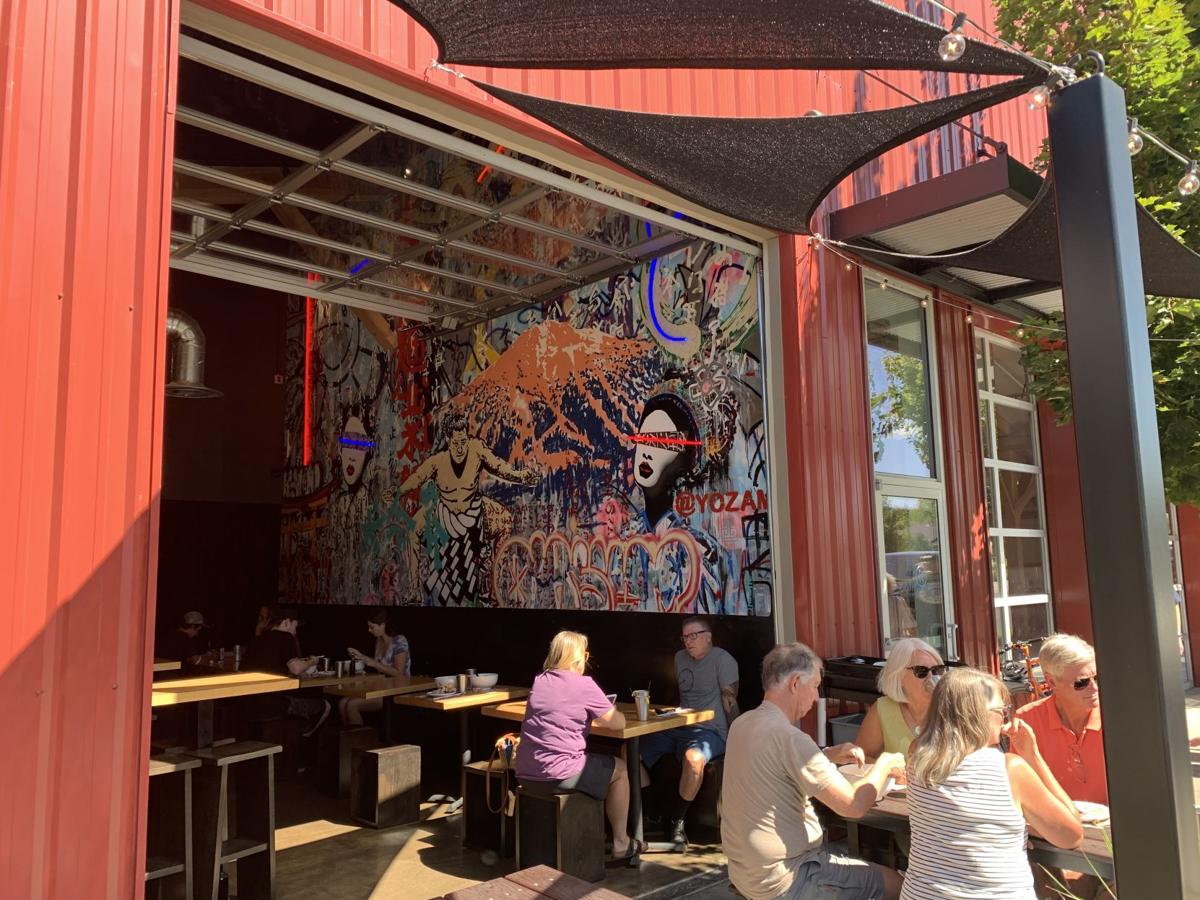 A colorful mural by Ricky Yozamp highlights the atmosphere at Miyagi Ramen in Bend’s Box Factory.(Barb Gonzalez/photos for The Bulletin) 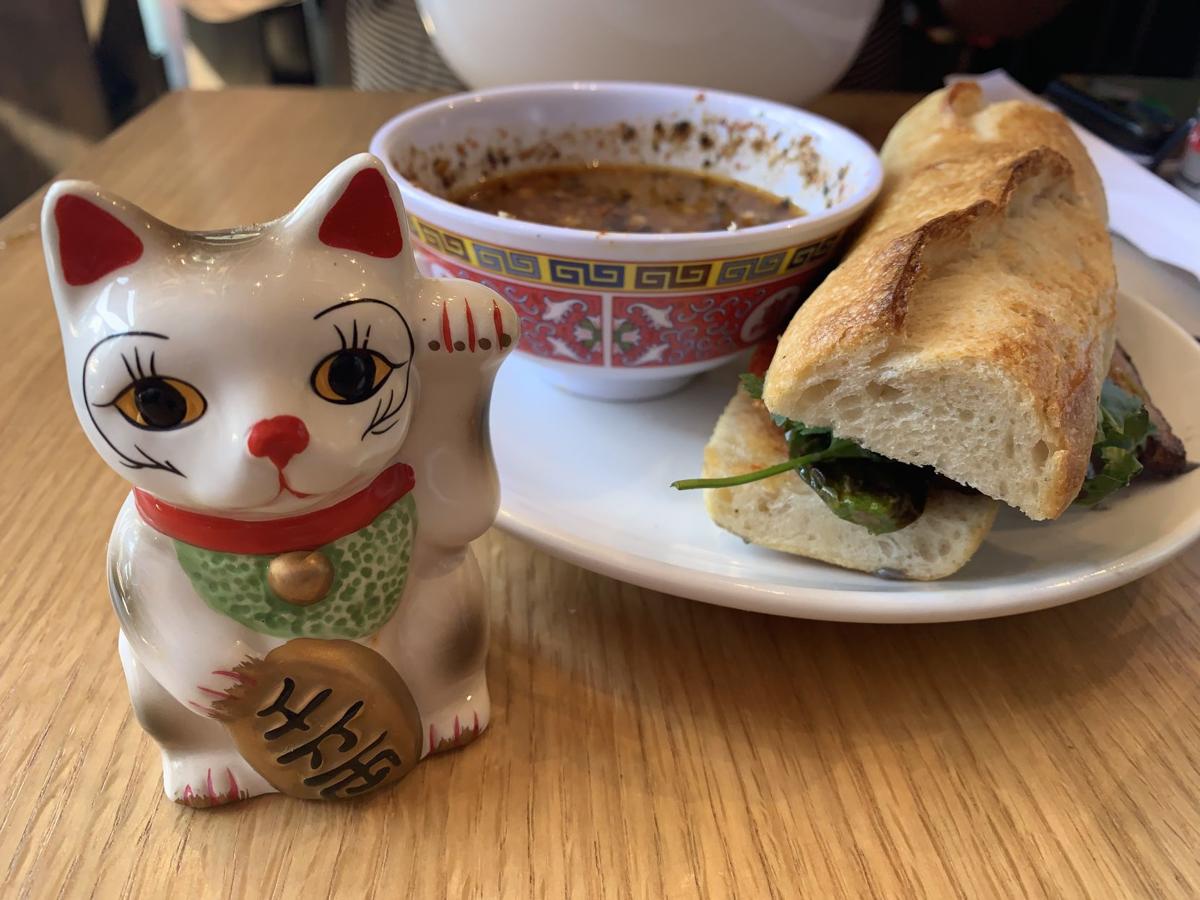 The good-luck cat sits beside the Ramwich and its spicy miso dip. (Barb Gonzalez / For The Bulletin) 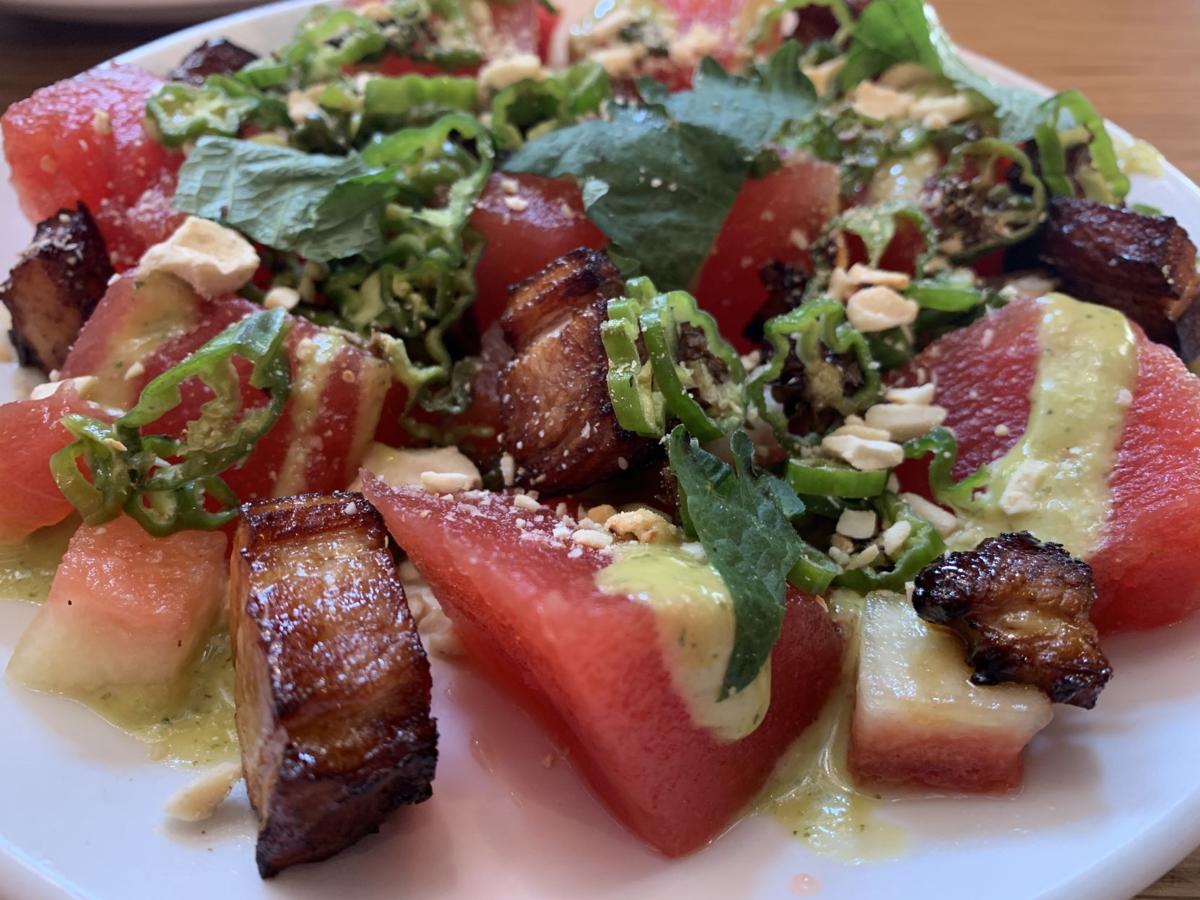 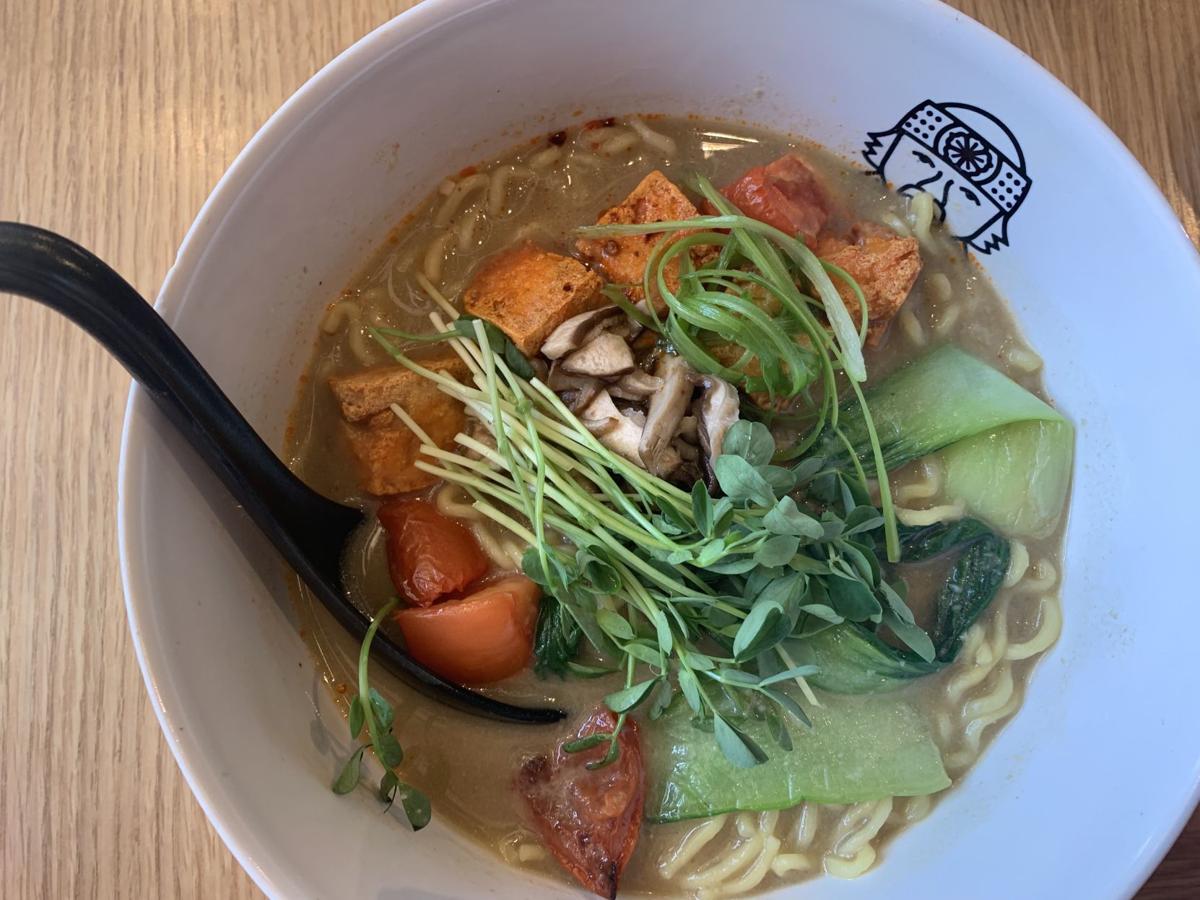 Tofu and mushrooms in a cashew puree highlight a vegan ramen.

A colorful mural by Ricky Yozamp highlights the atmosphere at Miyagi Ramen in Bend’s Box Factory.(Barb Gonzalez/photos for The Bulletin)

The good-luck cat sits beside the Ramwich and its spicy miso dip. (Barb Gonzalez / For The Bulletin)

Tofu and mushrooms in a cashew puree highlight a vegan ramen.

If Mr. Miyagi, as portrayed by actor Noriyuki (Pat) Morita in the “Karate Kid” movies of the 1980s, had owned a noodle shop, it might have crossed cultural barriers in the same way as Bend’s new Miyagi Ramen.

As a martial-arts coach and Zen philosopher who could catch buzzing houseflies between chopsticks, Mr. Miyagi educated young Daniel LaRusso (Ralph Macchio) on traditional Japanese ways within the context of modern Los Angeles.

Three decades later, chef George Morris is bridging the gap between East and West for a new generation of Central Oregon diners.

Miyagi Ramen, which opened at the end of June in the Box Factory on Industrial Way, specializes in the hearty noodle soup that is emblematic of casual dining in Japan. But the intimate cafe also offers a watermelon salad, a sandwich dubbed the “Ramwich,” steamed buns and other atypical plates — all beneath a frantic, neon-tinged mural that blends scenes of old and new Japan.

In planning Miyagi, Morris spent two weeks in Tokyo “trying to get a feel for what would be a great bowl of ramen.” He said he discovered that most Japanese restaurants, devoted to a particular cuisine (sushi, donburi or yakitori, for instance), didn’t stray far from tradition. “Ramen was the one type of food where chefs showed more creativity,” he said. “That was a bit of a relief for me.”

Miyagi serves four versions of ramen, as crafted by Morris for Central Oregon tastes. My dining companion and I tried three of the four, each of them distinctive in broth and ingredients, and there wasn’t one we didn’t like.

We didn’t have to be on a meatless diet to enjoy the vegan ramen ($14) with spicy tofu. Smoked shiitake mushrooms in a puree of roasted cashews make this a unique dish, complemented by pickled baby bok choy, scallions and slow-roasted tomatoes.

We haven’t yet tried the tonkotsu ramen ($13.50), which Morris characterizes as a more traditional Japanese-style ramen. A sous-vide egg tops a broth that features chashu pork, nori seaweed, pickled burdock root, bamboo shoots and scallions in a black garlic oil.

The same firm wheat-flour noodles are used in each of the soups. Miyagi purchases them from Sun Noodle of Los Angeles, which Morris describes as “the most widely used fresh ramen noodle in the business.”

It’s not all ramen at Miyagi. We like the watermelon salad ($10.50) so much, we’ve ordered it twice. Squares of compressed watermelon are mixed with chunks of crispy pork belly, cashews and shiso leaves in a shishito pepper vinaigrette. Morris calls it a version of Malaysian street food.

Steamed buns (two for $7) may be filled with chashu pork, chicken katsu or tempura maitake mushrooms, and seasoned with hoisin, burnt scallion mayonnaise and barrel-aged Sriracha. We preferred the pork bun to mushroom.

New to the menu is the delicious Ramwich, chashu pork and roasted shishitos on a baguette with a spicy miso broth for dipping. Other menu items, which we haven’t sampled, include versions of chicken wings, pork rinds and green salad.

With only 1,000 square feet of restaurant space, patrons order at the counter and have meals delivered to their indoor or outdoor seats. Chopsticks, soup ladles and other utensils may be picked up from a bus stand. Attendants patrol the cafe, providing assistance where needed.

Morris, 36, came to Bend from Chicago (via New York and Colorado resorts) to establish of Bos Taurus, a premier downtown steakhouse, in 2017.

As one of the half-dozen principals of the Six Top restaurant group, which includes 10 Barrel Brewing founders Chris and Jeremy Cox, he considers Bos Taurus and Miyagi just a start in restaurant growth in Central Oregon.

“After Bos Taurus, we wanted to go in the opposite direction of fine dining and show our versatility,” he said. “We already have another project in the works, another fast casual concept.” He isn’t ready to discuss details, he said.

Morris said he was shocked by the response when Miyagi officially opened to the public on July 1. “I’ve opened a lot of restaurants,” he said, “and the sheer volume of people who wanted to try it made it the most insane opening I’ve ever seen in my life.”