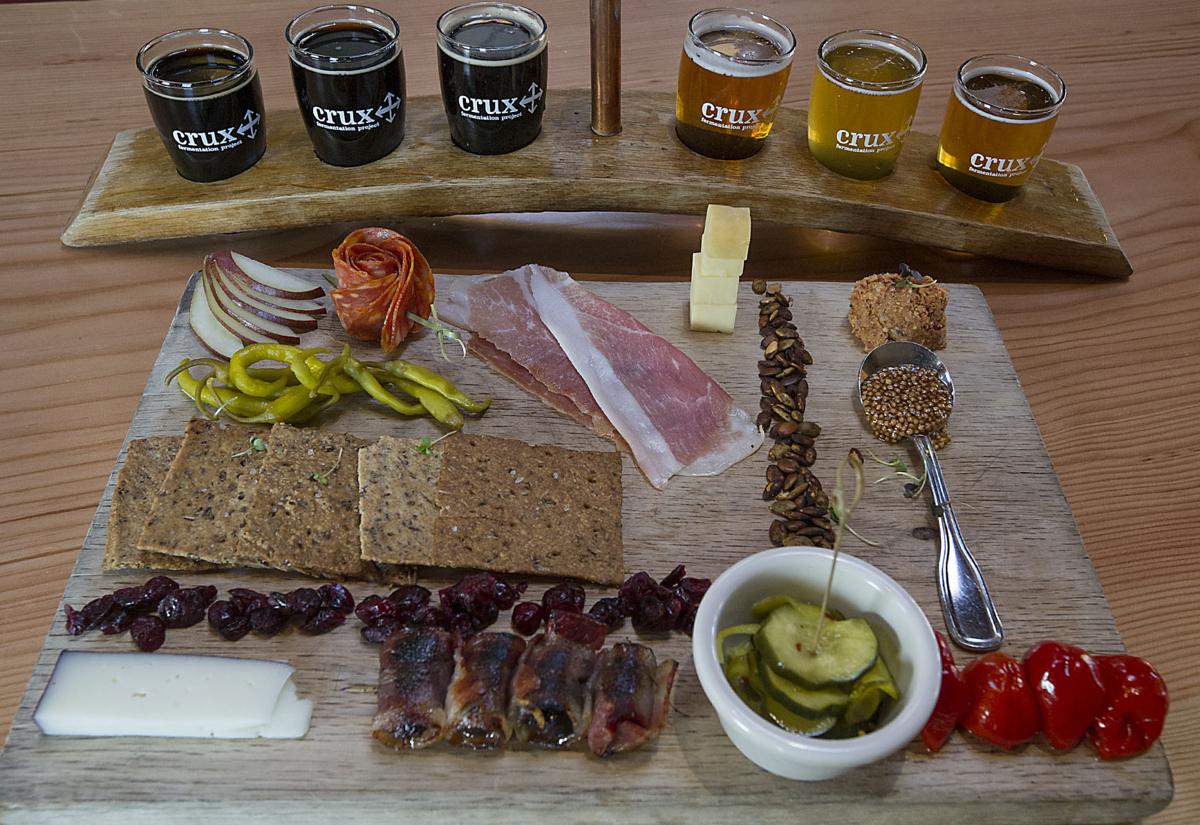 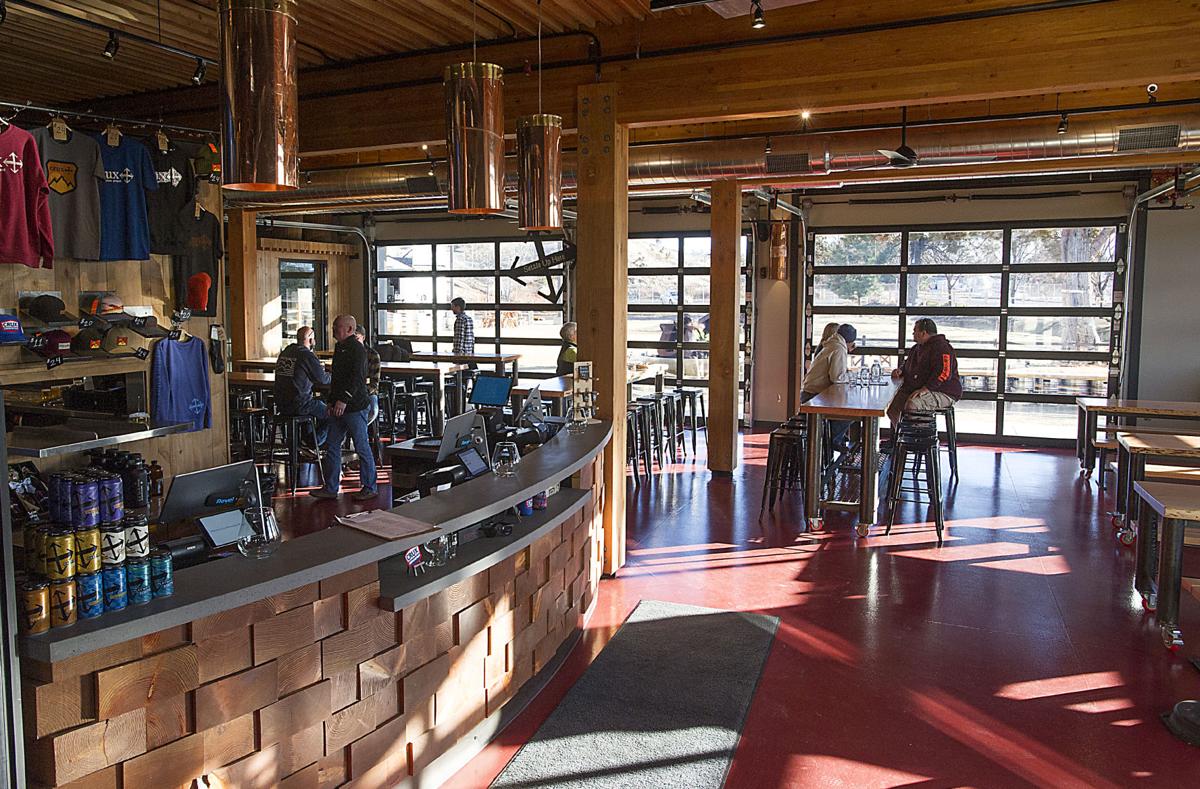 Since it opened in June 2012, Crux Fermentation Project has been among the most successful of Bend’s many brewpubs. But its popularity eclipsed the size of its tasting room. Its management team decided last year that it was high time to expand the former AAMCO transmission plant beside the Bend Parkway.

The new Crux was christened in December, a week before Christmas. The new capacity of 240 feels even larger when its garage doors (and windows) are open. They reach to an expansive lawn area, where El Sancho sells tacos and Das Brat offers wursts from food carts. A fire pit nearby roasts the letters “C-R-U-X.”

“Crux has always evolved to better serve the customers,” said marketing manager Jason Randles, who compares the expansion to a covered outdoor dining area. A series of high common tables — shellacked planks that match adjacent picnic tables — are at the heart of the room, flanked on one side by a container bar that formerly served outdoor patrons.

“We’re not 100 percent done,” Randles said. “We’re growing up a bit, and we still have some fine tuning to wrap up loose ends.”

It’s not just the space — incorporating Crux’s original brewing facility at the building’s north end — that has progressed. Although the menu (dominated by salads, sandwiches and a daily soup) isn’t markedly different from what it was in the brewpub’s first incarnation, the quality is superior.

My favorite dish is a chicken pot pie ($12), prepared like a stew with a Crux-monogrammed puff pastry floating on top. Shredded chicken was blended with peas, carrots, celery and potatoes in a rich, peppery, creamy gravy made with a seasonal IPA. (It may have been Resilience Butte County, sales of which are benefiting victims of California’s Camp Fire.)

I also really enjoyed a trio of Holy Mole chicken tacos ($14), marinated in malty Crux Nitro Stout and served on double corn tortillas. The chocolate-peanut flavor of Mexican mole sauce didn’t come through as much as I might have hoped, but these were excellent tacos, with a fresh cilantro slaw, pickled shallots and crumbled queso fresco (Mexican cheese).

Beef short rib ($14 full, $7 half) is usually offered as a sandwich with pimento cheese. But when my dining companion asked that it be served in a romaine lettuce boat, the service staff quickly filled her request. Removed from the bone after slow-cooking in Crux Stout, the meat was a little dry but otherwise delicious. It was served with Kettle (sea salt) potato chips.

A soup of the day choice was a broccoli-cheddar concoction ($8 bowl, $6 cup), blended but not pureed: Whole buds of broccoli were part of the potage. It was served with delicious whole-grain crackers from Sparrow Bakery.

The Brutus salad ($12 full, $7 half) is described on the menu as “a vegan spin on a Caesar salad.” Of course, a true Caesar is a vegetarian dish except for the anchovies that many restaurants exclude anyway. This one had a Roman twist (“Et tu, Brute?”) with sun-dried tomatoes and green Castelvetrano olives from Sicily, along with a dressing made with ground cashews and Parmesan cheese.

I found it excellent. Randles told me he likes to add bacon to the Brutus and eat it as a wrap. “We are really accommodating on our menu if you’re gluten-free or vegetarian,” he said — even as he acknowledged that bacon is hardly vegan. “But it’s got to be healthy, right? I mean, it’s bacon!”

Service was excellent. When guests arrive at Crux, they take a clipboard with food and drink menus from a stand near the main door. Just ahead, at an always-staffed counter, they place their orders and pay ... and perhaps also purchase a Crux T-shirt or another souvenir.

Drinks, including two dozen choices of multiple styles of Crux beer, are delivered to tables flagged by numbers given to patrons upon payment.

Food follows soon thereafter, often from multiple servers. My only disappointment was that none of them subsequently checked back to see if we were satisfied with our orders.

“The original vision of the tasting room was all about the beer,” Randles said. “We thought we’d just serve some pretzels and maybe some Tex-Mex. But like Crux itself, the menu just kept evolving.”

The Project Board ($20) includes artisan cheeses, cured meats, bacon-wrapped figs and a rotating choice of other small bites, and easily pleases a table of four. The three-dip Black & Tan Pretzel Board ($14) is another popular group dish. Among sandwiches, the Grilled Cheesy ($12, or $6 for half) is a perennial favorite, with provolone and goat cheeses coupled with bacon and spicy pickles on spent-grain toast.

Crux is proud to have added its own house cider, a dry apple selection, to the lengthy choice of beers. On tap since Thanksgiving, it is already a top seller.