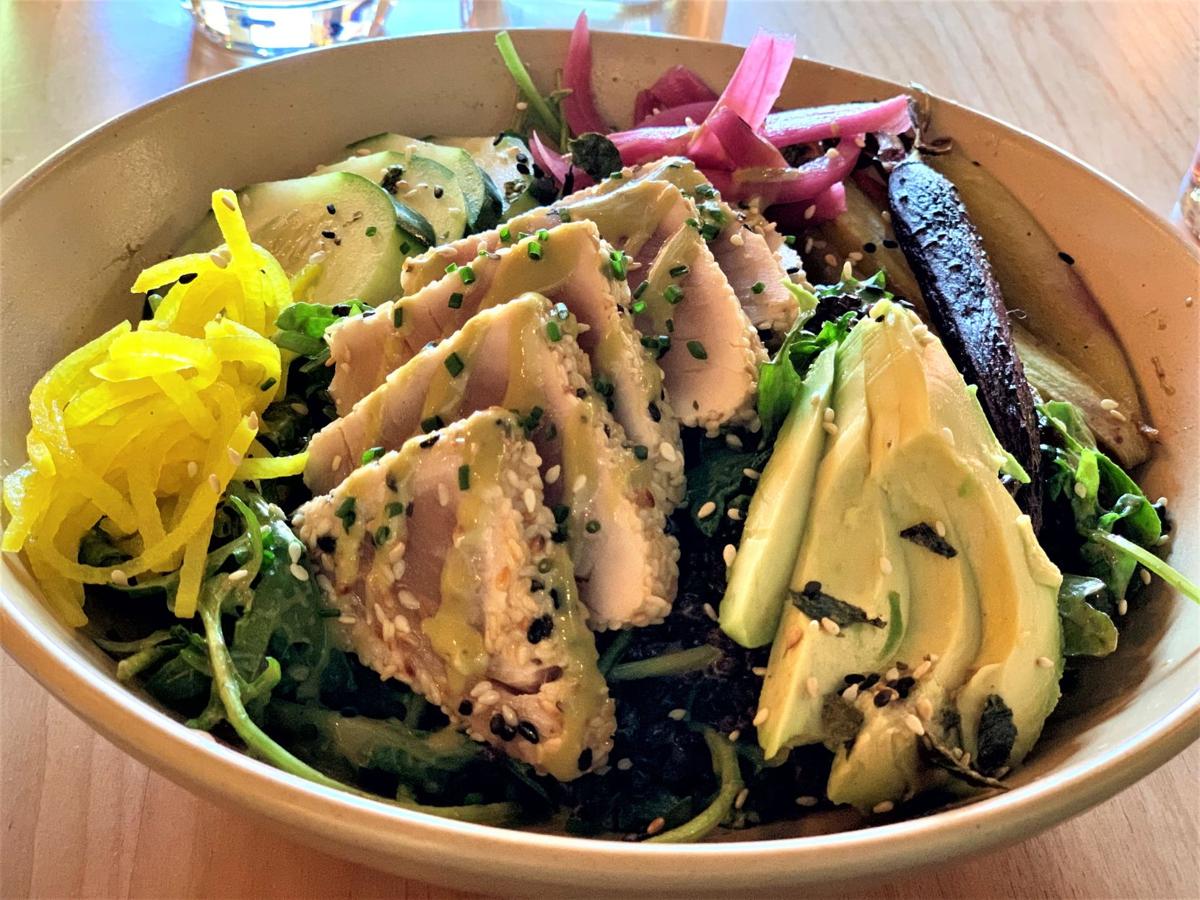 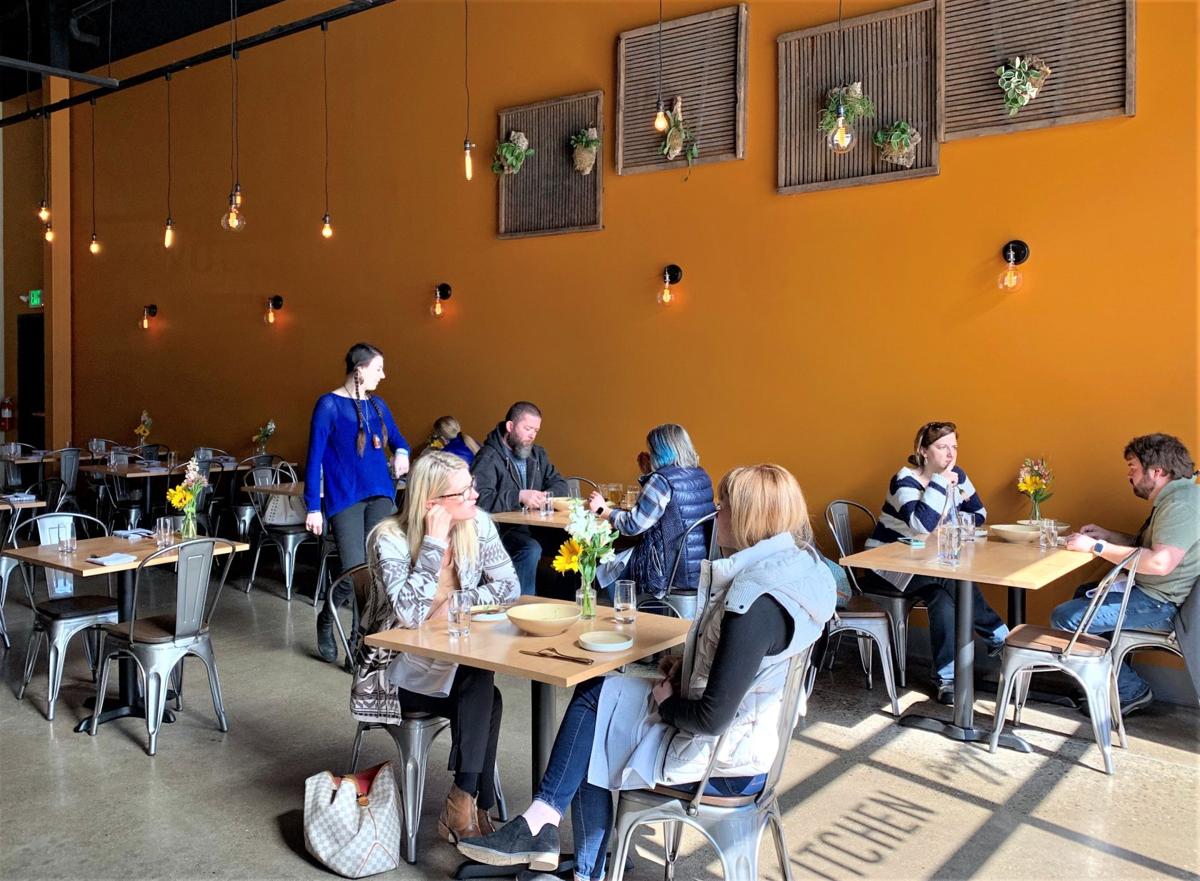 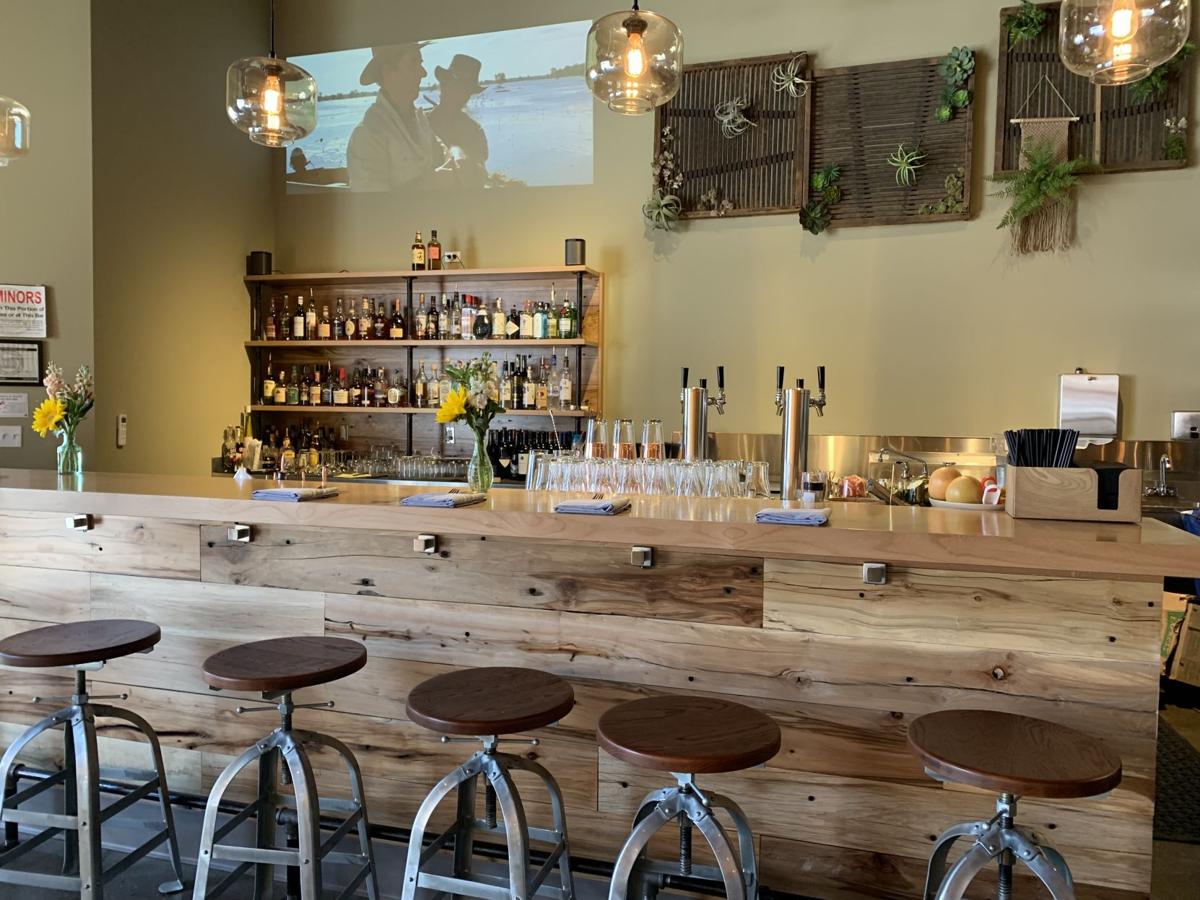 Classic '80s movies are shown behind the bar at the Boxwood Kitchen. (Barb Gonzalez / For The Bulletin)

Classic '80s movies are shown behind the bar at the Boxwood Kitchen. (Barb Gonzalez / For The Bulletin)

The Old Mill’s newest restaurant is the sort of place you’d be glad to take your parents — or, for that matter, your college-age children.

The Boxwood Kitchen, which opened Jan. 3, is hip but not too hip. It’s spacious, but it maintains a sense of intimacy. And the food might be characterized as gourmet comfort food, albeit with executive chef and co-owner Eric Rud’s unique twists.

You probably won’t see Boxwood on a casual drive through the Old Mill. It’s as discreetly positioned as a shopping-center restaurant can be, on the back side of Building C, behind Jimmy John’s sandwiches and in the same structure as the Naked Winery. But that hasn’t stopped Rud and co-owner Riane Welch from drawing a steady clientele to the restaurant, whose name is as obscure as its location.

The Boxwood Kitchen, if you were wondering, has nothing in common with the nearby Box Factory. Gardeners will know the Oregon boxwood as a rugged evergreen shrub, a relative of the myrtle, often used in hedges and boundary lines.

“We chose the name Boxwood mainly because we had no idea what to name the business,” Rud said. “We had a lot of terrible ideas. Our logo, which was already done, has a leaf in it, so I started searching for shrubs native to Bend and Central Oregon. I found the boxwood, and we just liked the way it sounded.”

The name, really, is irrelevant. It’s the food that will keep diners coming back for more.

My dining companion and I didn’t love everything when we were joined by another couple for dinner here. But the Korean fried chicken bits ($12), prepared barbecue-style with a miso glaze, and served with shreds of pickled daikon radish and shrimp chips, were delicious. And Boxwood’s Brussels sprouts ($11) were superb. Sautéed in sesame oil with ponzu sauce and lime, they are perhaps the best in Bend.

Of two salads, we preferred the crisp kale Caesar ($10), with sunflower seeds, pecorino cheese and an avocado dressing. But the more typically French-style Lyonnaise salad ($12), incorporating bacon and egg, was very good but didn’t jump with as much flavor.

A disappointment was the French onion soup ($12), which Rud has since removed from the menu. Caramelized onions and fondue-style raclette cheese were perfect in the broth. The problem was the garlic crouton, an excessively thirsty slice of dry French bread that soaked up all the soup and left nothing to slurp.

Among the entrees, each of our party of four ordered something different, shared tastes and talked about how good the other person’s choice was.

The biggest surprise, perhaps, was the fish of the day — monkfish, a robust seafood sometimes called “the poor man’s lobster,” served up in a savory and moderately spicy Thai red curry ($26). Lesser fish would not stand up to a curry as monkfish can. It was served with a blend of baby carrots, bok choy and “forbidden” (black) rice, giving it a distinctly Asian sensibility.

Among the rest of us, hanger steak ($26) was nicely seasoned and cooked to order, medium rare. It came with a cheese-stuffed baked potato, wrapped in bacon. A pork chop ($24) in a hoisin glaze, with potato hash, came with a unique Brussels sprouts kimchi that got mixed reviews from our party: It was too spicy for some, but I liked it. I opted for Boxwood’s vegetarian ricotta gnocchi ($17) and added chicken (pork was another option) for an extra $4. Sliced mushrooms and smoked shallots boosted this cheesy pasta plate.

A subsequent lunch visit impressed us even more than dinner. Indeed, my companion opined that she would return, time and again, just for the albacore tuna bowl ($15). The fish, seared medium, was tossed with black rice, a variety of vegetables (kale, cucumber, picked red onion and baby carrots) and avocado in a miso vinaigrette that lent just the right amount of tang and moisture to the mix.

My wagyu beef burger ($15) was likewise delicious, dressed with bacon jam and chipotle aioli, served with aged cheddar cheese and peppery arugula rather than lettuce. It was presented on a very lightly grilled Big Ed’s bakery bun; had the bread been warmer, the burger would have been perfect. House-cut fries were excellent.

Boxwood’s menu is revised on a weekly basis to incorporate seasonal ingredients. It always includes a selection of desserts from Bend’s Foxtail Bakeshop: On our recent visits, that meant a blood-orange cheesecake and a passion-fruit torte. Both were outstanding.

At both of our meals, service was outstanding. We were greeted at the door, shown to a table, and offered drinks. Our attendants described the menu offerings, and were prompt and friendly throughout.

The culinary performance takes place in a single large room, seating 54, with a rolling garage door that will welcome summer breezes when the weather is warmer. Tables are well spaced beneath high ceilings, allowing individual conversations to remain private.

Rud, 43, is a San Francisco native who spent his school years in Germany as part of a military family. He returned to the United States to attend cordon bleu cooking school in Minneapolis, re-emerging in the Bay Area in 2005 as the opening chef at the Nob Hill Grill and, subsequently, the co-owner of Aliment.

In January 2017, he and Welch moved to Bend, where her parents lived. The home delivery of lunches and dinners was becoming popular in San Francisco, and they saw a niche for a similar service here. But that business didn’t thrive as they had hoped, and the Boxwood Kitchen slowly morphed into selling its bowls and salads direct to grocery stores.

Something good came of it, however. The Old Mill’s management team was a fan. “They approached us, showed us this space and made us a generous offer,” Rud recalled. By late last year, they were moving into their new space, which opened the first week of 2019.

Rud and Welch, the front-of-house and behind-the-scenes partner, have hopes of kicking off an occasional supper club concept this spring, with special dinners and entertainment. They are targeting late spring for the first events.

— John Gottberg Anderson can be reached at janderson@bendbulletin.com.