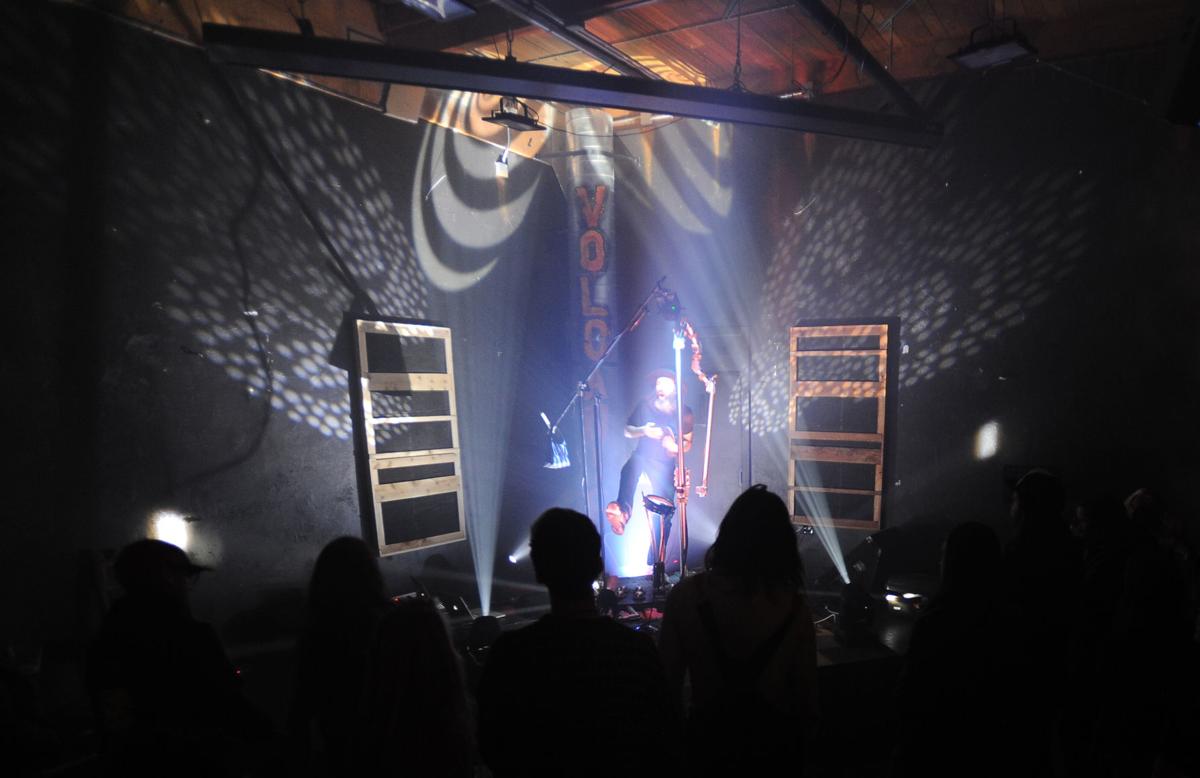 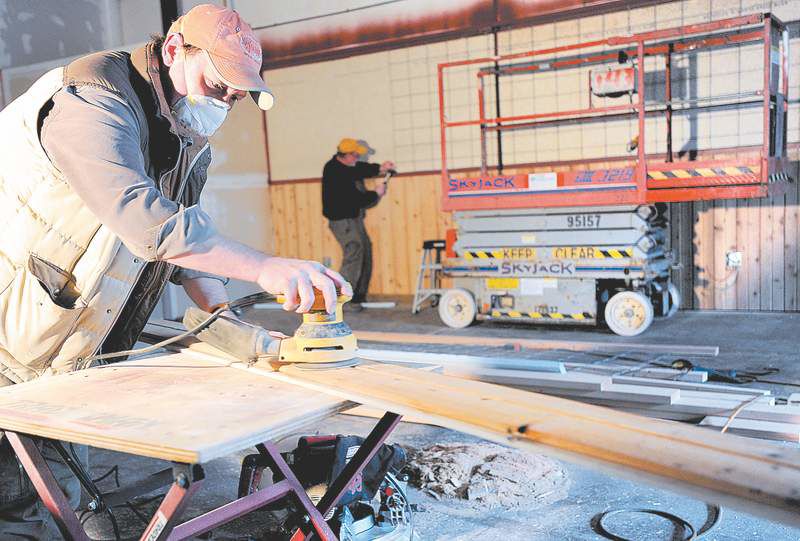 Derek Sitter sands pieces of wood to be used as siding while Don Tompos hangs metal grates for the Volcanic Theatre Pub in Bend’s Century Center on Wednesday. 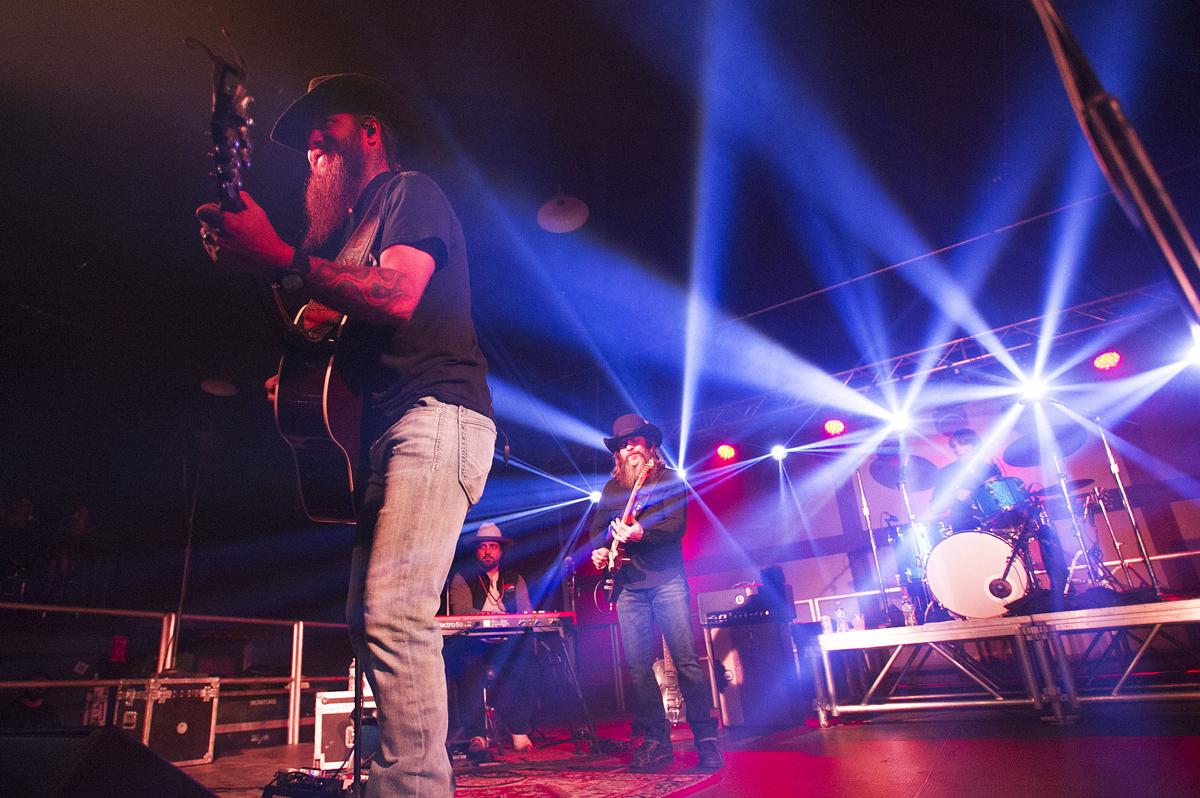 Derek Sitter sands pieces of wood to be used as siding while Don Tompos hangs metal grates for the Volcanic Theatre Pub in Bend’s Century Center on Wednesday.

The day the pandemic shut down Oregon was a dark one for Jim Brunberg.

The musician and co-owner of Portland music venues Mississippi Studios, Revolution Hall and Polaris Hall canceled all shows at his venues. His businesses, and indeed most music venues and community event centers across Oregon, have been closed for four months now.

Brunberg realized this was going to affect everybody in the country. He looked to Seattle, where the virus had already hit, and Seattle venues’ efforts to lobby for relief funds from King County.

“I said, ‘Well, I think we’re gonna need some relief funds,’” Brunberg said. “And so I started to put together different strategies and got in touch with every other venue that I could find across the state, learned about some venues that I wasn’t aware of previously and just started getting people together to write letters to their state senators and state congressmen to make people aware of the issue. There’s just so much going on right now that a lot of people understandably would never think, ‘Oh, entertainment venues.’ It’s not really gotten any national attention until just recently.”

Through this networking, the Independent Venue Coalition — including local venues such as Volcanic Theatre Pub, Midtown Ballroom and The Belfry — was formed to lobby for financial help for music venues in the wake of the pandemic. Last week the coalition’s work paid off.

The Oregon Legislature’s Joint Emergency Board on July 14 allocated more than $200 million from the federal Coronavirus Relief Fund for Oregonians, small businesses and organizations affected by the pandemic.

This includes $50 million in grants to music, arts and community venues and organizations that have had to close, postpone or cancel events due to the shut down across the state.

Portions of the fund will also give $25.6 million to emergency assistance for small businesses , $62 million to the Oregon Cares Fund for Black Relief and Resiliency, $30 million to the COVID Leave Fund and $35 million to fund $500 Emergency Relief Checks to Oregonians still waiting on unemployment benefits.

“Performance entities that are facing existential crises are going to be helped thanks to some real leadership at the state level,” Brunberg said. “It amounts to less than 1% of the CRF money, but it’s a meaningful 1% of that CRF money. It’s a part of the Coronavirus Relief Funds that everybody in the state can participate in when they go to their local theater or their local community center, or they go see a show at a venue because the state decided that the arts were important enough to put this investment in. And hopefully the result is — we’ve already turned a couple (venues) around that were facing definite bankruptcy.”

Where the arts funds will go

According to the committee meeting document from the Oregon Legislature, the $50 million for music and arts venues includes more than $24 million that will be distributed as grants to various Oregon venues and organizations via the Department of Administrative Services. The document lists the venues, theaters and organizations, private and nonprofit, that will benefit from these funds, as well as the amount. The largest grant locally is $700,000 to the High Desert Museum.

Rep. John Lively , D -Springfield, who chaired the workgroup that developed the proposal, said he expects these funds to be distributed by mid-August.

“We just followed their recommendations,” Lively said. “We didn’t ultimately recommend they get 10 months — we only recommended six months of funding. But we did recommend based on all the work they had done, showing their costs and what the reasons were.”

The rest of the fund — just less than $26 million — will make up grants to other arts, music and culture venues and organizations that are not specifically listed as receiving grants. The Oregon Cultural Trust will distribute the funds to county and tribal cultural organizations.

“The $26 … million is going to be handled through a process of the Oregon Cultural Trust and the Oregon Arts Commission,” Lively said. “So they already have a network throughout the state that does grants to venues, arts and cultural venues throughout the state on an annual basis. So we’re going to use that same network to identify within the communities and the regions what their priorities are. … The funds will be distributed through that network instead of through the state Business Development Department.”

Central Oregon venue owners reacted positively to the news. Jim Dickey, owner of the Midtown Ballroom and Domino Room, said via text that “hopefully it will help me keep the doors open.”

Derek Sitter, owner of Volcanic Theatre Pub, recently closed the venue’s doors again due to spikes in COVID-19 cases across the state, after opening for socially distanced local shows in June. The grant will allow him to pay rent, utilities and his employees through December, he said.

“Essentially we included everything that we spent monthly on bills,” Sitter said. “I think what they reduced it to was, OK, here it is — we’re gonna give you your rent, utilities and payroll and that’s it. And that doesn’t include insurance, it doesn’t cover the other monthly bills that you have to pay for the venue, licenses and permits, etc., etc., etc. It doesn’t cover any of that. They’re just giving you enough to say, ‘Hey, here you are, pay your rent, pay your utilities, pay yourself and any employees, and you’re welcome.’ Thank you. It’s a big deal.”

Sitter and Brunberg both credit the state Legislature’s Emergency Board for passing the relief allocation. While debate about relief for arts organizations continues on a federal level, spearheaded by the National Independent Venue Association, Oregon is one of the first, if not the first, state to actually pass some form of pandemic relief for arts and music venues.

“I’m just proud I live in Oregon,” Sitter said. “It’s a big deal. It shows that when you live in a state that is supporting all of the artistic venues in the state with their funds, that’s a big deal because that money could be distributed in so many different ways depending on where you live. And Oregon chose — and because of the IVC — Oregon chose that, hey, we’ve gotta help those people out. And they voted, and yes. I mean, again, my shoulders dropped about 3 inches (when I found out).”

Moving forward, the Independent Venue Coalition will continue to advocate for more federal relief alongside the National Independent Venue Association. This includes pushing for the recently introduced RESTART Act to support small and midsized businesses affected by the pandemic.

The coalition also plans to share what it has learned from this experience with other regions and industries looking for relief. While venues remain closed, the coalition will work on mentorship programs for business owners of color.

“One thing we learned is that there aren’t any venues in the state of Oregon — I shouldn’t say zero, but there are very few entities that are owned and operated by people of color,” Brunberg said. “… Several venues in Portland are participating in a new mentorship program so that there can be a Portland venue (owned by a person of color) someday — and this isn’t directly coming from the funds that we just got, but it’s coming from the opportunity to breathe and to self-reflect.”

The coalition will also advocate for venues and organizations not specifically listed as beneficiaries via the Department of Administrative Services to receive funds from the $26 million through the Oregon Cultural Trust. This includes the Tower Theatre, which was left off the list.

“They will get help because they’re going to be applying to this larger fund that is available,” Brunberg said. “They weren’t on the list of dedicated venues simply because time was tight and the outreach was not 100 % comprehensive. But we’re going to advocate and we’re going to make up for that and include them.”