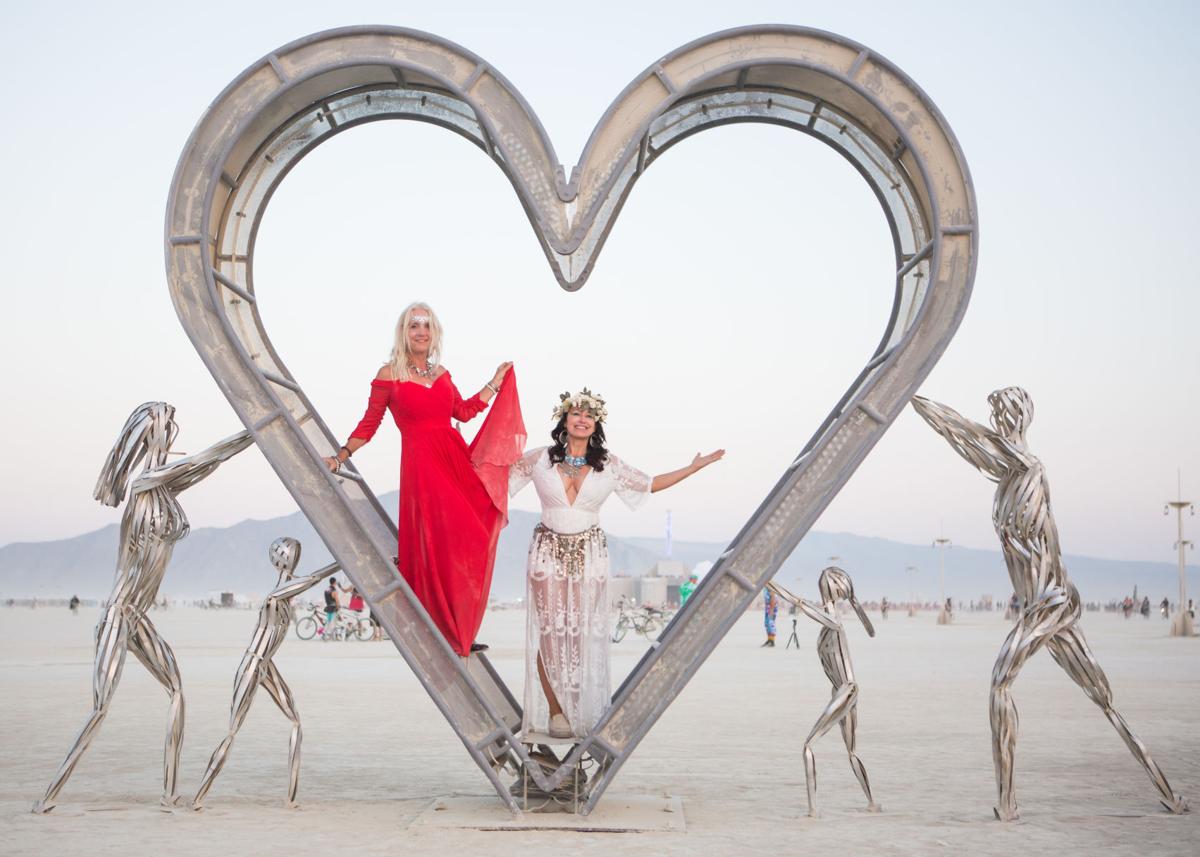 "Identity Awareness-Family," by artist Shane Pitzer, as seen on the playa at Burning Man. "Infinite Moment," a new, original exhibit coming to the High Desert Museum, features such interactive installations from the annual event in Black Rock Desert in Nevada. 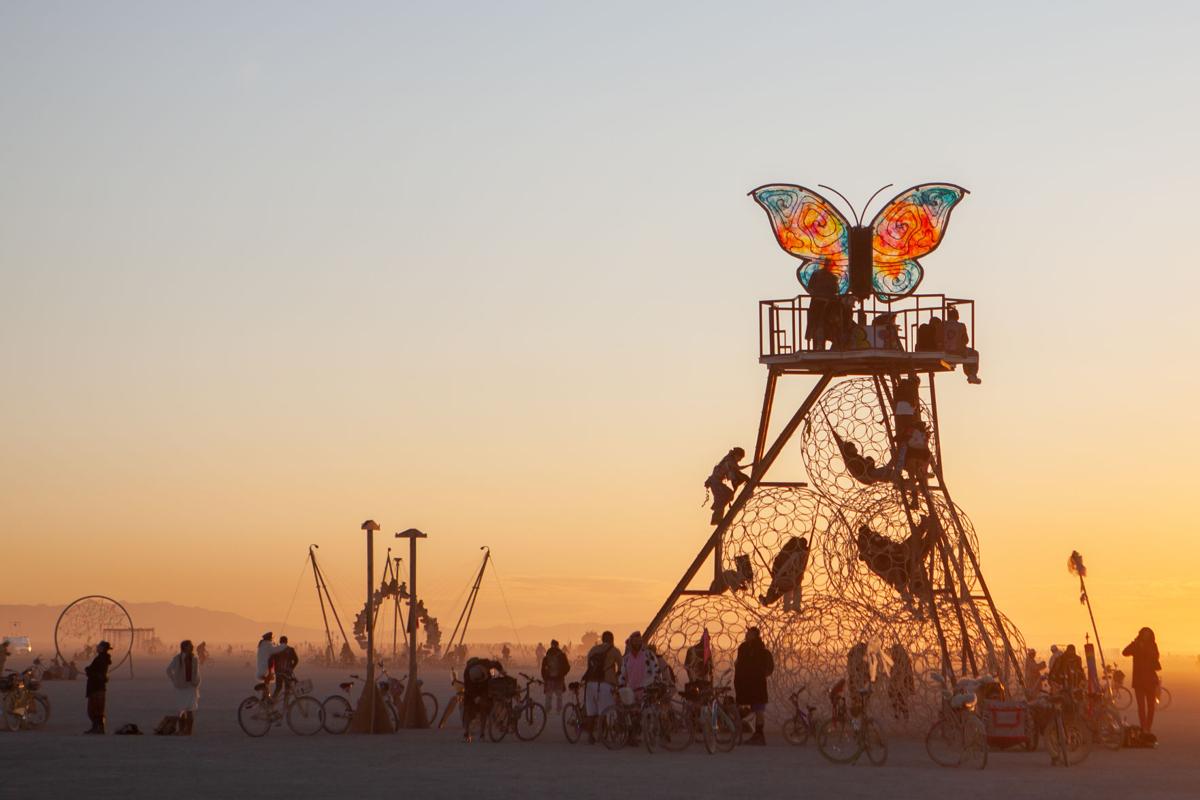 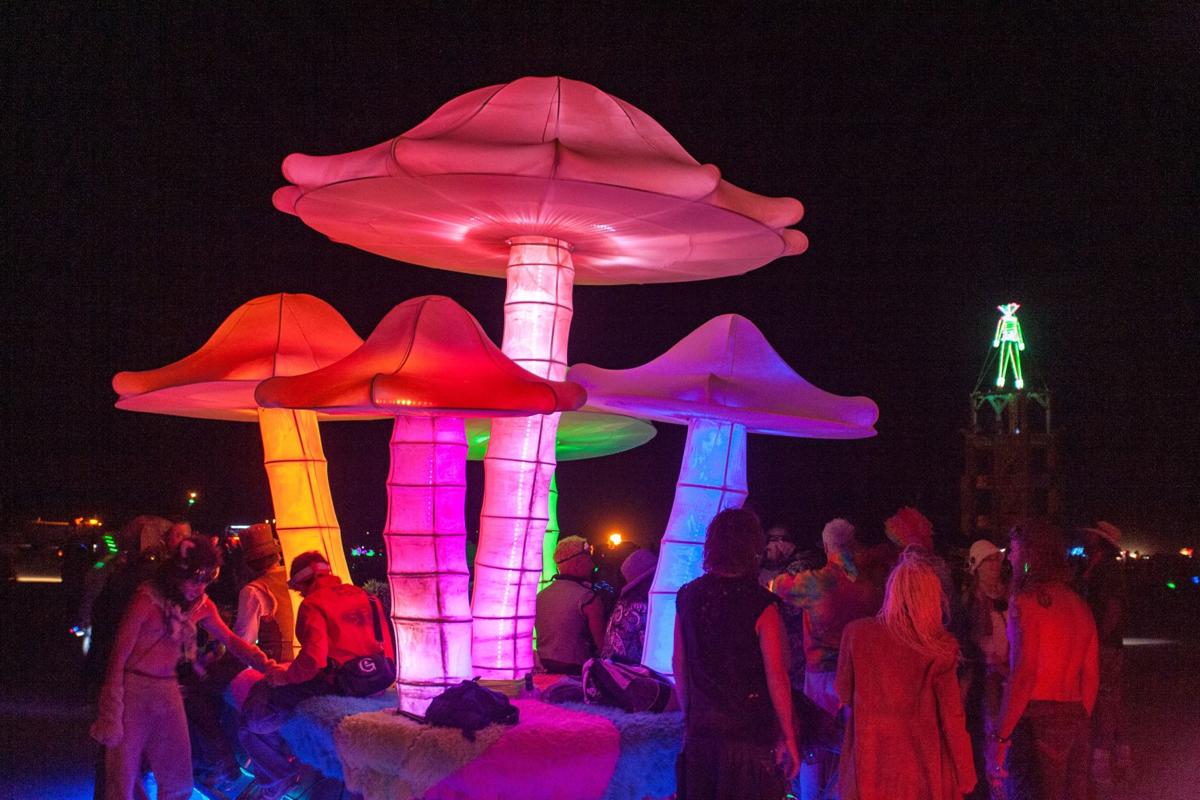 "Mushroom Car," an art car photographed at Burning Man, the annual event in the Black Rock Desert of Nevada. 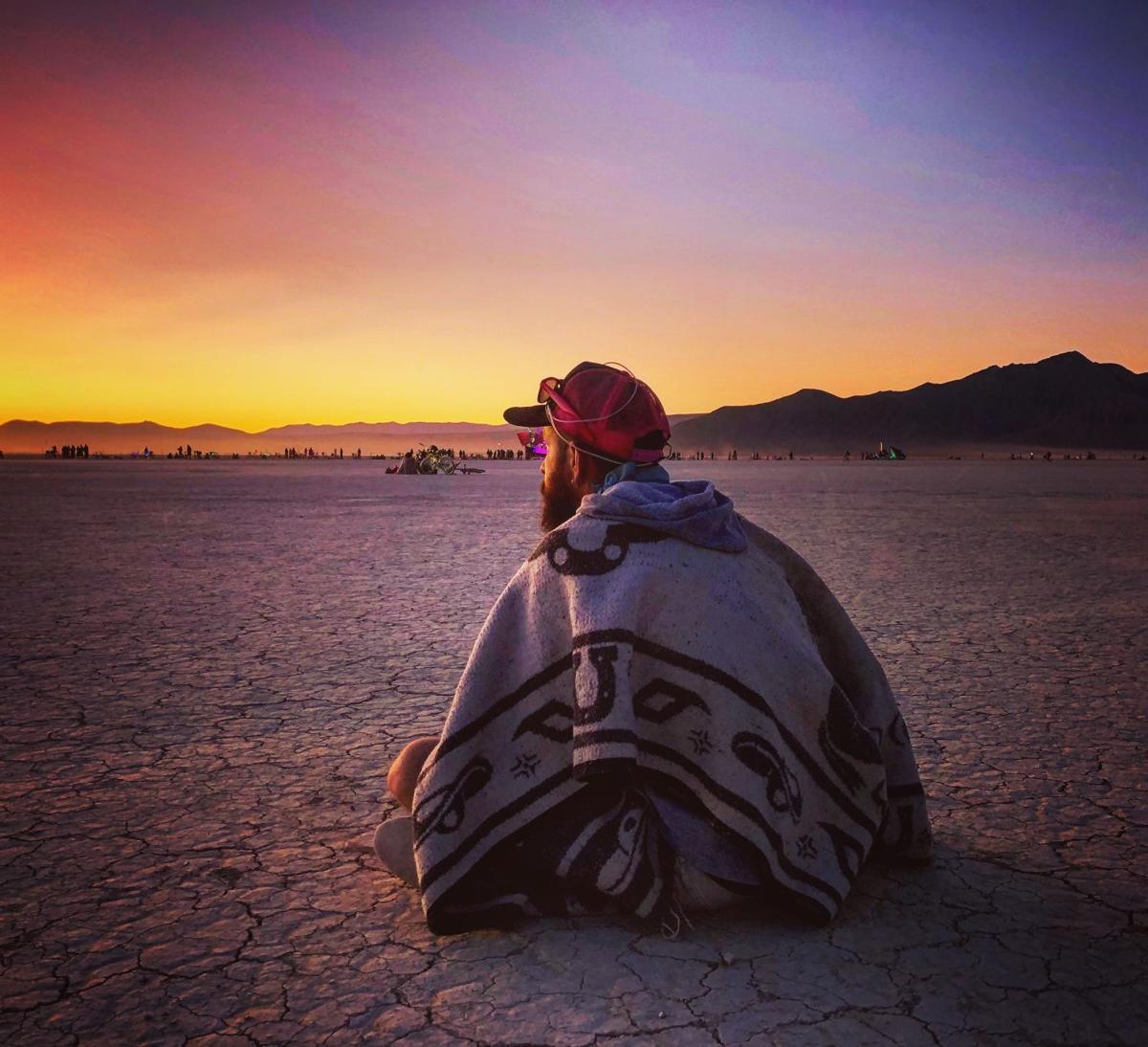 A man takes in the view while sitting on the floor of Black Rock Desert, where Burning Man draws 80,000 souls each summer.

"Identity Awareness-Family," by artist Shane Pitzer, as seen on the playa at Burning Man. "Infinite Moment," a new, original exhibit coming to the High Desert Museum, features such interactive installations from the annual event in Black Rock Desert in Nevada.

"Mushroom Car," an art car photographed at Burning Man, the annual event in the Black Rock Desert of Nevada.

A man takes in the view while sitting on the floor of Black Rock Desert, where Burning Man draws 80,000 souls each summer.

Good luck scoring a ticket to Burning Man, the annual art and counter-cultural event whose hallmark is the burning of a colossal effigy of a man in the Nevada Desert.

Tickets for the event, which draws tens of thousands, are priced at $425. When they go on sale, they tend to sell out “almost instantly,” said Katie Hazard, associate director of Burning Man Arts.

Best wishes if you’re of a mind to go. But if you’d like a taste of the event, or at least its massive art installations, without departing Bend or parting with quite so much cash, you can head to the High Desert Museum starting Saturday.

Yes, Burning Man, which began with the setting alight of an 8-foot effigy of a man over 30 years ago on a California beach, is now the stuff of museum exhibits.

The new and original exhibit “Infinite Moment: Burning Man on the Horizon” features, among other elements, several large, interactive installation pieces inspired by the annual event, which draws some 80,000 “Burners” to northwestern Nevada’s Black Rock Desert for eight days of commerce-free community and creativity each summer. The only things sold are the precious commodities of coffee and ice. Burning Man is a strictly “leave no trace” event, and everything hauled in — including art, some 10 % of which gets burned — must be hauled out.

The exhibit opens Saturday at the High Desert Museum, where it will show through early October.

“This exhibit has been on our minds for a while. We’re always trying to tell different kinds of stories about the High Desert, and this is a unique High Desert story,” said Senior Curator of Western History Laura Ferguson, who co-curated “Infinite Moment” with Dustin Cockerham, chief exhibitions preparator.

The very nature of the High Desert plays a role in shaping Black Rock City, the community that is planned, erected and dismantled each year for Burning Man, said Ferguson, who attended the event last year in preparation for the exhibition.

“It’s fairly remote. It’s a really beautiful landscape. A former lake bed with white silt and really bright blue skies,” she said. “It creates a really unique place for people to come together and support one another and also a really interesting backdrop for the art.”

In the spirit of Burning Man, Ferguson and Cockerham have created an immersive experience for museum visitors in “Infinite Moment.”

“(Like) being on the playa, we hope that visitors will have a chance to come and discover something new,” Ferguson explained. “Many of the pieces come to life through visitors’ participation and engagement. They play with color, light and sound.”

As an example, she points to “Light Chimes,” a piece made by Sticky Co. (with sound design by little hexes), which lights up and makes sound as visitors move beneath it. The idea behind this piece and ones like “Ghost Truck One,” co-created by Jesse Small and the High Desert Museum, is to give visitors a chance “to play, explore and connect with one another,” Ferguson said.

Burning Man started in 1986, when artist Larry Harvey (1948-2018) and friend Jerry James built and set ablaze the first effigy of a man to mark the summer solstice. That year, the man burned in front of a crowd of just 20 of their friends on Baker Beach in San Francisco.

The event became annual, drawing ever -larger crowds, and in 1990, organizers moved Burning Man to the Black Rock Desert, where it’s only continued to grow. Last year’s event drew a crowd of 80,000 to the event, which is held on BLM land on a former lake bed, which Burners call the playa.

Hazard, of Burning Man Arts, attended for the first time in 2000, a detour when she was en route back to her home in Boston after visiting Australia and New Zealand.

“On my way back to Boston, I stopped off in San Francisco to visit a best friend from high school who lived here. She was like, ‘I’m going to this weird camp-out thing next week. I don’t really know what it is. You should stay and come with me,’” Hazard said. “I didn’t know what I was getting into at all.”

But it was in her wheelhouse, as she’d attended Rainbow Gatherings and similar events. There were about 20,000 to 22,000 attendees that year. Hazard continued to go to successive Burning Man events, and volunteered there for a 10-year period. She joined the staff in 2013.

“Sometimes I meet people that are like, ‘Oh, wow, you can work for Burning Man?’” Hazard said. Such people might also be surprised to learn there are 130 full-time, year-round employees of the nonprofit organization. Still more are hired seasonally, and there are an additional, whopping 8,000 volunteers.

But, argues Hazard, when you consider the massive scale of the event, it shouldn’t be startling.

“We hear that a lot, but (there are) 75,000 people for eight days, in a city that starts from nothing and then disappears,” she said. “Those of us that organize the event, we really think of Black Rock City as a city. It’s like a city anywhere else in the country. It’s got full infrastructure. It’s got roads and a hospital and a post office and libraries and bars and cafes and a full-on medical service. You know, everything that you would have in a normal city.”

She believes there’s also a misconception about the partying aspect of Burning Man.

“I was watching some YouTube videos someone forwarded me the other day that talked about, like, ‘the 70,000 partygoers.’ I was like, ‘That’s not really true,’” Hazard said. “There are probably — I’m just making this number up wildly — 10 or 20,000 partygoers, sure, because that’s one element there.”

Another major component is the art. Large, colorful, loud, electrifying installations that the artists intend people to climb on and otherwise interact with.

“We build the fence, we survey the city, we build the roads,” she said. The artists follow not far behind; they start to arrive late in the first week of August to begin assembling their often massive works. Last year, there were 415 art installations at Burning Man. Some artists, often working in teams, will have spent the entire year between events creating their works.

“That’s one of the things that I love the most about Burning Man art,” Hazard said. “For us, it’s so much about the whole process as well as the product. In the end, you have this amazing sculpture that all these thousands of people get to enjoy, and have experience on, and most of the art is interactive. But for me, over the years I’ve been going, where I see the real value lies is that people spend up to a year working on building these art projects.”

She says there is a concept of “no spectators” among people who’ve been to Burning Man more than once.

“The first year you come, you’re probably still feeling things out, but when you come back after that, you find a way to get engage in whatever your way is,” Hazard said. It could be giving away grilled cheese sandwiches, or setting up an advice booth, she said.

And for some that’s making art.

The work required to fund, build and ultimately get artwork out to the desert affords Burner artists the opportunity to develop a range of skills, from using a nail gun to fundraising, Hazard said.

“I love the way that people learn some of these things, and then the relationships that are formed, the communities that are built as a result of working on things together. If you work on a project with another person, you usually, hopefully, come out of it on the other side closer to that person.”

There are regulations and safety requirements if someone wants to burn their piece at Burning Man’s end. Many pieces that aren’t set ablaze are dismantled and sometimes go on to find public placement.

“We do sometimes have cities and towns and places reaching out to us saying, ‘Do you know of any Burning Man art that’s looking for a home?’ and we can sometimes help,” Hazard said. “On our website, we can look through all the art that came to Burning Man that year, and see if there are artists from their area.”

While the High Desert Museum is not the first institution to do a Burning Man exhibit, she ardently appreciates its, so far, singular approach.

“Other museums that have done exhibits about Burning Man have really sourced all of the objects from outside the museum,” Hazard said. “What I love about the exhibit that’s going on there — it’s like the most Burning Man thing to me — is that the folks from the museum came to Burning Man last year and experienced the whole thing. … But what they’re doing is building their own stuff as a result of seeing what it’s like. That, to me, epitomizes the spirit of what we’re trying to do. They’re not just getting someone else to do it. They’re not being spectators.”

What: "Infinite Moment: Burning Man on the Horizon"