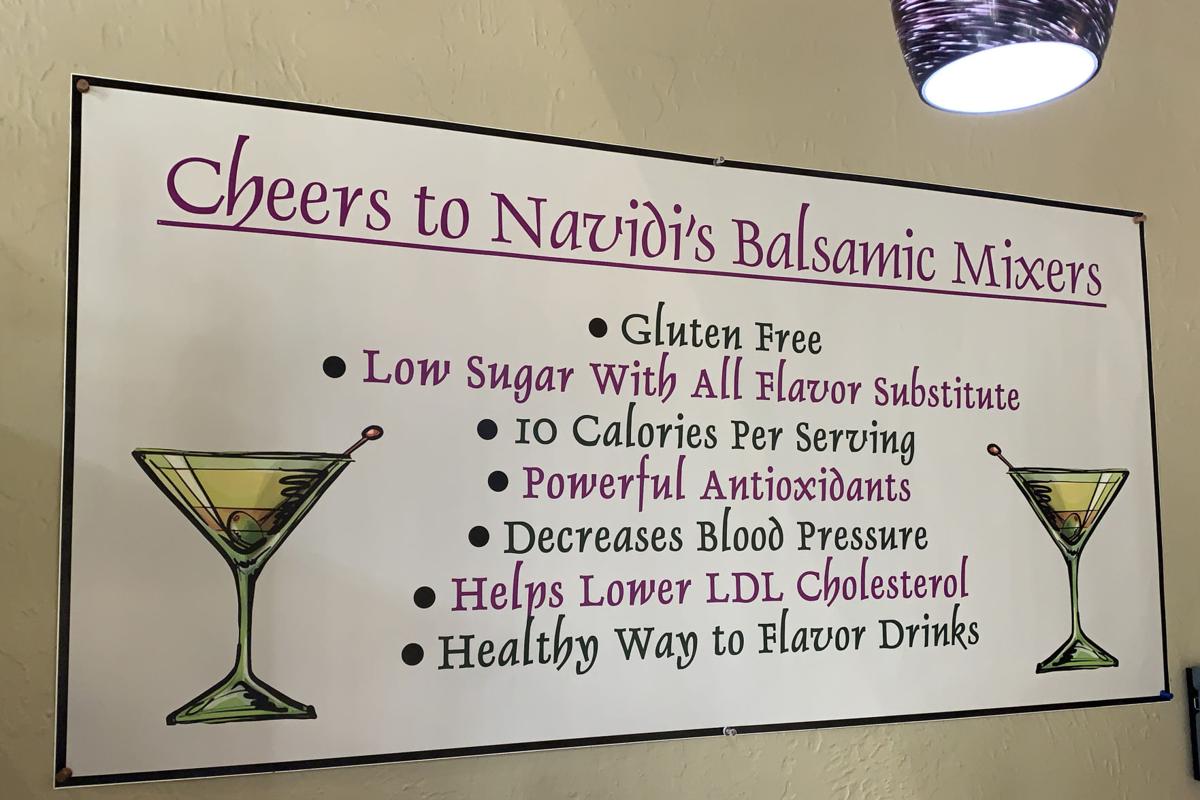 Sign at Navidi’s Olive Olis and Vinegars touts the health benefits of balsamic vinegar. (Barb Gonzalez / For The Bulletin) 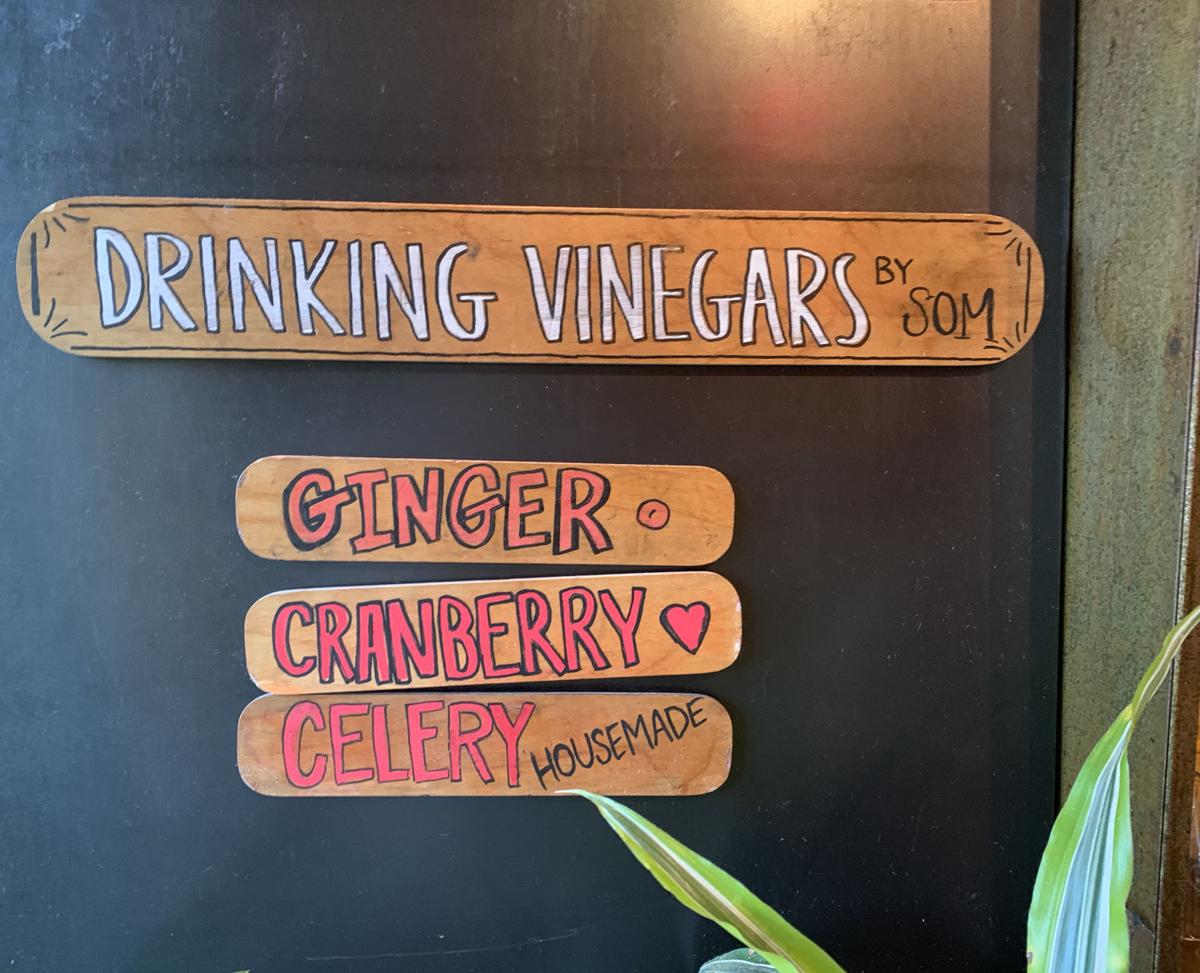 Spork offers a housemade drinking vinegar along with Som Vinegars from Pok Pok in Portland. (Barb Gonzalez / For The Bulletin) 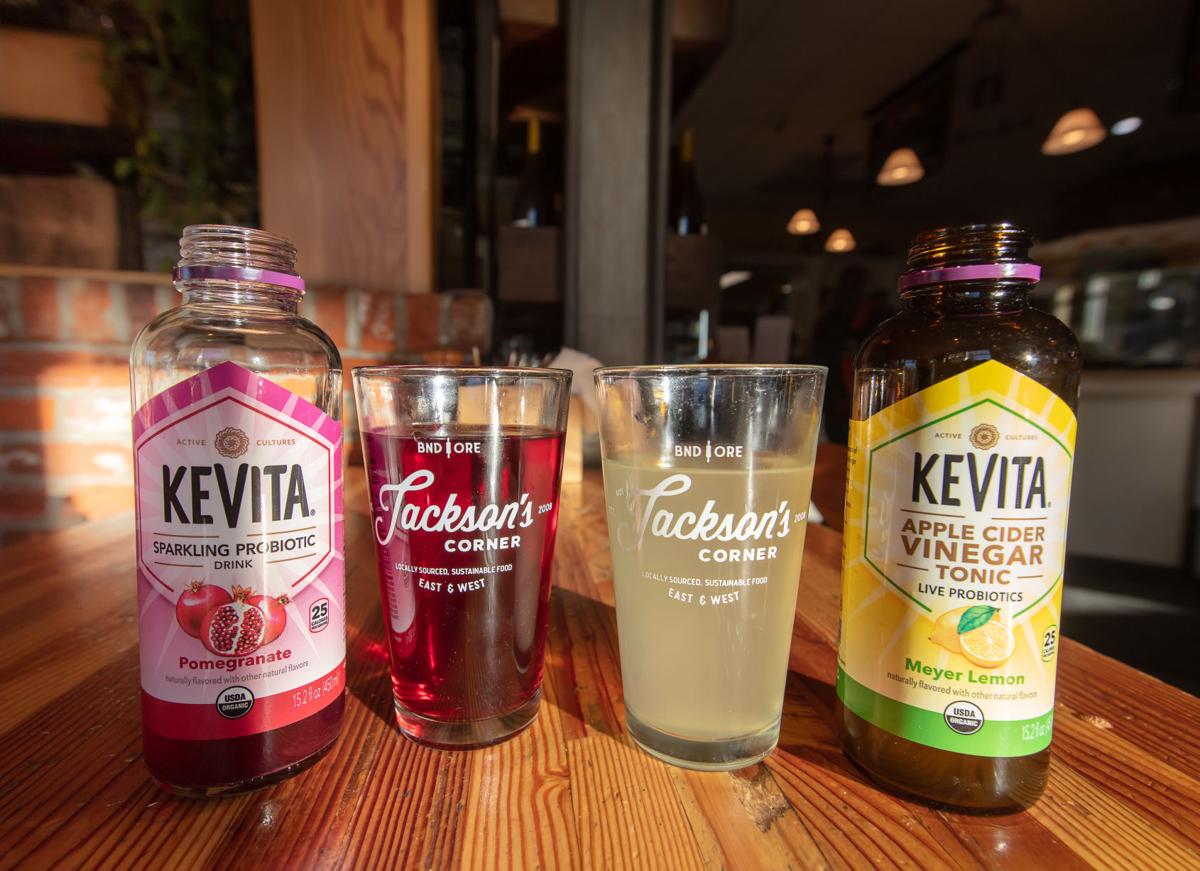 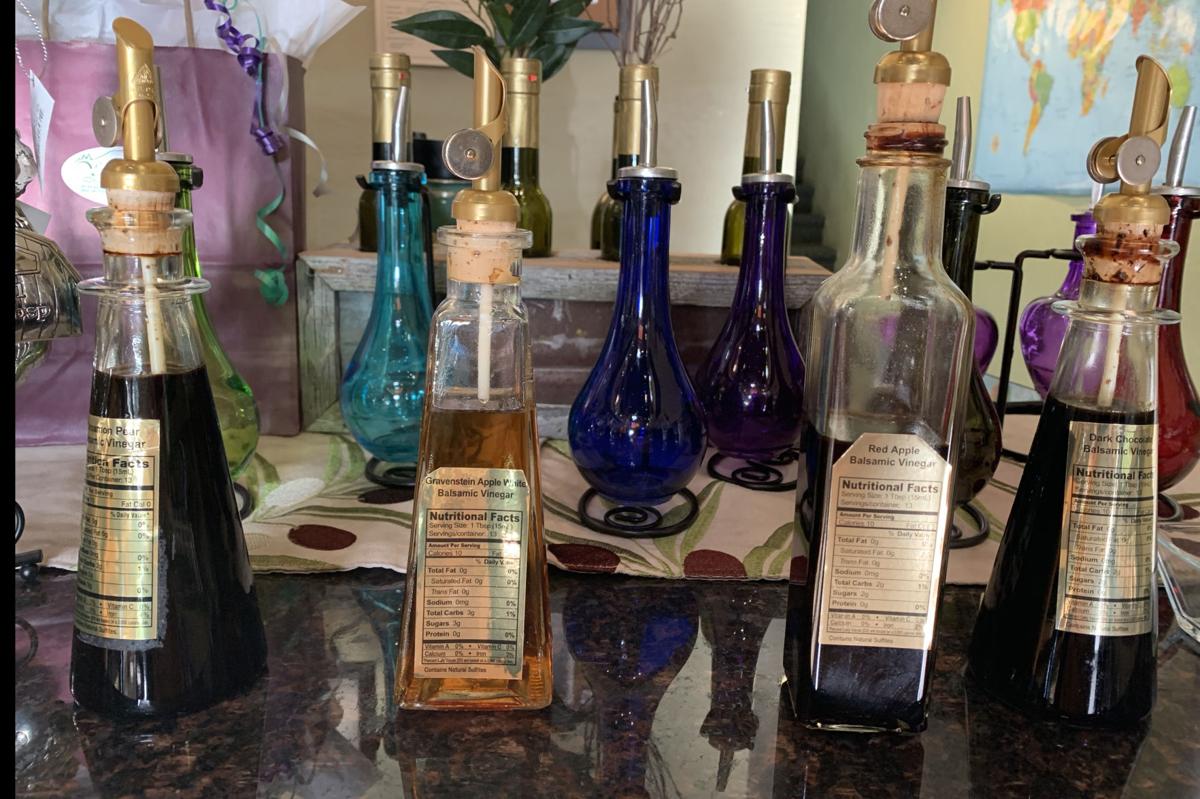 Flavored balsamic vinegars at Navidi’s Olive Oils and Vinegars are available for tasting alone or with New Basin spirits. 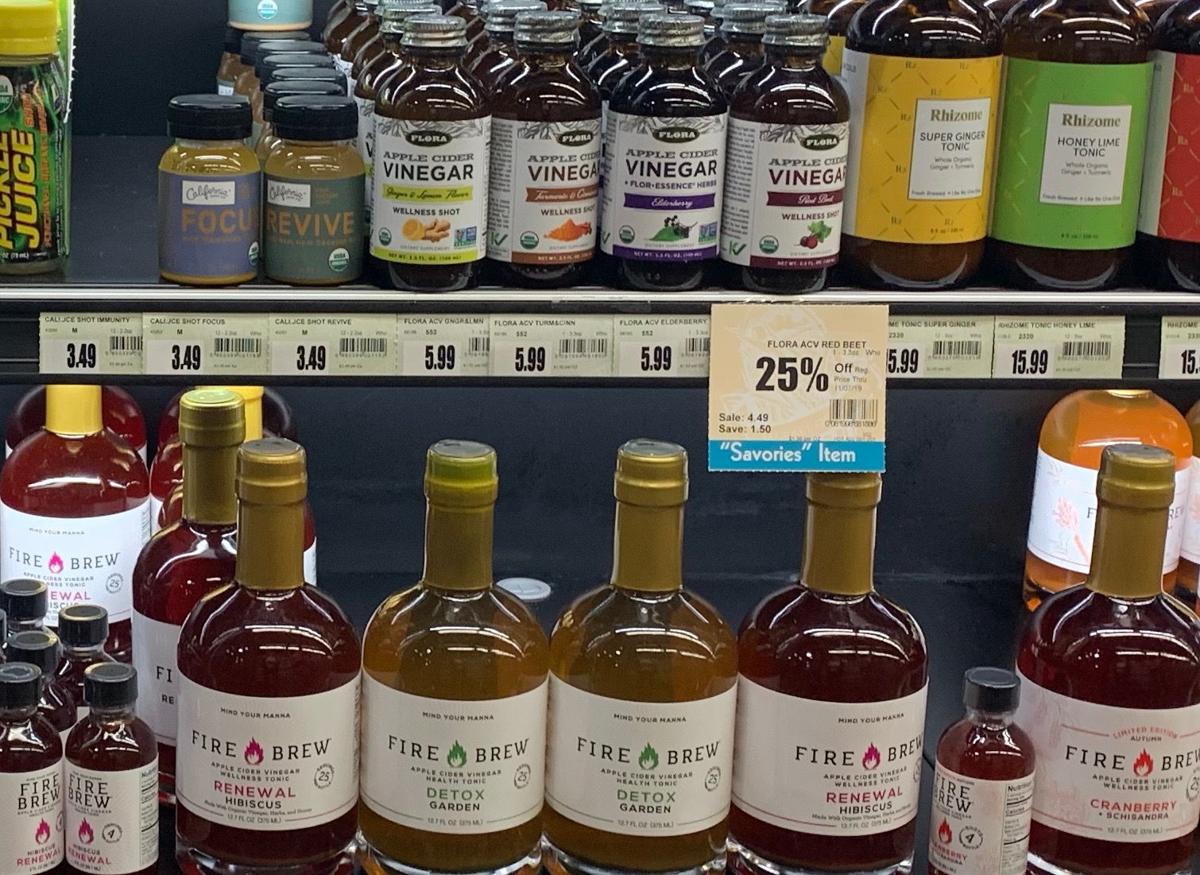 Sign at Navidi’s Olive Olis and Vinegars touts the health benefits of balsamic vinegar. (Barb Gonzalez / For The Bulletin)

Spork offers a housemade drinking vinegar along with Som Vinegars from Pok Pok in Portland. (Barb Gonzalez / For The Bulletin)

Flavored balsamic vinegars at Navidi’s Olive Oils and Vinegars are available for tasting alone or with New Basin spirits.

Juices and still or carbonated water are combined with the vinegar to create tonics or elixirs that are increasingly found in restaurants and supermarkets in Central Oregon. The juice mellows the strong taste of the apple cider vinegar and cuts the acid to make it easier to drink.

While most drinking vinegar is bottled, some restaurants make their own. Navidi’s Oil sells fruit-flavored balsamic vinegar that you can add to water or soda water to create your own drinks.

What is behind the recent popularity of drinking vinegar? It appears to be an offshoot of the kombucha craze. With kombucha, people started noticing the benefits of sour, fermented foods. Like kombucha, apple cider vinegar is created using a mother. It’s that foggy mass at the bottom of the bottle that is the catalyst giving rise to the vinegar. The mother is filled with probiotics — good bacteria that balance your digestive system — and enzymes that make it easier for your body to break down food.

Research points to many benefits of drinking raw apple cider vinegar daily. It may lower high blood pressure, reduce cholesterol and increase insulin sensitivity, which can lower the risk of heart disease and diabetes. It is excellent for the respiratory tract because the acid in the vinegar helps cut the buildup of mucus.

Contrary to what you might think, vinegar even helps those with acid reflux because it helps break down proteins and fats. Your stomach doesn’t need to create as much acid for digestion. When minerals and herbs are added to the vinegar drink, it aids in delivering its benefits into the bloodstream.

All vinegar is made of acetic acid and shares many of the benefits of apple cider vinegar. Even though balsamic vinegar doesn’t have the same probiotic digestive properties because it doesn’t have a mother, it is said that it decreases blood pressure and helps lower cholesterol. A sign in Navidi’s Olive Oils and Vinegars touts other healthy features of Balsamic Mixers: gluten free, low sugar, 10 calories per serving and powerful antioxidants. The store carries 26 flavors of aged Italian balsamic vinegar.

Adding water to a one-half teaspoonful of flavored balsamic creates a tasty beverage. I tried several flavors, including the Cascadian White Raspberry Balsamic, which has a refreshing berry taste lighter than the Raspberry Balsamic. The Cara Cara Orange and Vanilla Balsamic tasted like a Creamsicle.

Manager Kim Cress told me that some customers use balsamic vinegar to kick a soft-drink habit.

“The black cherry balsamic and soda water looks like cola and is a low-calorie, sweet-tasting drink that can help ween you off of a soda addiction,” she said.

In the coming weeks, Navidi’s will be adding to the available tastings as they partner with the New Basin Distilling Company out of Madras. To start, they plan to bring in New Basin’s vodka, whiskey and gin. Customers will be able to taste a flight of the spirits, or of signature cocktails made with balsamic vinegar. The honey ginger balsamic will be paired with vodka for a unique Moscow Mule. Grapefruit balsamic vinegar can mix with vodka for a greyhound. Black cherry balsamic can be used with whiskey to make an old-fashioned.

If you are looking for some house-made apple cider vinegar shrubs, you can find them at Spork. I tried the celery drinking vinegar made with apple cider vinegar, which paired nicely with a green curry and rice bowl. Spork serves Som drinking vinegar, which was created by Andy Ricker, chef/owner of Pok Pok in Portland. The ginger and the cranberry Som drinks complement Ricker’s Thai street food.

The west-side Jackson’s Corner carries bottles of Kevita probiotic drinks that include apple cider vinegar. The bottles can be found in drink cases.

Bottles of apple cider vinegar based drinks are available in many places where kombucha is sold. For example, The Market of Choice has many flavors. At checkout, I got an education about drinking vinegar from Adam Wood, an apprentice clerk. I bought a couple of bottles to try.

Be sure when you buy a bottle of drinking vinegar that you check the number of servings in a bottle. Some bottles include one or two servings. A small bottle of Fire Brew health was concentrated apple cider vinegar. After one strong swig, I discovered it had four servings in the bottle.

If the health benefits interest you, finding flavors that mellow out the vinegar will make it easier to drink. For a milder, more drinkable option, consider tasting the balsamic vinegar. If you prefer to mix your healthy drinks when you imbibe, check out the new tasting room at Navidi’s.