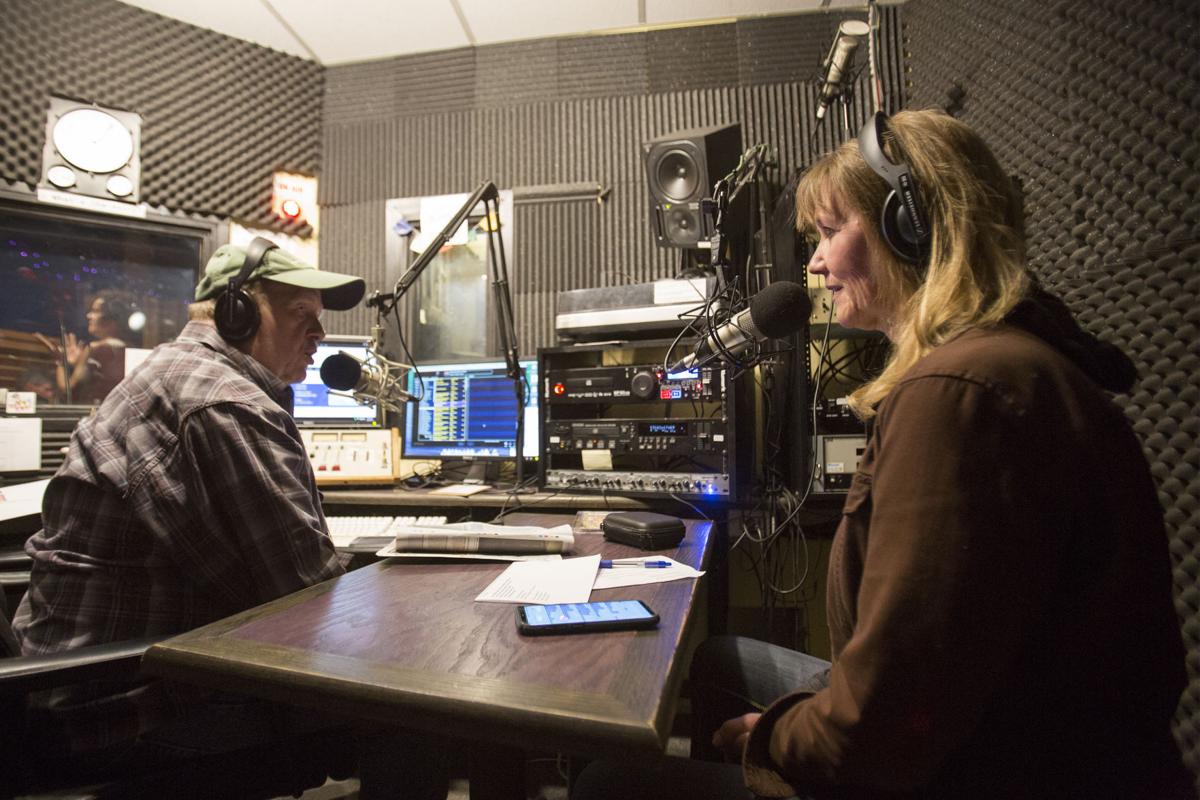 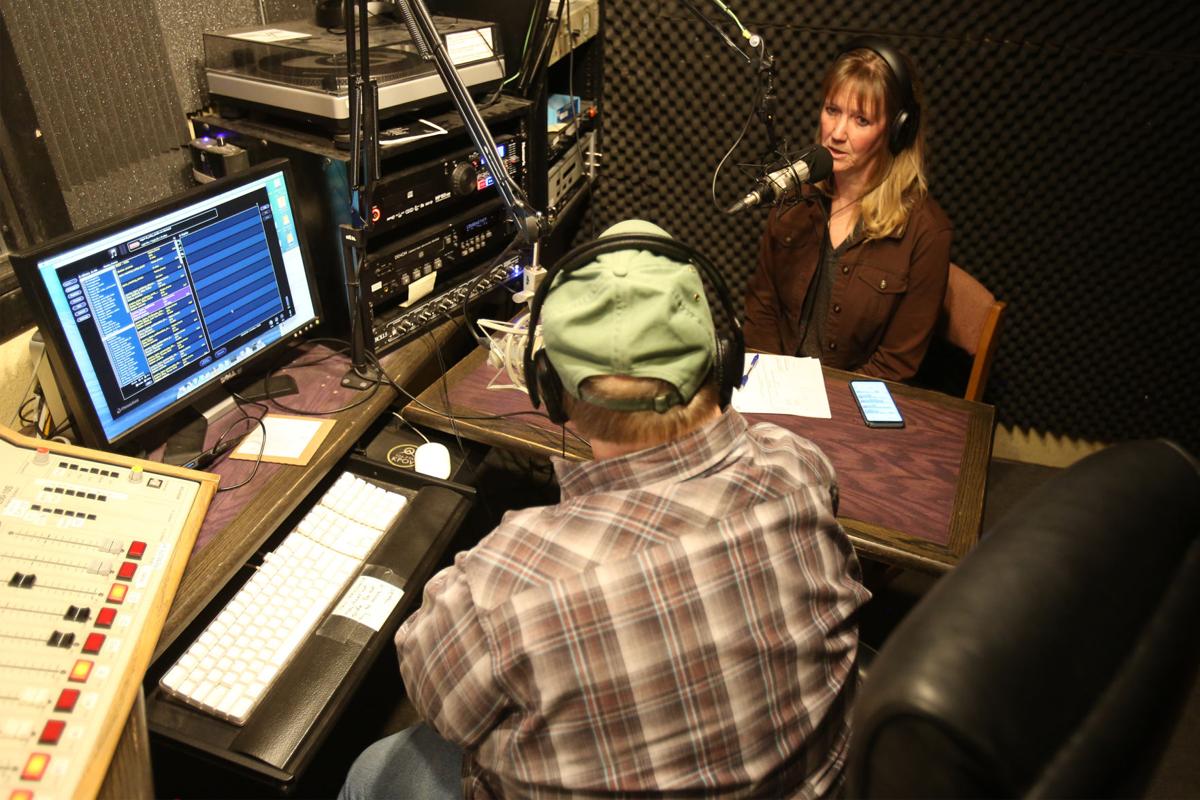 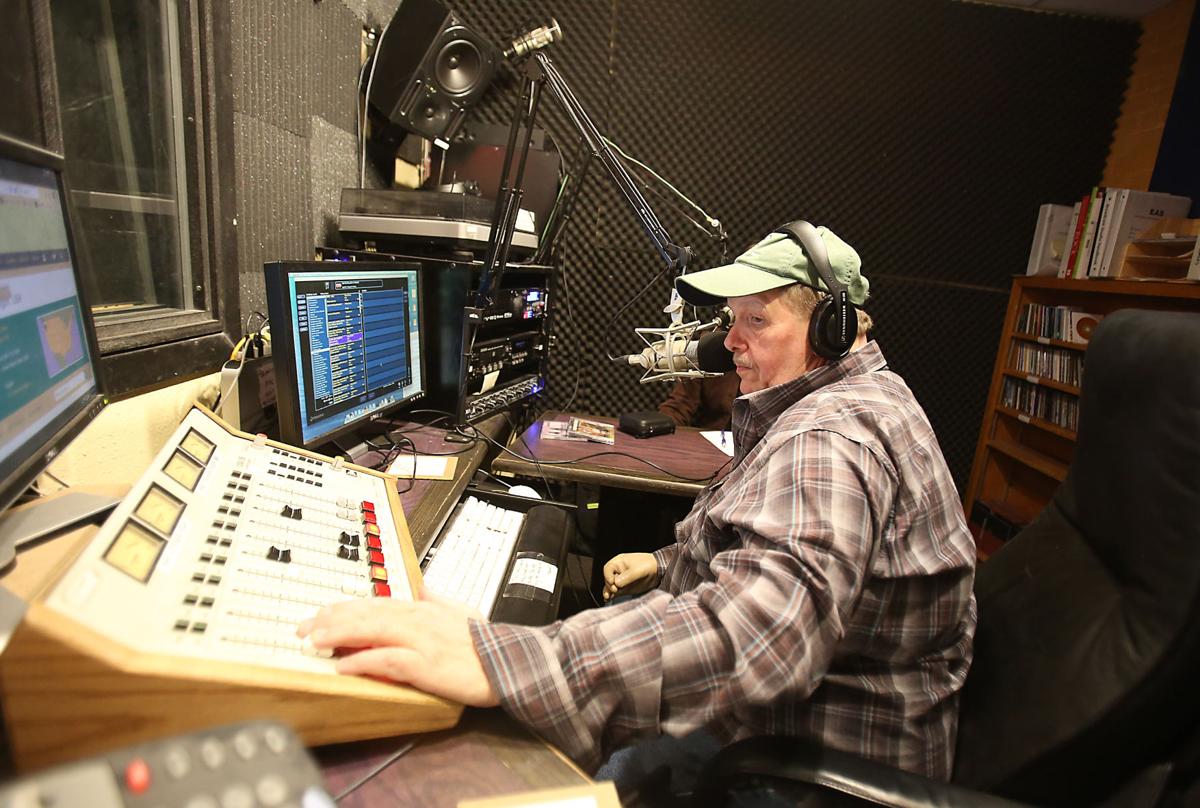 Rick Miller hosts the "Center Stage" program while working the mixing board in the KPOV studios on Saturday, Jan. 26, 2019. (Ryan Brennecke/Bulletin photo) 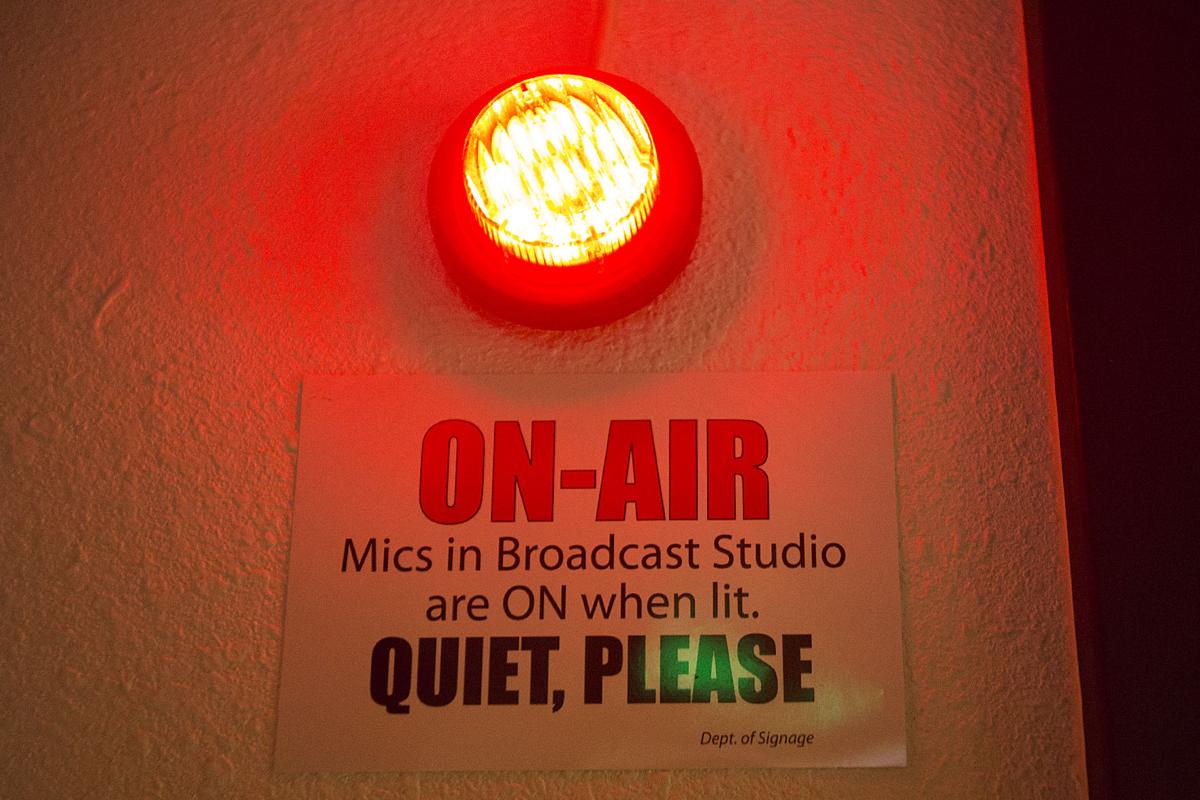 A red light illuminates the hallway during the program at KPOV. 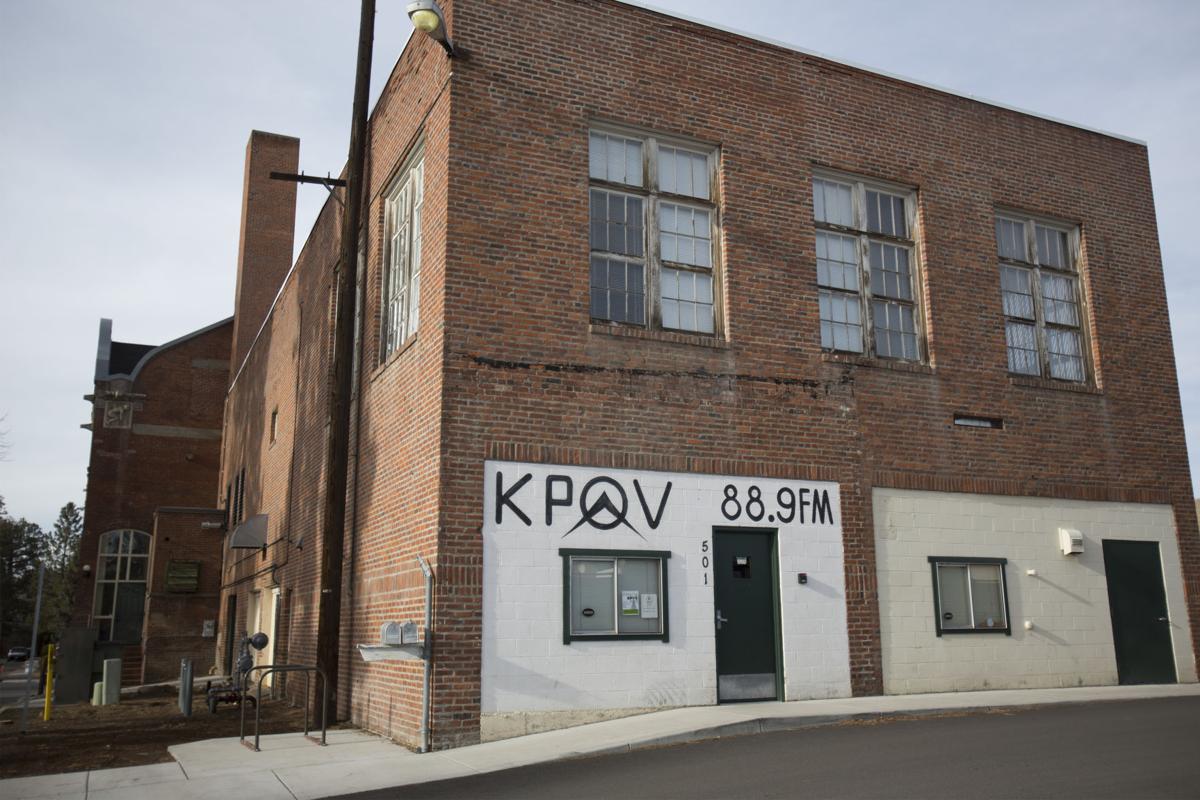 The exterior of the KPOV broadcast studios in downtown Bend on Saturday, Jan. 26, 2019. (Ryan Brennecke/Bulletin photo) 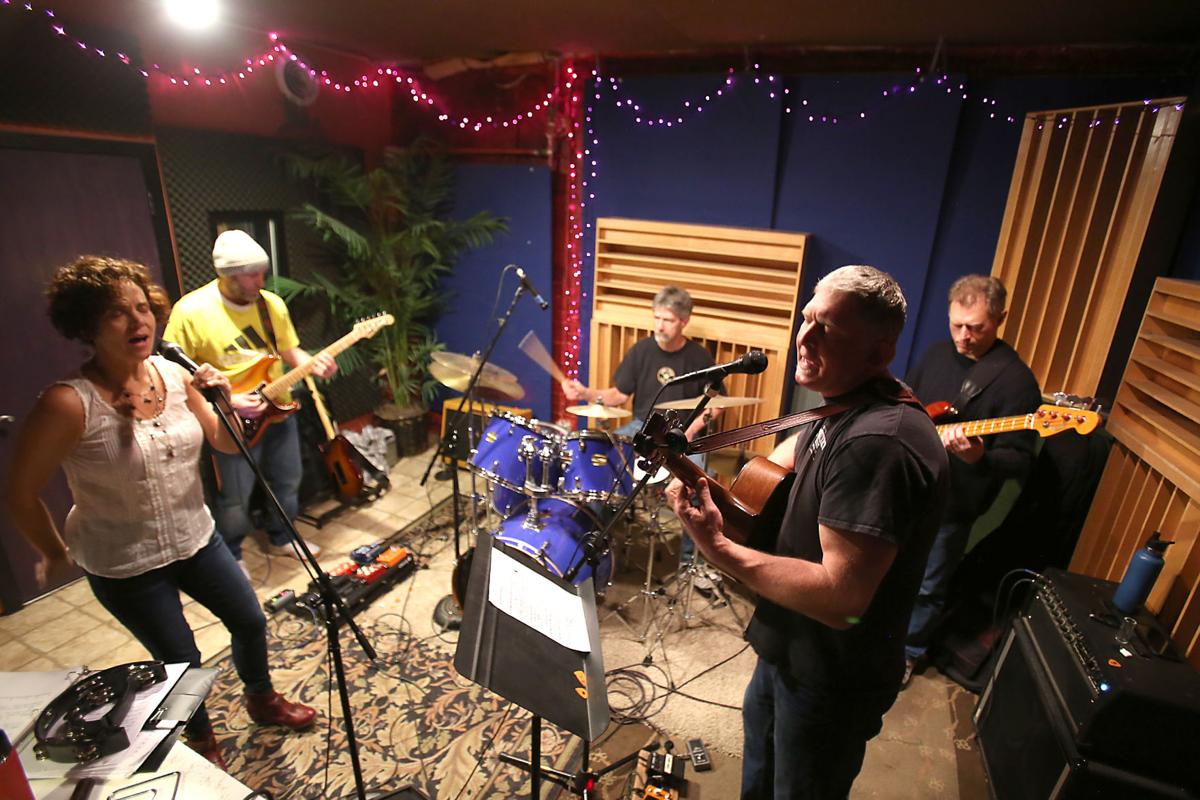 Rick Miller hosts the "Center Stage" program while working the mixing board in the KPOV studios on Saturday, Jan. 26, 2019. (Ryan Brennecke/Bulletin photo)

A red light illuminates the hallway during the program at KPOV.

The exterior of the KPOV broadcast studios in downtown Bend on Saturday, Jan. 26, 2019. (Ryan Brennecke/Bulletin photo)

On a recent Saturday afternoon, Downhill Ryder lead vocalist and keyboardist Linda Beauchamp contemplated playing a show for an audience she couldn’t see.

It was her first time performing live on the radio — “Center Stage,” KPOV 88.9-FM’s long-running show dedicated to local and regional music, to be exact. While Downhill Ryder made its debut on the show about five or six years ago, Beauchamp wasn’t part of the group’s five-member lineup at the time.

“It’s interesting to know that there’s an audience out there, but I can’t see them, and I have no concept of whether there are 100 or 5,000 people listening, or a million people listening,” Beauchamp said. “It’s kind of strange.”

Since launching in July 2005, “Center Stage” has aired more than 300 performances from local and regional musicians and bands, by host Rick Miller’s count. For many, those performances were a big moment. While online streaming means artists of all levels can be heard by millions around the world, “Center Stage” offers a more tangible, traditional experience for local musicians.

“A lot — I would say 80 to 90 percent — (it’s their) first time they’ve ever been on the radio,” Miller said after recording Downhill Ryder’s show. “And so they’re thrilled to pieces about that, and their grandma and grandpa are listening.”

During the show’s interview section, Beauchamp gave a shoutout to family and friends listening online in Arizona and Arkansas.

A lifelong love of music — especially local music — led Miller to volunteer at KPOV. He was born in Bend, where he picked up trumpet at a young age. He moved to Bellevue, Washington, where he attended Interlake High School and joined the Drum Corps. While there, he befriended the local band Rail, which shot to national prominence in 1983 after winning the first edition of MTV’s garage band competition, “The MTV Basement Tapes.”

“I actually lived with the band, I roadied with the band. They ended up touring with Van Halen,” Miller said. “So I got this bug of rock ’n’ roll bands, and then some other friends of mine got into a band and I was doing some stuff with them.”

He eventually started playing keyboards and writing songs. After moving back to Bend in the late ’90s, he recorded a CD of his music with local guitarist Scott Fox and brought it to the Central Oregon Songwriters Association, or COSA.

Miller and Worcester were members of COSA when KPOV Community Radio launched in the summer of 2005. The nascent station advertised an informational meeting in the Deschutes County Library asking for people interested in community radio to train to become DJs, and Miller and Worcester jumped at the chance to get local music on the air.

“We weren’t even thinking — maybe we’ll play some live music, but it’d just be nice to have a place where we can play local music,” Miller said. “And so we went to it, and we were excited about it.”

The first episode of “Center Stage” aired July 2, 2005, three days after KPOV went on the air. It has stayed in its 2-4 p.m. Saturday time slot ever since.

Early on, “Center Stage” ran concurrently with another local-music themed show, “Homegrown Music” on Clear 101.7-FM and hosted by Dori Donoho. But that was a show on commercial radio as opposed to KPOV’s community radio model, which means Miller and his co-hosts and engineers over the years volunteer their time.

“(Donoho) would play some COSA artists, and that was the first time I ever got my stuff on the radio, was on her show,” Miller said.

COSA played a large role in getting “Center Stage” off the ground with its annual Song of the Year contest CDs. Before live performances became a regular feature on the show, Miller relied on these CDs, which featured local, original songs.

“People would bring in their songs and get them recorded, and then we would put them out to judges,” Miller said. “So there was this packet of CDs every year of local music from all different types of songwriters, and they weren’t necessarily in popular bands or whatever. After a while we started to get some band stuff.”

Early live performances featured solo artists or duos, and were produced and recorded in the small studio where Miller and the other DJs run their shows and conduct interviews today. Bend songwriter and guitarist Dean Prescott, who also works at Recycle Music and has released numerous solo albums, recorded the first “Center Stage” live performance shortly after the show launched in 2005. Like many artists since, he played some of his own influential records as part of the show.

“I remember it like it was yesterday. Really, it was great,” Prescott said. “We sat and talked, and I played songs. I brought some records. This was one of my weird little things — I can’t remember exactly what I played or anything, but I brought some Yoko Ono with me and we played a cut or two. And I was trying to prove to people that she wasn’t just a screamer.”

“Primarily, we didn’t do a lot of live stuff in the first year or two; we just weren’t set up for it,” Miller said. “So whenever I could, we’d bring somebody in.”

Part of the problem early on was technology. The studio had a “dinosaur” mixing console that wasn’t equipped to produce and record full bands, Miller said.

“When we’d get a big band, we’d just have to run all the wires and everything because there weren’t enough hookups — there still aren’t enough hookups,” he said. “We actually bought our own board for the show so we could have a decent board.”

By 2008, the larger production studio was ready to go, and by 2010, the show regularly featured full bands, most of them local, performing on-air.

Occasionally, Miller will get a call from the manager of a touring artist playing in town who wants to perform on the show. Although the focus is still local music, Miller will accommodate these requests whenever he can. Along with Kilcher and Jacobs-Strain, new age pianist George Winston, a frequent performer at the Tower Theatre, was a highlight for Miller a few years ago.

“He said something like, ‘I know you don’t have a grand piano here in the studio,’” Miller said. “And I go, ‘No, George, we don’t.’ He goes, ‘But it’s OK. I play harmonica.’ And I go, ‘Really?’ He goes, ‘Yeah, yeah. I have a harmonica CD that probably, maybe a lot of people — I’d like to talk about that.’ And so he did, and we did. So he went out and played harmonica live in the studio, and did a couple harmonica cuts.”

By now, the show has been on the air long enough that local artists will come to Miller asking to be on the show. But Miller, and now Bancroft, will often scout open mic nights and shows looking for new talent.

“I go out and listen a lot just because I’m really passionate about it; it’s a big passion of mine; it’s a big hobby of mine,” Bancroft said. “But I do probably listen with a little bit of a different ear, you know. Who’s coming through? Ooh, that could make sense on ‘Center Stage.’ That sort of stuff. Help get them in and promote the religion … of KPOV. It’s an awesome way to get the community more involved, too.”

And Central Oregon artists appreciate the exposure the show gives them. Bend power trio Bony Chanterelle played the show for the first time last year, shortly after the release of its debut album, “This Can’t End Now.” Frontman Chris Fraser had been on the show before as a solo artist and with his previous band The Chinups, but the experience was a first for drummer Jake Satathite and bassist Devrett Gupta.

“It puts us in this spotlight, like KEXP (90.3 FM in Seattle) has and radio shows from Austin, Texas,” Fraser said. “Not a lot of radio stations can fund a live-band mix and hire or have a volunteer sound guy to come in there and mic everybody. I mean, it takes a lot of work to get that coordinated, and it’s just a great experience for the artist.”

Prescott, who played the show again with his band The Substitutes a few years after his solo shot, said the experience was one of the most relaxed he’s had being on the radio. He also appeared on “Homegrown Music” when that show was on the air.

“It’s huge because it gives people confidence, too, and it gives them a place to say what they’re doing, where they’re gonna play next,” Prescott said. “It was extremely positive. It was not stressful. Rick’s a friend, too, so it helped a lot.”

After 13-plus years hosting “Center Stage,” Miller is still excited to share his love of local music with the community.

“I think it’s really good to have artists — even if we all know and I know they’re never gonna make the big time, but they’re good,” Miller said. “And this may be the only time they ever have their music played (on the radio). … Maybe it will make them better or decide to get in or out of it or whatever, or maybe it will help somebody else. I don’t know why, but I think it’s really important to do that.”