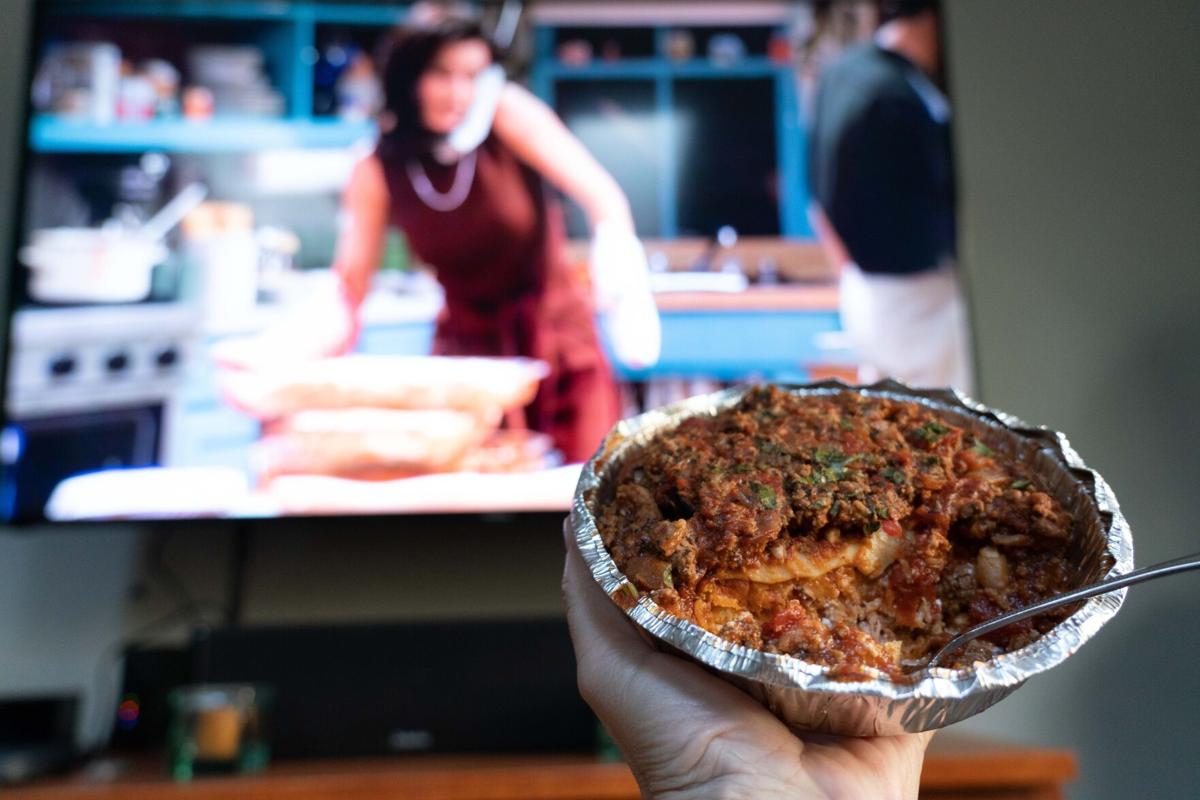 Lasagna from R-Spot in Redmond pairs well with the “Friends” episode “The One with a Dozen Lasagnas.” 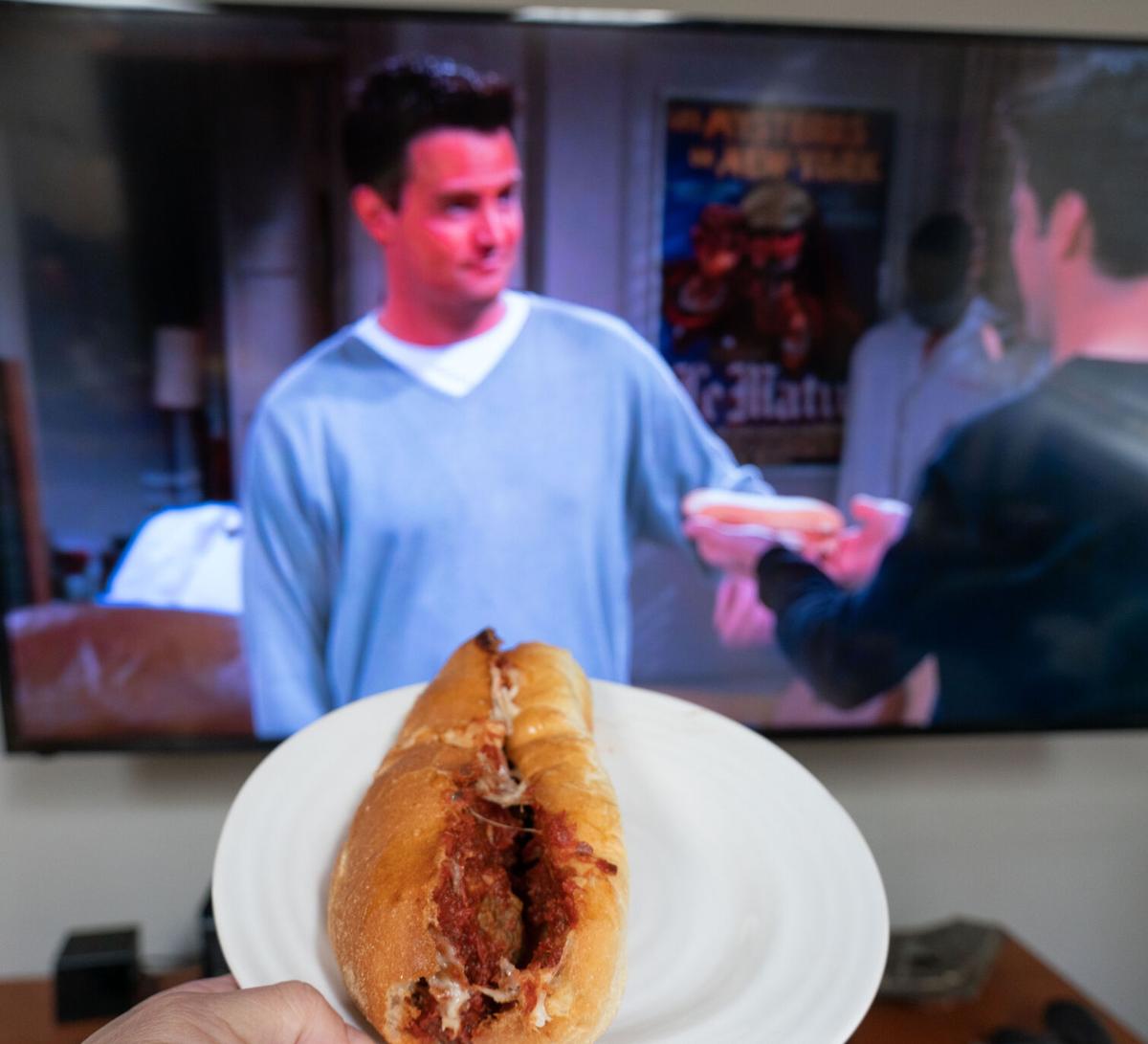 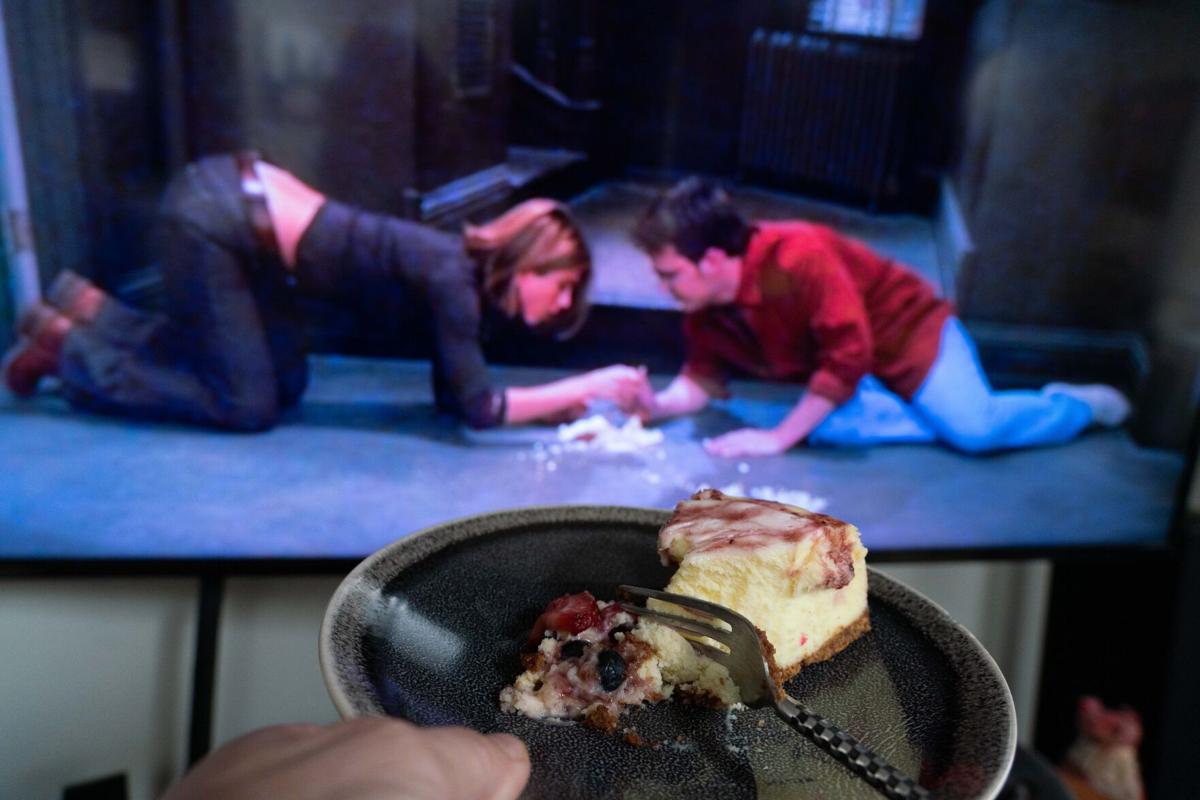 “Friends” episode “The One with All The Cheesecake” is paired with New York Cheesecake from Lemon Tree.

Lasagna from R-Spot in Redmond pairs well with the “Friends” episode “The One with a Dozen Lasagnas.”

“Friends” episode “The One with All The Cheesecake” is paired with New York Cheesecake from Lemon Tree.

It’s hard to believe that it’s been over 20 years since some of my favorite TV shows first debuted. “The West Wing,” “The Fresh Prince of Bel-Air” and “Friends,” will soon stream reunion shows. It’s time to start bingeing to refresh my memory before the casts begin reminiscing. Popcorn and munchies may be a staple when watching TV, but it can also be fun to “eat along with the show.” Watching our favorite episode might make us hungry for what they are eating on screen. Why not choose a snack or meal that brings smell and taste into the experience?

Several episodes have had classic food themes. On “Friends,” Monica was a chef, and the ever-hungry Joey was stingy about sharing food. Food played a part in some “West Wing” episodes. A majority of the scenes in “The Fresh Prince of Bel-Air” took place in the kitchen.

Here are local restaurants where you can grab food to join in on the classic scenes and episodes.

The “West Wing” reunion will premiere Thursday on HBO Max. Writer Aaron Sorkin has been brought in along with the entire cast. They will be recreating one of the classic scripts in an on-stage performance. The trailer for the reunion twice mentions getting pizza. Join in by picking up pizza from one of many restaurants around Central Oregon. Bend Pizza Kitchen serves pies with healthy, locally sourced ingredients. Pacific Pizza has unusual toppings. Raganelli’s Pizza on the East Side adds CBD to some of their pizza dough. Grab a slice at Pizza Mondo or Little Pizza Paradise. Perhaps your choice is one of the Cibelli’s pizza locations. Outside Bend, consider Figaro’s Pizza in La Pine, Martolli’s Pizza in Sisters, or Grace and Hammer in Redmond.

Food played a part in the plot-line of several episodes. In “College Kids,” Leo discusses a potato salad that is so good, he’s convinced that the chef puts in a secret addictive ingredient. A banana muffin plays a big part in “Election Night.” Donna realizes that she voted for the wrong candidate and tries to bribe another voter to cancel out her vote.

In “20 Hours in America Part 1,” the President is touring the country for his reelection campaign. Tobey, Josh and Donna miss the motorcade somewhere in rural Indiana. As mishap after mishap befalls the trio, by afternoon, they stop at a diner. Tobey wants a local delicacy, which after some issue, the owner tells him that it is a dry rub. The owner explains that the meat has been rubbed with spices for a day or two. We never get to see them eat the ribs, but one could imagine the juicy barbecue flavor. Baldy’s Barbecue uses dry rub on their ribs. If you want to experience it for yourself, grab a rack from Baldy’s in Bend or Redmond.

In “Life on Mars,” Tobey eats a salad in an attempt to eat healthier foods. He calls it “a bowl of weeds” and complains, “You could cover this thing in barbecue sauce, and it would still taste like ground.” I would disagree if you got one of the great salads available like those I wrote about recently. You might forget you’re eating healthy if you pick up a Coronation Salad from Lemon Tree, a Kale Salad from Vine n Tap, or the Pear Bleu from the Hideaway.

As we wait for the reunion show to finally air, we can catch up on 10 seasons of Friends, many of which have classic food moments.

“The One with a Dozen Lasagnas” opens with Monica on the phone with a catering client. A stack of pans of lasagna is on the table next to her as she insists that the client did not tell her that he only wanted vegetarian lasagna. Stuck with so much lasagna, she sends off a pan of lasagna with each friend and even a foe. Throughout the episode, the cast is eating lasagna, which adds to the comedy of each scene. I picked up lasagna at R Spot in Sisters to accompany the episode. Marcello’s in Sunriver also makes an excellent lasagna. I could have picked up the Italian dish from Pastini in Bend, or Geno’s Italian Grill in Redmond.

Another classic food episode is “The One with the Ride Along.” When Ross, Chandler and Joey join Phoebe’s boyfriend, Gary, the Policeman, Joey brings his favorite meatball sandwich during a ride-along. Gary asks Joey, “Does it have meatballs? Cheese? Marinara sauce.” Joey replies it does as his mouth is watering for a bite. “Yeah,” says Gary, “You can’t eat that in my car.” Later, when a car backfiring scares the three friends into thinking that there is gunfire, Joey dives over Ross. Everyone thinks Joey was a hero, as he protected Ross with his body. We later find out that Joey was trying to protect the sandwich. I decided on a meatball sandwich from R Spot. Following a friend’s recommendation, I also tried the meatball parm sandwich at Plankers. Juicy meatballs are smothered in a slightly spicy marinara and a generous serving of stringy mozzarella. I think Joey would have protected these sandwiches too.

I can relate to “The One with All the Cheesecakes.” Chandler finds a cheesecake that was mistakenly delivered to his apartment. It is the best cheesecake he has ever eaten, and once Rachel tastes it, she is hooked on it, too. They steal a second cheesecake, describing its deliciousness as creamy with a buttery, crumbly graham cracker crust. In their greed, the cheesecake falls to the floor in the hallway. It’s too good to leave it there. They grab forks and eat it from its fallen piles. The New York Cheesecake from Lemon Tree might have been the dessert they described. Creamy, buttery, crumbly with the bonus of fresh seasonal fruit. Luckily, I could eat it from the to-go box and not from the floor.

‘The Fresh Prince of Bel-Air’

It’s been 30 years since the pilot first aired. “The Fresh Prince of Bel-Air,” fan websites state that 75% of the show’s scenes take place in the kitchen. That is why the “Burning Down the House episode in season 6 was such a classic. Will attempts to make Bananas Flambe. Adding too much alcohol, he lights the dessert on fire, and flames shoot up into the air. While he almost gets it under control, he ends up burning down the whole kitchen. You can enjoy the Banana dessert from on the Eastside. Their Bananas Flameadas can be prepared to go (sans fire). Sliced bananas are pan-fried with butter, brown sugar, and cinnamon then fired with rum. You can call the restaurant to pick up an order of the dessert. The ice cream will be packed separately from the warm bananas. I highly recommend that you do NOT try to flambé them at home.