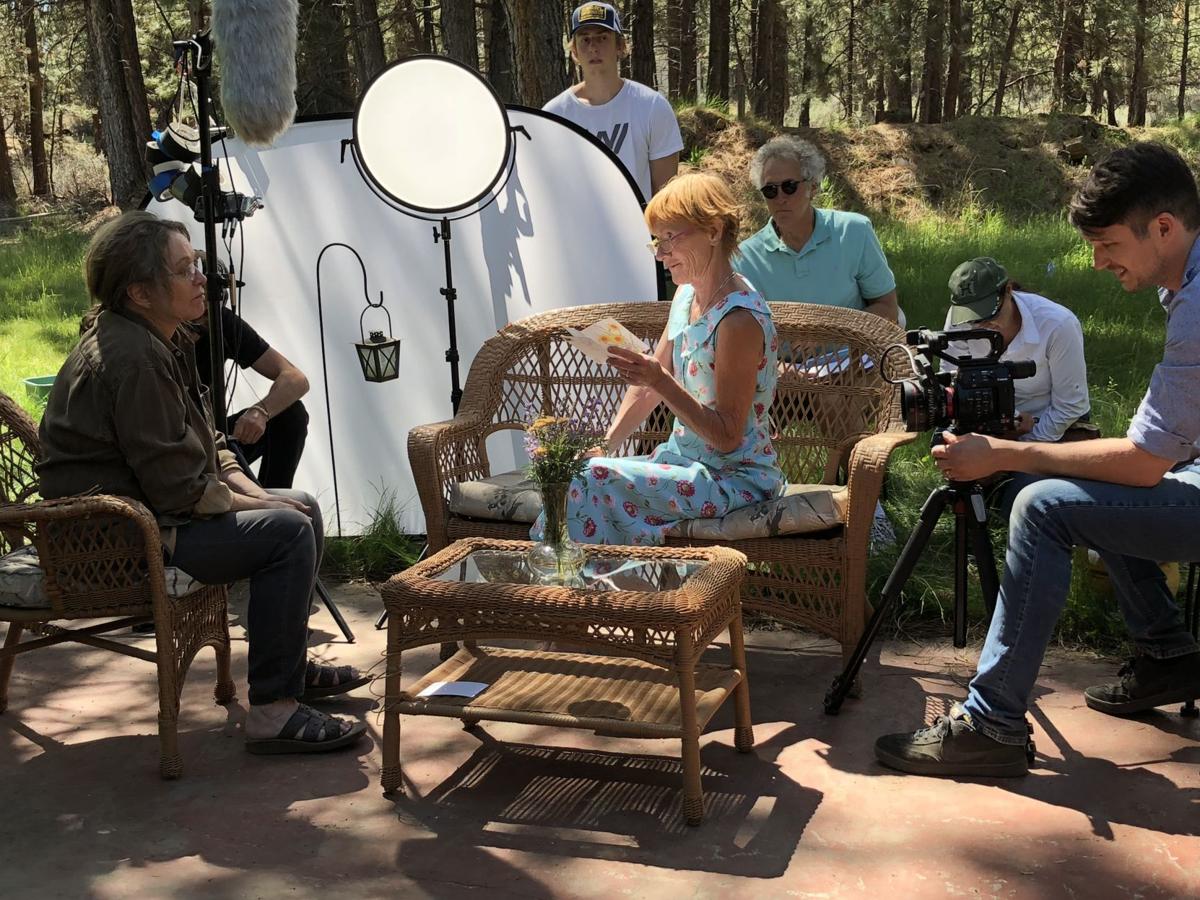 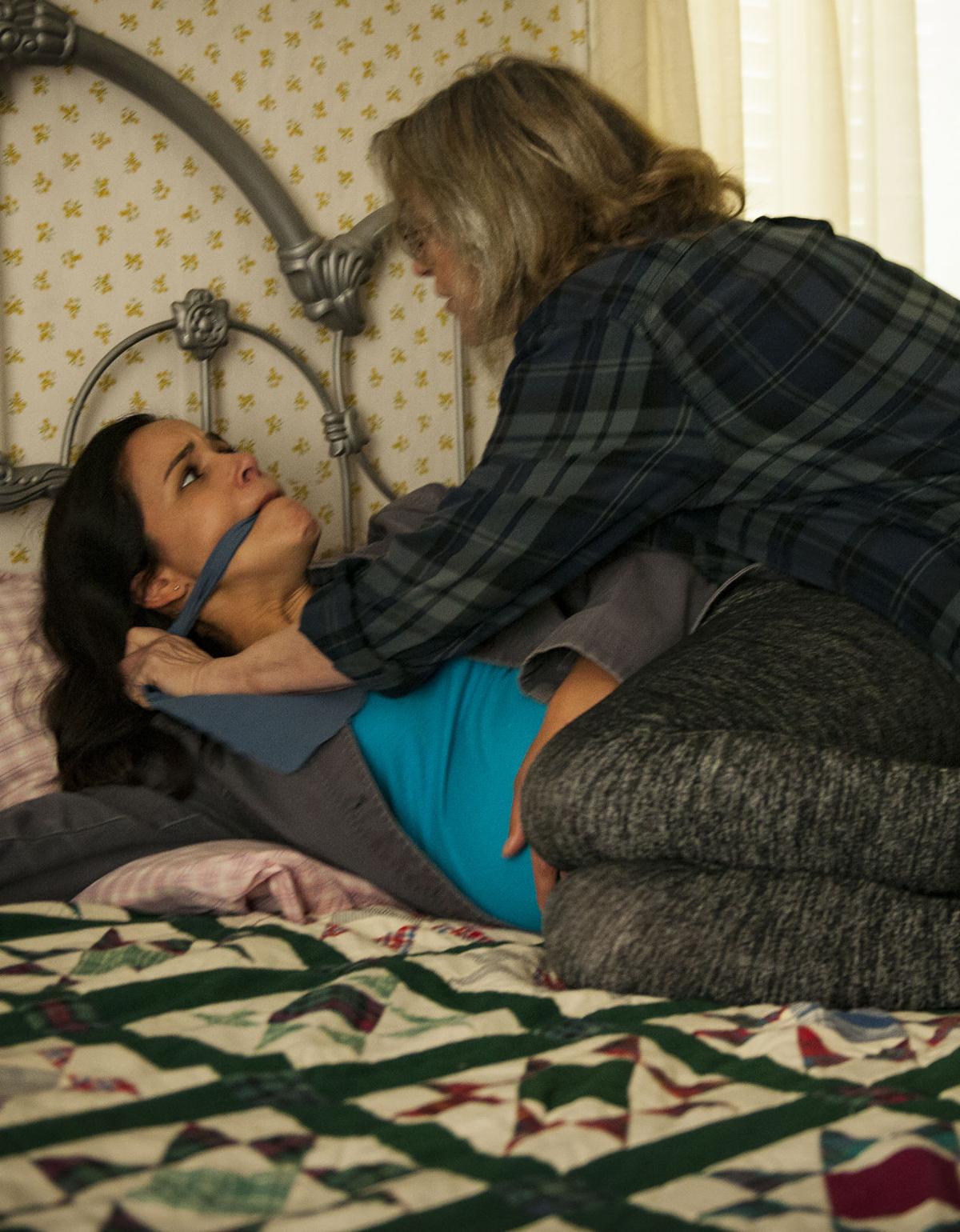 Bonnie Bedelia secures captive Melissa Fumero in a tense moment from “A Stone in the Water,” written and directed by Dan Cohen, of Bend. Outside of Fumero and Bedelia, the thriller features a largely local cast, and makes its Central Oregon debut Saturday in Bend. 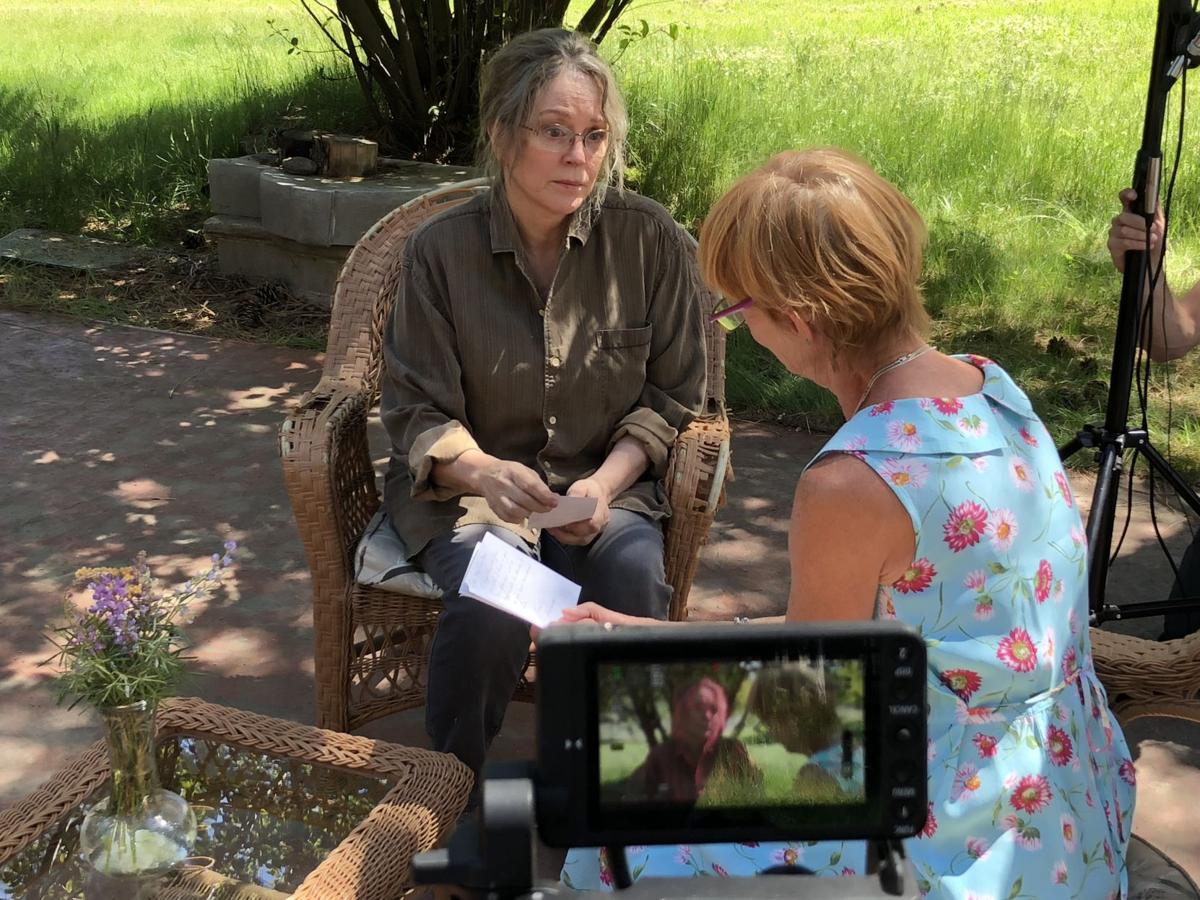 Bonnie Bedelia and Mary Kilpatrick prepare to shoot a scene from “A Stone in the Water” on location in Bend. 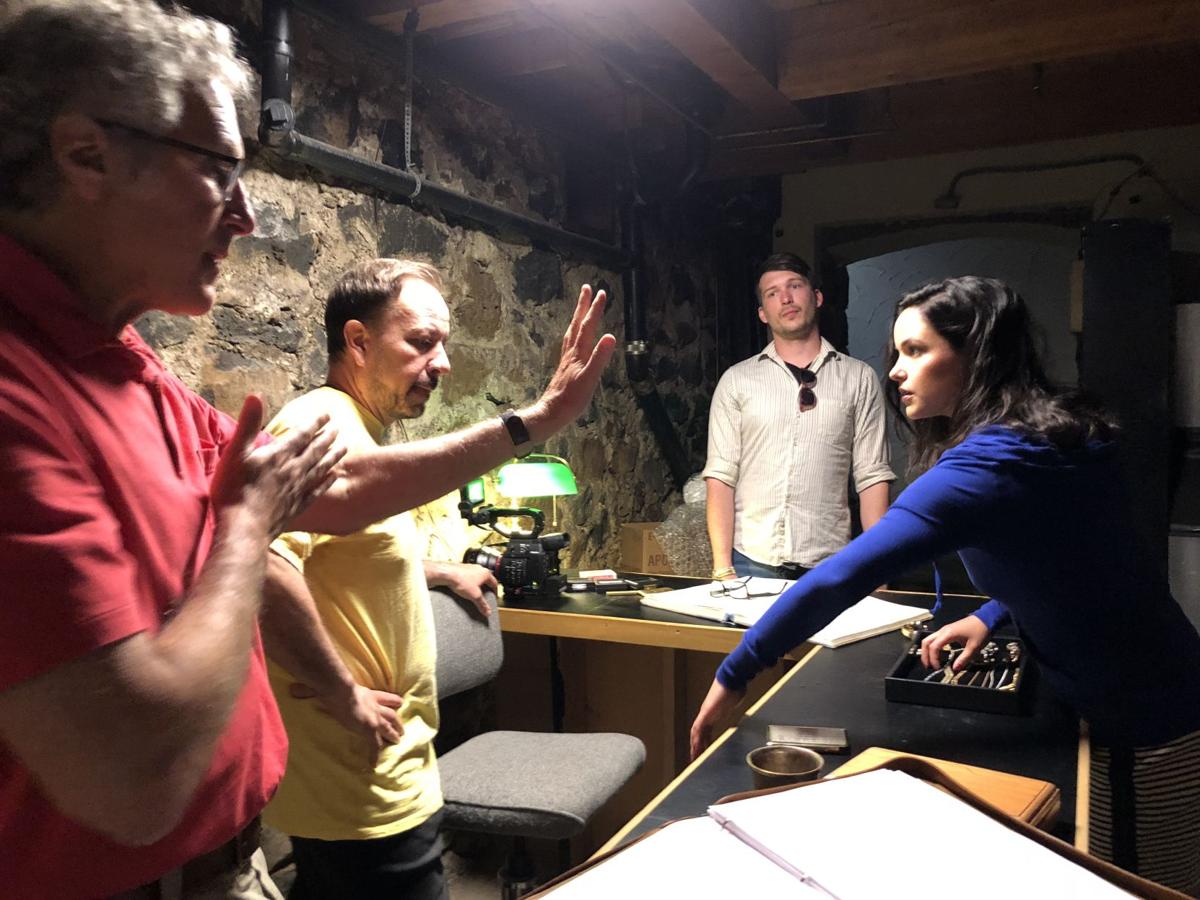 Nine-Nine” actress Melissa Fumero prepare to shoot a tense scene on location in downtown Bend in 2018. 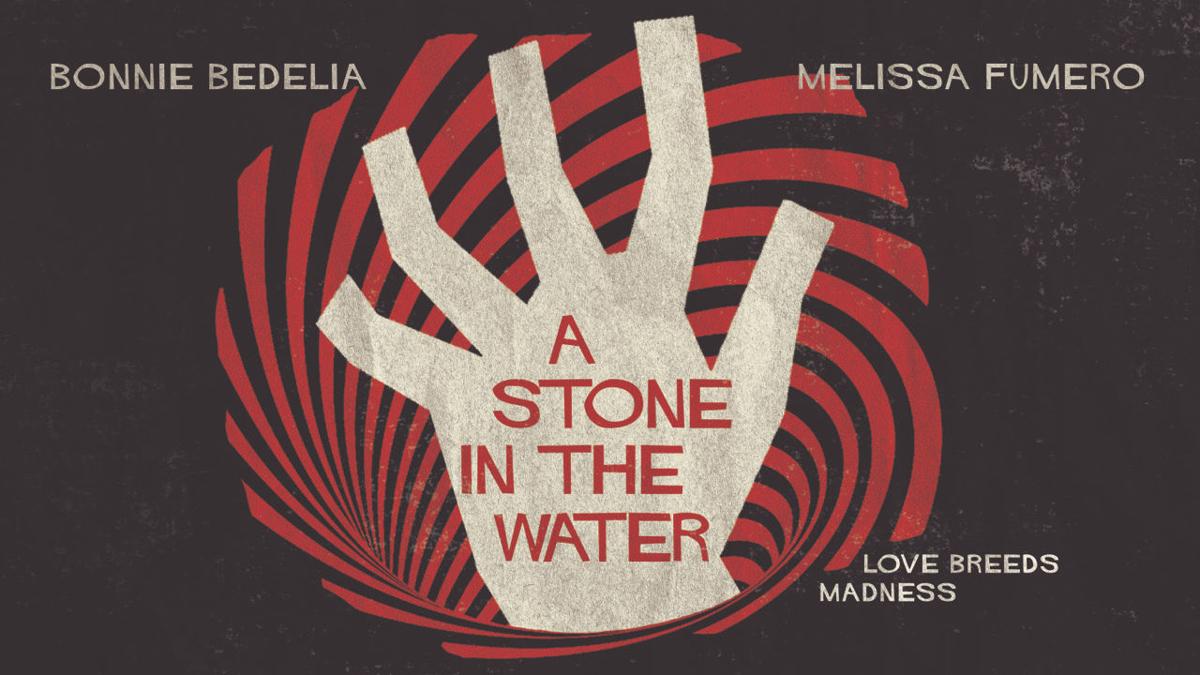 Even the logo for “A Stone in the Water” has a local connection. It was designed by actress and graphic artist Kara Klontz.

Even the logo for “A Stone in the Water” has a local connection. It was designed by actress and graphic artist Kara Klontz.

Bend filmmaker Dan Cohen has much to be proud of in his new film, the dark thriller “A Stone in the Water.”

Cohen wrote and directed the 93-minute film, which will make its Bend debut with two screenings Saturday at Eagle Mountain Event Center.

The rest of the cast and crew, however, are all Central Oregonians. Last month, the film earned the prize for Best Thriller at the 2019 Fort Lauderdale International Film Festival, which featured over 180 films from more than 40 countries screened over 17 days.

“It’s not Sundance, but it’s a major regional event,” Cohen said. “I’ve had another film there, so they know my work a little bit, but the last day of the film festival, when they had their awards assembly, I got a call from the director, and he said, ‘Hey, I hope you’re coming to the awards assembly.’ And sure enough, we picked up … a juried prize.”

Despite those accomplishments, it’s the film’s mostly local cast and crew that Cohen and Schor couldn’t stop gushing about as they prepare to screen it in Bend this weekend.

A majority of the cast is made up of local actors readers might recognize from area community theater and TV commercials.

Ryan Klontz, whose local stage résumé includes “Rock of Ages” and “She Loves Me,” stars as a man left with brain-damage after nearly drowning as a boy. As well as appearing in the film, Klontz’s wife, Bend actress Kara Klontz, who designs book covers for a living, created the film’s logo.

Kimberly Leemans is also in the film, which was shot over a few weeks in May and June 2018. Leemans gave a strong performance earlier this season in the lead role of Cascades Theatrical Company’s “These Shining Lives,” and has formerly appeared on “The Walking Dead” and “CSI: Miami.”

Bedelia and Fumero earned raves in Fort Lauderdale, Florida, but Cohen and Schor also heard a lot of positive feedback about Bend actors in the film.

“They said, ‘Where did you get that supporting cast?’” Schor said.

“They held their own against the pros. And Ryan has a very hard part,” Cohen said, referring to Klontz’s brain-damaged character.

“That’s not easy. Playing mentally handicapped is very, very hard. He didn’t do it with any affectations,” Cohen said. “My friends in the business who were there came to see it, and said, ‘Who were the local actors? Who were the semi-pros?’”

Schor produced the film along with Cohen’s wife, Kathryn F. Galán, who over her career has produced more than two dozen films with Disney, Cohen said.

“I learned the movie business doing this,” Schor said.

“Kathryn’s expertise on things like how do you handle SAG (Screen Actors Guild) and budget, and just the knowledge that she brought on the administrative end … was just invaluable.”

Shooting took place over three weeks in May and June 2018, after Cohen had scouted appropriate places to shoot. Among other needs, his script called for a basement, as well as a pond.

“When you’re doing low-budget movies, if you don’t have this stuff, you don’t have a movie,” Cohen said. He likens making an independent movie to putting together a puzzle.

“We needed a house, a big house, that had gone to seed, and looked at least 40 or 50 years old. Try and find that around here, because either it’s been torn up or they’ve been renovating it,” Cohen said. “This is your filmmaker nightmare. You’ve got all the pieces, but you don’t have a location.”

A Realtor in Prineville offered up her house, “but it was too nice. We’d have to trash the place to make it look right,” Cohen said.

Eventually she suggested an old house just outside of Prineville that fit the bill.

“We dressed it a little, but Gary Loddo, he did the set design, and he went in and just brought in a few things,” Cohen said.

“We didn’t use a single person out of town to make this movie except in the final processing of the sound,” Cohen said. And even then, the sound editing company was a Portland-based independent. “But everybody, from DP (director of photography) to hair and makeup, there are 50 local people. On top of that, every cent we raised went back into the community.”

While they didn’t want to get into specific dollar amounts, most of the money to make the film was secured locally, Schor and Cohen said.

Cohen explained that the movie concerns a woman who’s suffered a terrible loss and commits murder.

“That murder comes back to haunt her and other people 35 years later,” he said.

“It’s about two women who couldn’t be more different. One has lived on a farm her whole life in, like, rural Oregon,” Schor said. “(Fumero) is a younger woman who’s almost kind of a drifter. She works in a bar, she dates this crook. … They come together at the farm by happenstance.” The film’s tag: “Love breeds madness.”

Cohen, who’s also a published author, first attended the Fort Lauderdale International Film Festival in the early 1990s with his first film, “The Whole Truth,” a madcap comedy he made as a 30-something amateur looking to gain experience.

Cohen took a summer to make “The Whole Truth.”

“Even though, honestly, I don’t think the movie’s all that good, it did open in New York. It got a good review in The New York Times,” Cohen said. “Again, it was a tiny movie with nobody in it, and it was very hard to sell.”

Yet it did sell to an overseas distributor, Cohen said. “That went way further than anyone ever imagined. We figured we’d make it, we’d show it to ourselves, and we’d pack it up, but I actually got a video deal.”

This year, he did not expect to win in Fort Lauderdale.

“Not even a tenth of that,” Cohen continued, chuckling.

They’d done a couple of test screenings prior to heading to Florida, “but they’re kind of contrived,” Cohen said. “You invite who you can get, and maybe you know a couple of the people. But when you show it in front of 100 people at a festival screening, you really know. … They’re either restless or chatting or playing with their phones, or they’re into it. Really, the last half-hour of this movie, the s--t hits the fan, and you know right away (with) the audience, the movie’s working.”

Now they’re working to get “A Stone in the Water” into more festivals and secure distribution. Referring to Bedelia and the Fumeros, Cohen stressed that it was critical to have some recognizable names among the cast in order for an independent film to stand a chance of being picked up by a distributor.

Now, “we are on the cusp of the best of both worlds,” Cohen said. “We have a sort of commercial film, because it’s a thriller, but we’re now getting the respect of the festivals. Now it’s both. It’s both something that major festivals have picked up, and it’s commercial.”

What: "A Stone in the Water" screenings