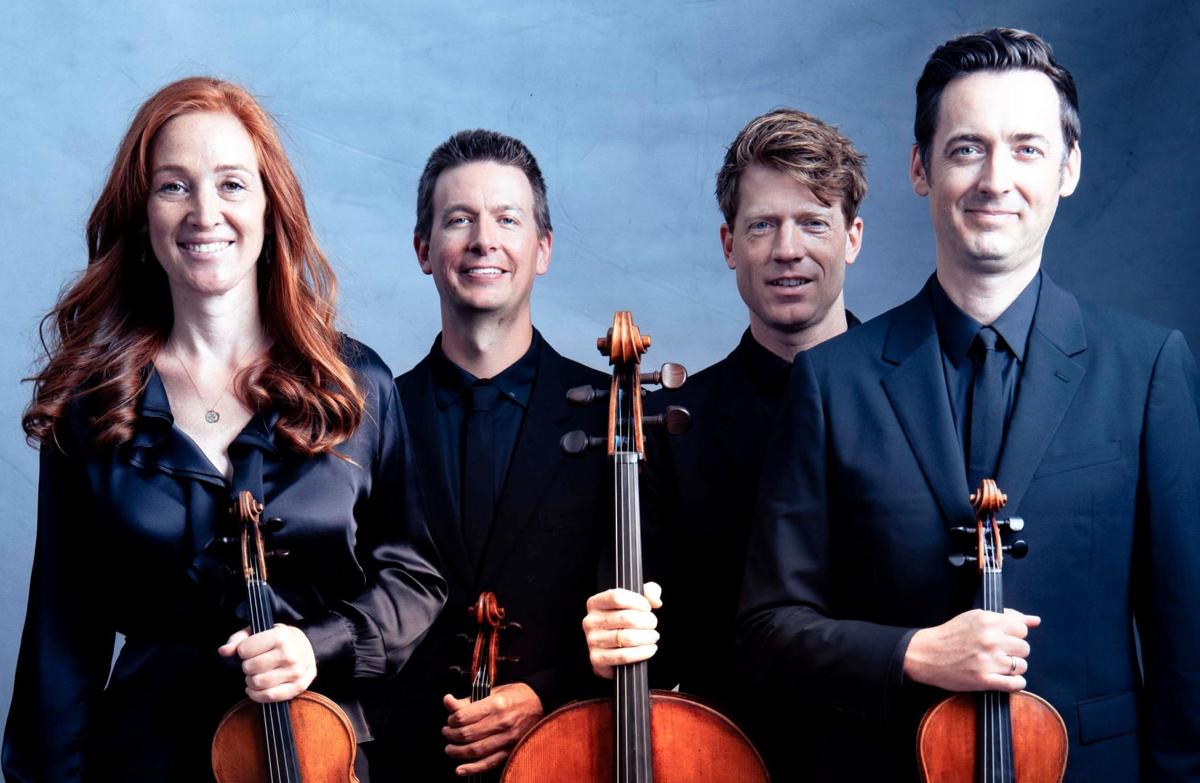 Calder Quartet performs Feb. 14 at the Tower Theatre in Bend. 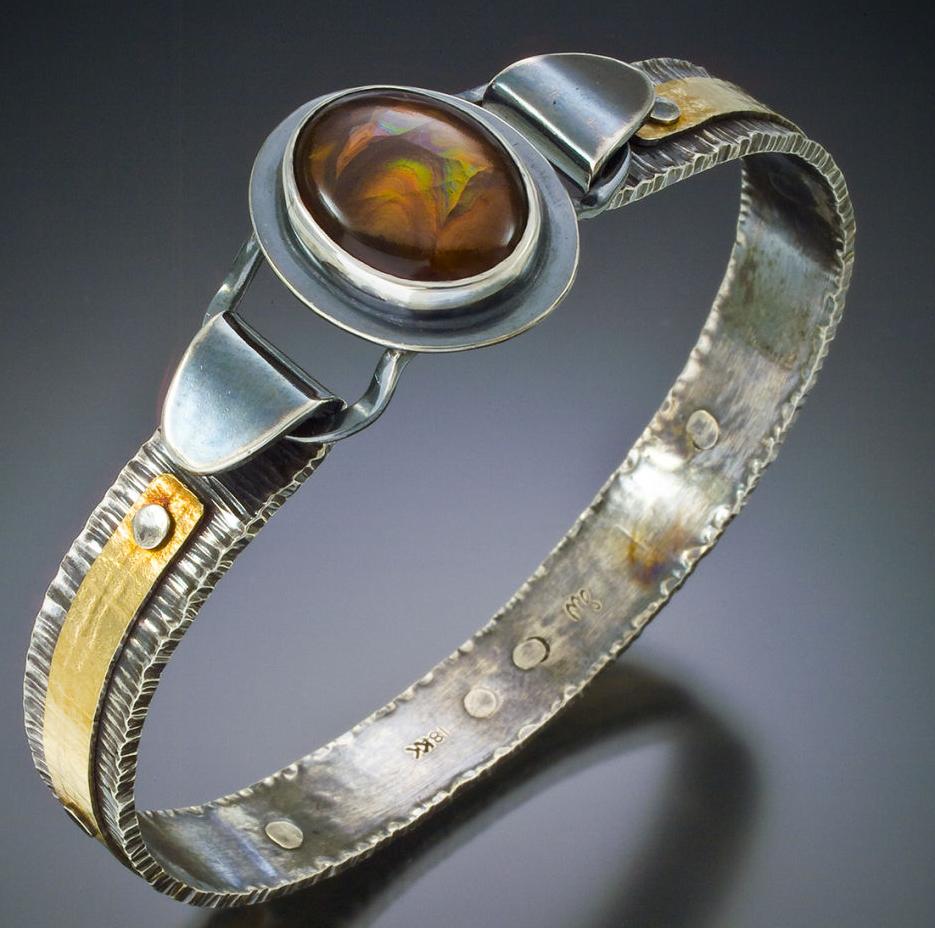 This sterling silver cuff with fire agate, by Mary Jo Weiss, shows as part of the COCC Faculty Exhibit.

Calder Quartet performs Feb. 14 at the Tower Theatre in Bend.

This sterling silver cuff with fire agate, by Mary Jo Weiss, shows as part of the COCC Faculty Exhibit.

Each year, it seems there can’t possibly be any more going on in the arts, and then the next year comes around, proving otherwise. Here are some highlights of things to look forward to from local arts groups in the months ahead.

Choral and classical“In April, we’re going to perform Brahms’ ‘Requiem,’” said Christian Clark, director of Central Oregon Mastersingers. “This is a big work that I’m excited to explore. I’ve never directed the piece. I’ve only sung it. … We’re going to do a version Brahms wrote a little bit later for four-hand piano. It’s going to be a really interesting experience exploring this music that’s known to be a big work, but we’re going to explore the more intimate version.”

The Mastersingers will be on hand at the Tower Theatre in Bend during producer Damian Sneed’s March 12 presentation of “We Shall Overcome,” which combines the words of Martin Luther King, Jr. with music traditions such as jazz and gospel. In August, the group will perform with the Sunriver Music Festival Orchestra, returning for its 43rd season, which will also mark outgoing conductor George Hanson’s last year with the orchestra. If you’re a visual artist, SRMF seeks original artwork for consideration for this year’s poster. For details, contact information@sunrivermusic.org or visit sunrivermusic.org.

Central Oregon Community College’s Cascade Chorale, led by James Knox, will hold its next concert, March 14 and 15 at Nativity Lutheran Church in Bend, and will feature the works of female composers interspersed with readings by women. May 16 and 17, the Chorale will tackle Modern Broadway songs.

According to Michael Gesme of Cascade Winds Symphonic Band and the Central Oregon Symphony, both groups will continue their missions “of making wonderful wind ensemble and symphonic music accessible to all who have ears to hear,” as Gesme colorfully put it. “Our outreach includes programs for youth in the schools, meet and greet opportunities for aspiring musicians, music in public places, children’s concerts. Of special note (Feb. 20), the COS Virginia Riggs Children’s Concert will feature a potpourri of shorter orchestral works that prominently feature the brass section and the winners of the annual Young Artist Competition will appear with the orchestra on their regular season concerts.” In the days after the Children’s Concert, COS will present its Winter Concert (Feb. 22-24), followed by the season-concluding Spring Concert (May 16-18). The Cascade Winds winter and spring concerts will contain familiar tunes (Bernstein’s “Overture to Candide” and John Williams’ “Cowboys Overture”) and new works including Cesarini’s dramatic, sweeping Symphony No. 1, “The Archangels.”

High Desert Chamber Music continues its 2019-20 season with a Valentine’s Day performance by the Calder Quartet at the Tower Theatre in Bend. At 5 p.m. on Feb. 13, the four will lead a master class — of the kind they’ve previously led at places including The Juilliard School — at the Unitarian Universalist Fellowship of Central Oregon and the public is invited to observe. Crown City String Quartet, regarded as HDCM’s resident foursome, returns March 28, performing at Wille Hall in COCC’s Coats Campus Center. Pianist Robert Thies will conclude the 12th season when he returns to perform May 9, also at Wille Hall. A bonus on the season: HDCM’s founder and director, Isabelle Senger, will perform on violin when she and the Bend Children’s Choir take part in the Rodney Marsalis Philadelphia Big Brass concert April 24 at the Tower Theatre.

OperaBend will perform Gaetano Donizetti’s comedic opera “The Elixir of Love” March 13 and 14 at COCC’s Pinckney Center for the Arts, which then heads north for a March 15 performance at Madras Performing Arts Center. The show will be sung in Italian, with English supertitles and a full orchestra conducted by Michael Gesme. Details are still forthcoming, but OperaBend also plans to introduce a Young Vocal Artist Scholarship competition this year, according to OperaBend co-founder and artistic director Nancy Engebretson.

TheaterThe musical “Nine,” about a famed Italian filmmaker fighting battles personal and professional, is on stage through Jan. 18 at Cascades Theatrical Company’s Cascades Theatre in Bend. The show is being produced by Mejaski Choreography and Productions, one of a few productions being presented by outside theater groups this season at Cascades Theatre. Another group making use of the space is BEAT Children’s Theatre, presenting “The Neverending Story” Jan. 24-Feb. 2, followed by “And a Child Shall Lead,” running March 5-8.

Primarily, of course, this is the home of CTC, and much of its 2019-20 Mainstage season lies ahead: Agatha Christie’s “Spider’s Web” runs Feb. 14-March 1, followed by Ken Ludwig’s “Shakespeare in Hollywood” March 20-April 5. The always popular Cascades 10 Play Festival returns April 23-26. CTC’s All Aspects Teen Theatre presents “The Trial of the Big Bad Wolf” May 1-3. Finally, the season concludes with “Bright Star: A New American Musical,” by Steve Martin and Edie Brickell, running May 15-June 7.

Thoroughly Modern Productions will present “Matilda the Musical” Jan. 24-Feb. 1, with the two young actresses, ages 9 and 12, taking turns at the demanding title role on alternate nights. That’s followed by “Into the Woods Jr.,” a TMP teen program, in May. In early July, TMP will produce a new play about John and Abigail Adams and Thomas Jefferson. In August, TMP presents “Beauty and the Beast Jr.” featuring an all-youth cast. Just as last year, TMP will produce a major musical in September at the Tower. Last year it was “Mamma Mia!” and in 2020 it will be “Titanic the Musical.”

Two Twisted Sisters Productions, the company behind the recent original thriller “A Stone in the Water,” will present the Broadway musical “Gypsy” March 12-28 at Eagle Mountain Event Center in Bend. Visit twotwistedsistersproductions.com for more.

May 1-17, Topsoil Theatrics will present the comedy musical “Little Shop of Horrors” at the new, multi-use Open Space facility at 220 NE Lafayette Ave., the former home of 2nd Street Theater. Auditions are Feb. 3. Sign up at somewheregreen.com.

Fresh off “The Nutcracker” in December, Sunriver Stars Community Theater returns with the comedy “Let Him Sleep ‘til It’s Time for His Funeral” Feb. 28-March 7 at The Door in Sunriver. Sandy Klein, who resurrected “Evil Dead the Musical” in the fall, comes aboard to direct “Greater Tuna” May 15-23 at The Door. Sunriver Stars will offer a complementary drama camp running April-June for kids in south Deschutes County for the third time.

Limelight Entertainment’s popular Cocktail Cabaret series, which features local musical theater performers tackling genres including jazz, Broadway and more, launches for the year at 7 p.m. March 10 at Seven Restaurant and Nightclub. Titled “And the Award goes to,” the evening will feature songs nominated for the Oscar for Best Original Song.

Theater in the Park returns to Drake Park Aug. 21 and 22 with the musical “Into the Woods,” directed by Michelle Mejaski. Tickets at bendticket.com.

Visual artsWith the plethora of galleries in Bend and surrounding towns, it’s almost impossible to include every one in this context. Here are but a few highlights:

The Pence Pinckney Gallery at COCC will show works in a variety of genres from COCC art faculty members Thursday, when it opens with a reception from 4:30 to 6:30 p.m., through Feb. 5. It’s part two of a two-part exhibit, with works by art instructors Bill Cravis, Carolyn Platt, Shin Yeon Jeon, Mary Jo Weiss, Terry Gloeckler, Ian Factor and Moe Carolin.

Red Chair Gallery, a downtown Bend group gallery run by its members, went through some major reorganization over the past year — and according to managing cofounder Rita Dunlavy, it’s going well. “We have accomplished everything we set out to change, reorganize and restructure,” Dunlavy said in an email. Of the gallery’s 30 artists, 20 have been with it since its start, and Dunlavy expects to hold a 10th anniversary party in August. “We have longevity in this gallery, and I think it has everything to do with a community of friends that the community of artists has become.”

In February, Tumalo Art Co., an artist-run gallery in Bend’s Old Mill District, will host a group show speaking to the theme of “JOY.” Along with the show, there will be an interactive area outside the gallery where folks can write and attach notes about what brings them joy. Marty Stewart will be the featured artist in March, with the gallery’s Best Fine Art Sale Ever returning mid-month for its ninth installment. In April, Susan Luckey Higdon and Tracy Leagjeld will be the featured artists. Summer will see the return of Artists in Action, with gallery artists working inside and outside, doing demonstrations and painting plein air, on Thursday mornings.

Art in the High Desert, the juried art show on the left bank of the Deschutes River, returns to the Old Mill District Aug. 28-30 with 120 artists from all over North America.

The Tower Theatre celebrates its 80th birthday this year, and the Tower board and staff will celebrate by showing a 1940s classic each Wednesday night in March on the big screen. Each feature film will be accompanied by newsreels, cartoons and features from the era. Admission is only $1, with free birthday cake served. The schedule is “Casablanca” on March 4, “The Philadelphia Story” March 11, “The Maltese Falcon” March 18, “Gone With The Wind” March 25. More at towertheatre.org.

ComedyBend Comedy Festival, a new event, comes to life May 14-16 in downtown Bend. If you or someone you know is a stand-up comic, the application submission process opens Friday . Visit bendcomedy.com for more information.