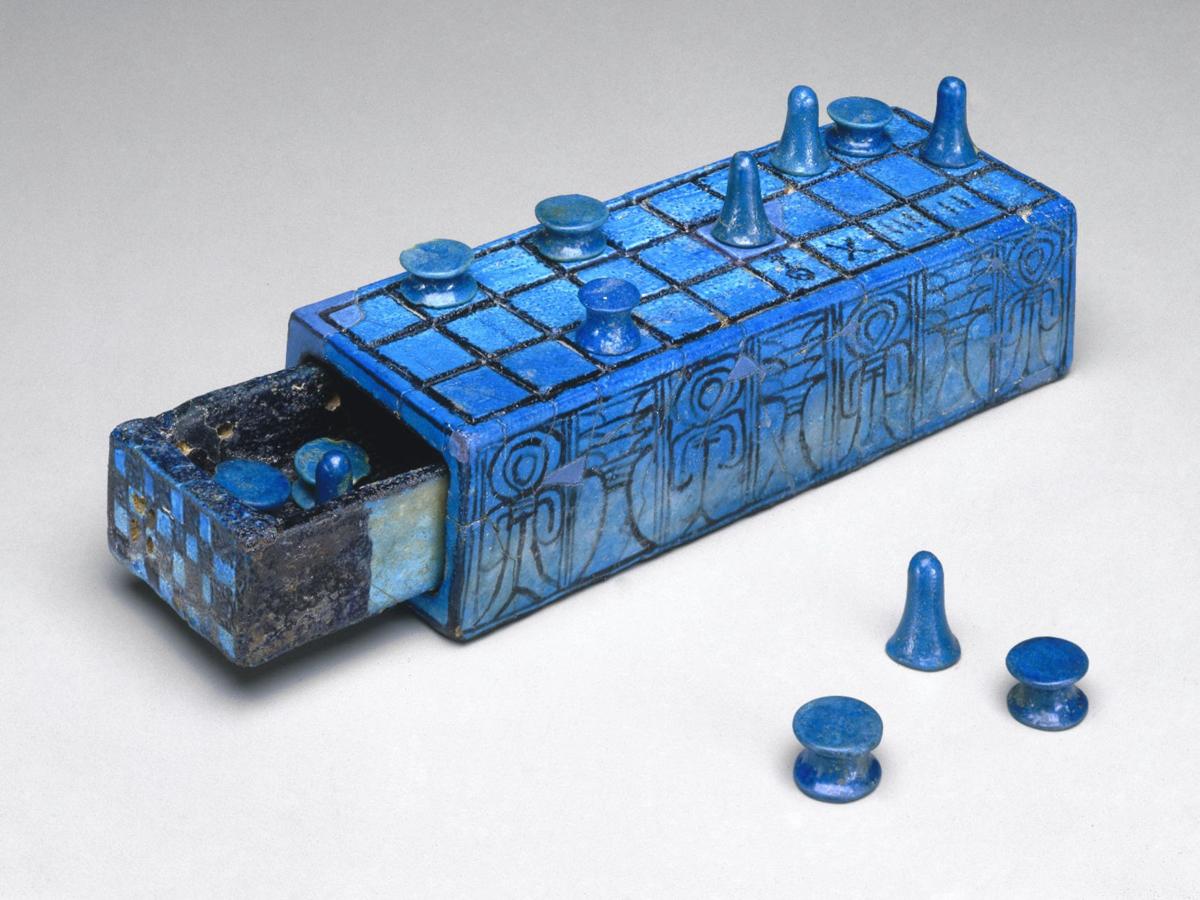 A Senet board inscribed for Amenhotep III from Thebes on display at the Brooklyn Museum. 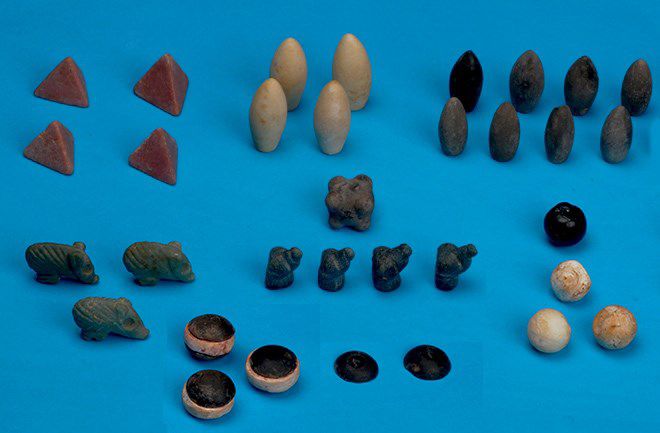 These Mesopotamian game pieces were uncovered in 2013 at the Basur Hoyuk. Dating back about 5,000 years, they are the oldest surviving game evidence. 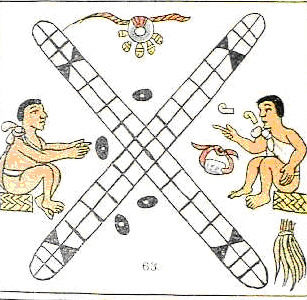 An image of the board and the game play of Patolli as depicted in Bernardino de Sahagún’s “General History of the Things of New Spain” published in 1569. 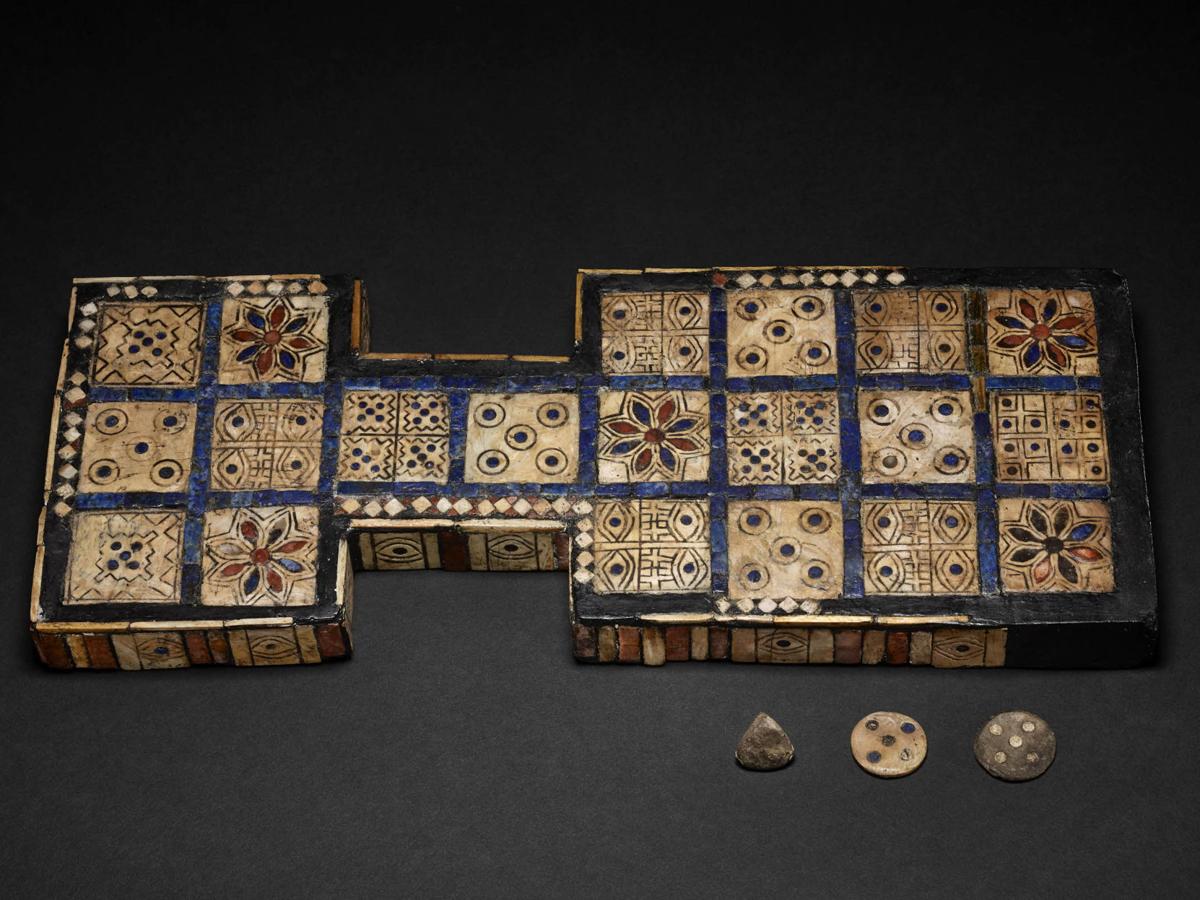 A board of the Royal Game of Ur on display at the British Museum. 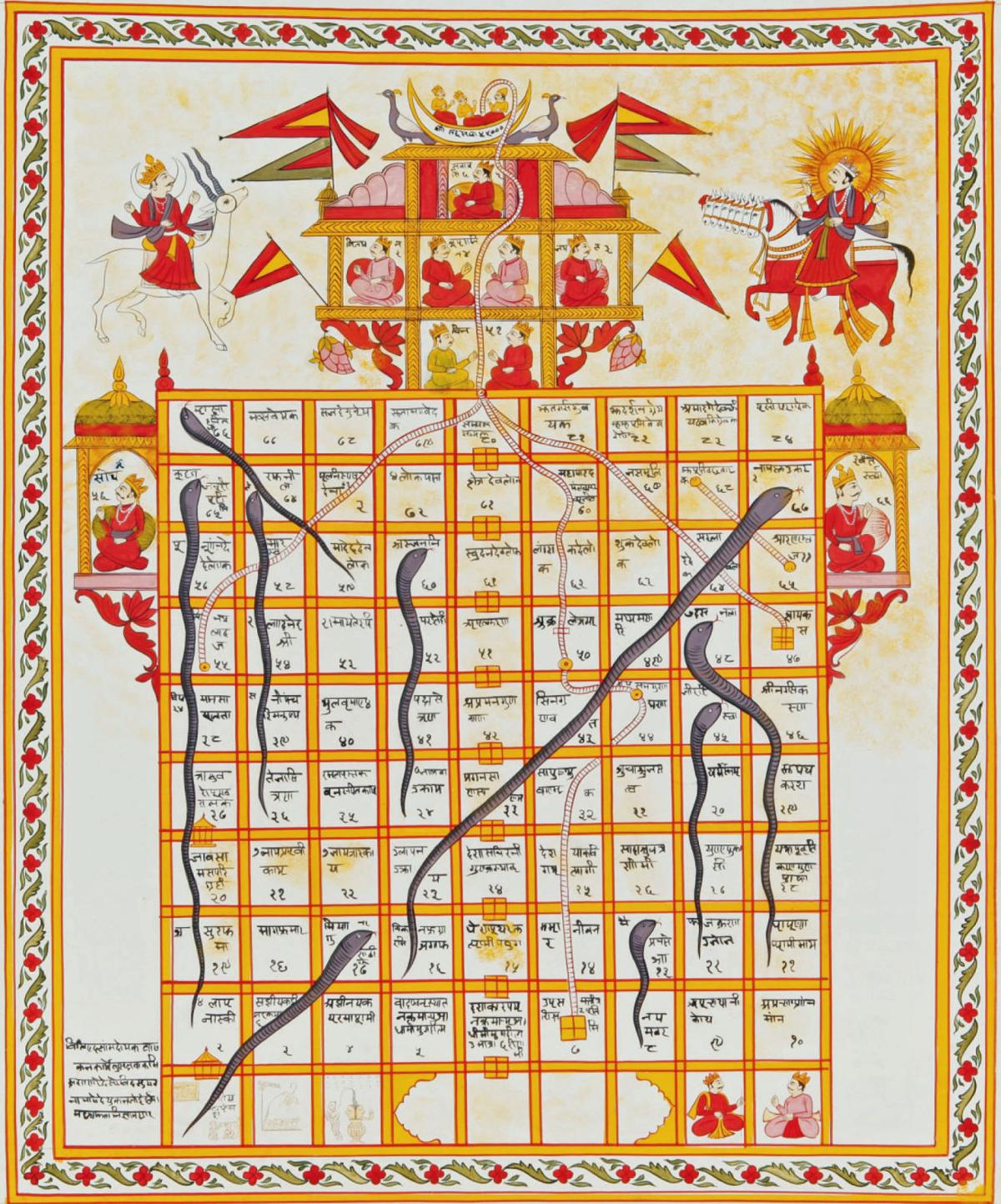 A 19th-century Moksha Patam gouache on cloth board and precursor to Snakes/Chutes and Ladders. 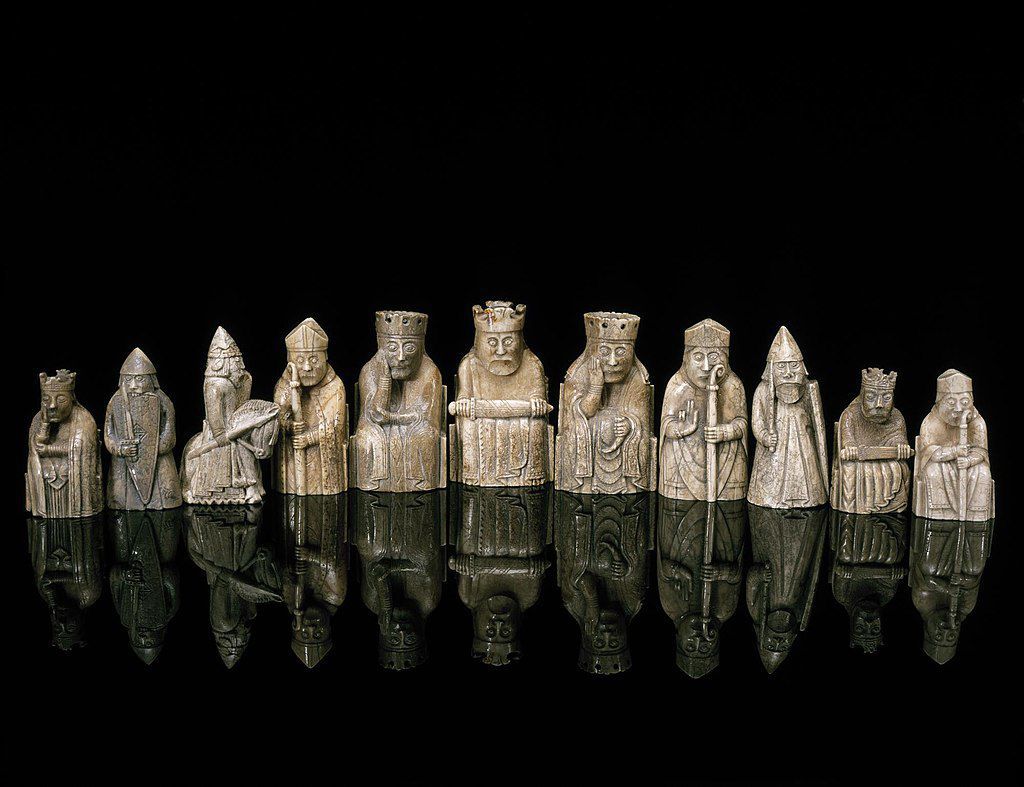 Humans have been gaming longer than we’ve had a language.

Over the millennia, games have evolved from simple diversions to games of intense strategy, utilizing skills of all kinds in order to win. They’re still fun, too.

The earliest known games uncovered by archaeologists come from a Mesopotamian burial plot found at Basur Hoyuk, dating back 5,000 years.

While the game itself has been lost, this complete set of pieces include colored stones and small figurines of animals in similar color coordination. Similar pieces had been found in other sites across modern day Middle East, but until the Basur Hoyuk discovery in 2013 they were believed to be simple counting stones and not part of a game.

Theses pieces were just the beginning of a colorful and vast history of games.

The game Senet hails from pre-dynastic and first dynasty Egypt, or around 3100 BC. The game play has been lost with the years but modern versions of the game have utilized the archaeological snippets of how to play.

Two players roll, or in this case, toss four sticks with different colored sides. You count the number of one of the binary colors and that is how many pieces you move. The goal is to get to the end first.

Senet started out simple enough as one of those basic diversions for royalty to pass the time. But within a few hundred years, the game began to take on religious overtones including what some archeologists believe as a kind of ancient Ouija board. By the Middle Kingdom, the game was thought to be a bridge between the living and the dead and therefore a way for both sides to communicate.

As the game faded from existence along with dynastic rule, another game kept on rolling.

The Royal Game of Ur

The Royal Game of Ur is about 4,500 years old and has continued to be played in one place or another throughout history.

Unlike Senet, the Royal Game of Ur has detailed instructions that have been handed down through the ages and were translated from a cuneiform tablet in the 1980s.

Players would race an opponent from opposite ends of the board while rolling a four-sided dice. It was possible for pierces to be captured but floral tiles on the board marked players as safe from takeover.

Other versions of the board exist including some from Egypt that have a set up for Senet on the opposite side.

You probably won’t find these games in your closet or down the board game aisle at Target, but one that you will find is actually pretty old.

Chutes and Ladders, or Snakes and Ladders as everyone else in the world calls it, originates from India in about the second century A.D., when it was known as Mokshapat or Moksha Patam and was used as more of a morality tool than an easy game for children back then.

The thought was when players ascend the ladders on the board that is the result of good deeds, whereas sliding down the snakes/chutes represented evil ones.

Just as the modern game’s iconography suggests, the ancient boards contained images of cause and effect albeit with religious tones including greed, murder and lust that would lead players down the snakes to asuras or power seeking demons, and the ladders featuring generosity and knowledge would lead you to a god or a version of heaven.

When the British colonized India they brought back the game and rebranded it Snakes and Ladders. In the ‘40s, Americans brought the game stateside and Milton Bradley rebranded it again, taking out the scary snakes, and turning it into Chutes and Ladders.

In pre-Columbian Mesoamerica, the ancient game of Patolli is a sharp turn from the moral game from India.

Patolli is a race/war game dating from the 16th century with a heavy influence from gambling originating from what is modern day Mexico. In it, two players would meet and show what they had to gamble with whether it was goods, precious stones, their homes or even their lives.

The players would then attempt to get their game pieces from one end of the x-shaped board to the other before their opponent. By doing so, they would win the game and whatever the other player gambled with in a winner takes all scenario.

While this version was popularized by the Aztecs variations of the game exist far beyond their empire.

When the Spanish conquistadors arrived in the Americas and conquered the Aztecs, they destroyed the game mats and any of the exact rules of how it was played.

Ah, the game of kings. Still held in high regard as a game filled with the thought that its mastery can be an indicator of genius.

In the sixth century the game, Chaturanga was developed where four players would control pieces all with specific movements with the end result being the capture of the king.

The game traveled and evolved to a two person game when Indian merchants brought it to Persia and it developed a new name, Shatranj and the common call of “check” and “checkmate” developed.

Then Arabic armies took control of Persia and the game found its way to Europe and by the end of the 12th century had taken hold there as well, eventually including a queen piece in the 15th to 16th century and becoming the game known today.