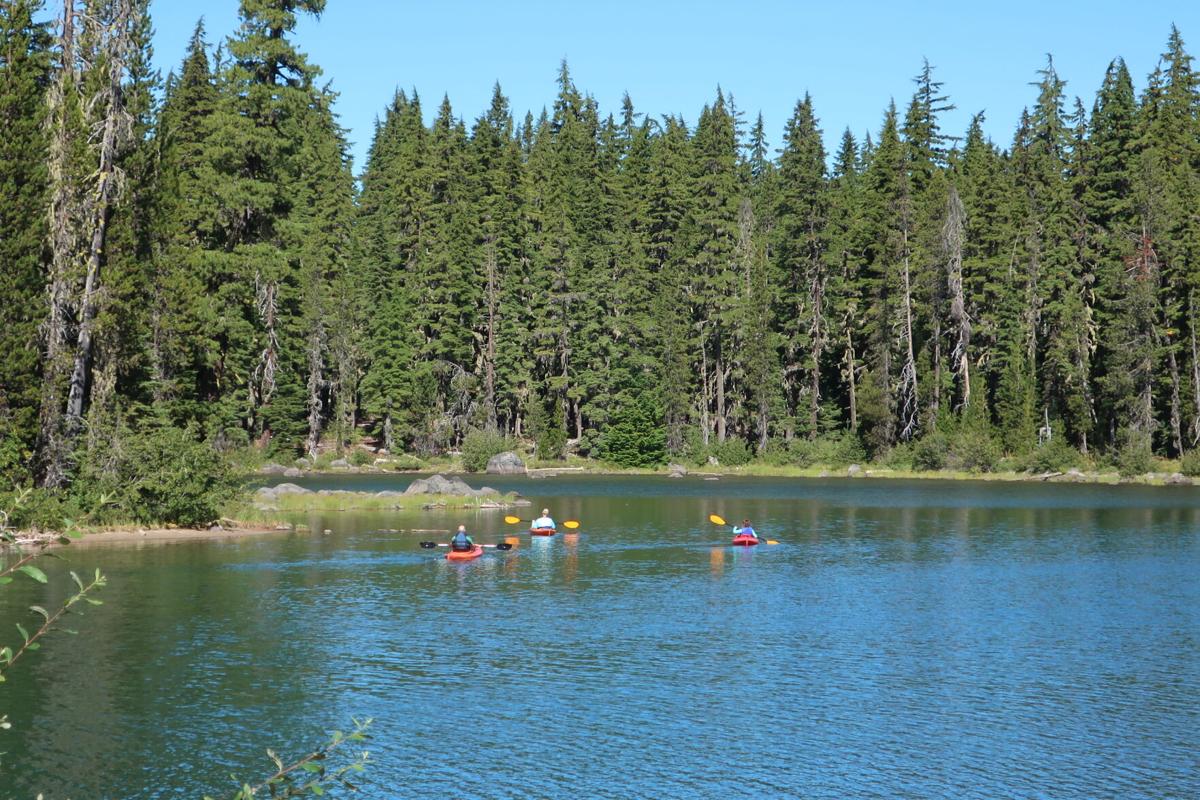 A covey of kayakers head out from Waldo North boat launch. 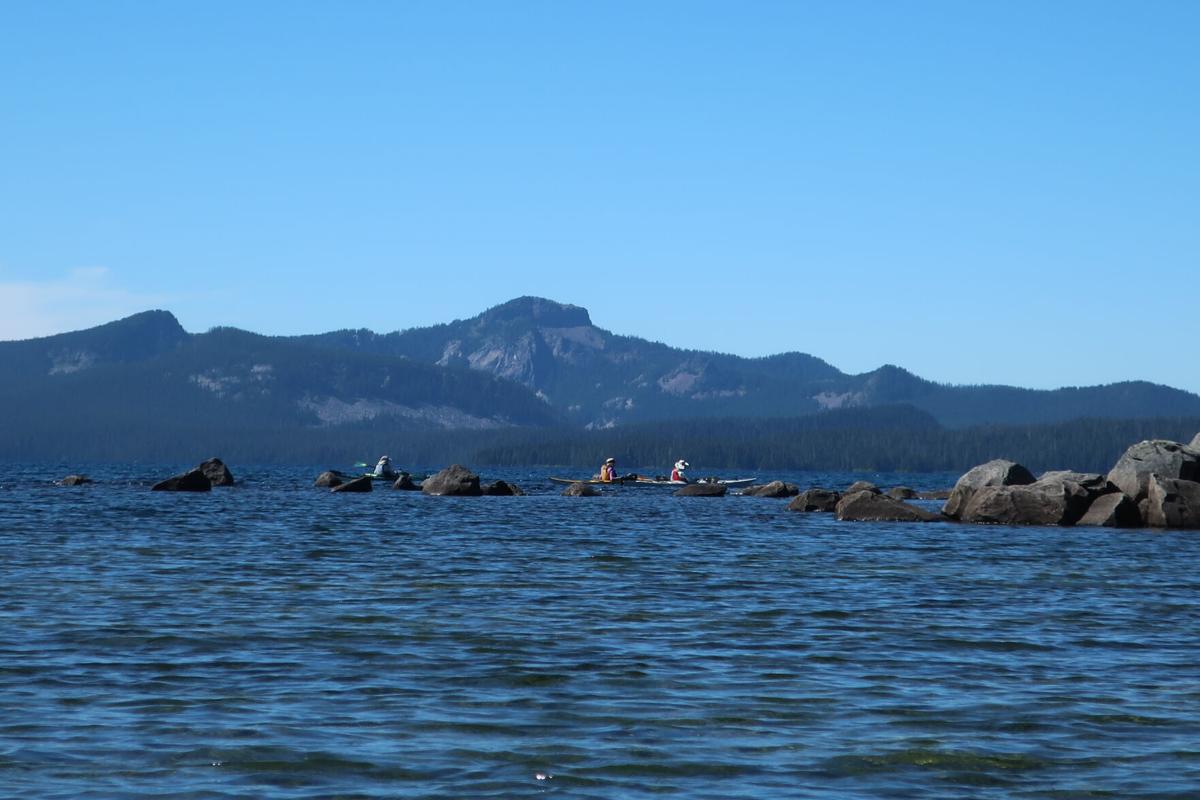 Kayakers cruise along a smattering of small islands. 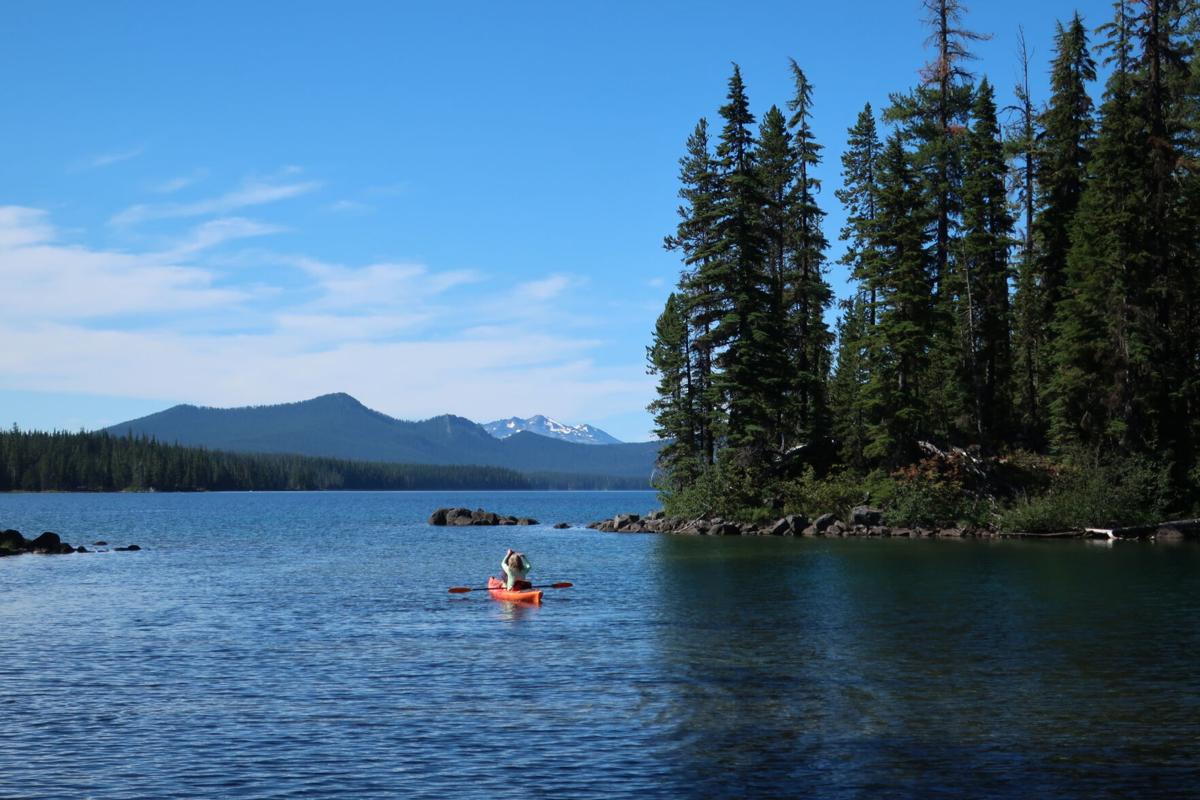 A solo kayaker checks out the view of the Cascades and snow-tipped Diamond Peak.

A covey of kayakers head out from Waldo North boat launch.

Kayakers cruise along a smattering of small islands.

A solo kayaker checks out the view of the Cascades and snow-tipped Diamond Peak.

WALDO LAKE — It’s not necessary to be clairvoyant to look into the depths of Waldo Lake.

It just takes a kayak, canoe, sailboat, stand-up paddleboard or some water craft to peer into the depths of one of the world’s clearest, or, with some imagination, “clearvoyant,” lakes. With a maximum depth of 420 feet, Waldo is Oregon’s second deepest lake — Crater Lake is the deepest at 1,942 feet. On windless days people have seen 120 feet down.

Opportunities to see and experience Waldo’s depths can be seasonally limited, with roads snow-covered much of the winter. And through most of spring and early summer views of the lake are commonly shrouded by thick clouds of blood-sucking mosquitoes. And with people eager to be outdoors during the coronavirus pandemic, on many days there have been nearly as many people as skeeters. Happily, during my recent midweek visit, the mosquitos were absent and the crowds relatively limited.

At the North Waldo Campground, one of the lake’s three Willamette National Forest developed campgrounds, I launched my kayak while my daughter, Molly, inflated her stand-up paddleboard. We were soon out on the lake, paddling near but comfortably distant from others. From the put-in, we angled south along Waldo’s western side, skirting and weaving around several small islands and visiting a series of inlets.

Morning paddles are recommended because Waldo is known for its often fierce afternoon winds. With a moderately early start, we encountered only a refreshing breeze. But after a lazy shoreline lunch, the blowhard winds helped accelerate our return back toward North Waldo.

Many people stick close to the dock and nearby islands for relatively brief lake escapades, so it didn’t take long to have a large swath of Waldo to ourselves. But whether close to shore or out on the lake, views into Waldo’s depth dazzle. Close to shore, its crystal-clear waters reveal the lake bottom. Farther out, sunlight and gentle breezes caused the crystalline water to shimmer, sometimes in psychedelic tones and colors that photographs can’t capture. Not to be forgotten is Waldo’s setting, surrounded by a circle of Cascade peaks, most notably snow-tipped Diamond Peak.

Waldo is a lake that’s loved and used. Kids with wetsuits dove in from paddleboards. Instead of morning coffee klatches, groups of women enjoyed chit-chat while cruising socially distant. Some kayakers with sit-on-top models carted their dogs, most notably one woman whose dog’s “What-am-I-doing-here?” barks were overpowered by her boisterous “Sit down!” yelps. Much quieter and happier were a father and two young children wearing flotation devices who ventured off shore to splash and explore Waldo’s very swimmable waters. There were several paddleboarders, including two standing tall and carrying backpacks probably used on an overnight expedition along the lake’s expansive shoreline. Because no motorized boats are allowed — boats with electric motors are permitted, but there is a 10-mph speed limit — expect relaxing and noiseless paddles (except for barking dogs and owners).

There’s a lot to explore at Waldo, Oregon’s second largest natural lake with 9.8 square miles of water surface, or 6,298 acres. The lake’s elevation is 5,414 feet, so it features cool nights and a relatively short summer season. According to geologists, Waldo was formed by tectonic fault block subsidence and modified by glaciers and has a thin layer of soils, averaging 3 and 6 feet deep, that were modified by weathered volcanic ash and boulders from glacial outwash.

Waldo is also popular for a variety of recreationalists. The Waldo Lake Trail, also known as the Jim Weaver Trail, loops around the lake. The shoreline’s length is 21.7 miles, but the loop trail is reportedly about 25 miles. It’s a favorite for mountain bikers. The lake borders the Waldo Lake Wilderness, which is easily accessed from the trail, while more hikes are available from spur trails. Bikers, hikers and paddlers will also see impacts of the 1996 Charlton Fire that blackened the lake’s north side, although pockets of Douglas fir, Western hemlock and, of course, fireweed, are evident. We viewed the fire’s impact while paddling south from the North Waldo Campground.

Waldo has two other lakeside campgrounds, Islet and Shadow Bay. In all there are more than 200 developed sites with toilets and potable water. Some campsites can be reserved months in advance through recreation.gov, something that’s especially recommended during peak summer periods.

The little islands near North Waldo are popular for lunch and picnic stopovers, but overnight camping is not allowed. Camping is allowed at 50 primitive, dispersed campsites (contact the Willamette’s Middle Fork Ranger District at 541-782-2283 for more information).

What makes Waldo so clean and clear? It’s because the lake has no permanent inlet to bring in nutrients that could stimulate plant growth. Its clarity is why the Oregon Environmental Quality Commission is in the process of designating Waldo, and Crater Lake, as Outstanding Resource Waters, which would lead to rules “to ensure they are protected for future generations.” Any rules, however, would reportedly not affect currently allowed activities.

Who is Waldo? John B. Waldo was an Oregon conservationist, judge and politician who in the 1880s explored the Cascades Range and is credited with helping lay the framework for the Pacific Crest Trail in Oregon and far Northern California.

For many reasons, Waldo is clearly a beautiful lake.