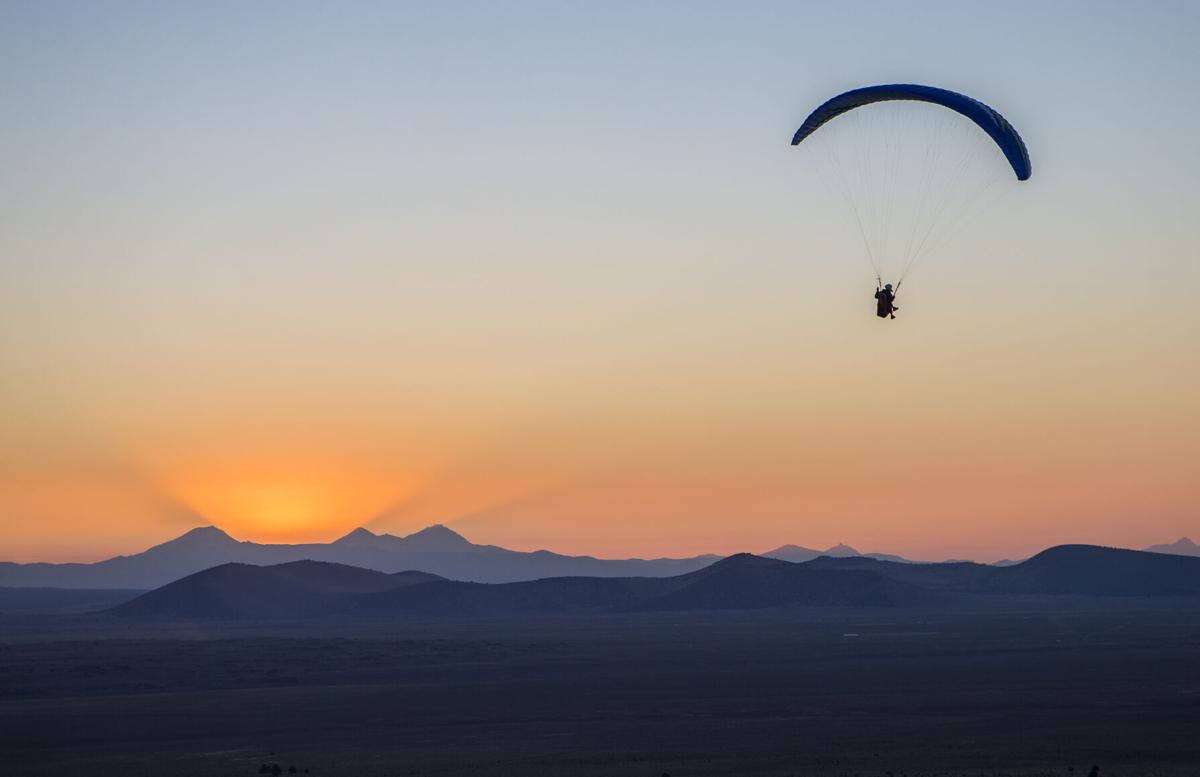 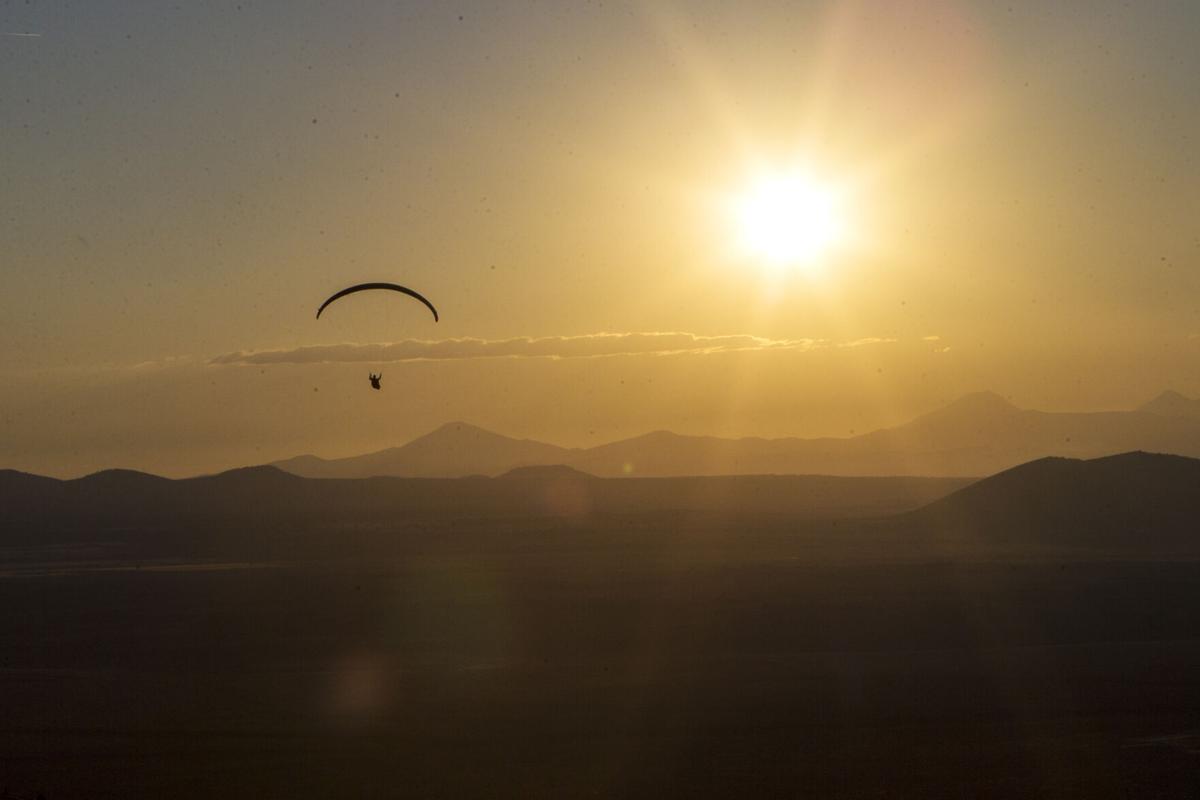 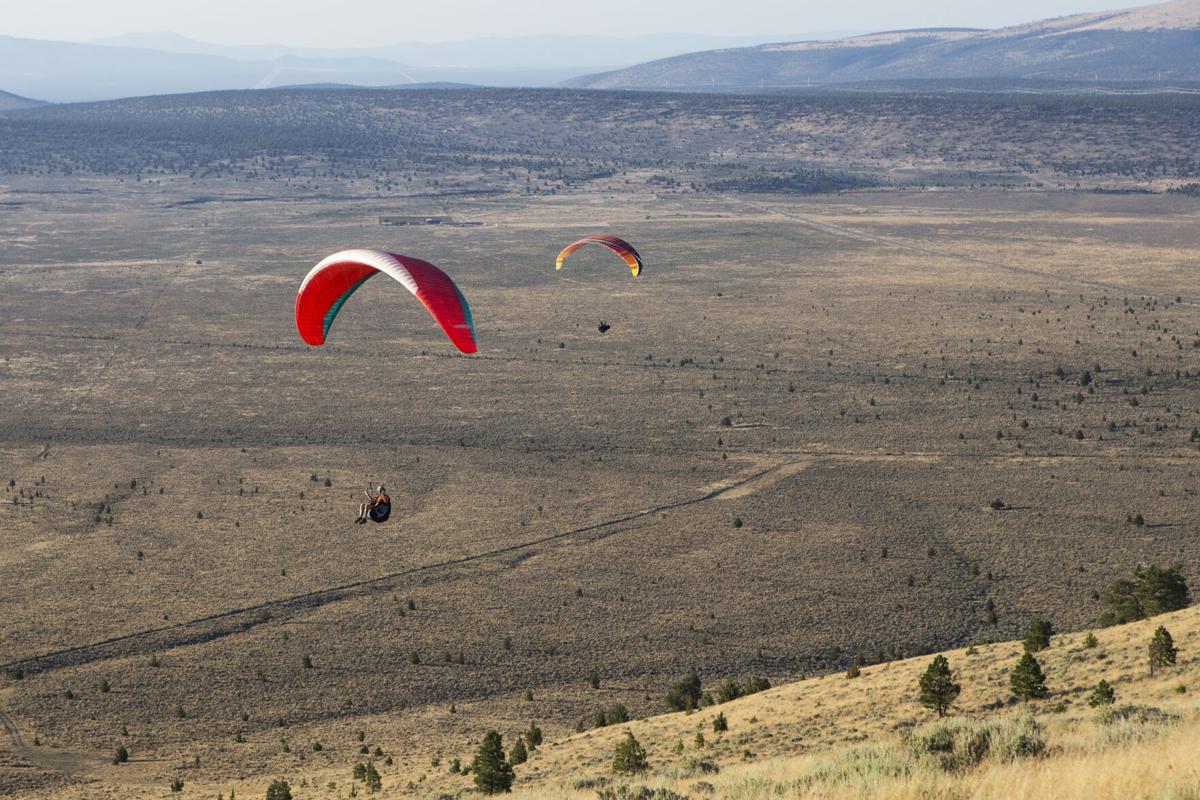 ORIG 8/01/20 A pair of paragliders fly along a ridgeline in an attempt to gain altitude while flying at Pine Mountain east of Bend on Saturday, Aug. 1, 2020. 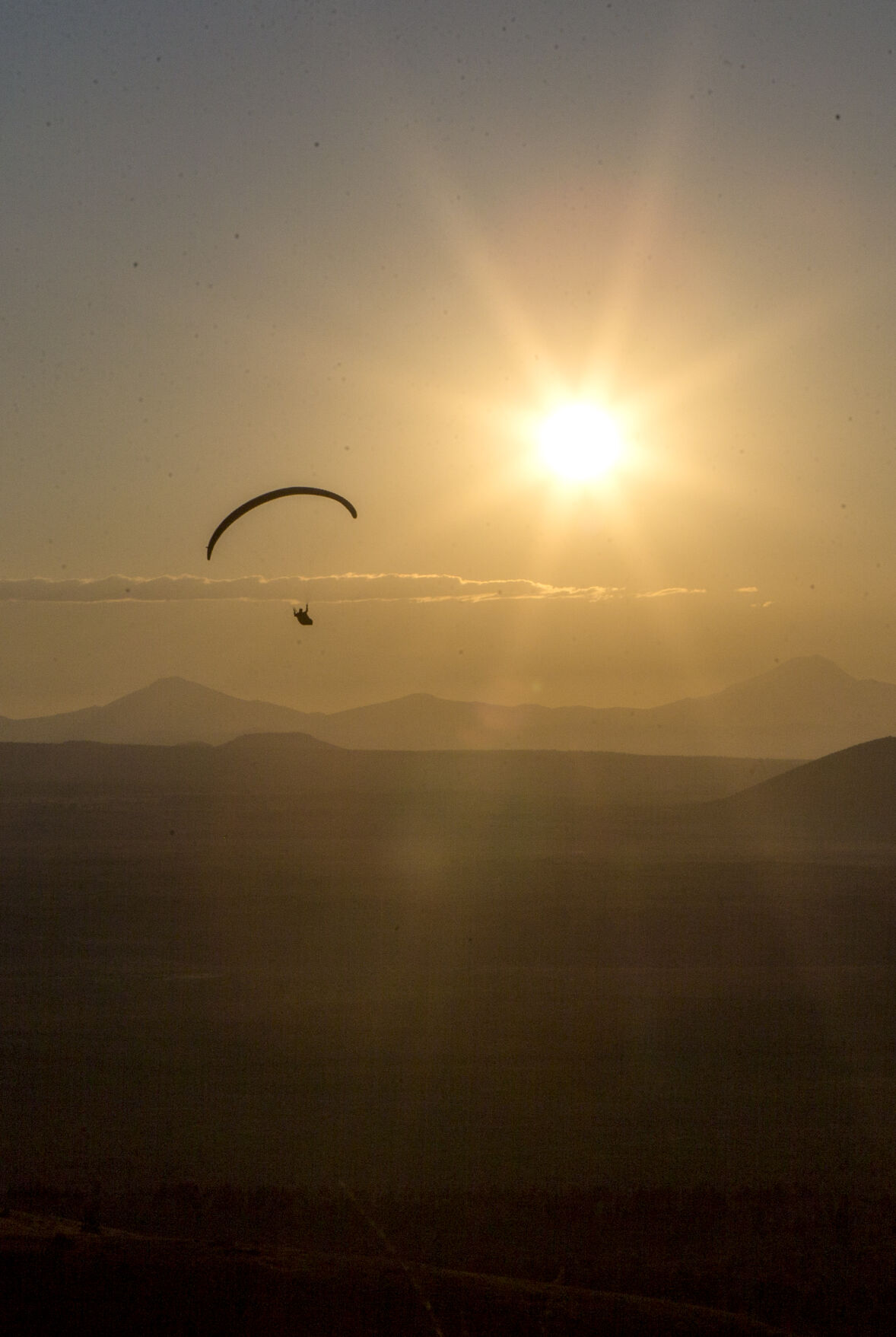 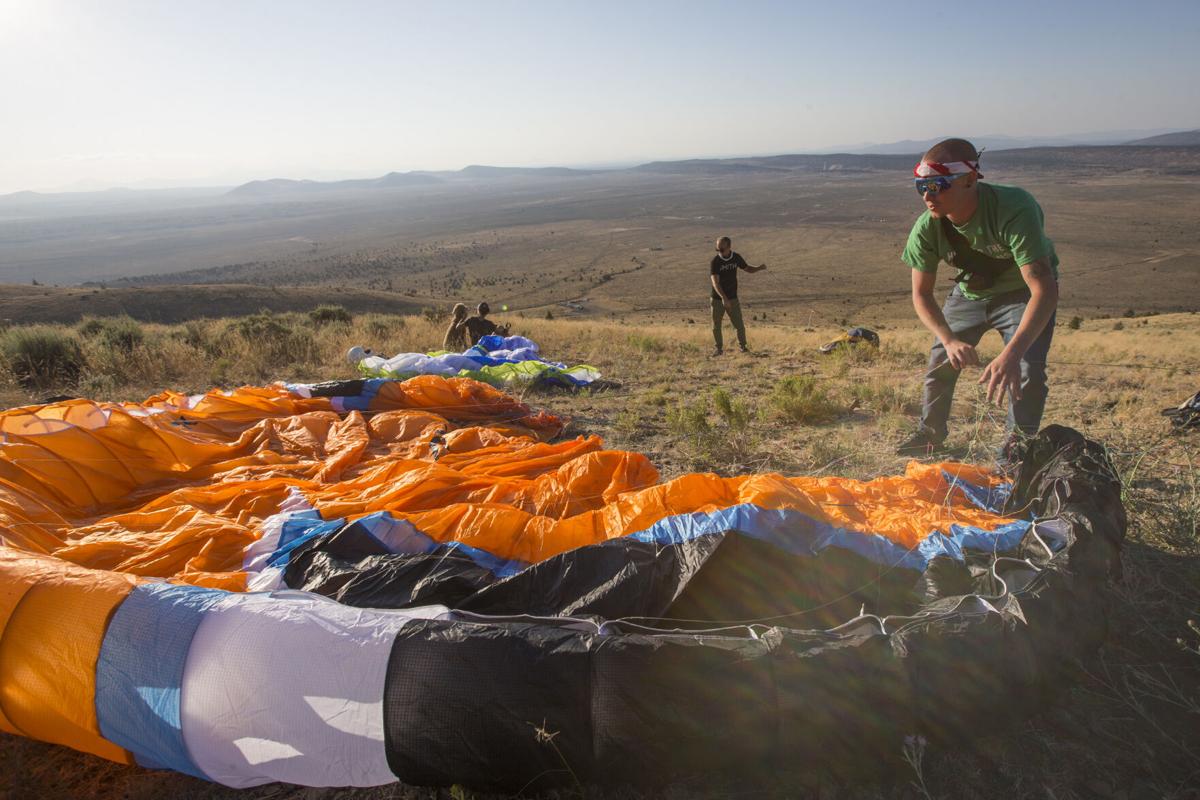 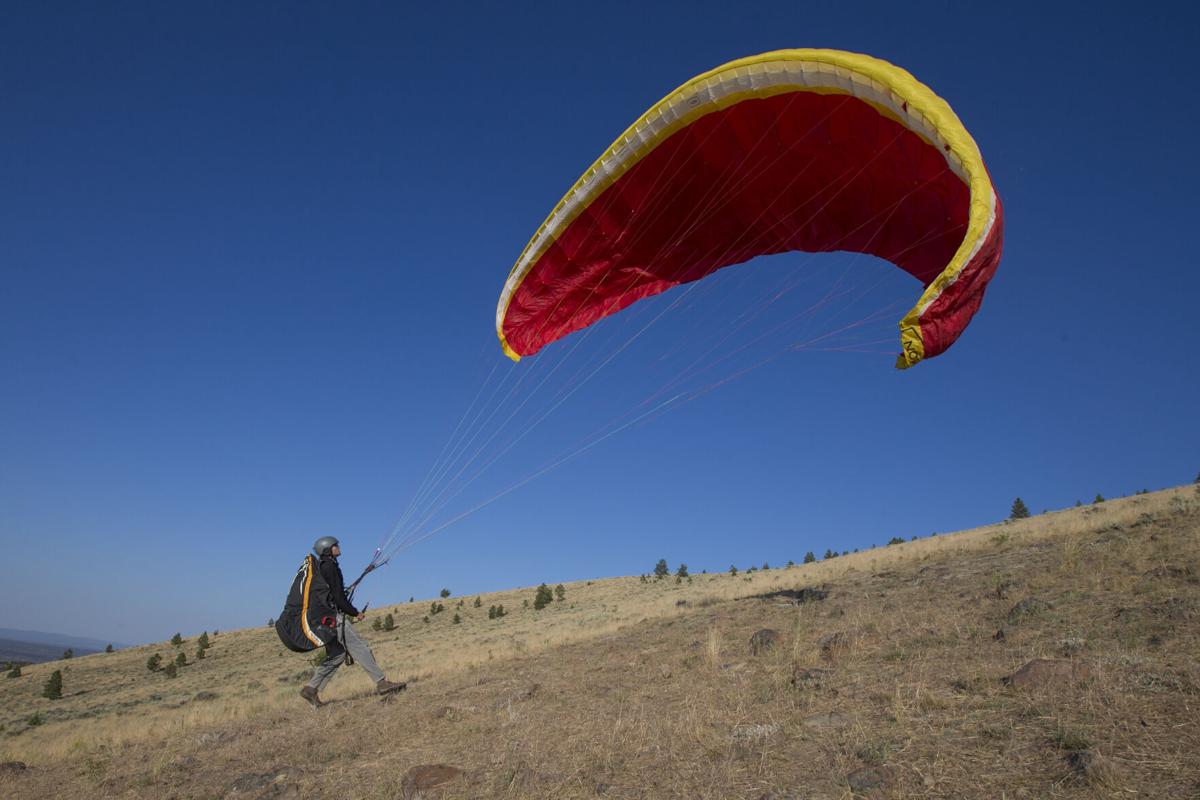 ORIG 8/01/20 Quinn Rasmussen of Bend uses a light gust of wind to launch while paragliding at Pine Mountain on Saturday, Aug. 1, 2020. 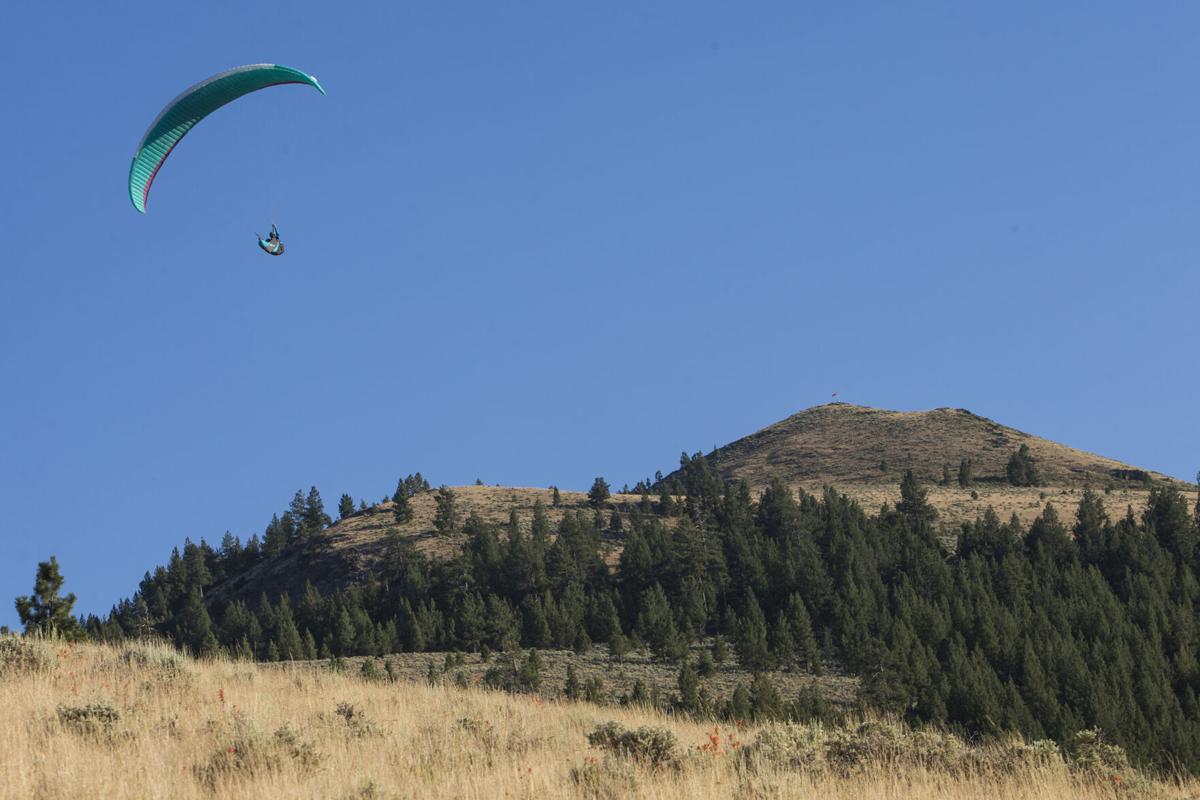 ORIG 8/01/20 A paraglider works a ridgeline to gain altitude while flying at Pine Mountain east of Bend on Saturday, Aug. 1, 2020.

ORIG 8/01/20 A pair of paragliders fly along a ridgeline in an attempt to gain altitude while flying at Pine Mountain east of Bend on Saturday, Aug. 1, 2020.

ORIG 8/01/20 Quinn Rasmussen of Bend uses a light gust of wind to launch while paragliding at Pine Mountain on Saturday, Aug. 1, 2020.

ORIG 8/01/20 A paraglider works a ridgeline to gain altitude while flying at Pine Mountain east of Bend on Saturday, Aug. 1, 2020.

Saturday was paragliding pilot graduation day at Pine Mountain, where a handful of them were getting ready for their final test — landing safely in the parking lot.

But it is not the end of the world if they miss the mark and land into the sounding desert near the parking lot.

“Don’t do something stupid to hit the spot, make smart choices,” instructed Kimberly Phinney, a Bend native. She has taught paragliding around the world before returning to Central Oregon to open White Owl Paragliding. “Avoid the rock wall, avoid cars. We have a whole life of paragliding ahead of us.”

Then they begin their climb up the side of Pine Mountain, with their 40-pound packs, eager to take flight.

“I’ve been rock climbing and I’ve kinda peaked out,” said Tyson McKenzie of Bend. “I wanted to find something I could do on my own. When you rock climb you need your partner with you to be a belayer. Now I can go fly whenever I want.”

The class will be upgrading to a P2 Novice rating, meaning they have shown knowledge of the basic skills necessary to fly and practice without direct instructor supervision.

To level up, the pilots must attend a minimum of eight hours of ground school, 35 flights at the discretion of paragliding instructor, have 10 days of flying, and at least five hours of airtime. An additional 33 skills include demonstrating how to layout and preflight the wing, harness and backup reserve parachute and showing at least two high-wind launches between 10-15 miles per hour.

Then there is an 11 -section, 103-page student manual with topics ranging from speeds to fly, types of altitude, active piloting, aerodynamic terms and atmospheric pressure.

“If someone asked me what would be a good thing to learn before getting into this it would be meteorology,” said Cameron Thompson, who had more than 100 hours of flying helicopters in New Zealand before moving to Eagle Crest. “I’ve done more meteorology doing this than I did with helicopters.”

Learning to paraglide in Central Oregon is trickier compared to other places, Phinney said. There are places on the coast that she takes her class for practice that have a more consistent wind stream; in the desert at Pine Mountain, the gusts of winds create almost a breathing sensation with the wind, Phinney explains. The evening is the best time because the wind is more consistent.

But if you can learn to fly in Central Oregon, chances are you will be able to take flight just about anywhere.

“Not the easiest place to learn,” Phinney said. “But if you learn here you are going to be a fantastic pilot.”

After unpacking their wing, making sure that its cables to the wing are not tangled, and there are no tension knots (a well-packed wing should have minimal knots and tangles, Phinney points out) they make sure that the reserve parachute handle is within reach and then straps into their packs with carabiners. Soon, they will be taking flight.

“As a climber, you learn to trust your gear. Same with this,” McKenzie said. “ It doesn’t matter if you are 50 feet in the air or 1,000 feet in the air: It is the same difference. It’s better to be higher up when something goes wrong because you have time to fix it. We all have reserve parachutes if something goes really, really wrong.”

The pilots then prepare for takeoff. Facing the mountain, they have to patiently wait for the wind conditions to be right before deploying the wing and taking off. Because these are still novice pilots, the takeoffs are still a bit shaky, almost like a baby bird learning to fly for the first time.

But once the wind is right and the takeoff is executed correctly, the pilots take off and glide smoothly into the evening sky.

“Once you know you are doing it right,” Thompson said, “it is as freeing as you can be because you are now in a three-dimensional space. It is freeing because it is just you up there.”

“When you do everything right, there is nothing like it,” added McKenzie.