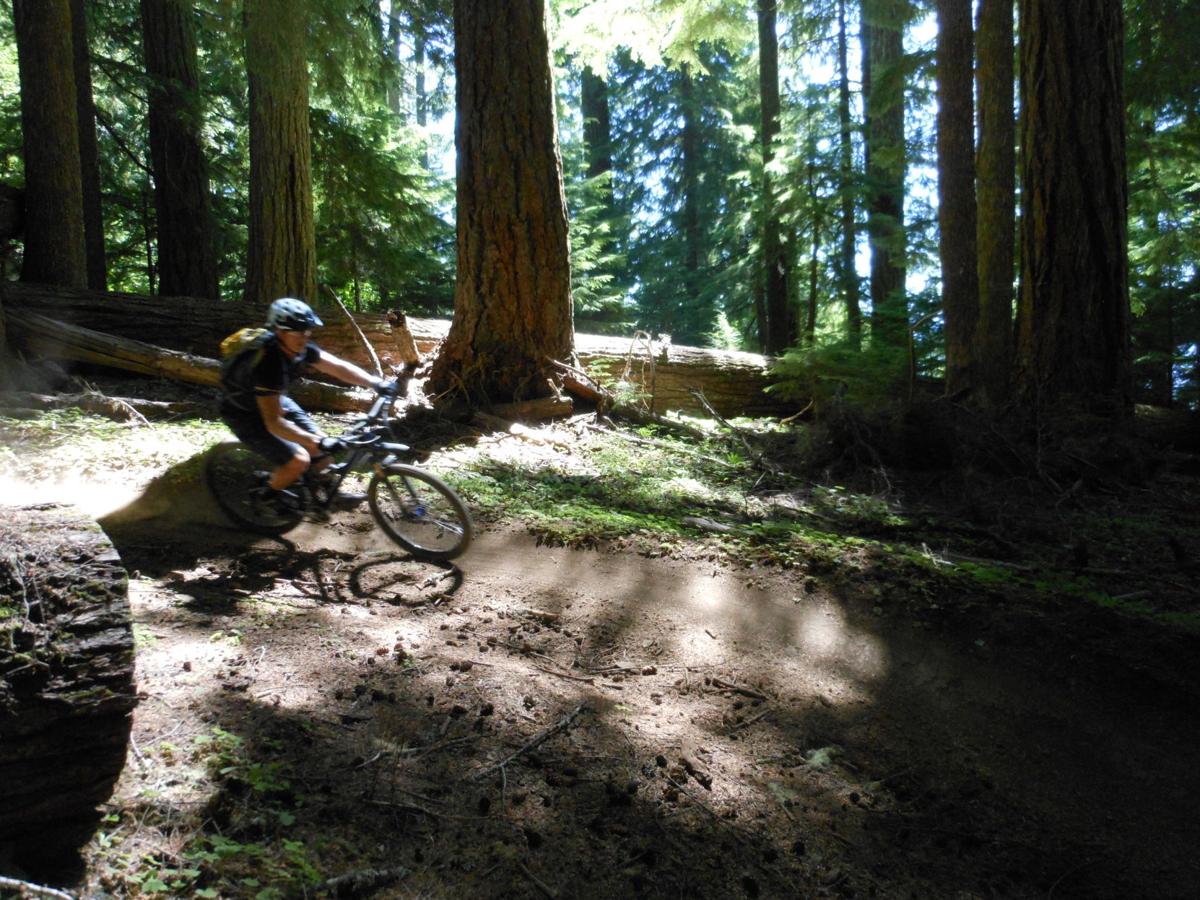 A mountain biker swoops through a turn on the Alpine Trail near Oakridge. 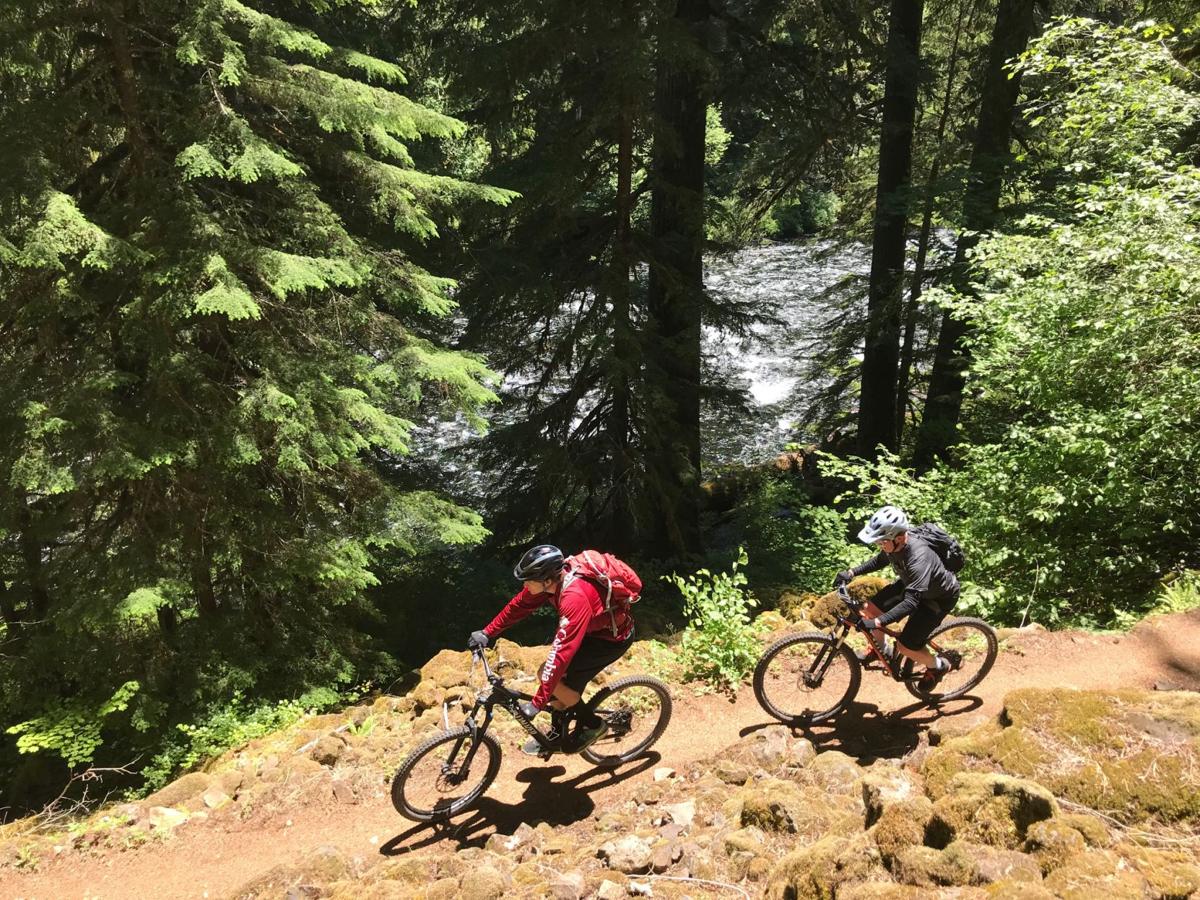 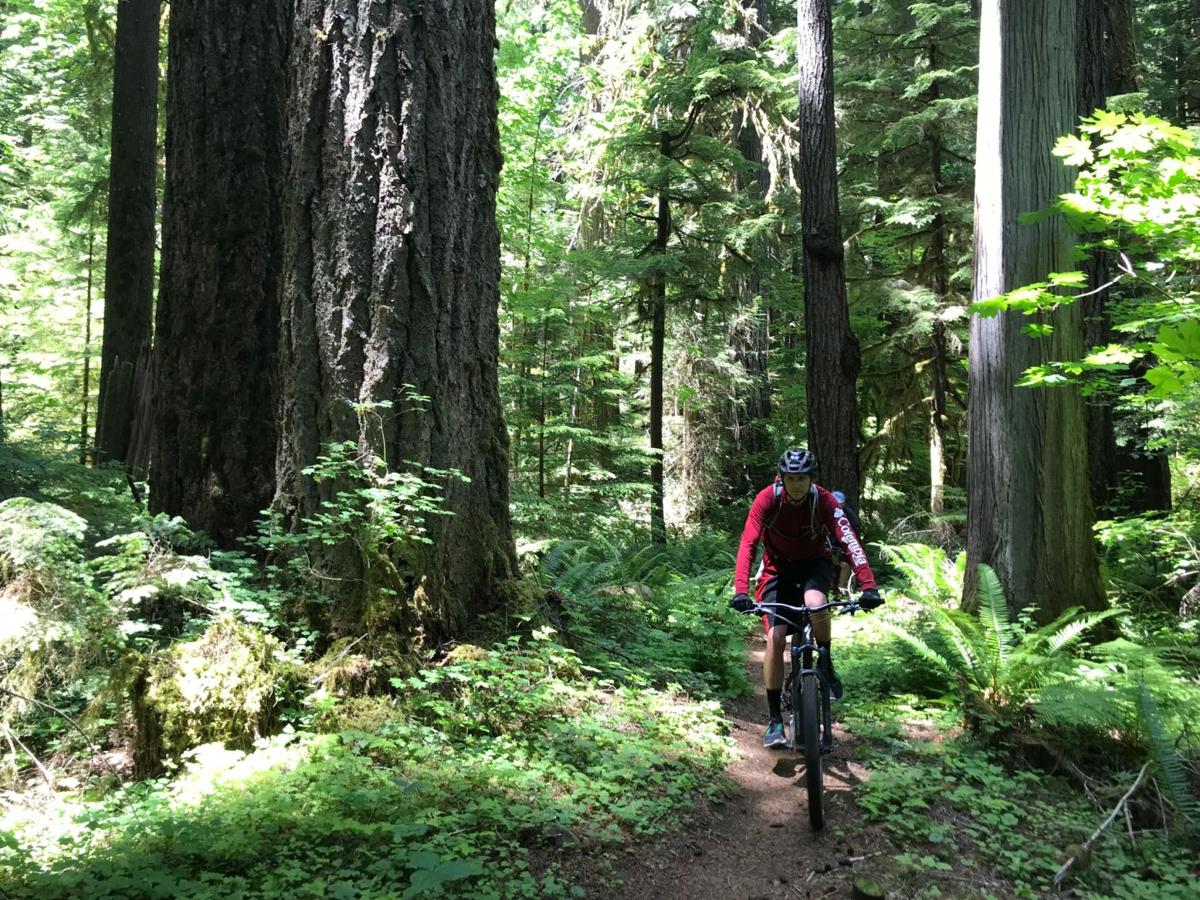 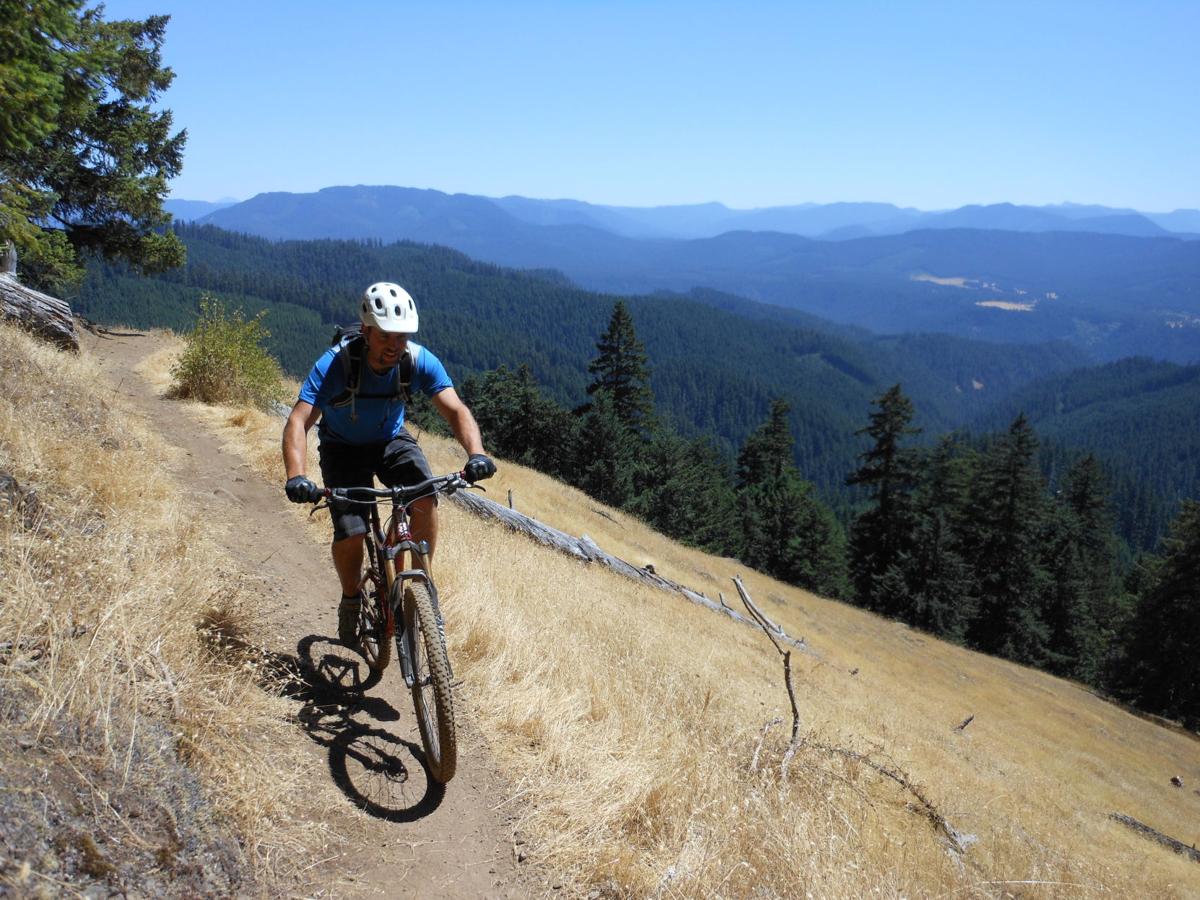 A mountain biker cruises along the Alpine Trail above Oakridge. 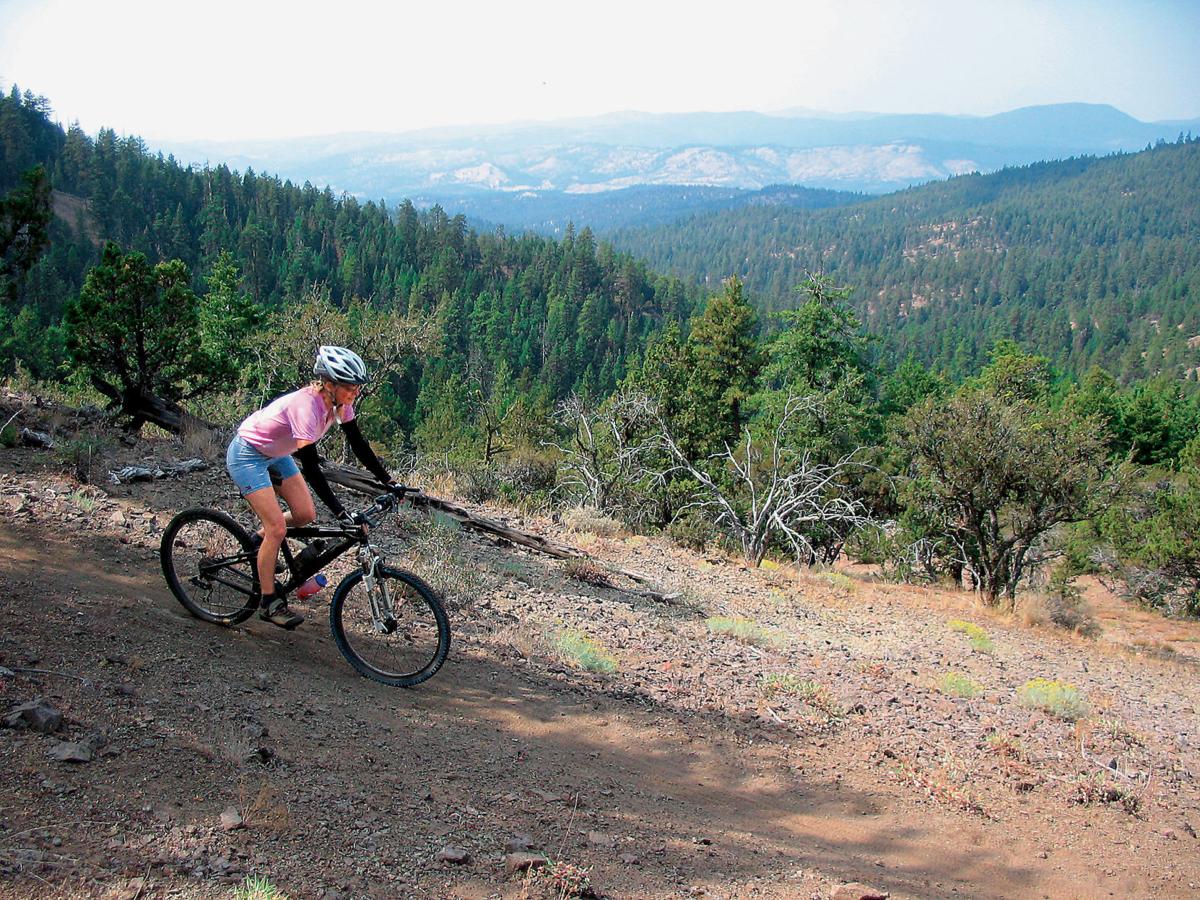 A rider travels down the Lookout Mountain trail in the Ochoco Mountains.

A mountain biker swoops through a turn on the Alpine Trail near Oakridge.

A mountain biker cruises along the Alpine Trail above Oakridge.

A rider travels down the Lookout Mountain trail in the Ochoco Mountains.

This time of year, our mountain biking paradise here in Central Oregon can get encumbered with sand, as hot, dry weather can lead to less-enticing trail conditions.

The vast network of singletrack west of Bend can become a monotonous slog through dust. Some rainfall can change that, but those willing to venture farther away from Bend can find some thrilling trail options that often are not as sandy.

Lookout Mountain in the Ochocos

The Ochocos have it all: gut-busting climbs, cliffside exposure, electrifying descents, spectacular vistas, wildflowers and solitude.

Located east of Prineville, the Ochocos feature trails that are different from those closer to Bend, offering mountain bikers a more challenging, backcountry experience in steep terrain dotted with grassy meadows and towering ponderosa pines.

Lookout Mountain, the highest point in the Ochocos at 6,926 feet, is probably the location in the mountain range most frequently visited by bikers. The summit can be reached via several routes, but the highlight is the descent along the Lookout Mountain Trail, which features 8 miles of fast, rumbling downhill. The trail also often remains somewhat firm and tacky throughout the summer.

Reaching the Summit of Lookout requires a 10-mile climb. The first 6 miles are along Road 42, starting from the Ochoco Ranger Station near the bottom of the Lookout Mountain Trail. The next 4 miles include steep singletrack. Certain areas of the trail are lush and green, bringing to mind trails on the west side of the Cascade Range.

The panorama atop Lookout provides a glimpse of Oregon’s diverse terrain, the brown and barren desert to the east and the dark green of the Ochocos to the west.

While the Lookout Mountain Trail is extremely technical in the top sections, it becomes gradually more smooth and flowy as riders descend. The downhill route ends at Road 42, just across the road from the Ochoco Ranger Station.

The terrain in the Ochocos is rugged and remote, and it offers a sense of adventure and isolation that is sometimes missing on crowded Central Oregon trails.

The 26 1/2-mile McKenzie River National Recreation Trail can certainly be completed in one day by a motivated mountain biker. But in my experience, the ride is much more enjoyable when the technically demanding upper portion is skipped.

The McKenzie River Trail , which straddles the border of Lane and Linn counties on the western flank of the Cascade Range, is known for the clear, rushing water of the river, spectacular waterfalls and towering old-growth Douglas fir trees. Because of its location deep in the forest, the trail remains mostly sand-free throughout the summer months.

It starts out easy around the west side of Clear Lake and becomes extremely technical over the rugged lava rock near the Sahalie and Koosah waterfalls all the way to Trail Bridge Reservoir. From the reservoir, the trail becomes a smooth path of flowing singletrack down to the McKenzie Bridge Ranger Station at its south end.

The trail is located pretty much halfway between Bend and Eugene along state Highway 126.

One constant along the trail — and what makes it so different from any trail in Central Oregon — is the lush greenery of the Willamette National Forest. Bright green ferns, moss-covered Douglas firs and endless deciduous trees line the trail and provide a nearly constant canopy. The forest is so thick in spots that heavy shade is almost constant.

The Alpine Trail is the crown jewel of the 300 miles of singletrack in the Oakridge area, about a two-hour drive southwest from Bend and a 45-minute drive southeast from Eugene.

The trails near Oakridge are tucked into the sometimes rolling, sometimes steep hills of the western slope of the Cascade Range.

Unlike Central Oregon, where the gently rolling east slope of the Cascades offers gradual climbs that lend the area to more loop rides, the Oakridge area often requires shuttles.

Also unlike Central Oregon, the Oakridge trails do not become particularly dusty during the summer, instead staying relatively tacky and firm.

After Windy Pass, the Alpine Trail is about 7 miles of continuous downhill, immersing mountain bikers in a deep, dark forest, with stands of trees hundreds of years old and several feet wide.

What were you thinking??? Mountain biking and trail-building destroy wildlife habitat! Mountain biking is environmentally, socially, and medically destructive! There is no good reason to allow bicycles on any unpaved trail!

Bicycles should not be allowed in any natural area. They are inanimate objects and have no rights. There is also no right to mountain bike. That was settled in federal court in 1996.