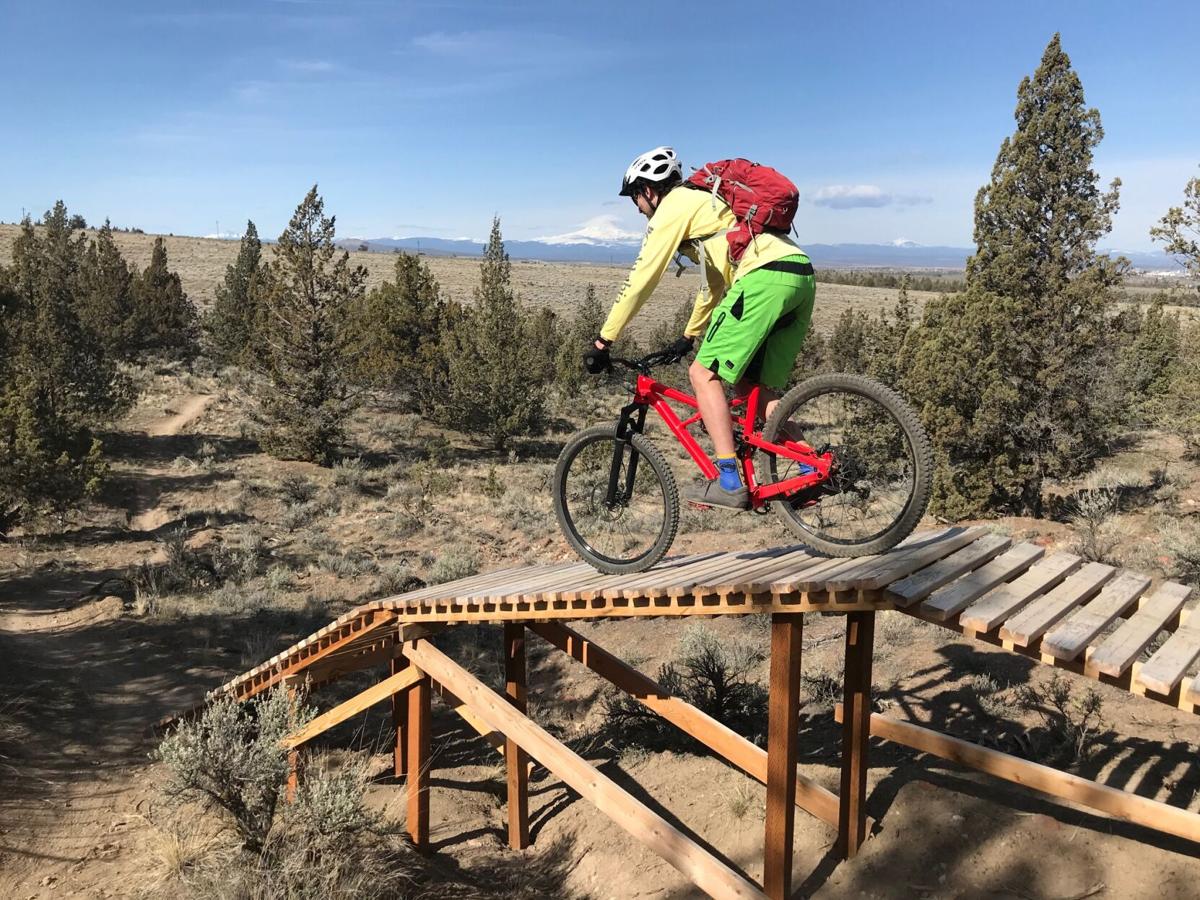 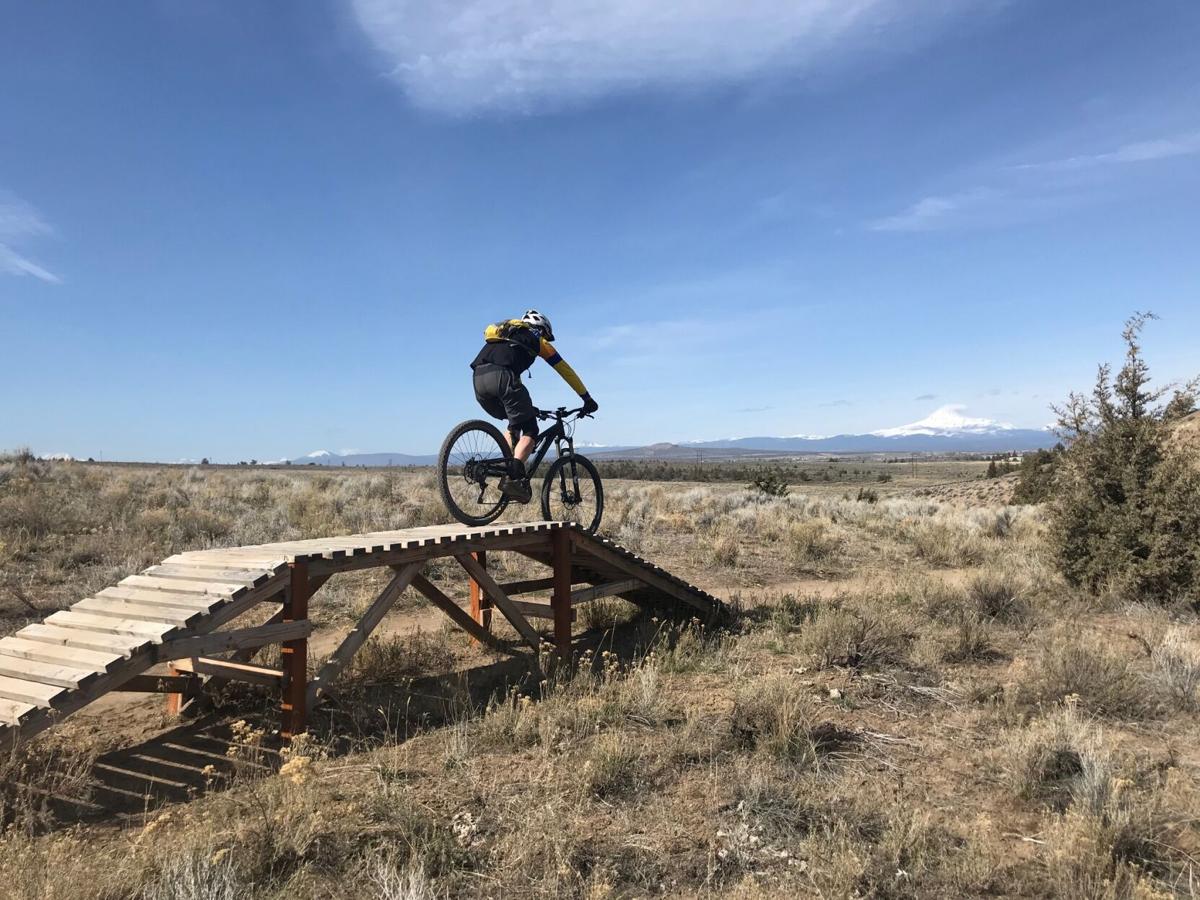 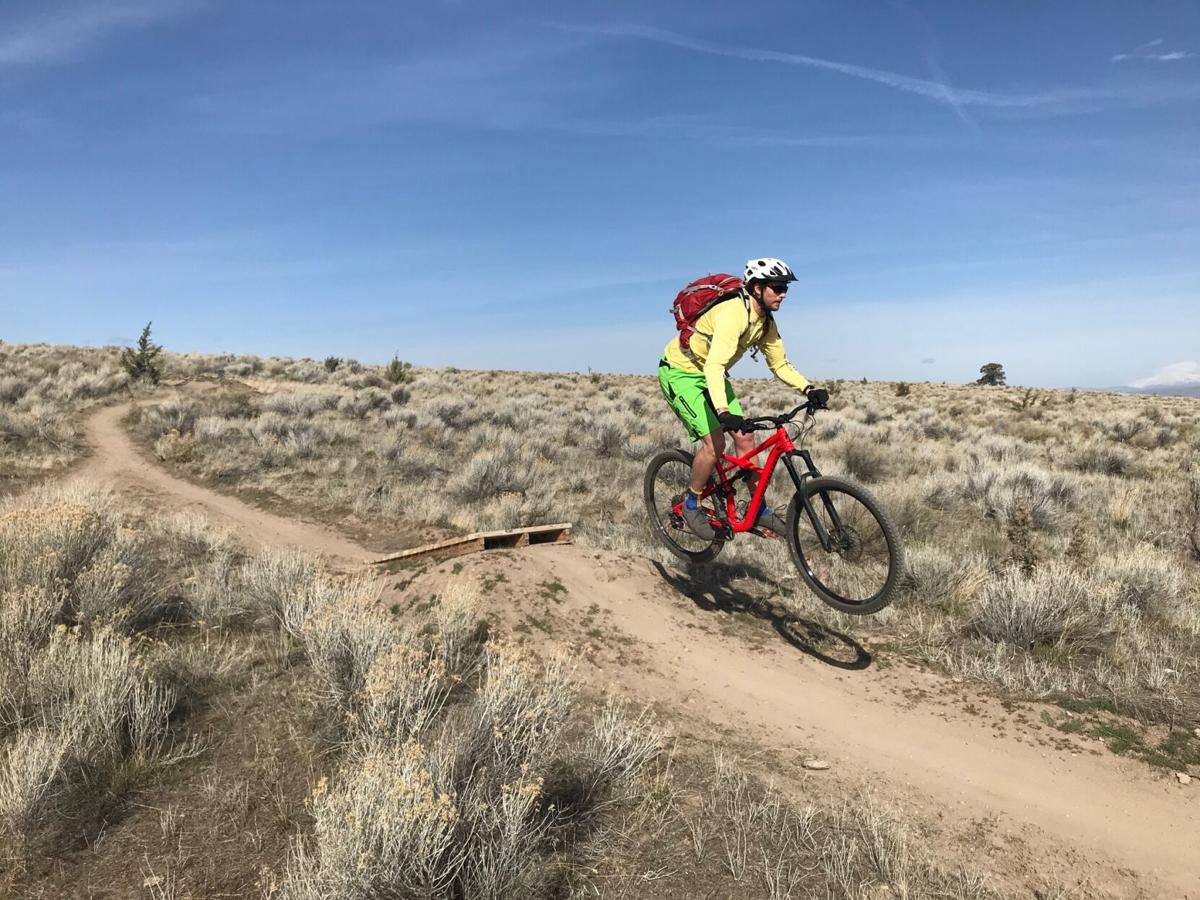 Andrew Williams, of Bend, flies off a jump feature at the Madras East Hills trail system on Sunday. 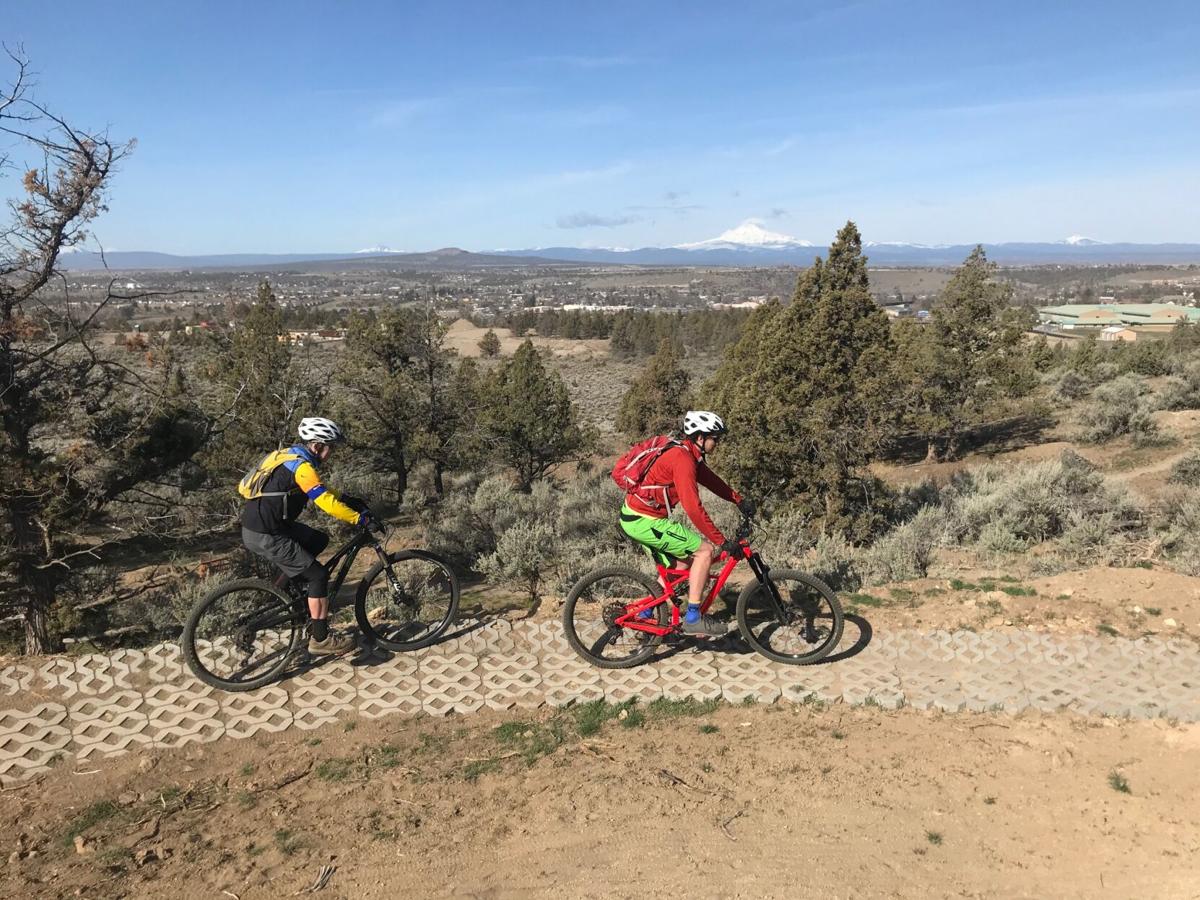 Bend's Mark Johnson, left, and Andrew Williams ride concrete pavers on the west side of the Madras East Hills trail network on Sunday. 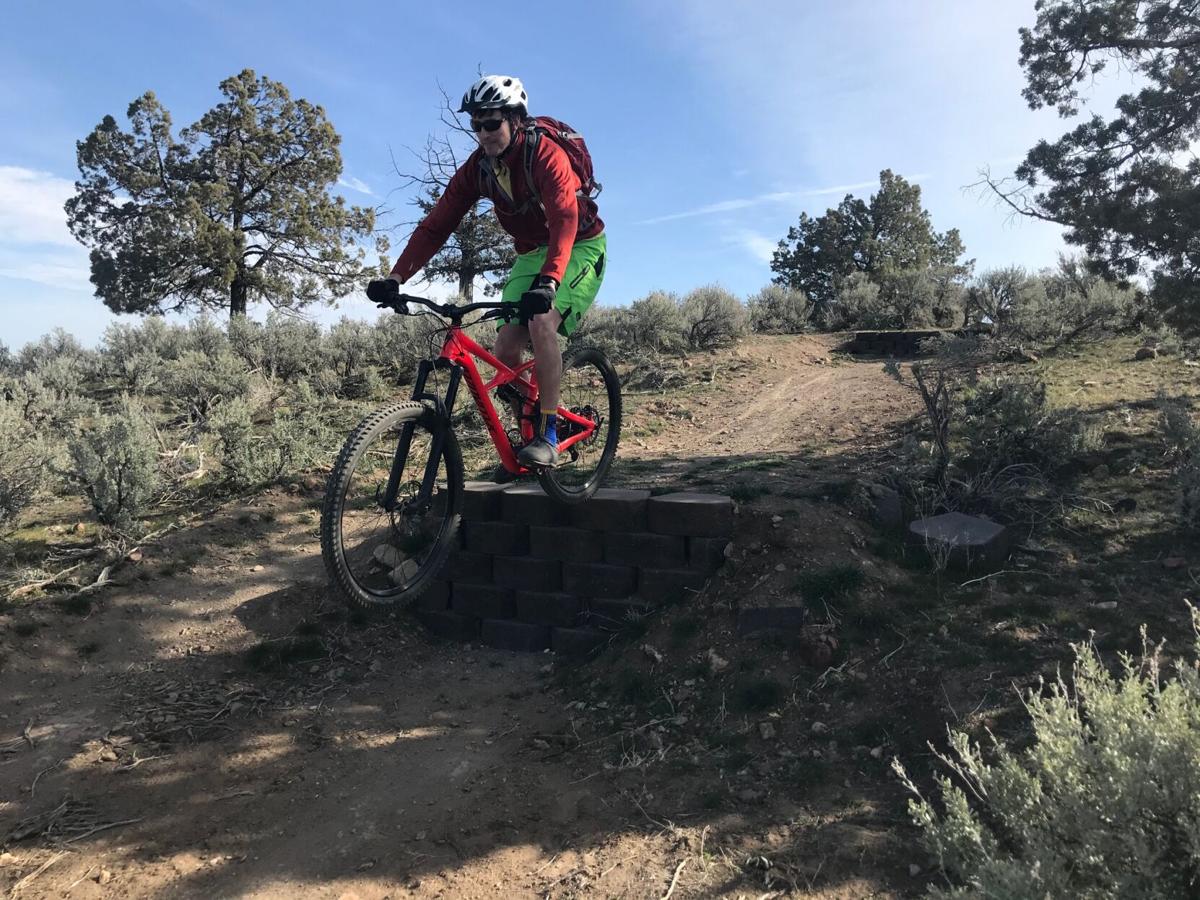 Andrew Williams, of Bend, flies off a jump feature at the Madras East Hills trail system on Sunday.

Bend's Mark Johnson, left, and Andrew Williams ride concrete pavers on the west side of the Madras East Hills trail network on Sunday.

MADRAS — To the west, Mount Jefferson and the Three Sisters glowed a bright white against a clear blue sky. Just below us, winding down an otherwise unimpressive hill in the middle of the high desert, were five different trails, all filled with jumps, berms, concrete pavers and wood features. A mountain biker could spend most of a day here, climbing and then riding down a different trail packed with freeride flavor.

Combine the efforts of visionary mountain bikers and forward-thinking land managers and the result is the Madras East Hills trails, the latest playground for mountain bikers in Central Oregon.

Led by the Madras Chapter of the Central Oregon Trail Alliance (COTA), trail work on Madras East Hills began in 2019 and has transformed the area into a true destination for cyclists coming from Bend, Redmond and even Portland.

“We’ve had a lot of folks come out,” said Brennan Morrow, the Madras Chapter representative for COTA. “They’ve gotten rave reviews. They’re such awesome, unique trails, and they’re so fun because they’re designed in a way that you can just ride out there all day, sessioning and doing different stuff. It’s been super popular because of the unique nature of the trails, having fortified berms, large jumping features, and wood features.”

Because the trails are located on land owned by the City of Madras and other private entities, wood and concrete features are allowed to be built in the system. That is not the case on most other trails in Central Oregon, which are mostly located on federal land, including the Deschutes and Ochoco national forests and the Bureau of Land Management.

“A lot of our trails in COTA are on Forest Service and BLM land, which really limits the scope of what can be built,” Morrow said. “But as we move to land that cities or private entities own, we end up with the freedom to build a better system. The Forest Service just has different parameters on what can be built. We’ve had total support from the city (of Madras). They’ve been hugely helpful in developing this.”

While many trails near Bend have free-ride features, most of them must be built within the natural surroundings, such as rocks, logs and trees. The plethora of man-made features at Madras East Hills makes it unique to Central Oregon.

“Madras is a pioneer in so many ways with this trail system,” Morrow said. “It’s already created a bunch of revenue for the town. It’s put us on the map. On the weekends, the trailhead is packed out. And that’s maybe 10% locals. People travel here to ride the trails.”

I made the hourlong drive from Bend to Madras on a windy Sunday, and met up with friends Mark Johnson and Andrew Williams, also both from Bend.

We started out on the West Side Trail, one of the longer trails in the system, which led us to the west side of the network through a treeless area, the wind ripping into our faces. Before long we arrived at a ridgetop, then descended a series of concrete berms and jumps.

The trail then led us back east across the flats to the east side of the system. There we pedaled up a challenging climb and arrived at the top of another ridge, where multiple trail options were available.

We sampled a few different trails, including White Buffalo and Quarantine, both of which include a series of freeride features and lead back to the main trailhead via the Bridge to Nowhere trail. This trail included a wood bridge, paver rollers and a large table-top jump.

After one more lap we we were ready to head back, having ridden nearly 10 miles in just under two hours. Even though Madras East Hills is built with a downhill, freeride experience in mind, we still managed to climb nearly 1,000 feet during the ride.

For some riders at Madras East Hills, the climbing is less of a chore, as the area is open to electric bikes. While E-bikes are prohibited on most national forest and BLM land, they are allowed on the network near Madras.

“We want to be a space that everybody can come ride,” Morrow said. “E-bikes being a growing category, with some debate going on, what we did was we designed the trail with E-bikes in mind, for both types of riders. It opens up opportunity for those who might have physical limitations, but still want to experience mountain biking.”

Morrow said the plan is to eventually link the Madras East Hills system to trails in the Crooked River National Grassland to the east, including the Gray Butte area near Smith Rock and trails near Prineville and the Ochoco Mountains.

“We want to build trails moving that direction over the next five to 10 years,” Morrow said. “We want to connect it to a greater trail system that really interlinks our awesome terrain and beautiful scenery. We have a team at COTA working on that through the Ochoco Trails group.”

While Madras East Hills is an ideal winter and spring option, when many trails near Bend remain snowy or muddy, Morrow said the trails near Madras remain rideable year-round.

“They stay pretty good throughout the summer, surprisingly,” he said. “Here in Madras, we have a clay-based soil. So during the summer months when things turn into a dustbowl in Bend, our trails are packed down pretty nice. There are some soft spots, but we’ve been fortifying those with rock armor.”

The first race at Madras East Hills is the Bone Crusher XCO, featuring a 4-mile lap course and scheduled for April 17. Categories are available for all age groups as well as E-bikes.

What were you thinking??? Mountain biking and trail-building destroy wildlife habitat! Mountain biking is environmentally, socially, and medically destructive! There is no good reason to allow bicycles on any unpaved trail!

Bicycles should not be allowed in any natural area. They are inanimate objects and have no rights. There is also no right to mountain bike. That was settled in federal court in 1996.