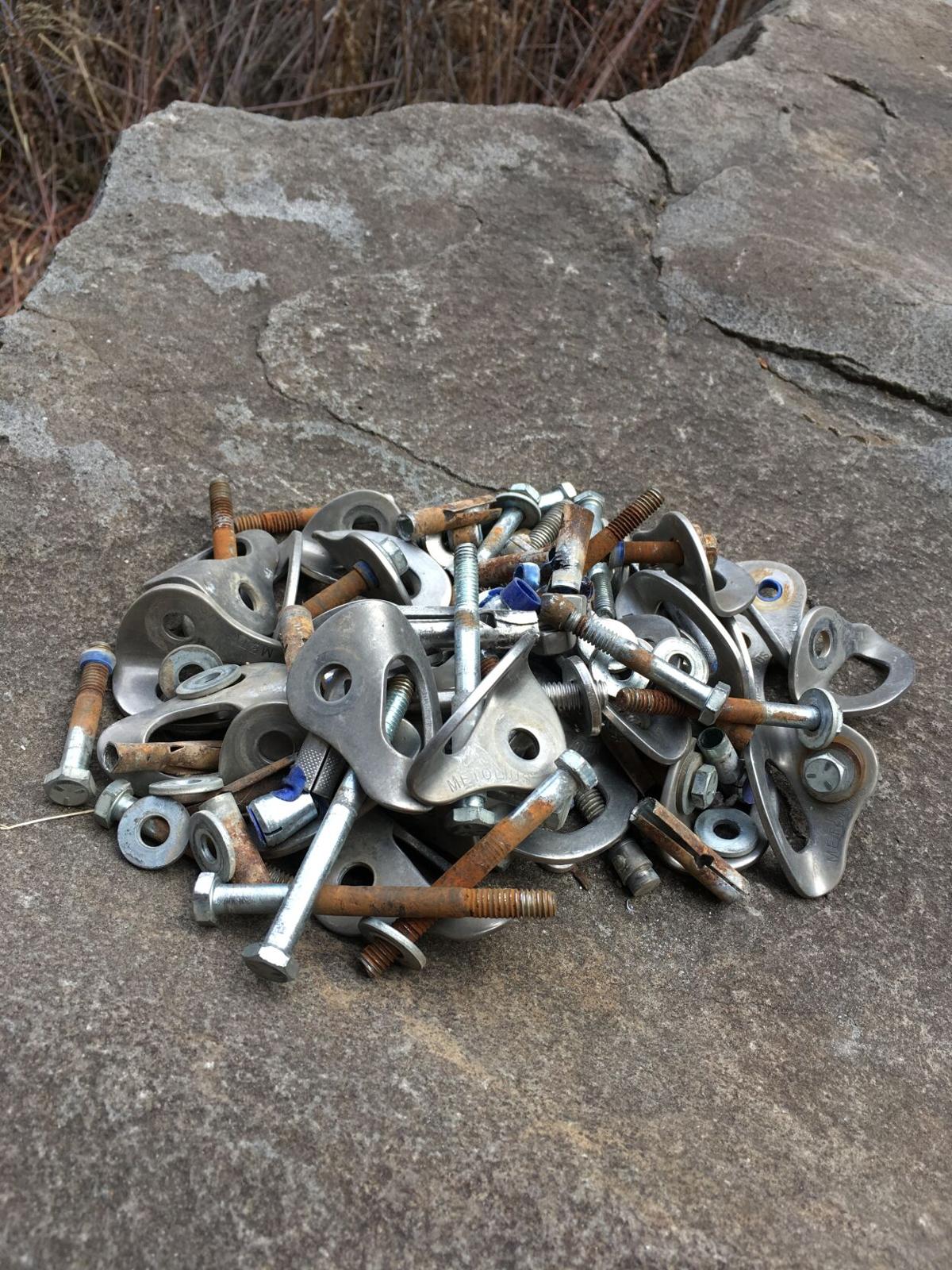 This pile of old bolts and hangers is a typical haul after a day’s work of replacing hardware at Smith Rock State Park. These bolts are heavy to carry in and out of the climbing areas. 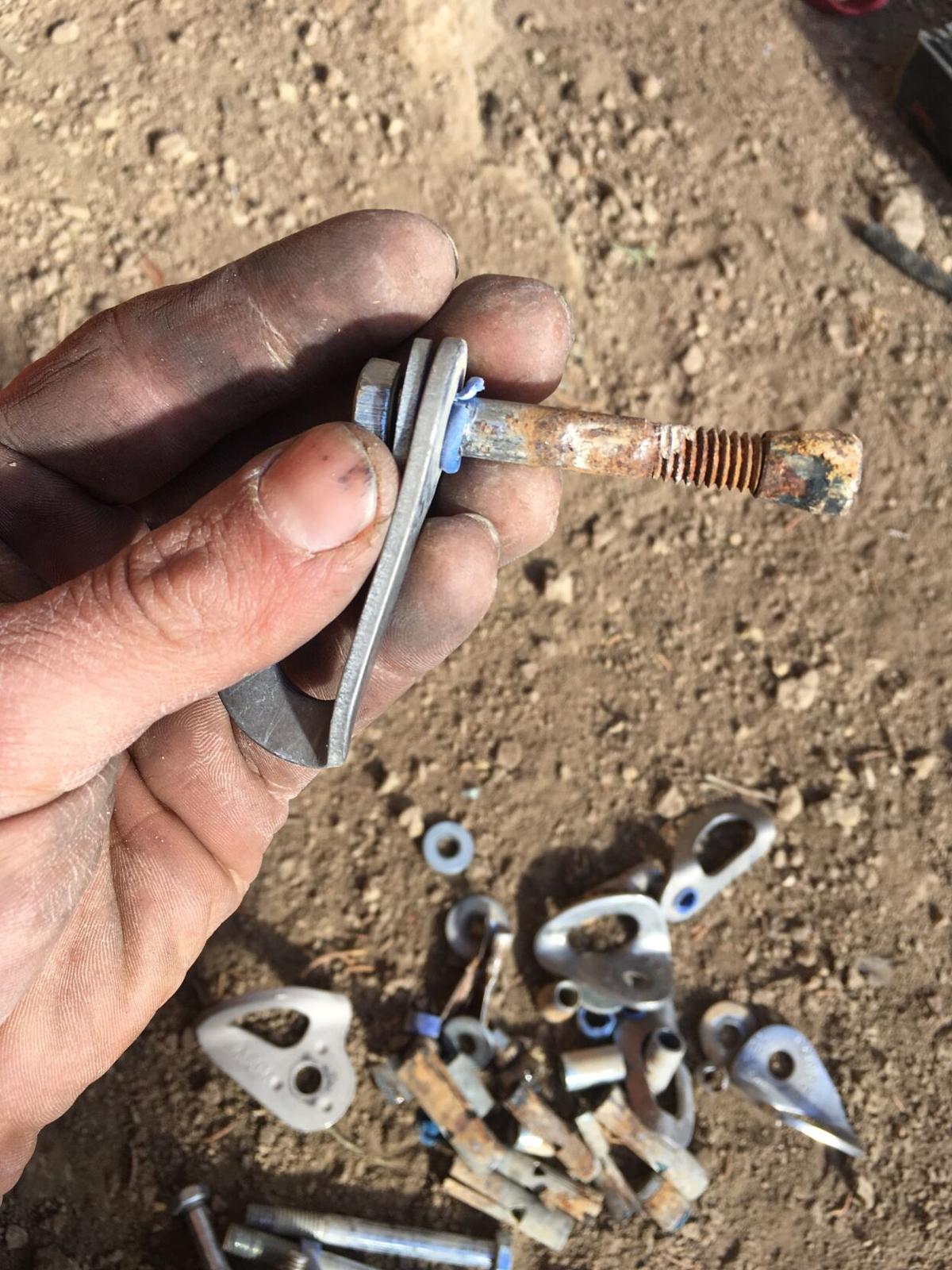 The single bolt shows corrosion at its base.

This pile of old bolts and hangers is a typical haul after a day’s work of replacing hardware at Smith Rock State Park. These bolts are heavy to carry in and out of the climbing areas.

The single bolt shows corrosion at its base.

One of the most common questions climbers get from other visitors at Smith Rock State Park is “How do you get the rope up there?” We climb up and hang the rope, of course! But it’s not as simple as it sounds.

Two broad categories characterize climbing routes on ropes, traditional and sport. The first of the two, traditional, requires placing hardware in existing cracks or other features of the rock as you use the rock itself to grab with your hands and step on with your feet. The hardware protects climbers from a long fall and is removed either by another climber or by the climber that placed it on their way back down to the ground.

The second type of climbing, sport, has bolts with hangers on them installed in the rock that a climber then clips gear into and then their rope while also using the rock for hand and foot holds.

In most places, both types of climbs have an anchor at the top which consists of two bolts with additional hardware for the climber to clip their rope into and then lower from. Other climbers can then use that rope to climb up and lower down also.

Both of these types of climbing are widely accepted by climbers and land managers as standard practice. Depending on the type of rock and its features, a climb may either be established as traditional or sport. Central Oregon has both styles but the majority of climbs are sport climbs.

The person who first establishes the route generally places the hardware themselves.

All hardware deteriorates after being exposed to elements such as wind, sand and water over time. Some environments are more harsh on the metals than others.

The amount of traffic a specific climb gets can also determine how quickly hardware degrades. On average, the hardware should be replaced about every 30 years. It is important for the safety of all climbers that hardware be replaced before it ages or corrodes to the point of failure.

Everyone who climbs in Central Oregon benefits from the placement of this hardware. However, only a select few climbers put in the effort to replace it.

Part of the reason for this is that it takes specific knowledge and skills to replace hardware. Not to mention it takes time and energy. Still, hardware replacement is a grassroots effort and done completely on a volunteer basis. These people provide a huge benefit to the climbing community, but their efforts often go unnoticed and unappreciated.

Max Tepfer, who learned to climb 20 years ago in Central Oregon, is one of those volunteers.

He points out that “staying ahead of hardware replacement is important for safety, but also allows us to do it in a more sustainable manner. If we wait too long, the bolts corrode to the point that they can’t be easily removed. When this happens, the old hole can’t be reused and we have to drill a new one.”

When considering the hundreds of routes at Smith Rock, replacing bolts and anchors can seem like a daunting task. The climbers that replace hardware prioritize bolts by the most urgent need; otherwise, they go by age which they can tell by the type of hardware used.

Max adds that climbers should always be on the lookout for bolts that need replacement. He says, “the most urgent bolts will wiggle in their hole despite any effort to tighten them with a wrench.”

If you’re a climber, you can report a bad bolt to the High Desert Climbers Alliance through their website www.highdesert.rocks. Click on the menu link “Report Bad Hardware.”

Despite this being hard work and time -consuming, Max says he “enjoys the process of it and it’s very satisfying to use my free time to better a place that has been a transformative part of my life.”

He adds that it allows him to help pass the opportunities climbing has offered him to the next generation. Max points out that, “Our climbing areas are where our community forms and gathers. Climbing bolts and anchors are at the foundations of those climbing areas.”