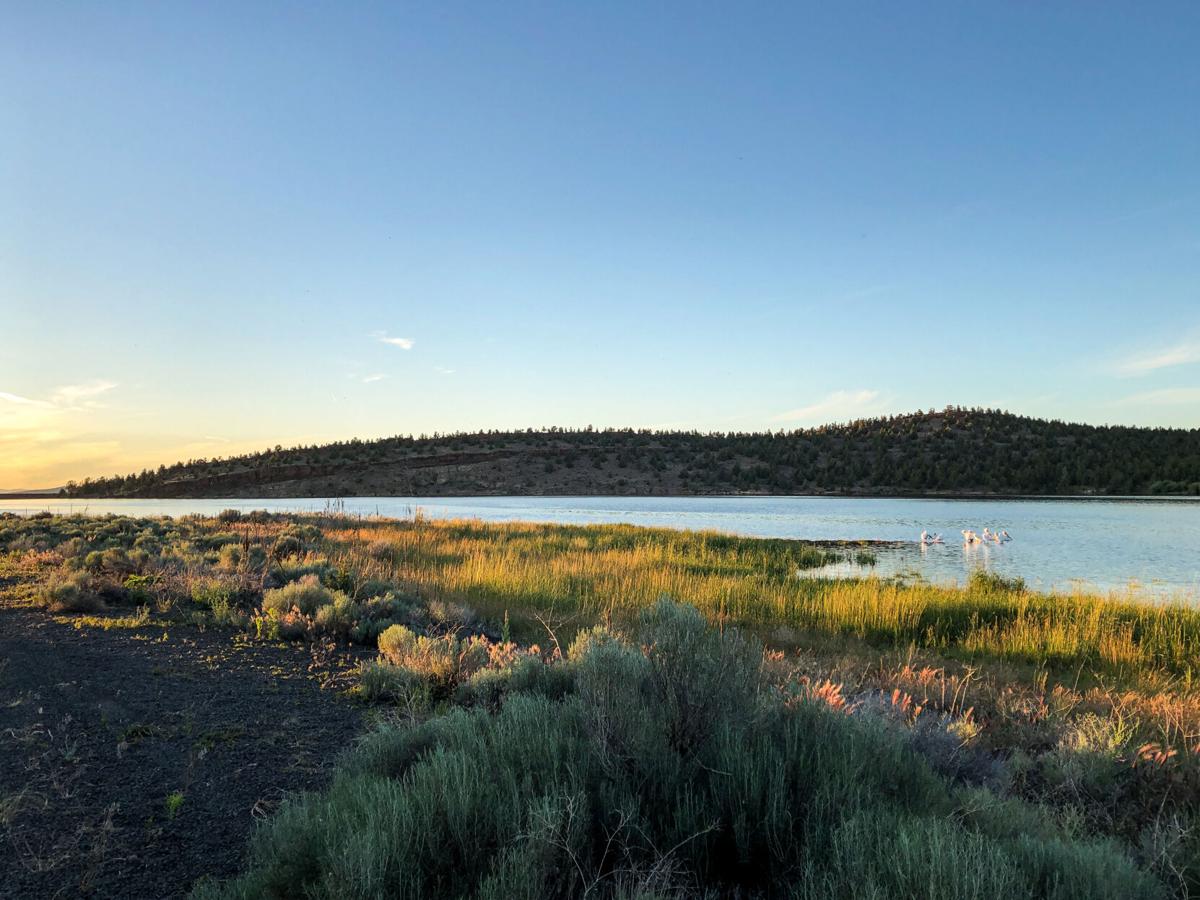 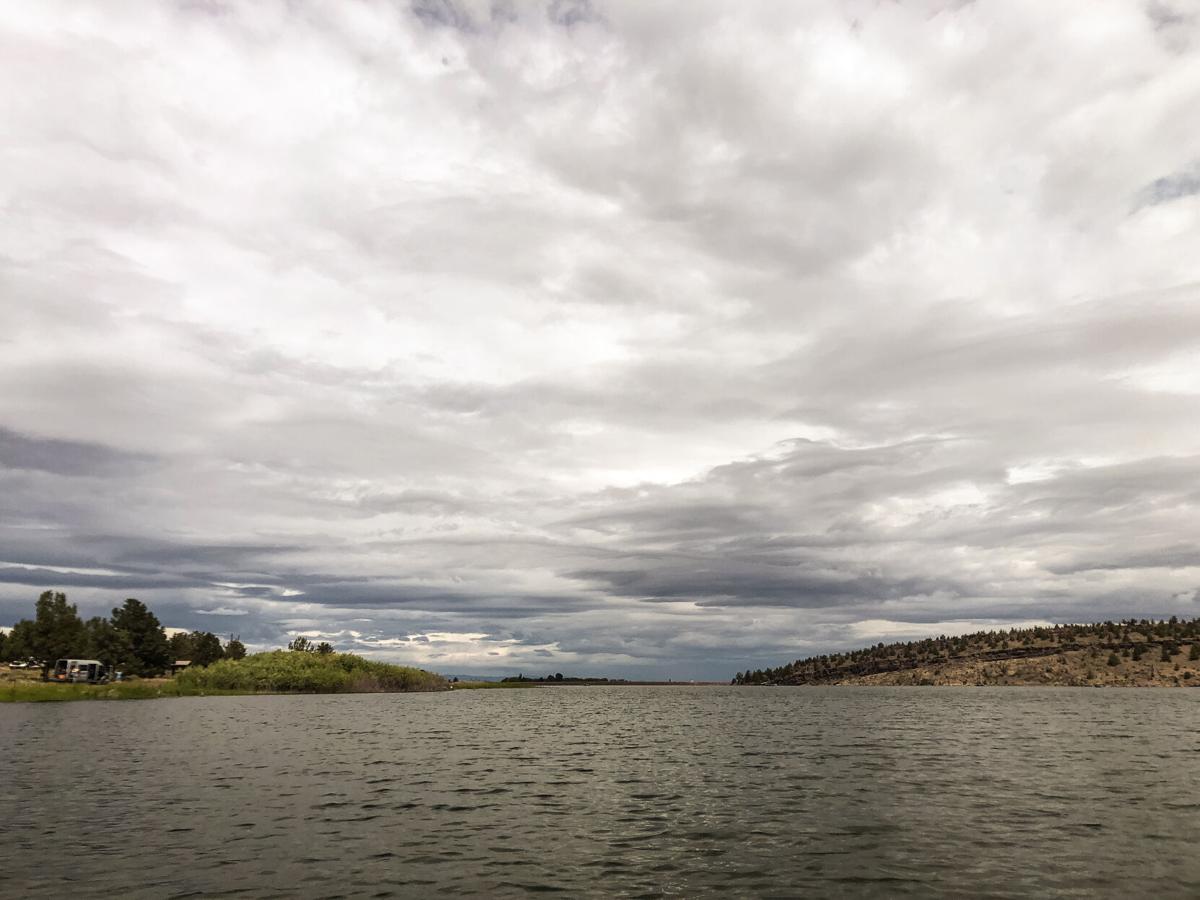 On an overcast morning looking west from a kayak in Haystack Reservoir. 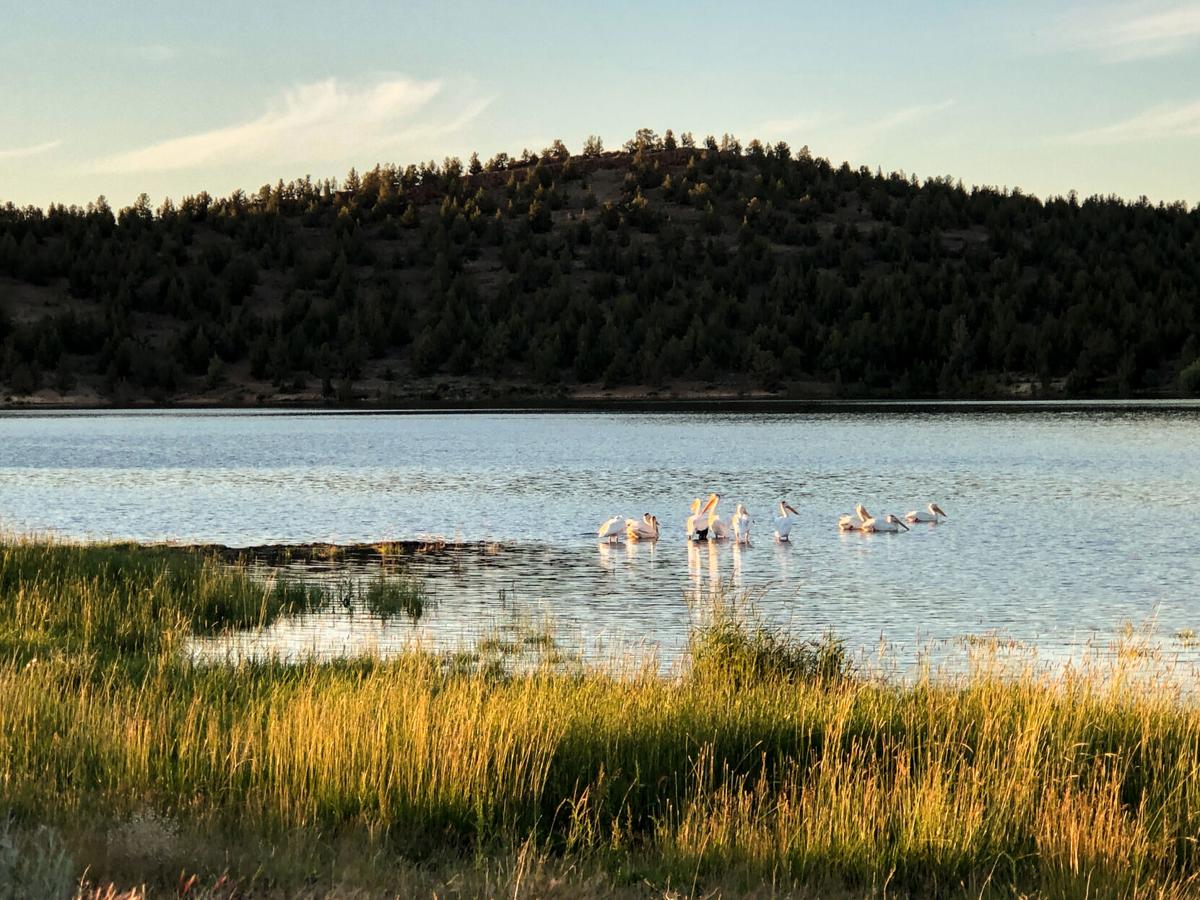 A flock of American white pelicans wade on the marshy shore near the Haystack South Shore Group Campground at Haystack Reservoir. 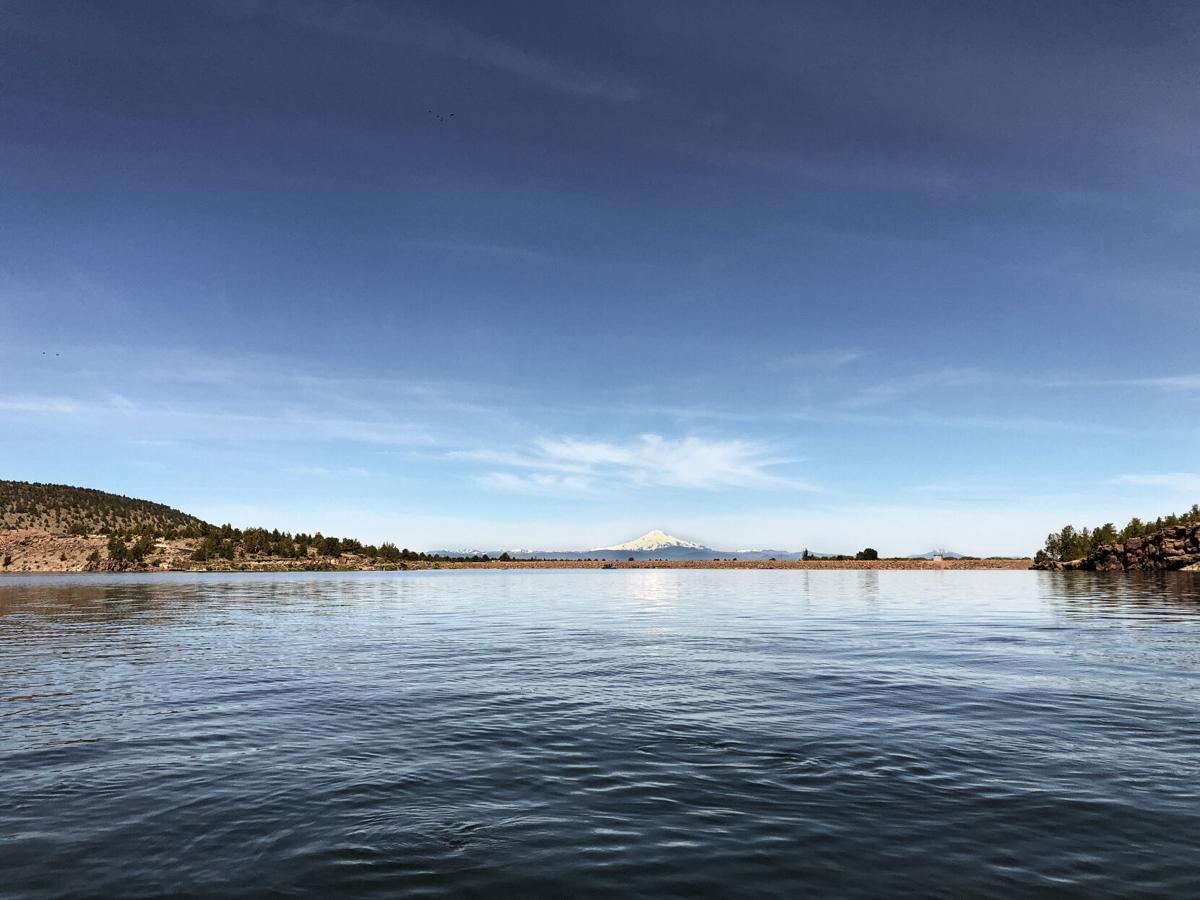 A view from the middle of Haystack Reservoir looking west towards the earthen dam with Mt. Jefferson centered above it. 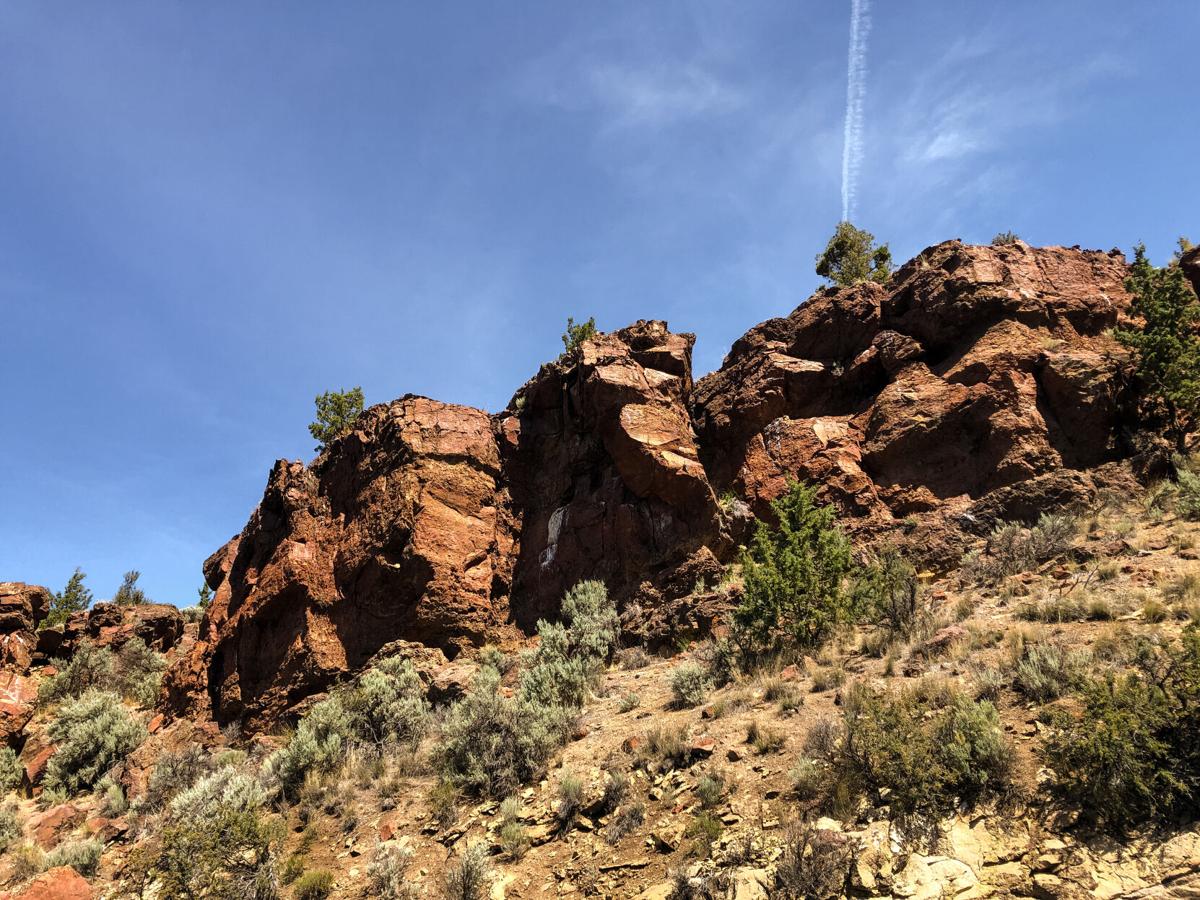 Reddish rock faces like these are highlighted along the northeastern bank of Haystack Reservoir near the dam. 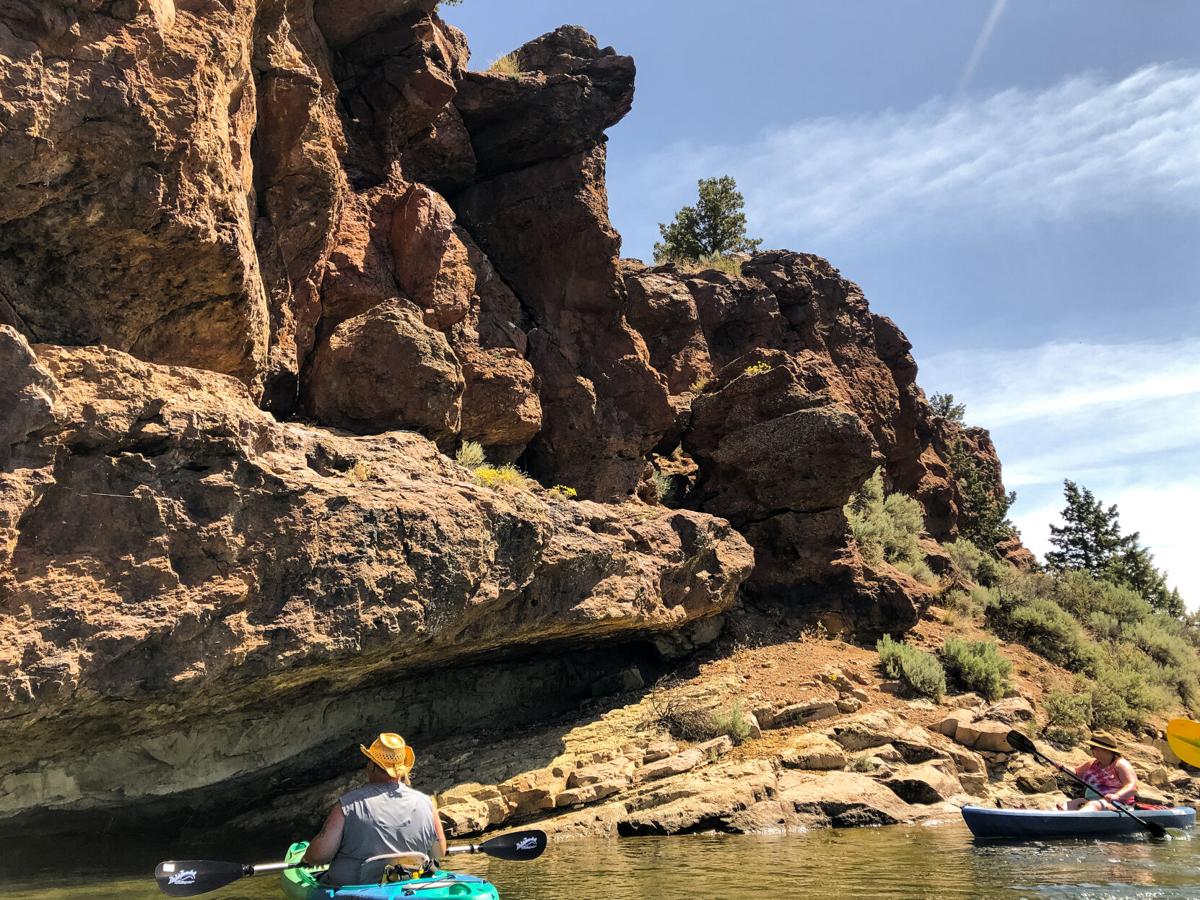 A group of kayakers inspect the rock cutout at the Haystack Reservoir’s northeastern shore line. 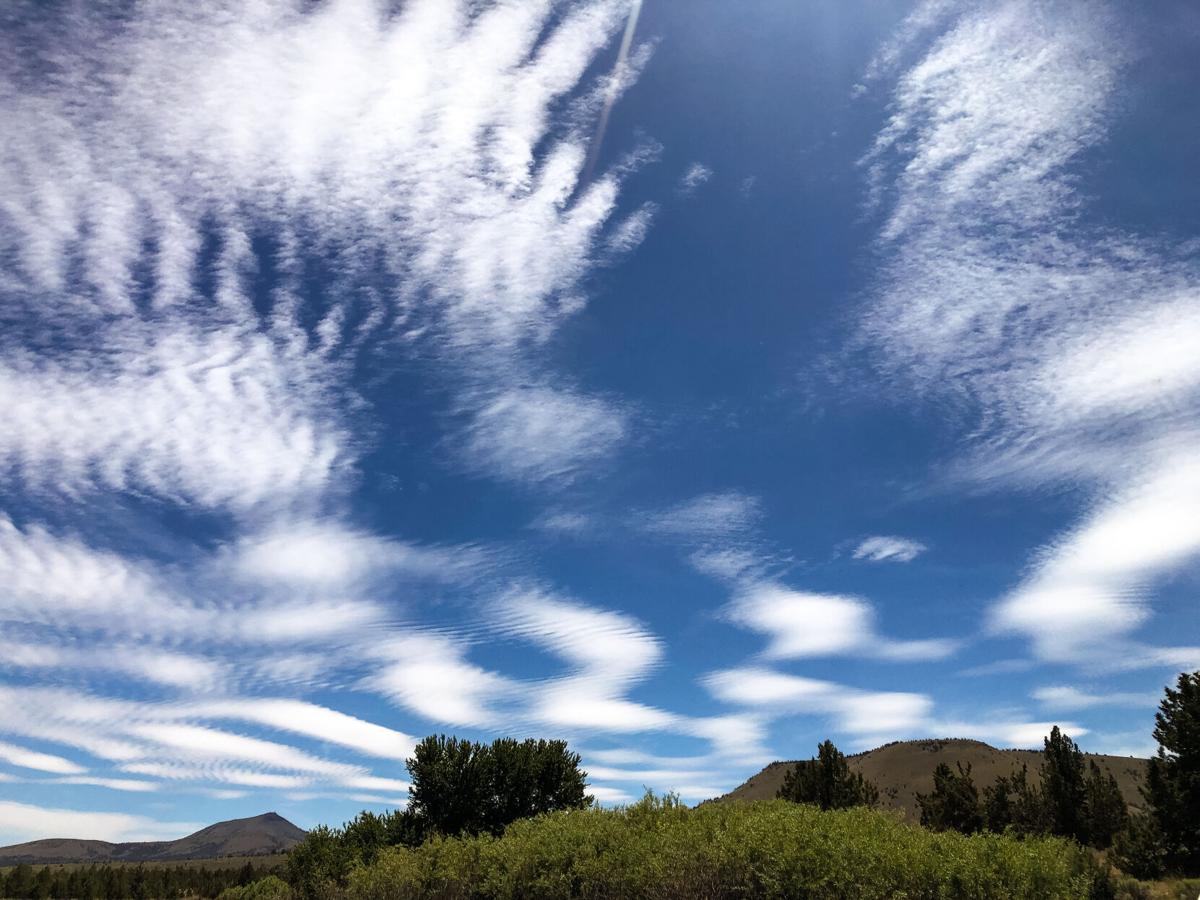 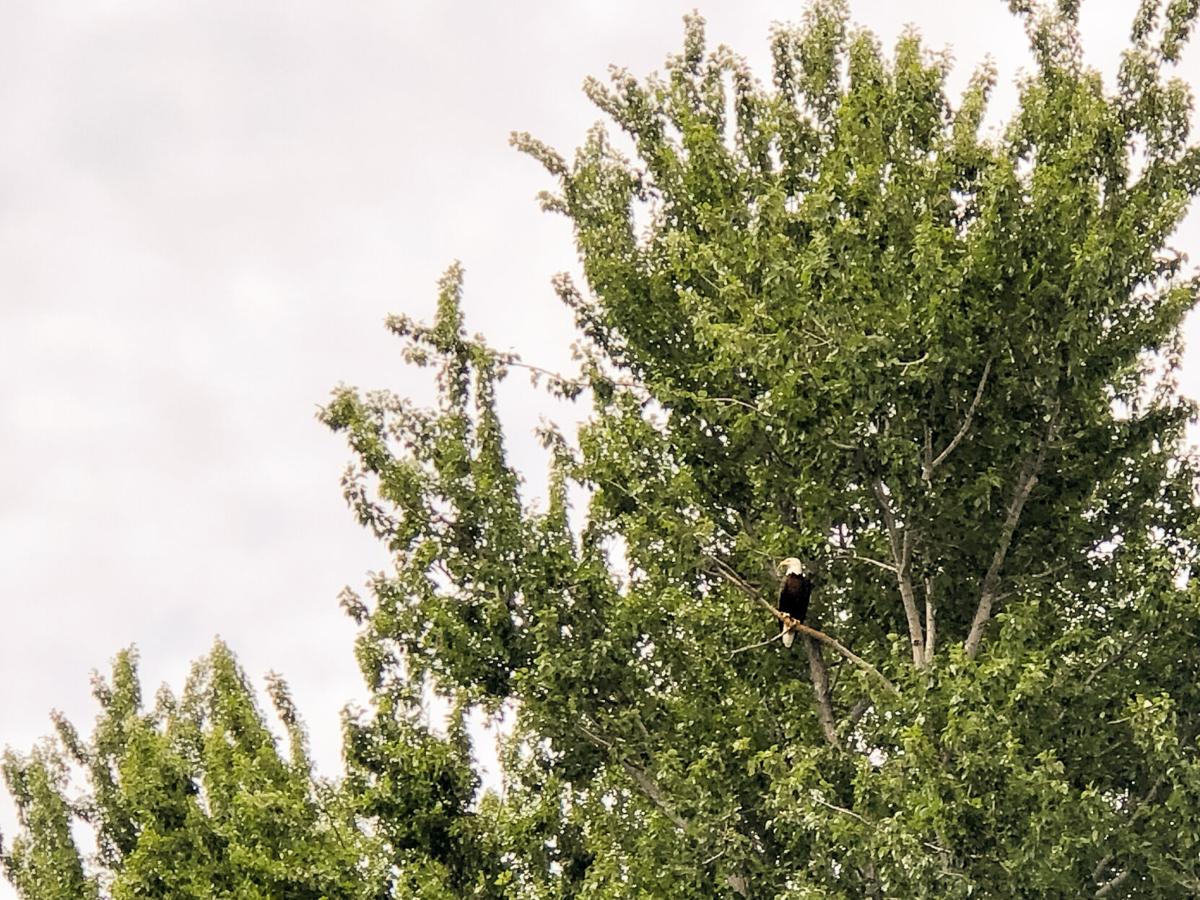 A bald eagle sits in a cottonwood tree on the southern shore of Haystack Reservoir. 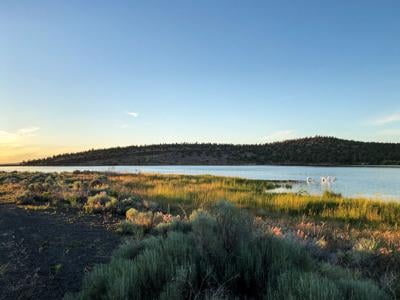 On an overcast morning looking west from a kayak in Haystack Reservoir.

Reddish rock faces like these are highlighted along the northeastern bank of Haystack Reservoir near the dam.

A bald eagle sits in a cottonwood tree on the southern shore of Haystack Reservoir.

While Haystack Reservoir is not hard to find, sitting just 20 miles north of Redmond and only a couple of miles east of U.S. Highway 97, it can be often overlooked for its neighboring reservoir Lake Billy Chinook to the west.

The lake however is an unexpected surprise among farms and sparsely populated hillsides of juniper trees.

It’s surrounded by Haystack Butte (which is where the reservoir gets its name), Gray Butte and other hills to the north, south and east, and there’s nearly a perfect view west over its dam, clear enough to see Mt. Jefferson and Three Fingered Jack in the distance.

The reservoir was created in 1957 when an earthen dam was built, effectively blocking water from the nearby North Unit Main Canal, which provides water to nearly 59,000 acres in Jefferson County. The water travels approximately 72 miles from its source at Wickiup Reservoir in the Cascade Lakes and is held in the 5,600 acre-foot Haystack Reservoir north of Redmond.

It’s not as large as similar reservoirs in the area, but it does feature some nice geological features, a variety of birds to observe, ample fishing opportunities and smooth waters to paddle around in and watch the sunset over the mountains.

There are three campgrounds at Haystack Reservoir, each one providing a different perspective.

Coming from the northwest is the first camping area, Haystack West Shore Campground and Day Use Area.

The site is the closest to the dam for both overnight and day-use visitors. Since the lake is a Bureau of Reclamation site, it is managed by Crook County instead of the U.S. Forest Service.

The campground has 14 standard campsites, one of which is fully ADA accessible.

The second space to bed down for the night is the South Shore Group Site. It is also managed by the county.

There are three different camping spots within the group camp, each of them are easily able to hold around 50 people with lots of open space to pitch a tent and long driveways to park an RV or other rig.

The campsite is almost tucked away in the southern corner of the lake, bordered on one side by towering cottonwoods, juniper stands on the other and both marshy and rocky lakeshores, depending on which site you’re at.

The group site has no running water, but water jugs can be filled at either of the other two campgrounds.

The third and final campground at the lake is also the most developed according to the Ochoco National Forest and Crooked River National Grasslands website.

The Haystack Reservoir Campground and Day Use Area features 24 standard campsites and can accommodate RVs up to 32 feet in length. There are also small pavilions available to rent for the day, horseshoe pits and a boat ramp to get out on the lake. This is also probably the campground with the best view.

Shaded by a small thicket of trees, the campground overlooks the water and faces west where there’s a stunning view of the Cascades over the lake.

Wherever you decide to rest for the night, camping out at Haystack Reservoir offers a clear night sky with little light pollution perfect for stargazing and for stories by the campfire.

Take me to the water

Haystack is well-known by fishermen for many fish that swim through the lake. It is stocked with both cold- and warm -water fish making it all the more thrilling when you feel the pull on your line. According to the Oregon Department of Fish and Wildlife website, the lake includes rainbow trout, kokanee, largemouth bass, black crappie and bluegill with the rocky area by the dam a good spot for bass and panfish.

The fish hatcheries will also occasionally stock brood rainbow trout, fish that have outgrown their use for hatchery operations, in the lake. These fish can well exceed 10 pounds when caught.

The lake is often dotted with small fishing boats on any given day, but it is also a great place to paddle in a kayak, canoe or stand -up paddleboard.

Haystack Reservoir is a no-wake lake, meaning that motorized boats must stay under 5 mph while on the lake.

The wind can often whip through the buttes here, creating fairly choppy water conditions when you’re in a nonmotorized craft.

But the mornings are usually calm and serene across the lake. Taking an early paddle can lead you to not only the hungry fish but also to fascinating bird -watching displays.

It is not uncommon to see birds of prey at Central Oregon lakes, but the smaller size of Haystack Reservoir may be one of the reasons that the bird population here is so much more active to watch. Mornings and afternoons you can often spot a group of osprey diving into the murky waters to bring up a fish. And if you’re lucky, you may even spot one of the resident bald eagles that live in the large cottonwood trees on the south shore of the lake.

A morning paddle over to the thicket can bring you to the cacophonous birds as they squawk and chirp at each other for their morning meal. It should be noted that bald eagles sound nothing like they do in the movies (most of the time that is the call of a red-tailed hawk).

Most surprising on a recent visit to the lake was the flock of American white pelicans that floated around that more marshy southern shore. I am used to seeing the large shorebirds in places like Malheur or Klamath lakes, but I have never seen one in Central Oregon before.

Other birds to look out for are the common Canada goose and great blue herons.

During the majority of the year, the lake is a peaceful setting to float around and cast a line, but for one weekend a year, the speed limit goes out the window and the lake roars with activity.

Usually scheduled for the latter part of August the Columbia Drag Boat Association hosts a weekend of drag boat races on the lake.

This year’s event was scheduled for Aug. 22 and 23 but has been canceled due to COVID-19 restrictions.

For the rest of the year, the lake is calm and full of life. It should not be forgotten that the lake is a reservoir and water levels can fluctuate from day to day based on the water use of the nearby verdant farms that create a stark contrast to the drab brown hills that surround the lake.

No matter the time of year, it’s always great on a lake, and Haystack Reservoir is a nice change of pace.