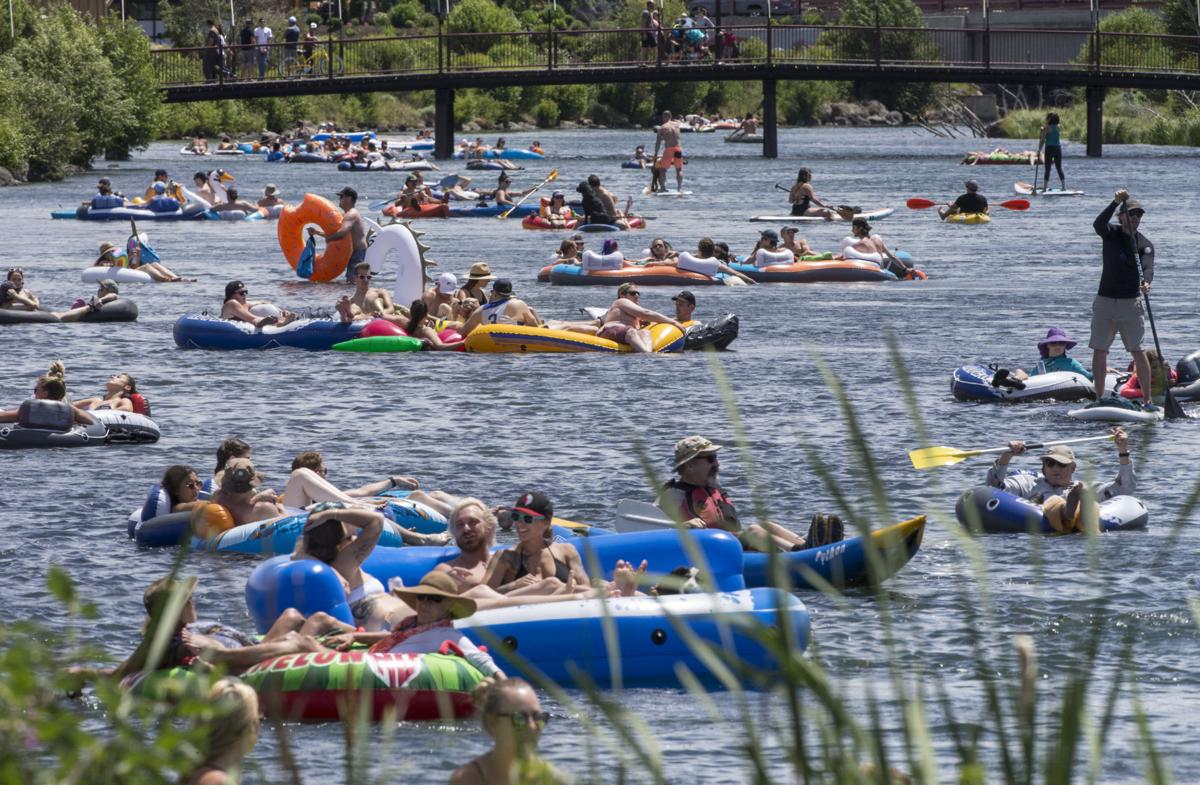 Dozens of rivergoers float down the Deschutes River on Saturday near the Old Mill District in Bend. 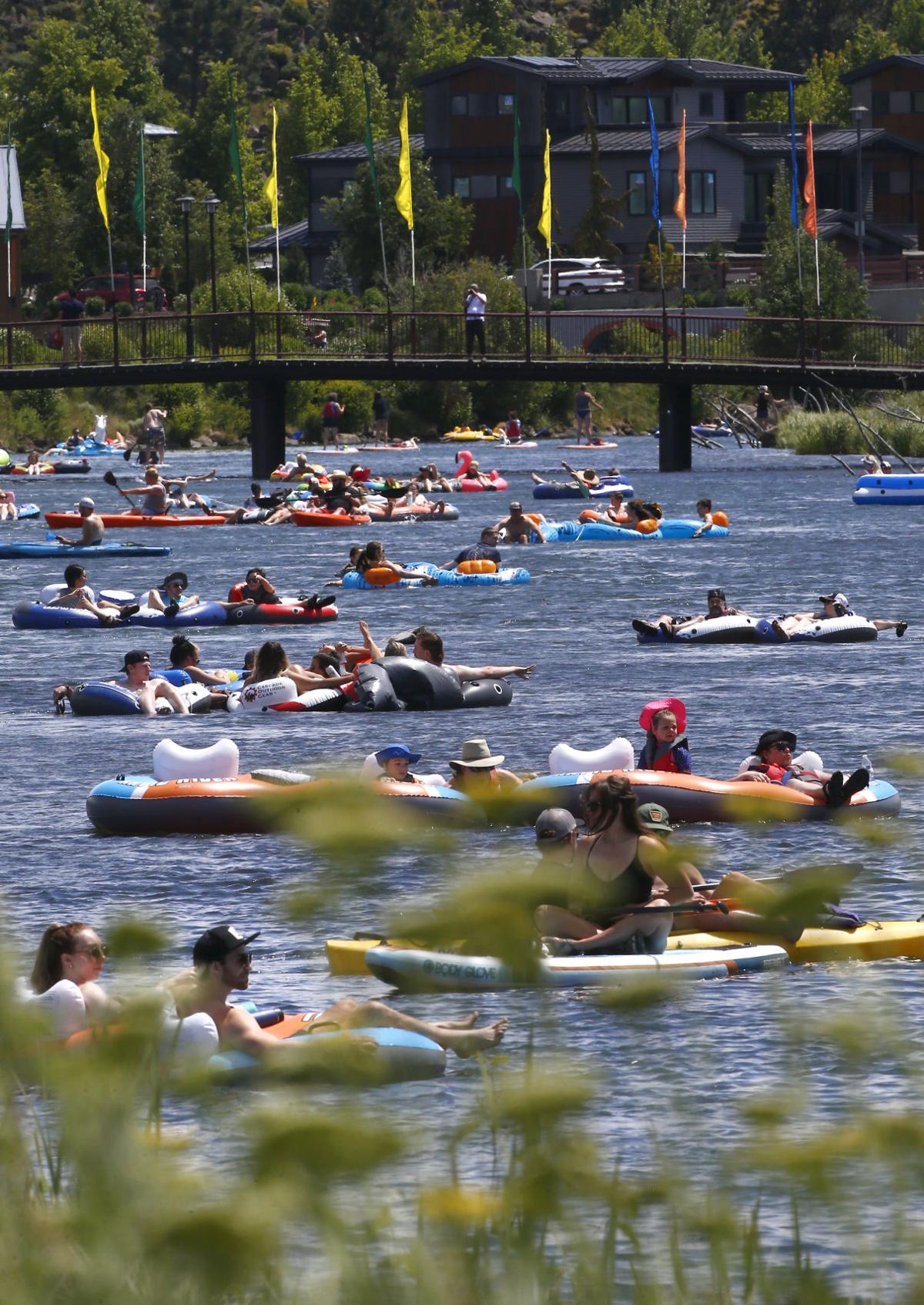 Dozens of river goers float down the Deschutes River near the Old Mill District in Bend on Saturday, June 27, 2020. 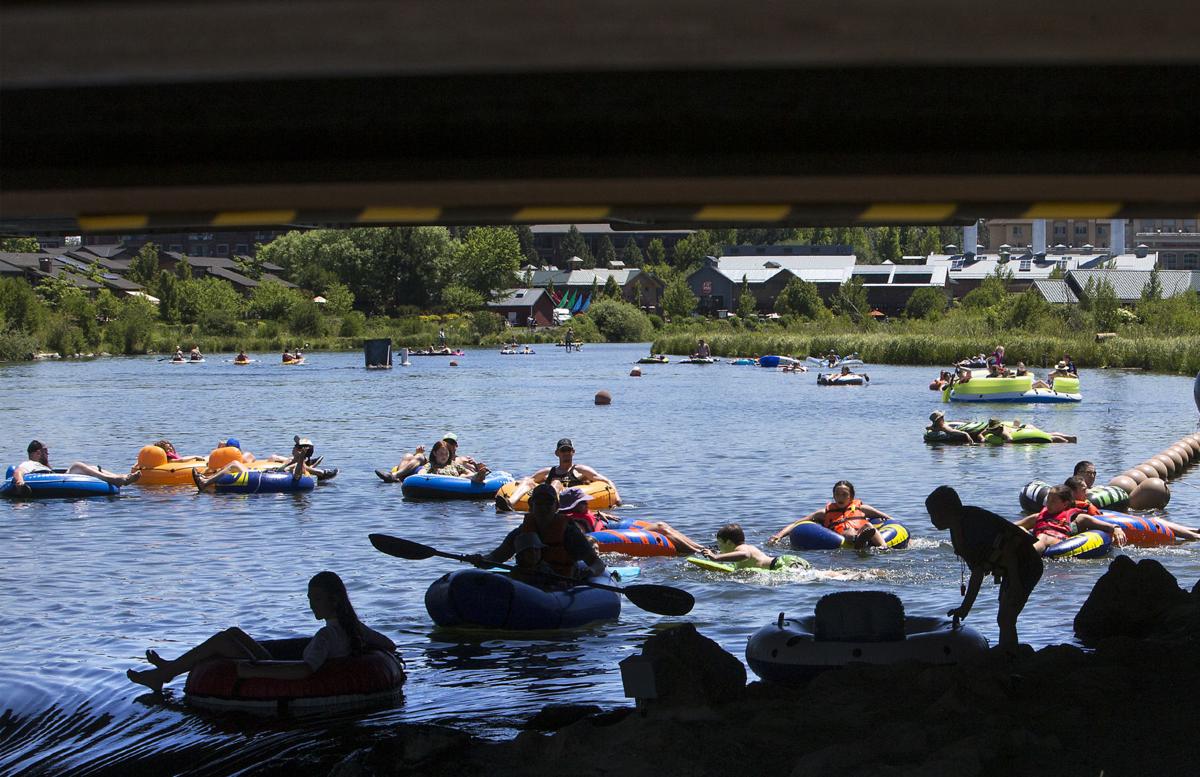 Floaters make their way down the Deschutes River towards the Bend Whitewater Park on Friday, June 26, 2020. 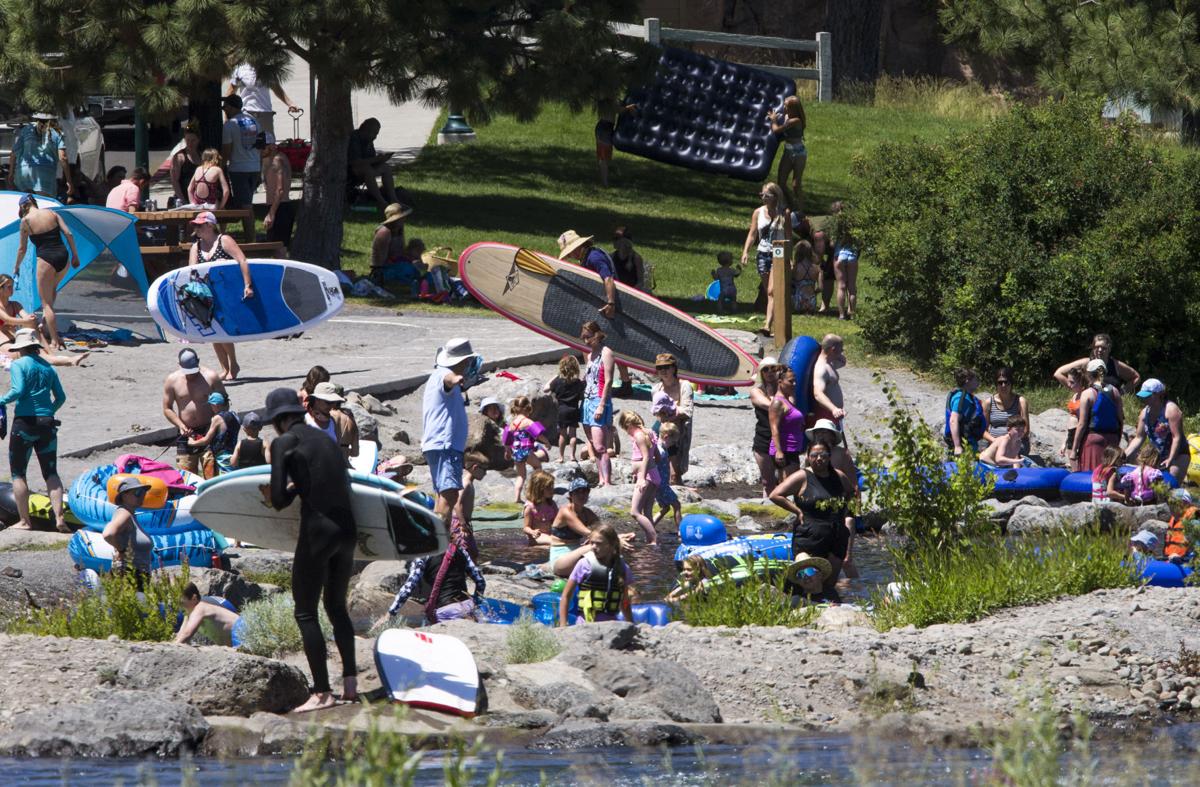 Visitors fill the beach area Friday at McKay Park while spending the afternoon cooling off at the Bend Whitewater Park.

Dozens of rivergoers float down the Deschutes River on Saturday near the Old Mill District in Bend.

Dozens of river goers float down the Deschutes River near the Old Mill District in Bend on Saturday, June 27, 2020.

Floaters make their way down the Deschutes River towards the Bend Whitewater Park on Friday, June 26, 2020.

Visitors fill the beach area Friday at McKay Park while spending the afternoon cooling off at the Bend Whitewater Park.

Carrie Dotterer stood watch over eight inner tubes on the rocky access beach in Riverbend Park on Saturday while her sister and her friends stepped away for a few minutes.

She wasn’t wearing a mask.

Dotterer, 21, had flown into the area from Ohio the day before. Visiting her sister, who’d just moved to Central Oregon, and planning to float the river, she said she wasn’t too worried about the coronavirus pandemic.

“I didn’t really think about it, to be honest,” Dotterer said. “I definitely care about it, but at some point, you just gotta trust in everything. God has a plan for it.”

Dotterer was one of many people who’d come to float, paddle and raft down the Deschutes River during one of the warmest weekends of the summer so far.

In spite of a world changed by stay-home orders, mask recommendations and social distancing requirements, tourists and locals still made their way to Bend’s parks to escape their quarantines.

Some wore masks, at least in the parking lot. But at the river’s edge, the masks came off.

As of Saturday, COVID-19 had killed nearly half a million people worldwide, including 202 in Oregon, according to Johns Hopkins University and the Oregon Health Authority.

A few yards away from Dotterer, around a half-dozen middle school-aged children wandered toward the river with inner tubes, an inflatable sunflower and an air mattress. They wandered between several groups of visitors, all without masks on.

On the grass, Victoria Birdsong, 37, was preparing her tandem kayak to float with her husband, Jonathan Thompson, 38. The two had traveled from Vancouver, Washington, to celebrate Thompson’s birthday.

Neither wore a mask, but said they had brought them in a backpack.

“We knew Oregon is opening up for Phase 2 so we kind of checked it out,” Birdsong said. “There’s ways to keep your distance. Even in crowded situations, there’s ways to maintain that 6 feet.”

The pair weren’t too concerned about keeping that distance .

They weren’t alone — there were more kayaks and fewer inner tubes on the water than during previous summers, likely because of the rental options available. Tumalo Creek Kayak & Canoe, the outfit which normally rents river gear to visitors, isn’t renting its usual orange tubes this summer.

Aaron Duart, 17 and part of Tumalo Creek’s rental staff working the tent at Riverbend Park, said the partly cloudy Saturday was relatively busy on the river for this season, but less so than in the previous summers he’s worked.

“There’s days like today where a lot of people are wearing masks (when they come to the company’s rental booth), and other days where people don’t seem to care,” said Duart, who wore a mask as he greeted customers.

The company has changed how it operates too, limiting group sizes, requiring reservations and spacing out when they send groups to the river. According to rentals manager Clayton Kellogg, the company has had to reduce its staff significantly this year and work to avoid the 30-person-long lines seen in previous years.

What’s more, the Ride the River shuttle has been shuttered for the 2020 season, drinking fountains have been turned off and the Bend Park & Recreation District has included social distancing recommendations on its signage near river entry and exit points.

While experts and government authorities recommend against traveling during the pandemic to reduce the risk of catching or carrying the virus, Bend’s river activities remained a destination for travelers Saturday.

On the way to northern Idaho from their home in Redwood City, California, Noah Campbell, 41, and his family spent part of Saturday paddleboarding the river. According to Campbell, the family’s safety measures include keeping a healthy immune system, maintaining distance from others and wearing a mask in public — though Campbell noted he’d forgotten his mask in the car while sitting in the grass.

“Our concerns are we don’t want to spread it to other people,” Campbell said.

His daughter Sierra, 14, chimed in, “We want to respect other people.”

For Jordan Wardlaw, 39, and his family, a swing through Northern California and Central Oregon was the alternative to a longer road trip from their home in Santa Rosa, California. The family’s original plan had included a stop in Las Vegas, but they didn’t want to risk transmission of the virus and changed their route instead.

“This was a low-risk way of getting out of Dodge,” Wardlaw said of the visit to Bend.

Wardlaw, one of the very few people wearing a mask at the Bend Whitewater Park at the time he was there, said he felt the beach’s guests were spaced apart far enough to be safe.

“The public here seems a bit lackadaisical,” Wardlaw said, noting that he’d seen many people without masks indoors around town.

There wasn’t much concern about the ability to keep a safe distance on the water for Bend resident Arron Steadman, 37, who said he, too, had left his mask in his car. Steadman wasn’t surprised by the prevalence of out-of-town visitors.

“It’s kind of something I expected, especially with other states not being as relaxed as we are,” he said. “I kind of expected us to be a haven of sorts.”

Clearly these folks are not concerned about contracting Covid-19 from one another, nor anything else from the river water. Lots of organisms naturally live in the water in addition to chemical runoff. Take biology and find out.

Thanks to all the out of towners for bringing the virus to Bend. Wear a mask people.