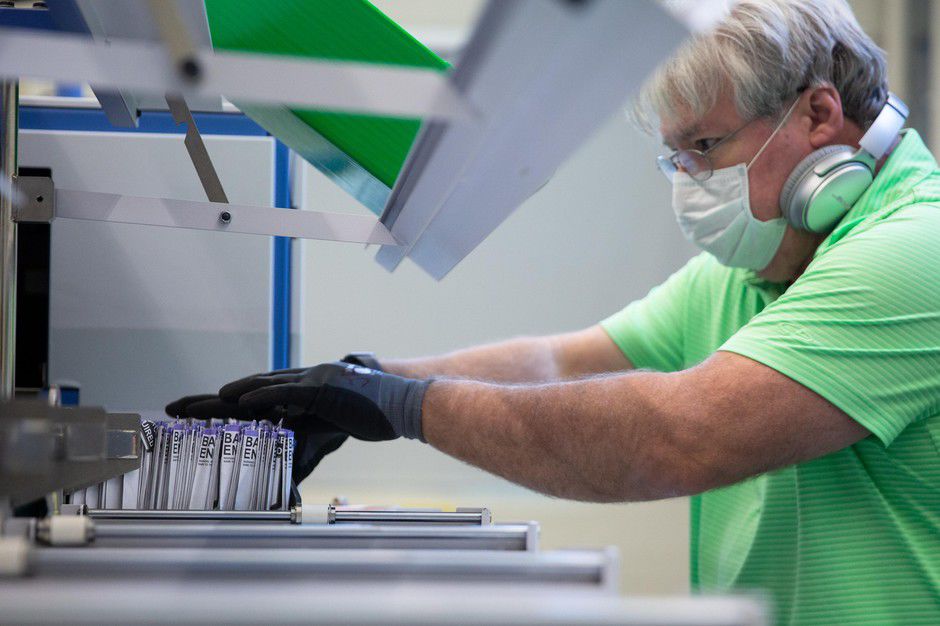 An elections worker sorts ballots at the Multnomah County Elections Division in Portland on Wednesday. Oregon elections officials and experts are confident COVID-19 adjustments will not alter the integrity of the primary. 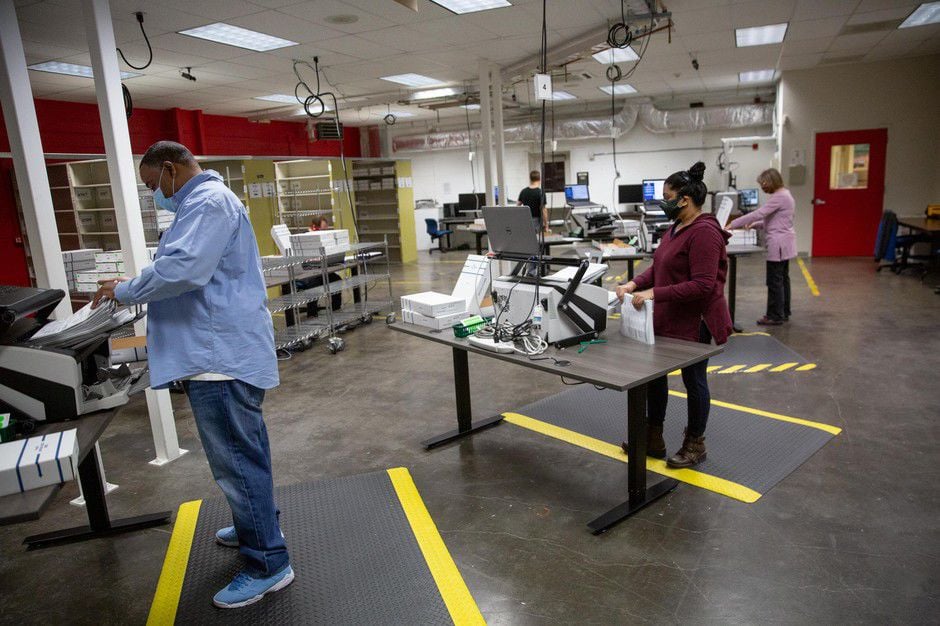 Elections workers process ballots at the Multnomah County Elections Division in Portland on Wednesday. Elections offices are working to keep staff 6 feet apart to slow the spread of COVID-19. 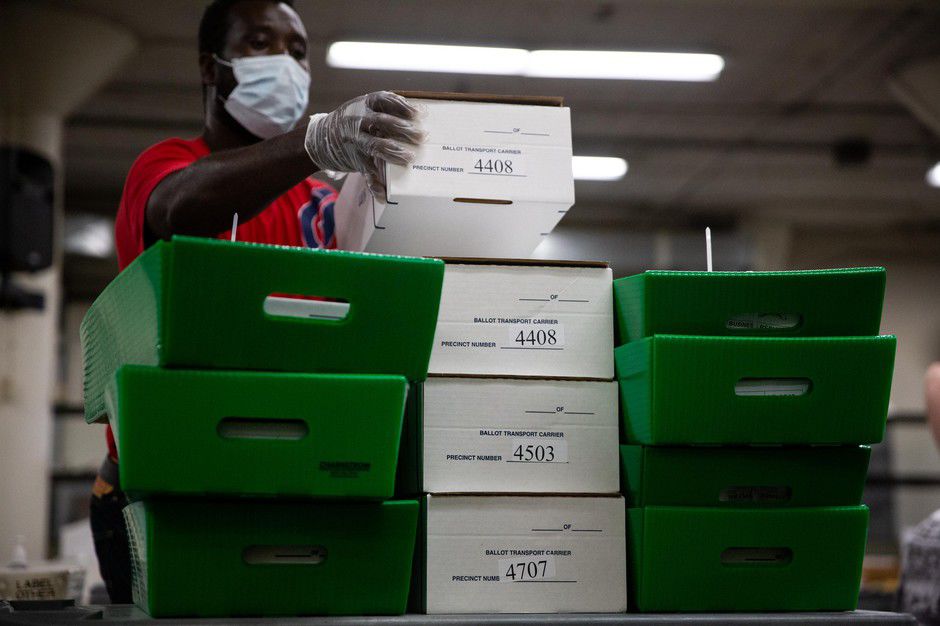 An elections worker loads boxes of ballots onto a cart for transport at the Multnomah County Elections Division on Wednesday. 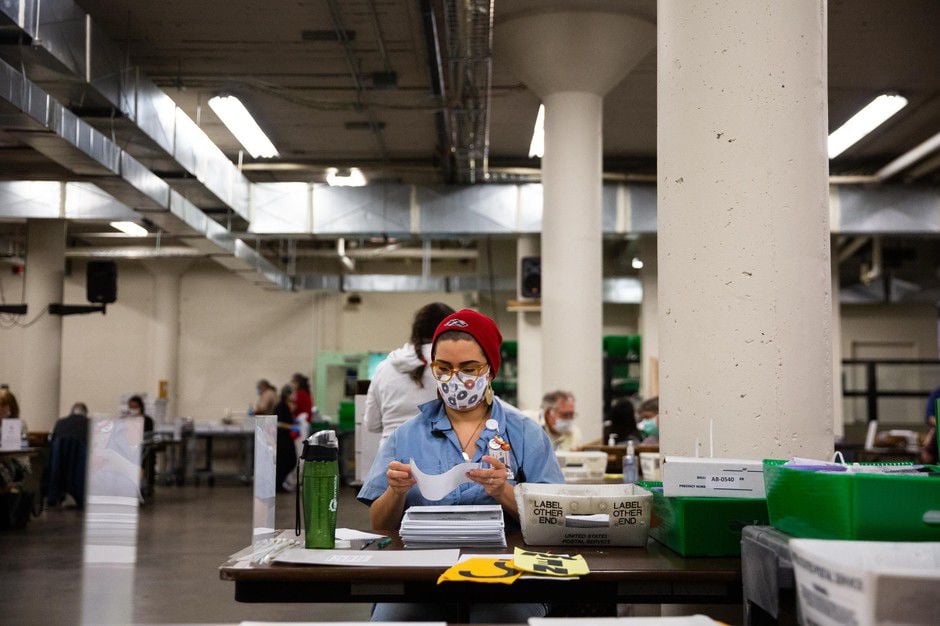 Briana Loughlin opens ballots at the Multnomah County Elections Division in Portland on Wednesday. Loughlin is part of the temporary workforce recruited by elections officials around the state to help process ballots in the run-up to Tuesday’s primary.

An elections worker sorts ballots at the Multnomah County Elections Division in Portland on Wednesday. Oregon elections officials and experts are confident COVID-19 adjustments will not alter the integrity of the primary.

Elections workers process ballots at the Multnomah County Elections Division in Portland on Wednesday. Elections offices are working to keep staff 6 feet apart to slow the spread of COVID-19.

An elections worker loads boxes of ballots onto a cart for transport at the Multnomah County Elections Division on Wednesday.

Briana Loughlin opens ballots at the Multnomah County Elections Division in Portland on Wednesday. Loughlin is part of the temporary workforce recruited by elections officials around the state to help process ballots in the run-up to Tuesday’s primary.

Briana Loughlin normally spends her days working as an assistant at the North Portland branch of the Multnomah County Library. But as a result of the pandemic, she now finds herself opening ballots in the cavernous basement of the county elections headquarters.

“Library workers tend to be kind of methodical, so that kind of helps over here,” said Loughlin, gesturing at the stack of ballots in front of her.

She sits at a table roughly 6 feet away from the closest workers. Dozens of other workers — almost all of them masked — spread out at tables scattered around the room.

Loughlin is part of the temporary workforce recruited by elections officials around the state to help process ballots in Oregon’s statewide primary.

They’re replacing many of the over-65 workers who typically make up a large share of the temporary elections staff but are now at higher risk of serious illness if they’re infected.

Since the pandemic began to hit hard in early March, 15 states have delayed their primaries because of worries about spreading the infection among voters and poll workers alike.

Thanks to vote-by-mail, Oregon is holding its election as scheduled on Tuesday.

To many Oregonians, marking their ballot in the comfort and safety of their home may make voting here seem like business as usual. But elections officials around the state have had to reconfigure their behind-the-scenes operations to keep from creating their own COVID-19 hot spots.

Counties are bringing in fewer temporary elections workers to give them more room to spread out. And they don’t always have the same elections experience as the veterans they’re replacing. As a result, officials say they may take longer to count all the ballots.

“But that’s completely all right,” said Marion County Clerk Bill Burgess. “I don’t care if it takes us a lot longer to process them. The most important thing is that people have gotten their ballots and they get them back to us.”

Unlike in most states, Oregon doesn’t need tens of thousands of temporary workers to staff local polling places on Election Day. However, Oregon’s 36 county elections offices rely on scores of temporary elections workers to help process ballots flooding in through the mail and drop boxes. They typically work sitting next to each other at large tables.

That won’t work this year.

Multnomah County Elections Director Tim Scott said he was initially concerned about losing his temporary elections workers, many of whom have several years of experience handling ballots. They do tasks that include opening envelopes and preparing ballots to be read by electronic scanners, verifying signatures and deciphering a voter’s intent when a ballot contains scrawled corrections.

“We’ve definitely had a lot of folks who have chosen not to work the election,” Scott said, “for their own health concerns or those of someone they might live with or take care of.”

However, Scott and other elections officials quickly learned that the pandemic was producing a new supply of potential workers — those idled by the widespread shutdowns. Many counties were able to shift their own employees over to elections. In Multnomah County, the library closures freed up several employees to work the primary.

Officials also had to figure out how to space out their workers, which presents its own problems. Many county elections offices were already operating in cramped quarters. And they typically deploy workers in small teams — often three or four — to perform the job together. That ensures nobody is doing anything to a ballot without at least one other set of eyes watching.

“People in elections have to work shoulder-to-shoulder for elections integrity,” especially in such sensitive tasks as duplicating a ballot that’s been ripped or crumpled so it can be read by a scanner, Burgess said. He will now deploy two-person teams who will keep their distance from other teams. He is also providing face masks, gloves and face shields for workers, as are other offices.

In Washington County, Elections Division Manager Mickey Kawai said she was determined to provide adequate separation for all workers.

“Ultimately, the plan is, whatever we do, we have to keep 6 feet of physical distance,” she said, adding that she is placing each of her two-person teams at the opposite end of a table. “… At 6 feet, I can still see what my neighbor is doing.”

Scott said he’s also keeping workers 6 feet apart. That means he will only have about 150 temporary workers this year, compared to around 275 for comparable elections in the past.

In addition, Scott has been trying to automate as many tasks as possible. As a result of the pandemic, the county purchased new software used by the banking industry. It allows the automated verification of about 60% of the ballots returned by voters. The other signatures are verified by workers who view scanned copies of the return envelopes.

As a result of the social distancing, State Elections Director Steve Trout said most counties must operate with leaner staffs this year.

Many have started processing ballots earlier than before, hoping to spread out the work over a longer period of time. Ballots were mailed out during the last week in April.

Elections officials have also been encouraging voters to get their ballots in as early as possible. That could help reduce the last-minute crush of ballots before the 8 p.m. Election Day deadline.

Typically, more than 40% of voters in primaries return their ballots on the last two days of the election. Those ballots will take longer to count this year in many counties.

Trout said election workers have one new tool in their arsenal: a law approved by the Legislature last year that provides prepaid postage for returned ballots.

As a result, Trout said, “you don’t even have to leave your neighborhood” to vote. Voters could drop their ballot in their mailbox or a local Postal Service mailbox without worrying about affixing a stamp. And officials are hoping that’s encouraged voters to get their ballots in earlier. It’s hard to tell if that is happening because no one’s sure what the ultimate turnout will be.

This close to an election, voters need to use a drop box if they haven’t already mailed their ballots, officials say. That could be one other thing voters notice: Their usual go-to drop box might no longer be in operation. Many have been located in libraries and city halls that are now closed. An up-to-date list can be found at oregonvotes.gov.

State law allows counties to begin counting ballots one week before the deadline. But they can’t release any results until after 8 p.m. Tuesday. Those first reports, shortly after 8 p.m., should contain a “huge chunk of the results” that will give a clear picture of most winners and losers, Scott said. But in close races, voters might have to wait longer than usual.

Trout said that if elections officials find themselves backed up after the Tuesday deadline, they can go to the governor or the courts to extend the 20-day period for certifying the election results.

So far, Trout said the state has managed to avoid some of the pitfalls he worried that the pandemic could bring. For example, he fretted that the virus could sweep through a county elections staff and sideline many key workers.

Trout was also concerned that COVID-19-related misinformation — or deliberate falsehoods — could give voters incorrect information about how to register or vote in the election. He hasn’t seen much of that, although he said Facebook posted a bad link to the state’s online voter registration form in April. But the company corrected it “after we brought it to their attention,” he said.

Paul Gronke is a Reed College political science professor who runs the school’s Early Voting Information Center. He said it appears Oregon has been able to avoid the problems that have bedeviled so many other states this year.

From his discussions with election officials, he said he was relatively confident the revamped elections procedures will not damage the integrity of the primary. He said he’s more worried about the November election, particularly if something happens to the U.S. Postal Service.

President Donald Trump, who has long been critical of the postal service, has said he won’t support a financial bailout of the agency unless it raises rates on large shippers like Amazon.

“If something happens to the postal service,” Gronke said, “we’re going to be in trouble. That’s a high point of vulnerability in our system.”

Back at Multnomah County elections headquarters, Briana Loughlin said she was glad to get a break from working at home.

“I was really excited when this came up,” she said. “I was like, ‘Oh, this is an opportunity to do something that feels actually really useful.’”