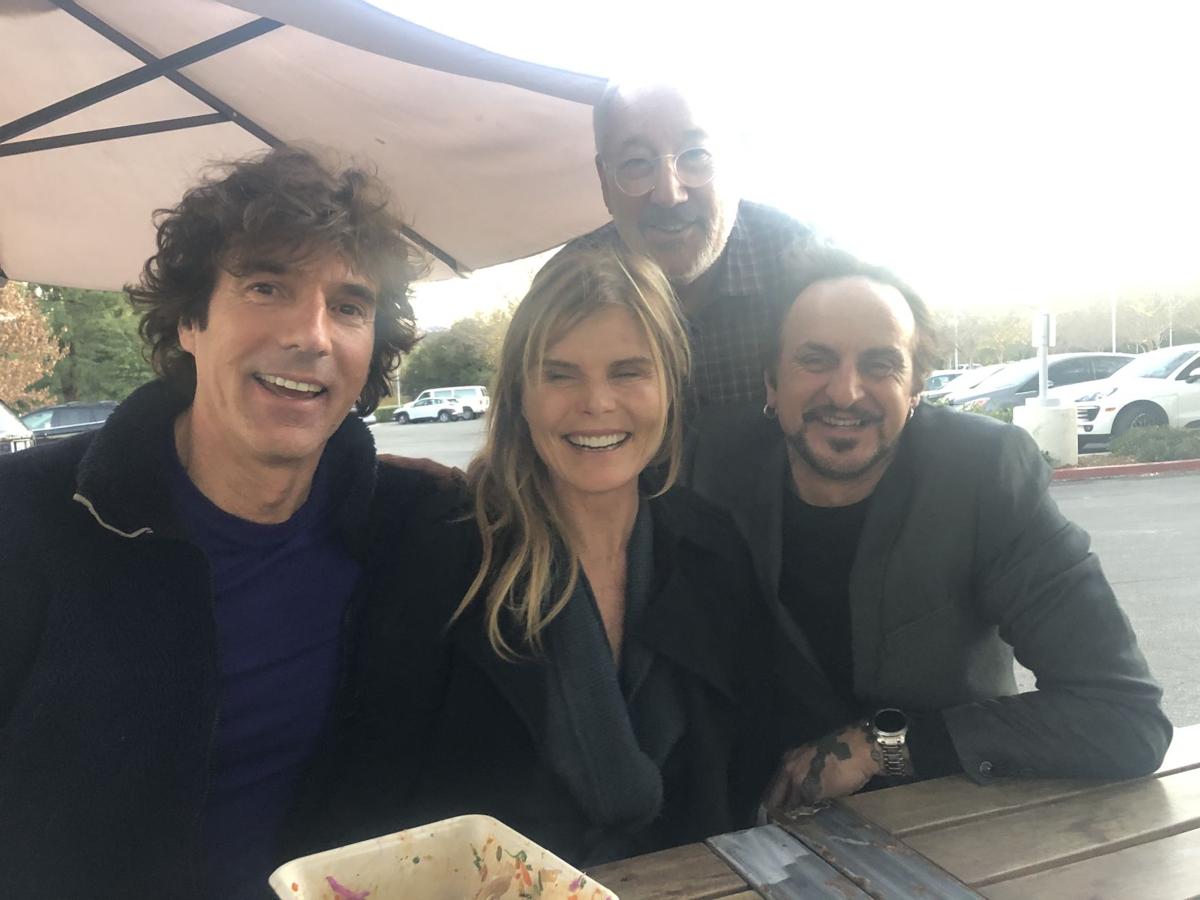 From left, Bobby Williams, Mariel Hemingway, Howard Asher and Nicola Carpelli pose for a photo together. Hemingway, Carpinelli and Asher have formed the Dead Poets Foundation, a nonprofit working toward suicide prevention. Williams is Hemingway’s coauthor and life partner. 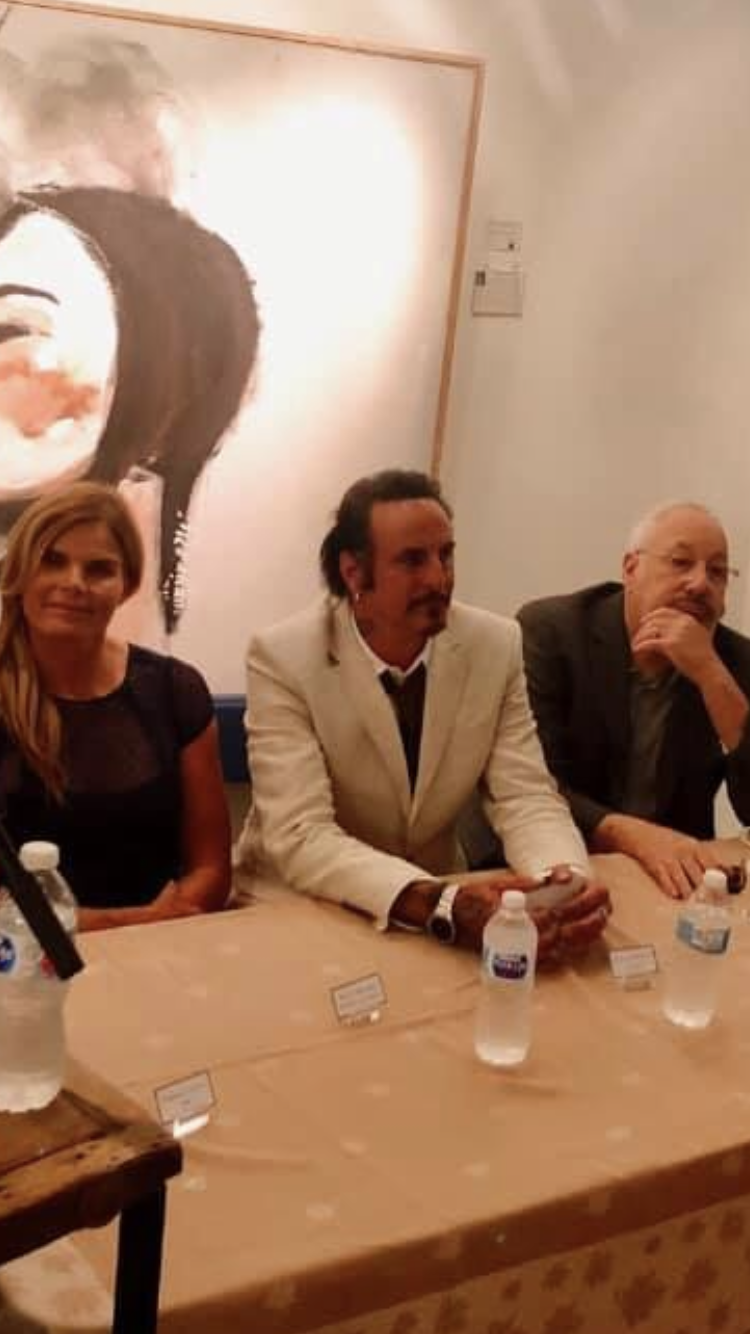 From left, Mariel Hemingway, Nicola Carpinelli and Howard Asher at

September’s opening of “The Dead Poets.” After the event, the three convened to launch the Dead Poets Foundation, a new nonprofit aimed at suicide prevention through art, intervention and other means. 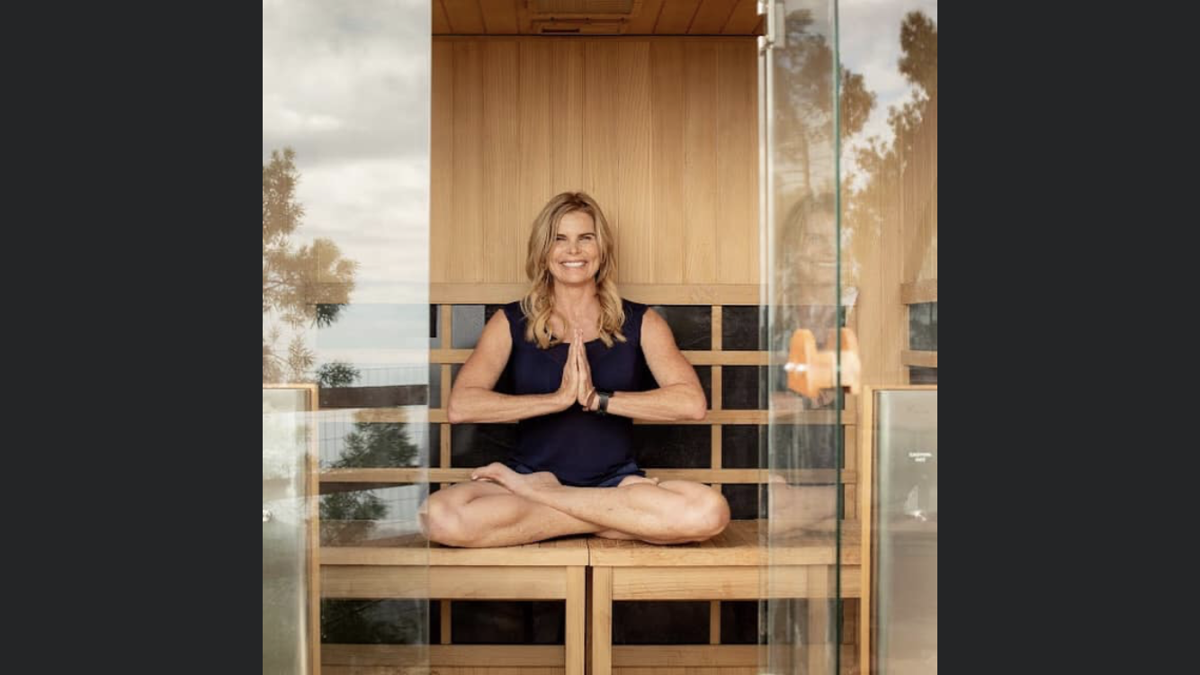 Actress and wellness author Mariel Hemingway is one of the founders of the Dead Poets Foundation, inspired by Carpinelli’s exhibit and the panel discussion in which she took part.

From left, Bobby Williams, Mariel Hemingway, Howard Asher and Nicola Carpelli pose for a photo together. Hemingway, Carpinelli and Asher have formed the Dead Poets Foundation, a nonprofit working toward suicide prevention. Williams is Hemingway’s coauthor and life partner.

From left, Mariel Hemingway, Nicola Carpinelli and Howard Asher at

September’s opening of “The Dead Poets.” After the event, the three convened to launch the Dead Poets Foundation, a new nonprofit aimed at suicide prevention through art, intervention and other means.

Actress and wellness author Mariel Hemingway is one of the founders of the Dead Poets Foundation, inspired by Carpinelli’s exhibit and the panel discussion in which she took part.

The show was unique in that it consisted almost entirely of portraits of artists, musicians, authors and other souls lost to suicide, painted by Carpinelli, a 54-year-old artist who survived years of drug and alcohol abuse, depression and suicidal thoughts.

A panel of several experts on suicide coincided with the opening of the exhibit. The panel included Howard Asher, a Los Angeles-area psychologist, psychotherapist and trauma expert, along with author and actress Mariel Hemingway, who’s lost several family members to suicide, among them her grandfather, Ernest Hemingway, and her supermodel sister, Margaux Hemingway — two people whose portraits Carpinelli included among his paintings.

Since the event, Carpinelli, Hemingway and Asher have forged a bond, creating the newly minted nonprofit the Dead Poets Foundation (deadpoetsfoundation.org), dedicated to suicide prevention and healing for families. With the arrival of the coronavirus on American shores, the three founders share concerns that its work will be needed now more than ever.

The three envision opening a Dead Poets facility in Bend. It would be a place “where youth, senior citizens, veterans can come and create,” Carpinelli said. “Offer to them art classes, free expression classes. Mariel, we’ve talked about her coming up once a month and doing an acting class or wellness workshop. Dr. Asher as well, coming and speaking to people. … We want to do something and inspire others to do the same in other cities.”

In 2018, Carpinelli was rocked by the suicide of celebrity chef and author Anthony Bourdain, who hanged himself in June of that year.

The shocking loss of Bourdain, whom Carpinelli looked up to, inspired him to pick up a brush and begin painting after a more than decadelong layoff. Carpinelli stopped painting in 2006 amid the shuttering of his Seattle-area gallery and a painful divorce amid substance abuse, depression and thoughts of suicide.

Over the next several years, he found the path to sobriety. Still, it wasn’t until the death of Bourdain, Carpinelli said, that he felt inspired to start painting again. Next he painted Soundgarden singer Chris Cornell, who hanged himself shortly after a 2017 performance.

“There was something about those guys that was so vital and intelligent, and they had a message to say. They really impacted my life with (Cornell’s) lyrics and the things Bourdain spoke about,” Carpinelli told The Bulletin last year, prior to the opening of “The Dead Poets.” Others he painted included 19th century Dutch painter Vincent Van Gogh, Nirvana singer and guitarist Kurt Cobain and comedian and actor Robin Williams.

As last year’s exhibit drew near, Carpinelli reached out to Margaux Hemingway’s younger sister, Mariel Hemingway, about serving on the panel. A well-known actress for films includes “Manhattan” and “Star 80,” in more recent years Hemingway has devoted herself to fitness, mental health advocacy and writing. She’s the author or coauthor of numerous books, including 2015’s “Out Came the Sun: Overcoming the Legacy of Mental Illness, Addiction, and Suicide in My Family.”

Carpinelli also sought the wisdom of Asher for the panel, crediting the Los Angeles-area psychologist and psychotherapist with helping him find the path to sobriety.

“Dr. Asher and I met in 2014 at a rehabilitation place in California called Angel Villa,” Carpinelli explained. “He was the guy that changed everything for me, and the way I thought about my feelings, my depressed feelings. He just became such a big fixture, even after I left, we became friends later on. … He is considered one of the leading trauma specialists in the nation.”

The event drew an overflow crowd, some of whom took in the proceedings via TV monitors placed temporarily outside the gallery.

Soon after the well-received event and exhibition, letters and emails began to arrive, including one that said, “This will create a trickle down effect, and because of your actions, someone will be saved.”

“I got more than a dozen emails from different organizations that were just blown away because suicide is such a tough topic. Everything gets kind of dumbed-down, and somehow we were able to bring the community together, old and young. We had kids of every single age. It was so beautiful,” Carpinelli said. “You don’t see that kind of group-, family-oriented gathering. It’s usually concerned parents, but I think the art kind of made people feel safe, like, ‘Let me go look at some nice art with rock stars,’ or whatever. It made it a little more palatable.”

Among other developments in the wake of the show, the publishing company Random Content, co-owned by Lawrence O’Flahavan and comedian Carl Reiner, approached them about doing a coffee table book.

“They approached us to do an art, coffee table-type book with Dr. Asher’s views on suicide awareness and then Mariel’s views, mine, and the idea is Mariel’s going to be interviewing (the families of) different celebrities I painted,” Carpinelli said. “I think it was Mariel who said, ‘This is nothing short of divine intervention, and this deserves to be taken everywhere.’”

After the show, the panelists got together and said, “Wow. What should we do next?” Carpinelli said. “We started right away, within the first couple of weeks” forming the foundation, which will be funded through grants and donations.

“Dead Poets Foundation is conceived and dedicated to helping people move away from the impulses of self-destruction toward the hope and blessings of life,” reads its mission and purpose statement, in part. “Addressing all aspects of the tragedy of suicide through art, publication, event panel discussion, and advocacy, the mission of Dead Poets Foundation is to inspire and equip all of us for living.”

With the introduction of the deadly coronavirus, and the social isolation it’s engendered, the three are concerned the need for a nonprofit such as Dead Poets Foundation will be higher than ever.

“I think it’s important because of the reality of the situation, and the reality involves you now don’t have an income — most people,” Hemingway said. “If you have a not only compromised immune system, but a compromised state of mental health and anxiety issues, these are the kinds of issues that need to be addressed.”

Hemingway said that her decision to address her family’s past occurred quite suddenly.

“Yes, I was catapulted into this kind of a family with this history of suicides and mental illness and addiction, all of it, and yet I woke up one day and realized, ‘Oh, my gosh, this is what I do.’”

She loves that sharing her story might “help others feel safe to share theirs. And I just don’t think anybody’s story’s that different from one another’s. I really don’t,” she said. “I think all our stories have different wrapping paper, but we all have suffered from … a lot of different things. With this pandemic, we’re suffering from fear. Fear is the greater pandemic. It’s the greater thing that we have to go, wait. That’s why we need a voice like Dead Poets.”

Asher added that along with fear of the coronavirus, uncertainty of the future is also making people suffer.

“This pandemic is exactly the kind of thing that obviously affects and touches people in different ways,” Asher said. “Because of differences, you want to help people focus on what really matters.”

They’ve discussed opening a location in Los Angeles as well as Bend, but they stressed that such centers would not be exclusive to Dead Poets Foundation.

Hemingway said it could expand on a larger scale, perhaps in cooperation with other foundations.

“We’re not trying to be exclusive,” she said. “We do want it to expand but how it expands is (up to) who wants to step up, who wants to be a part of this movement. And I think it’s a big movement, and it will pick up pretty darn quickly because it’s so necessary.”

Hemingway added, “I think what’s happened … in the last month or in the last few weeks makes us realize in a very humble and wonderful way that we have the authority to join hands and make a difference.”