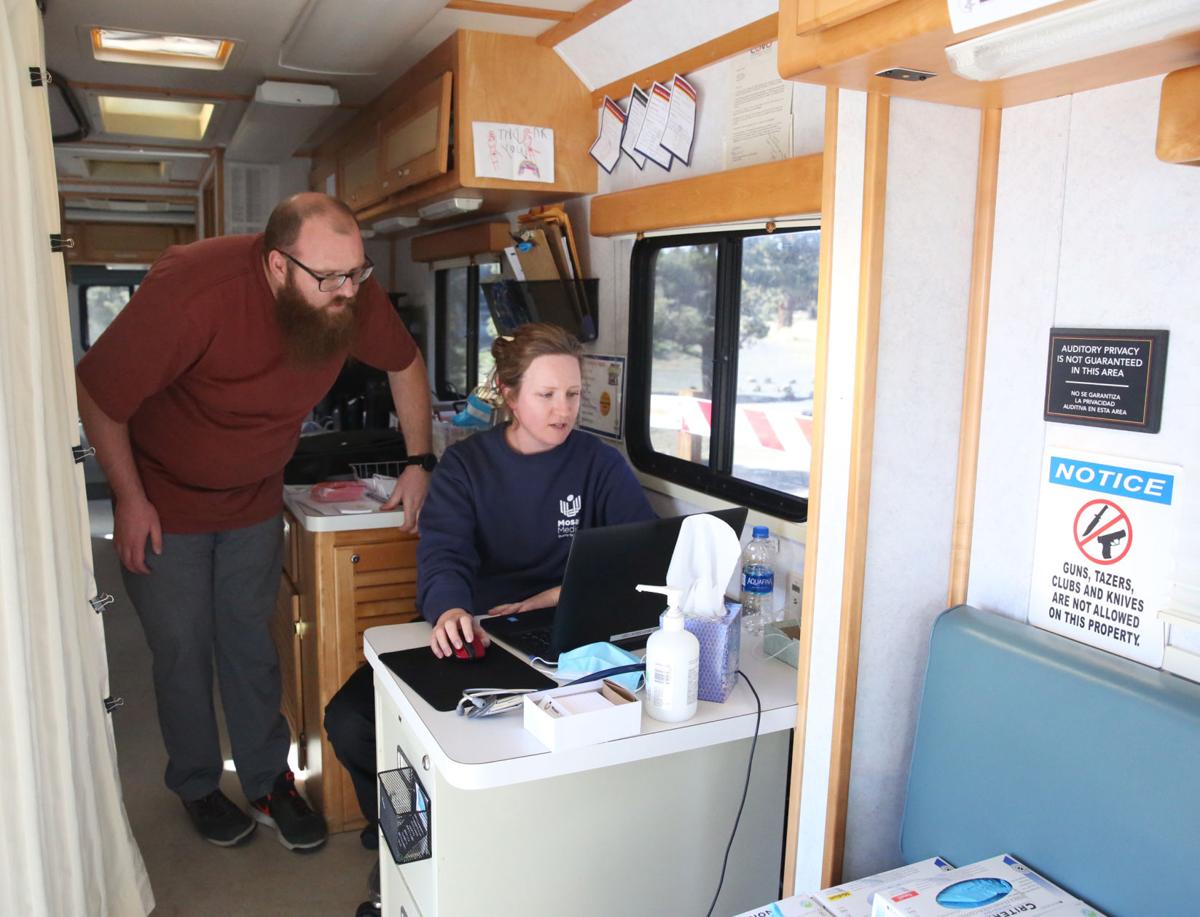 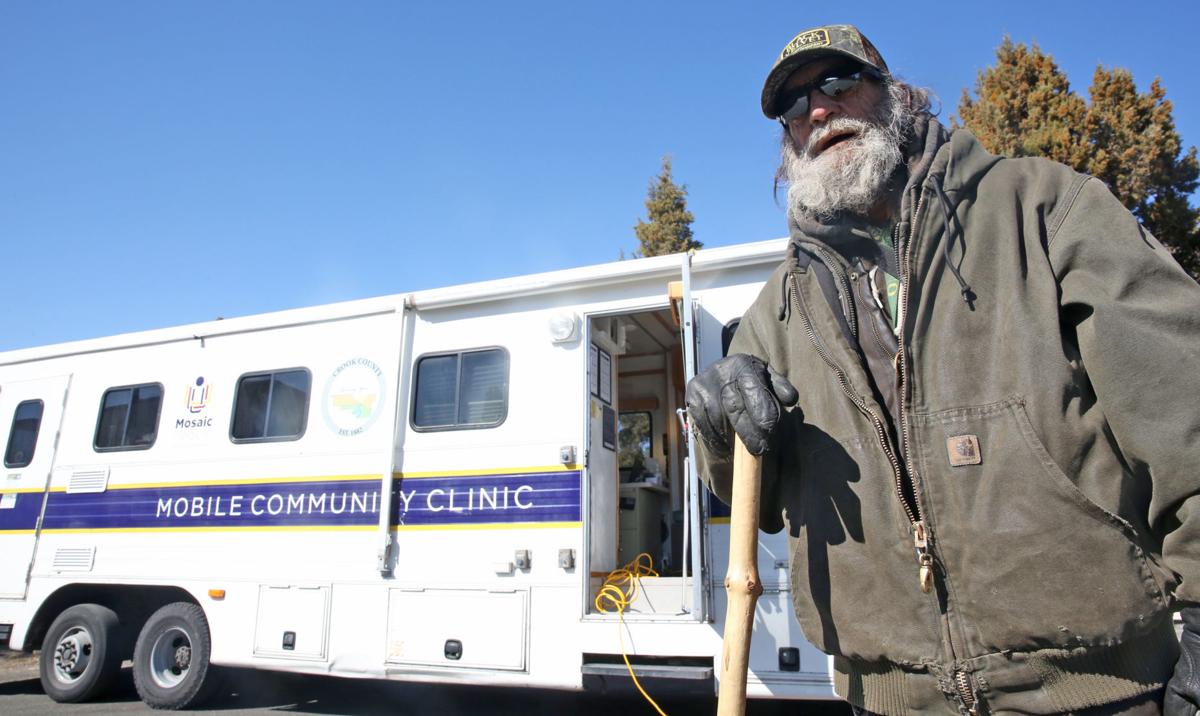 Sandwiched between acres of land dotted with sagebrush and the corporate offices of Suterra, about a dozen homeless men and women waited on the edge of a dead-end road for medical care Thursday.

They were there to be seen by a physician in Mosaic Medical’s Mobile Community Clinic, a retrofitted RV with a small exam room inside. Many live in the camps out on Juniper Ridge, a 1,500-acre parcel of city-owned land in northeast Bend.

Last year, the clinic treated about 500 patients. And for several, like Evan Tipton, of Bend, this mobile clinic is the only chance to access health care.

The 53-year-old homeless man has relied on the mobile clinic for years to get his medications and treatment for a suite of medical issues, including COPD and congestive heart failure.

“Without them helping me get my meds, who knows where I’d be,” Tipton said.

But the medical professionals behind this service are having to get creative to continue what they do in a world ruled by the COVID-19 pandemic.

As the potentially fatal virus spreads, addressing the health needs of some of the most at-risk people in society is only becoming more challenging and more critical than ever, said Kerry Gillette, the physician assistant who runs the clinic.

“I’m really motivated,” Gillette said. “Yeah, there’s a lot of fear and anxiety, and I don’t know how bad this is going to be, but I’m concerned and want to do the best I can with limited resources as long as I can safely do so.”

She doesn’t want them to become a hidden casualty of the raging public health crisis.

“It’s important to me they know their lives matter,” Gillette said.

For the past few years, Gillette has traveled around Central Oregon in the mobile clinic to different homeless camps and service providers, serving patients who either have a difficult time getting to or are resistant to coming into a brick-and-mortar clinic, she said.

Gillette, 36, began with the mobile clinic because she wanted to serve people who are often overlooked in society.

“It’s very fulfilling to care for people who I think a lot of times feel singled out,” she said. “I want people who have had bad experiences to feel dignity from me.”

The mobile clinic faces some of the same challenges a regular doctor’s office does amid the global pandemic, such as a shortage of personal protective equipment.

But the clinic faces barriers a regular doctor’s office often does not. The clinic doesn’t have air filtration like most exam rooms have, said Elaine Knobbs-Seasholtz, director of strategy and development at Mosaic Medical. It’s a feature that is key to minimizing the spread of the virus.

The exam room in the RV is also very small, which makes it difficult to maintain the six-foot social distancing gap recommended by public health officials.

“Everyday has something new,” Knobbs-Seasholtz said. “We’re trying to figure out what’s the best way to keep staff safe and to keep serving patients.”

Traditional clinics have gotten around similar barriers by telling patients to stay at home and instead do their appointment via the phone or over a livestream.

But you can’t shelter in place without shelter, Gillette said, and she estimates only about a third of her patients own phones.

“We’re telling everyone to hang on your couch and binge Netflix and have Amazon deliver what you need, and my patients can’t obviously do that,” Gillette said.

There were barriers that almost closed down the mobile clinic early last week until Gillette and others found a solution: They put a cell phone outside the RV and told patients to call. Staff would then clean the phone between uses, and only come out of the clinic to see a patient if absolutely necessary.

With this new fix in place, Gillette plans to operate three days a week at camps off China Hat Road, in Juniper Ridge and in Redmond.

“We want to make sure these patients have the same kind of access as someone on their couch,” Gillette said.

But challenges remain and will continue to grow as the virus spreads. Many of Gillette’s patients are not only more vulnerable to the virus, but also are the least equipped to take healthy steps to prevent its transmission.

Treating the homeless is especially critical during a pandemic, Gillette said. Many of Gillette’s patients have a variety of other underlying respiratory issues, like COPD and chronic bronchitis, making them particularly more vulnerable to the coronavirus.

A good number smoke, as well. Lifestyle realities, like being exposed to more dust and particles that come from open camp fires and butane heaters, also disproportionately affects her patients, she said.

“I have a lot of folks I’m concerned about,” Gillette said.

But with restaurants, libraries and several other public spaces closed by Gov. Kate Brown’s shutdown order, Gillette’s patients aren’t able to consistently do what public health officials say is critical to prevent the spread of the disease: wash their hands.

Gillette anticipates she also might be managing more mental health and other medical issues usually handled by specialists because without access to wifi from public spaces, her patients may not be able to engage in telemedicine with their regular specialists.

But there are small changes that Gillette said could help immensely. Finding a way to get phones into the hands of the homeless would make it easier for them to access healthcare remotely.

“We’re telling everyone don’t come in, call,” she said. “So if there was a way to disperse more phones for the sole purpose of accessing medical care...that would kind of level the playing field.”

Gillette also said she feels there is more the city could do to help. Having more handwashing stations around known homeless camps and other public places would be particularly helpful. Finding ways for those who are experiencing homelessness to shower is also critical, as local shelters, churches and others no longer offer those services because of public health reasons.

But for the foreseeable future, Gillette plans to see as many patients as she can, even if it’s through the driver side window of an RV.

“On one hand, I want to cry because I can’t believe this is where we are,” she said. “But then, I’m trying to say, ‘OK, what can I do with what I have that’s reasonable that allows me to take care of the most vulnerable?’”