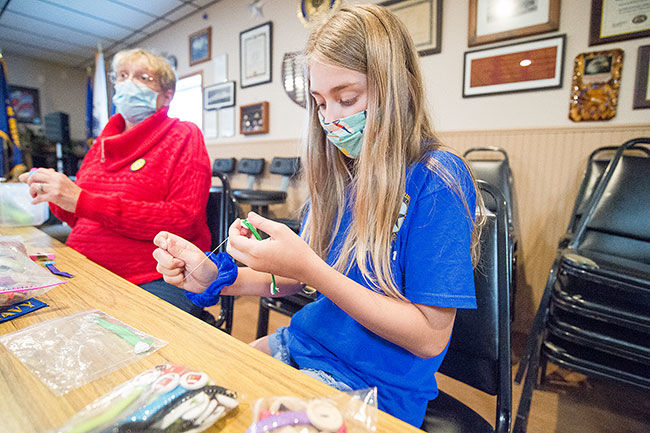 Lilly Riha sews a mask ear saver under the guidance of her grandmother, Jeanne Clayton. 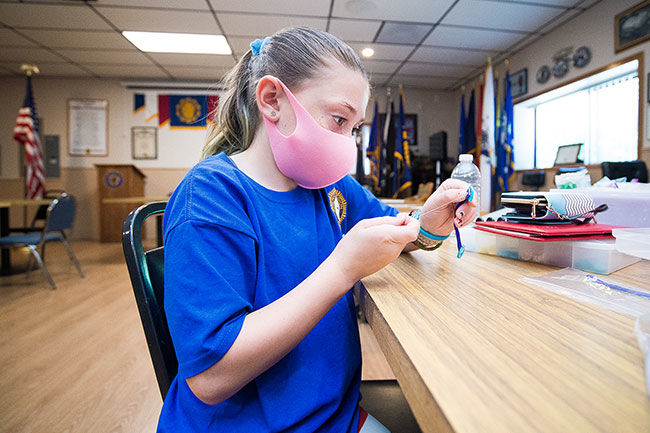 Harley Riha carefully sews buttons to an elastic band. Some of the buttons are heart-shaped and say "Made with Love." 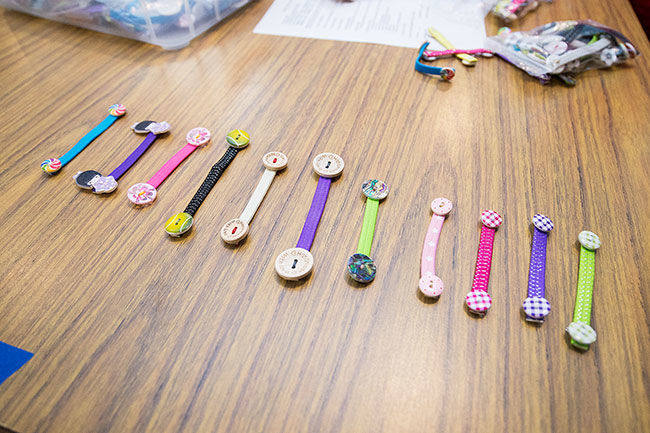 Several of the hundreds of mask ear protectors three McMinnville sisters made for delivery to nurses, veterans and others.

Lilly Riha sews a mask ear saver under the guidance of her grandmother, Jeanne Clayton.

Harley Riha carefully sews buttons to an elastic band. Some of the buttons are heart-shaped and say "Made with Love."

Several of the hundreds of mask ear protectors three McMinnville sisters made for delivery to nurses, veterans and others.

Sisters Lilly, Harley and Delaney Riha took on a big project this spring: Making ear protectors to help people who need to wear masks during the coronavirus pandemic.

So far, the McMinnville girls have produced more than 1,200 bands with buttons on each end.

Nurses, veterans and others who receive the ear protectors can place them behind their heads, then attach the straps of their masks to the buttons, rather than over their ears.

Harley, 9, Lilly, 11, and Delaney, 3, are members of the American Legion Junior Auxiliary at McMinnville Post 21. Making the ear protectors is a project that’s part of their junior auxiliary service.

They’ve had some help from some friends in the adult Auxiliary, too.

They’ve delivered more than 300 to nurses at Willamette Valley Medical Center in McMinnville.

Members of the Legion Riders will deliver ear protectors to medical professionals and residents in veterans’ homes in Lebanon and The Dalles. Those for veterans have heart-shaped buttons that say “Made with Love,” Harley said.

The sisters’ grandmother, auxiliary member Jeanne Clayton, also helped the girls buy and obtain buttons, thread and elastic headbands, which they cut to make bands for the ear protectors.

She didn’t just give them the money, though. The sisters said they earned it by helping clean and organize her house.

Harley, who is going into fifth grade, said they started the project after their grandmother showed them photos of nurses whose ears have been rubbed raw by mask straps.

“We got the idea to help prevent that,” she said.

Lilly, who will be a sixth grader, said it takes only a few minutes to make each strap. “It’s pretty simple.”

But, she and her sisters said, the ear protectors really work.