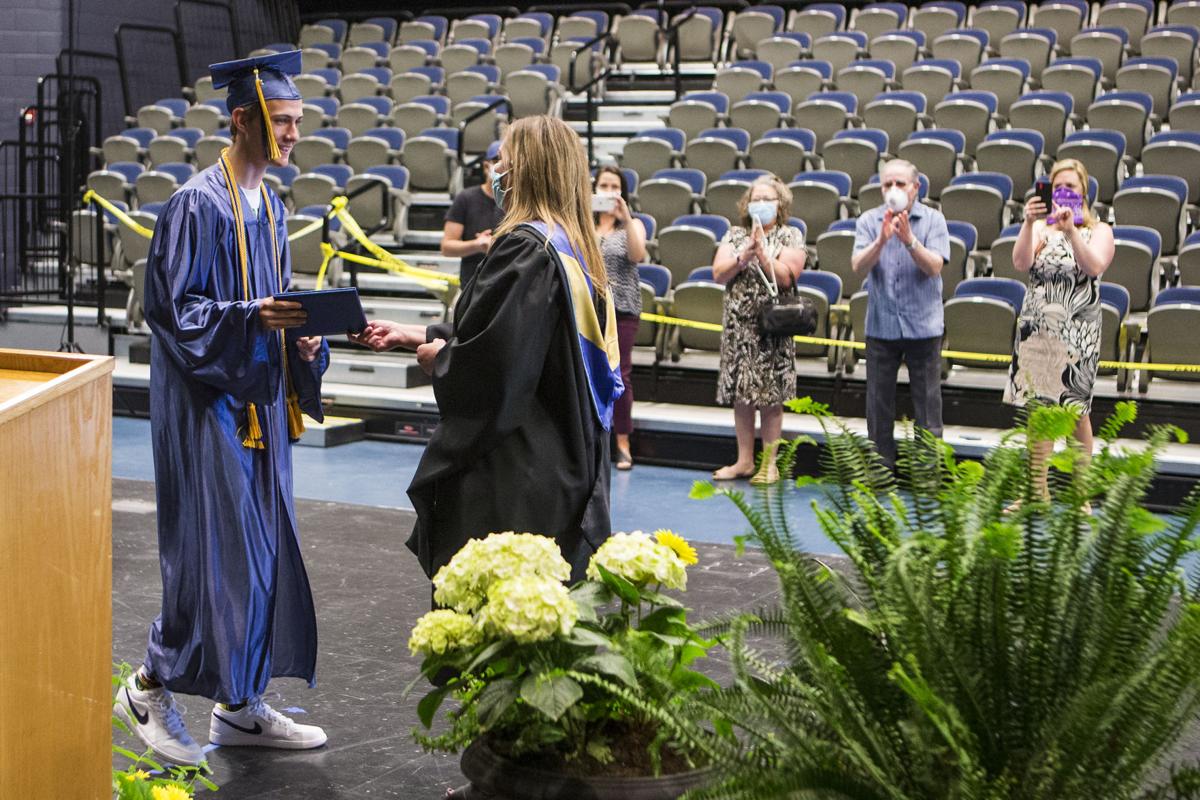 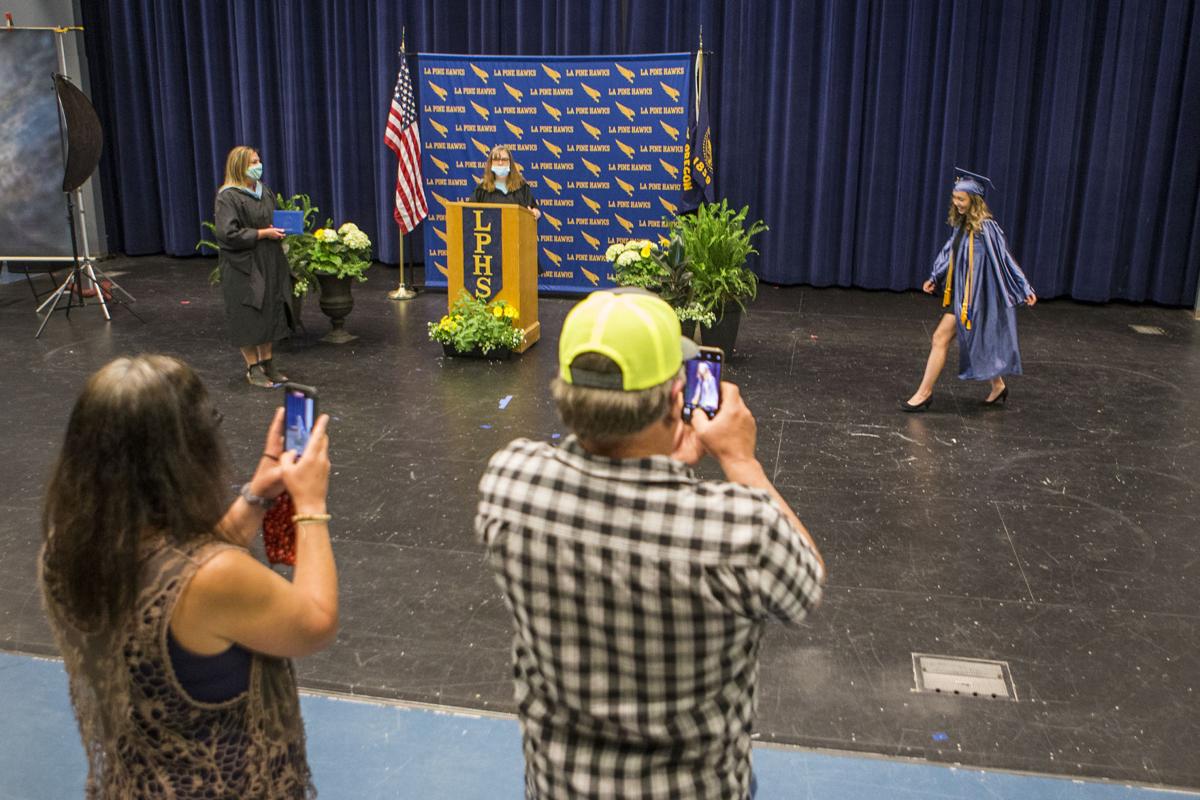 takes the stage Friday to receive her diploma from La Pine High School’s principal Anne-Marie Schmidt as her parents, April and Robert McDaniel, capture the moment with their phones in the school’s auditorium. 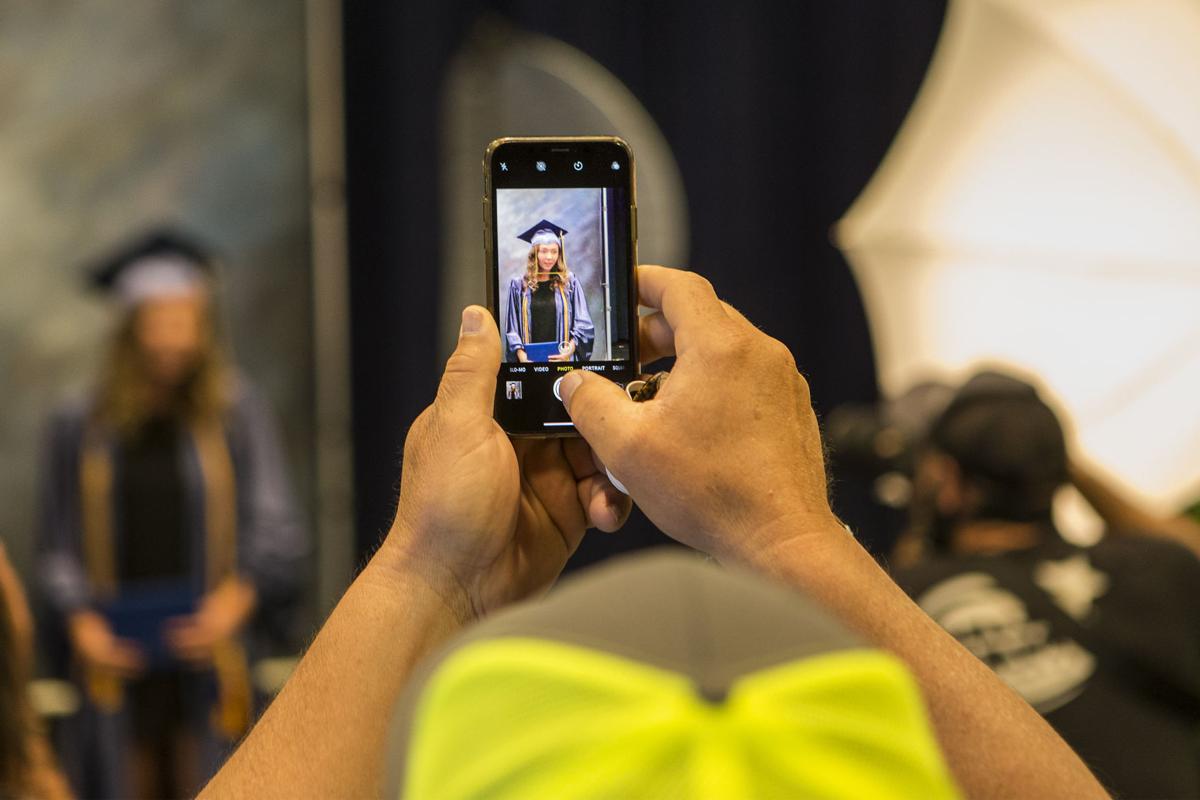 Robert McDaniel takes a picture with his phone as his daughter Tatum McDaniel gets a portrait taken after receiving her diploma at La Pine High School on Friday, May 29, 2020. 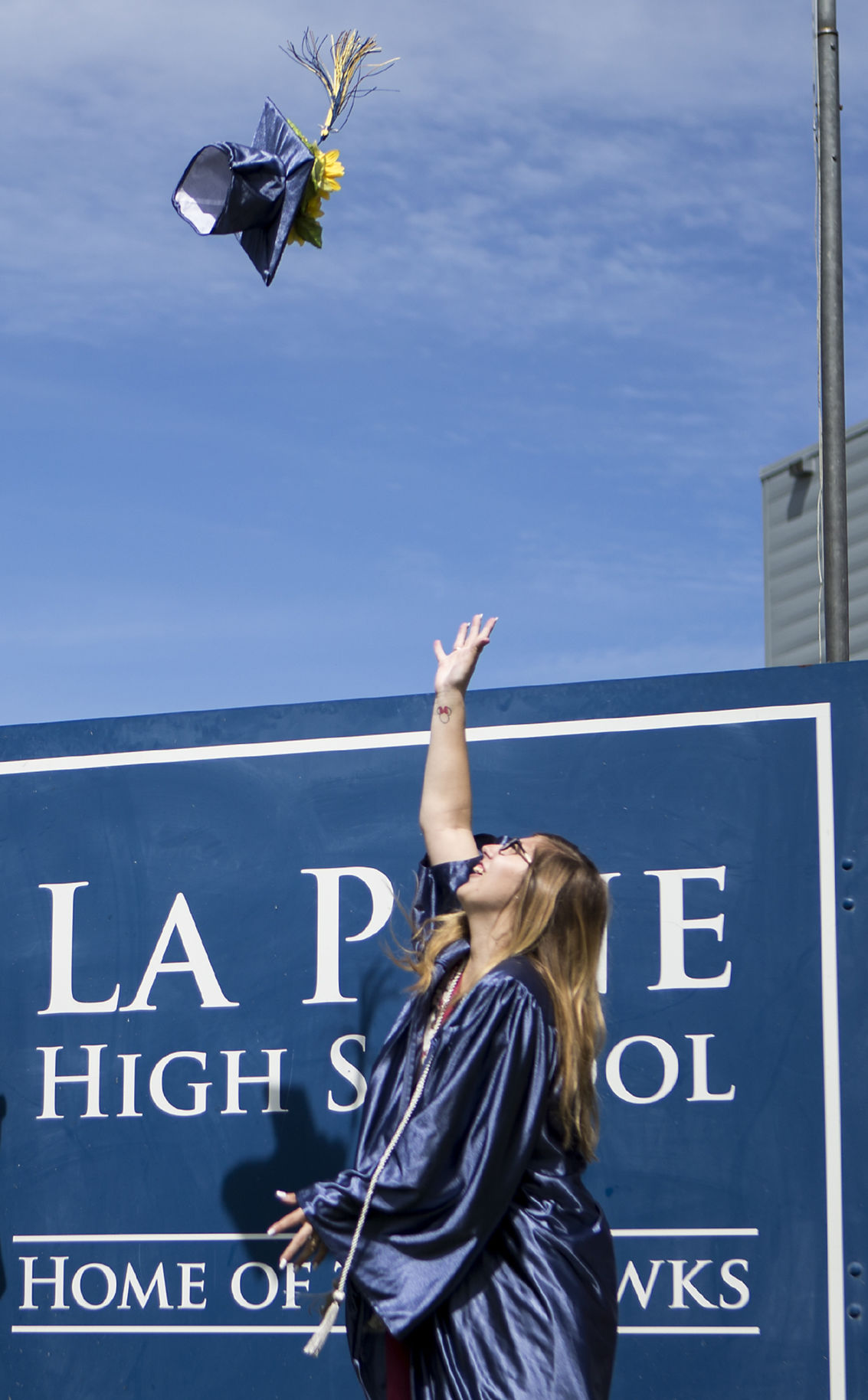 takes the stage Friday to receive her diploma from La Pine High School’s principal Anne-Marie Schmidt as her parents, April and Robert McDaniel, capture the moment with their phones in the school’s auditorium.

Robert McDaniel takes a picture with his phone as his daughter Tatum McDaniel gets a portrait taken after receiving her diploma at La Pine High School on Friday, May 29, 2020.

LA PINE —There were only a handful of family and friends Friday morning in the La Pine High School auditorium to cheer on graduating senior Triton Notary as he received his diploma, but it still felt like a celebration.

When Michelle McDaniel, La Pine High School’s senior counselor, read Notary’s name through the echoing auditorium, the senior’s family and friends — all wearing face masks to guard against COVID-19 — let out a big whoop. Prerecorded applause blasted through the speakers.

After the recognition, Notary gave a sly grin and opened his graduation robes to reveal a “Sco Ducks” University of Oregon T-shirt underneath.

After the fanfare, Notary said he felt his socially distanced graduation ceremony — a pandemic-prompted reality for the class of 2020 — might be a slight improvement on the traditional event.

“It was a little better, the family got a front-row seat,” said Notary, 17. “It was more personal.”

The personal touch seemed to work Friday at La Pine High School during the second day of a two-day graduation ceremony. Traditional graduation ceremonies were banned by Gov. Kate Brown in the spring due to the COVID-19 pandemic, forcing high schools across the state to come up with innovative ways to honor their graduates.

Not all of La Pine High School’s 98 graduates opted to participate, but those who did were pleased with the experience, said Principal Anne-Marie Schmidt.

“Only positive comments so far,” she said. “I feel like they’re thankful that we were able to do this part, and not just do the TV part.”

Graduates had the option to not wear a face mask during their stage walk and subsequent photos — although it was not optional for school staff and family members. But some graduates chose to keep their mask on for photos, Schmidt said.

Only one student, who could bring up to six guests, was allowed into the school auditorium.

Before they could enter, though, all of them were screened by school nurse Shanon Bryant, who met them in the lobby and made sure everyone had a face mask on, and used the large bottle of hand sanitizer on her table.

Eventually, the graduate and guests were led into the auditorium. Families shuffled to the back, ready to take photos as their senior walked to the podium. After the senior’s name was called and Schmidt gave them their diploma, it was time for a photograph taken by professional photographer Logan Madison.

Many graduates and their family members had bittersweet, yet grateful, feelings about the ceremony. Bond McKittrick, whose son, Austin, just walked across the stage, said he appreciated the school’s efforts to have a safe alternative to the traditional ceremony.

“Obviously, it was not what we expect for a graduation, but given the circumstances, it was great,” he said.

Graduate Skye McClendon, 18, called the experience strange, but mostly shrugged it off.

“I was looking forward to the actual graduation with the hat toss (and) the balloons,” she said. “But it’s whatever.”

“It was a little awkward, but it is what it is, I guess,” she said.

“I feel like they probably could’ve tried to do a little more than what they did, but at least it’s better than nothing,” she said.

As graduates and their families walked out of La Pine High School, a group of parents handed each student a large gift bag. The bags had everything from commemorative cups and sweatshirts to $55 in cash and a $100 Visa gift card.

In an alternate world without COVID-19, the seniors would have left that Friday for Six Flags Discovery Kingdom in Vallejo, California, said Mary Oldham, one of the parents handing out bags. These gifts were the trip planners’ way of congratulating students, she said.

“We needed something to show (that) we didn’t want our seniors to get forgotten,” Oldham said. “We wanted every single one of them to feel special during their replacement graduation.”