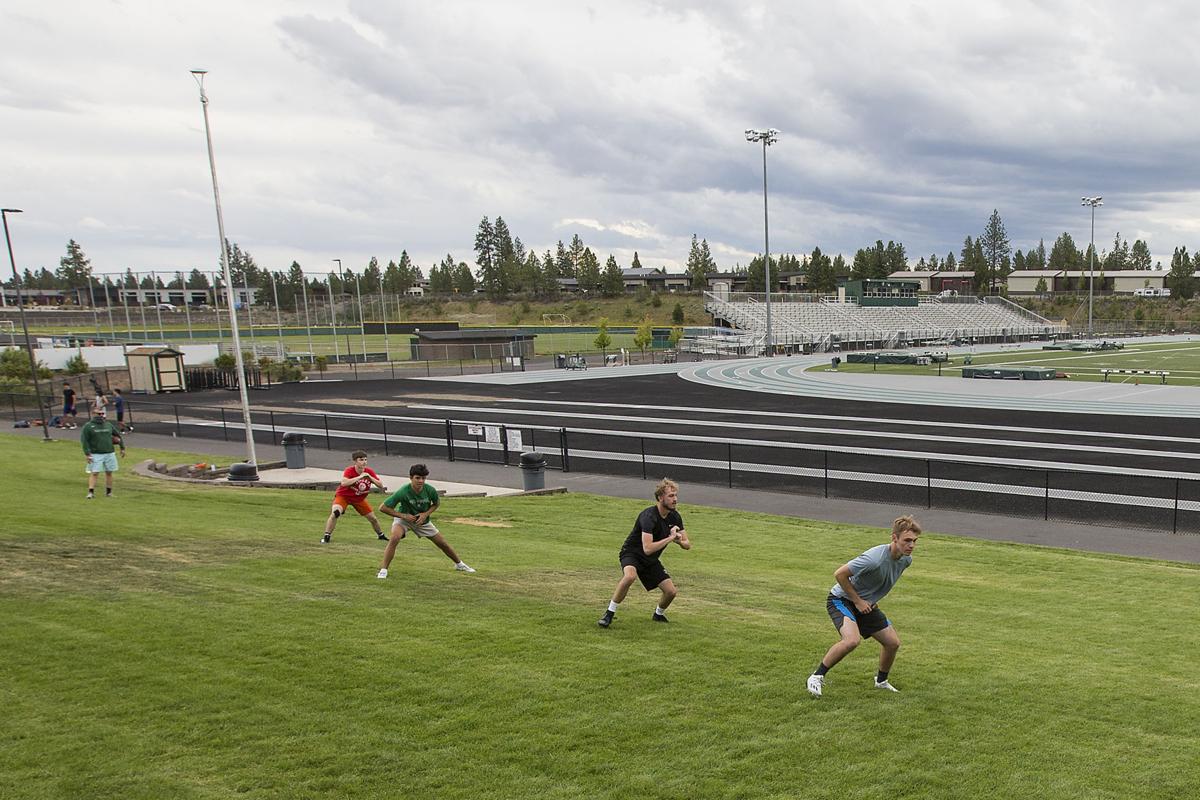 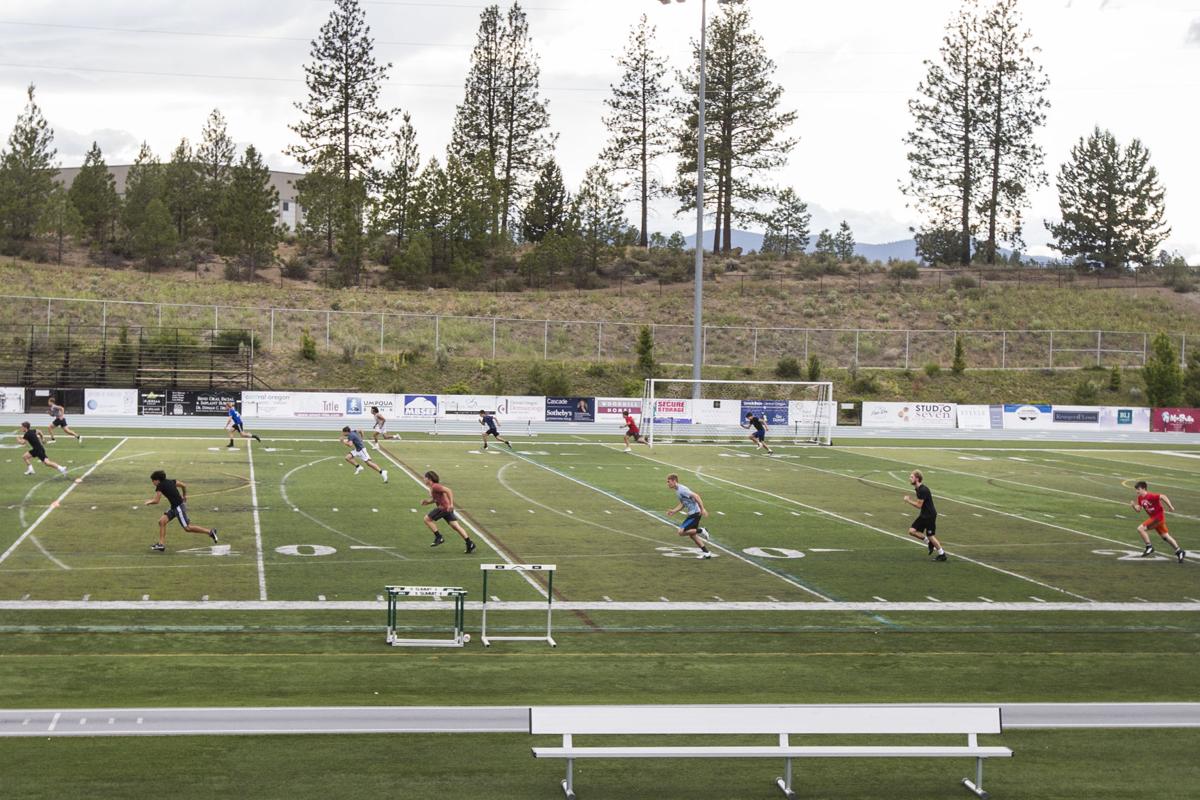 The evening conditioning practices for Mountain View High School’s football team are carefully orchestrated, but with the COVID-19 pandemic spreading, they’re less about fitness than they are about staying healthy.

Something as trivial as where a player places his water bottle is now being monitored. Players check in every day to see if they have any symptoms and have to wash their hands. They are placed in groups of 10 and remain with that same group through an entire week of practice. The groups are not allowed to mix.

Players do not have to wear masks while performing their workouts, but the coaches wear them while indoors.

“We have to do this right,” said Mountain View coach Brian Crumm, who is doing his best to follow Oregon School Activities Association guidelines to slow the pandemic. “If there is a path to us playing, then we have to be socially responsible. We have to be doing the right stuff, or else it hurts everybody.”

For nearly four months, high school athletes in Central Oregon were forced to find ways to stay fit as the pandemic closed schools, canceled seasons and turned life upside down. But for the past couple of weeks, a semblance of the usual routine has returned as athletes at Bend’s three largest high schools were allowed to prepare for seasons scheduled to start Aug. 17.

“It is nice to be able to get actual workouts in and not have to do them at home where you are not too consistent at it,” said Jake Hatch, a senior-to-be at Mountain View. “You commit a lot more to it because there is nothing else to do.”

Months indoors with limited social interaction took its toll mentally on high schoolers, but returning to a routine has helped change things.

“It is hard to stay positive when you are cooped up in your house,” added Mountain View’s Josh Cockrum. “But being in (the weight room) shows that there is a chance we can have football, and it makes it feel better when you are around your friends.”

But there is no guarantee of a mid-August start. Players and coaches are hoping their efforts are not all in vain.

“We have been open with our kids about how this doesn’t guarantee anything,” said Summit football coach Corben Hyatt. “Our approach is that until we are told differently, we are planning for Aug. 17. But In the back of our minds, we are thinking that the best-case scenario is that we get delayed and play a shortened season against Central Oregon schools.”

With the guidelines in place, more coaches are needed to monitor the practices than before. One Bend High football group had to cancel its practice because the two coaches assigned to it were unable to attend the training.

“Not being allowed to switch within pods really stretches the manpower,” said Bend coach Matt Craven. “You need at least three coaches. One of the challenges is to have enough coach coverage.”

The risk of infection is real. This week, the Newberg Graphic reported that eight individuals associated with the Newberg High summer baseball tested positive for COVID-19, and one player was taken to the hospital.

Thus far, there have been zero reported positive COVID-19 cases from the Bend-La Pine school district.

While that is a positive sign for Central Oregon, several dominoes are beginning to fall, just as they did in March when the sports world shut down.

Washington Interscholastic Activities Association announced earlier this week that it would push back its starting times for athletics to the first week of September with contests starting as early as Sept. 17.

The Ivy League has already postponed all of its fall sports in 2020. Stanford cut 11 of its varsity sports, and recent reports show the Big Ten Conference is moving to a conference-only schedule for 2020, meaning Ohio State will not visit the University of Oregon’s Autzen Stadium this fall. And on Friday, the Pac-12 Conference announced it would cancel all its nonconference matchups as well. Even the reopening of professional sports leagues has its hiccups.

“Boy, if Texas doesn’t have high school football, I don’t know how the rest of the country (can play),” Hyatt said.

The OSAA has yet to determine what the fall season could look like for high school sports. Its executive board will hold three days of two-hour Zoom video conference meetings starting July 20. One board member is hoping for high school sports to start on time but with precautions in place.

Oregon finds itself in an advantageous position because its academic year starts later in the year than other states. Even so, delayed seasons, more regional games, and shortened seasons are possible this fall.

“That’s going to be a hot topic of conversation (during the July meetings),” said Peter Weber, OSAA executive director, in an interview with The Bulletin. “We are also looking and waiting for guidance from the state to see what can be possible.

“A lot of the decisions that are going to be made are at the state level with the health authorities and the governor’s office providing directives at to what can potentially be allowed. Then it will be up to us working with our member schools to determine what that can look like.”

The hope is that they are better prepared and better equipped to handle a return of high school sports, after entire spring seasons were canceled.

Finding ways to return students to classrooms holds a higher priority for the schools than the return of activities. There is hope that there is a solution with whatever the school looks like — distance learning, a hybrid format or everybody returning to school — that activities will resume.

“I think it is a possibility because everyone has learned from the spring,” Weber said. “I do think everyone realizes, including our board, having opportunities for kids to be engaged, whatever that looks likes is important. Not only for a physical standpoint but the emotional well -being and the mental health aspect from being around other kids and coaches. If there are ways to do that, we will explore it.”