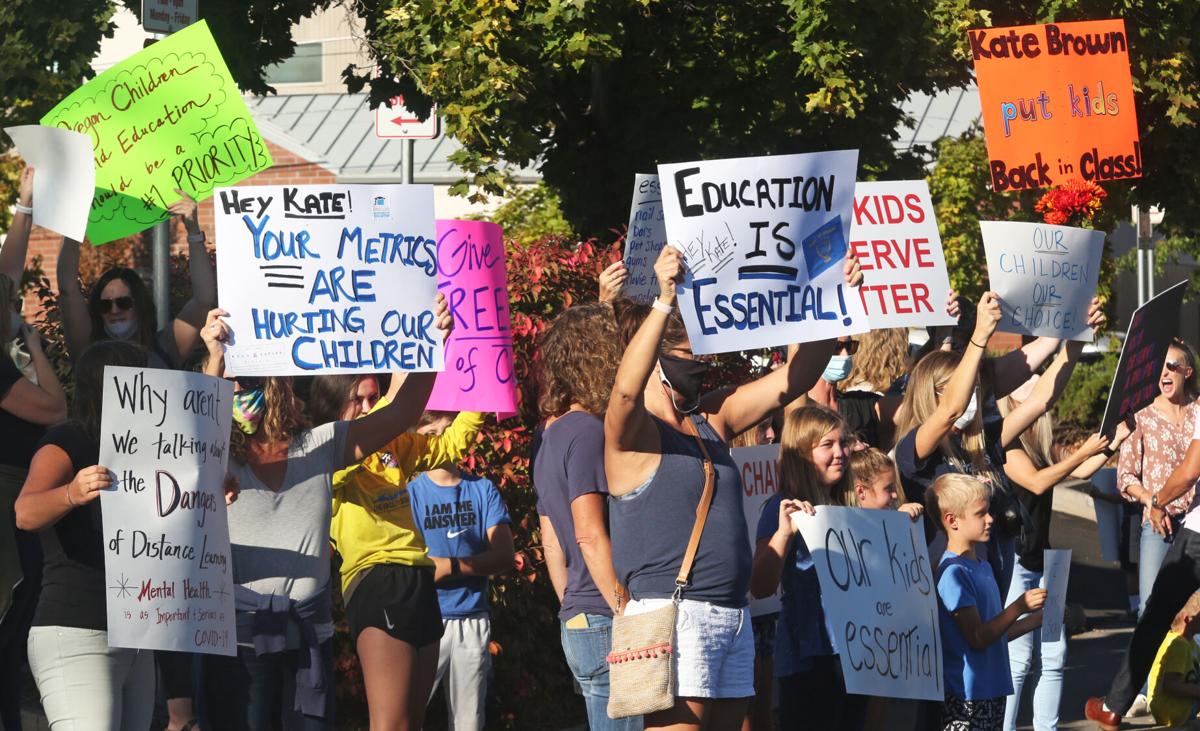 People rally in support of opening schools in Bend on Monday, Oct. 5, 2020. 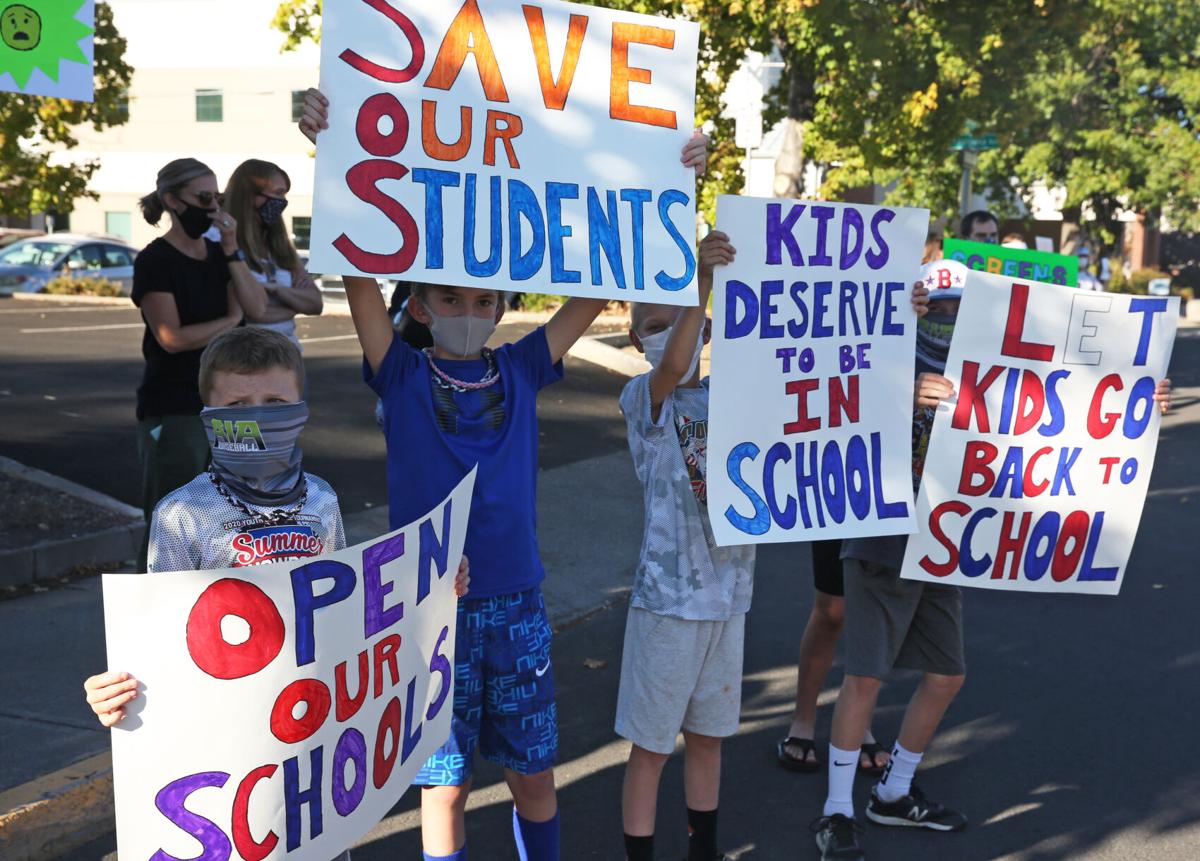 A group of students hold signs in support of opening schools in Bend on Monday, Oct. 5, 2020. 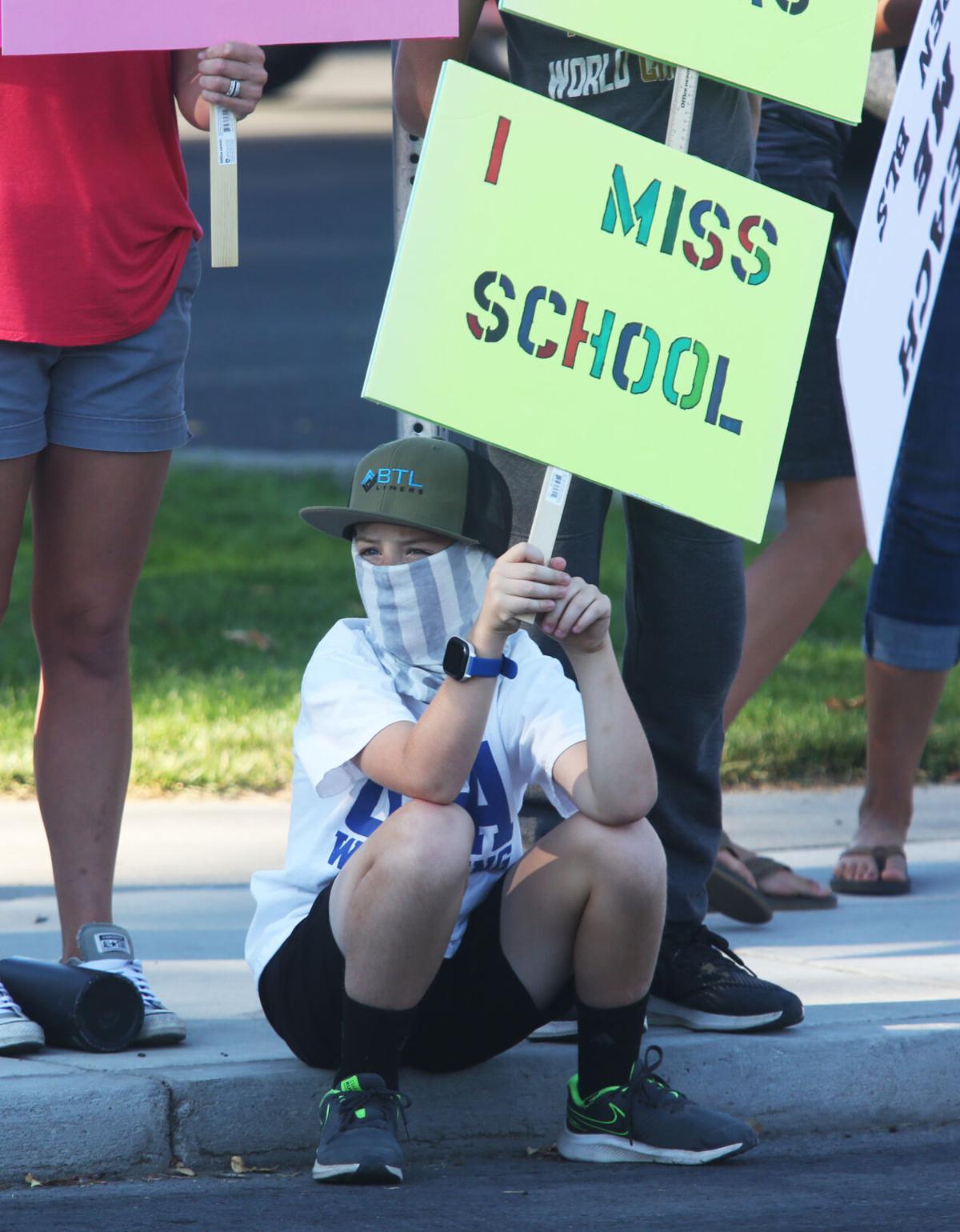 Grant Kirkpatrick, 10, holds a sign during a rally in support of opening schools in Bend on Monday, Oct. 5, 2020.

People rally in support of opening schools in Bend on Monday, Oct. 5, 2020.

A group of students hold signs in support of opening schools in Bend on Monday, Oct. 5, 2020.

Grant Kirkpatrick, 10, holds a sign during a rally in support of opening schools in Bend on Monday, Oct. 5, 2020.

“The instruction they’re getting now is not adequate,” said Amy Ferris, whose daughter attends Mountain View High School in Bend. “The teachers are doing everything they possibly can, but the technical glitches make it too hard.”

As of 4:30 p.m., about 150 people were present at the rally. Many held signs with slogans like “Screens aren’t school,” “Kids need interaction not isolation” or “Our children our choice.”

Along with the rally, a number of parents pledged to not log their children into online distance learning Monday, as a one-day virtual strike.

It is unclear how many families participated in the virtual strike as of Monday evening, as Bend-La Pine doesn’t receive daily online attendance numbers until the next day, said district spokeswoman Julianne Repman.

Kelly Dlach — a Bend mother of three students at Pine Ridge Elementary who organized the rally and virtual strike — said she was inspired to lead the local effort after seeing similar groups in other parts of Oregon such as Salem and Medford.

But she also was upset that while schools stayed closed, Oregon made sure to reopen bars, day care centers and other parts of daily life.

“Right now, public schools are the only thing closed, and I don’t think that makes any sense,” Dlach said before the rally.

Although most signs were apolitical, there were a few signs attacking the governor or the press, such as “School over media fear,” “Hey Kate! Your metrics are hurting our children,” and “Brown is a clown.” The latter sign was held by a young child at one point in the rally.

Although many at the rally wore face masks, a few did not. And the crowd was tightly packed on the sidewalk.

Danielle White, a kindergarten teacher at Three Rivers School in Sunriver, said teachers should return to classrooms if they feel comfortable.

“As a teacher, we have a great immune system: we’re around germs all the time,” said White. “I’m not really worried about getting sick.”

Bend-La Pine Superintendent Lora Nordquist said she sympathized with these families, but the district was stuck with the state’s rules.

Nordquist suggested that the state should consider restricting other activities, such as bowling and retail, to help bring COVID-19 numbers down so students could return to classes.

“My kids can play youth soccer, my teenager can have a job at McDonalds, but they can’t go to school. It’s hard to justify that to people, because I don’t understand it myself,” Nordquist said in a phone interview. “It doesn’t feel, to me, that our state is saying in-person education is a really high priority for us.”

Since I notice in the photo a number of these folks mask less, I guess they weren't too concerned about the meeting the metrics to open up. The virus would magically disappear, per mr trump.

Danielle White of Sunriver? That sounds like White Privilege, and I imagine Aunt Jemima and Uncle Ben are rolling over in their graves. Please stick to the local Presbyterian clergy/social activist interviews.

You have to laugh - Bend citizens, or OR in general, always vote in Democrat mayors, senators, and governors; yet these same pro-Democrat voters are surprised and upset when government intrudes into their lives, in this case the continued governmental mandated closure of schools. If you vote Democrat, you're voting for a basic Democrat political tenet which is large government - heavy-handed governmental involvement in society. Just look at the modern history of the Democratic party. If citizens want less governmental involvement, then vote otherwise. For example, the red states of ID and MT have reopened schools, restaurants, etc. and don't require face masks generally. Those red states haven't imploded; their cases are the same or less than OR. Children are far more resilient to Covid-19 as well.

Sure Bob, because all is beautiful with the POt (Party Of trump). Instead of "Dem Hoax" we could have had national leadership shutting us down for six to eight weeks, a mask policy that isn't that hard to follow or understand and these kids would probably be back in school right now. Funny, you don't mention the beautiful Red states of FLA, TX, GA and their deaths under R leadership. Better take a closer look at Idaho's numbers. They're starting to move up again.