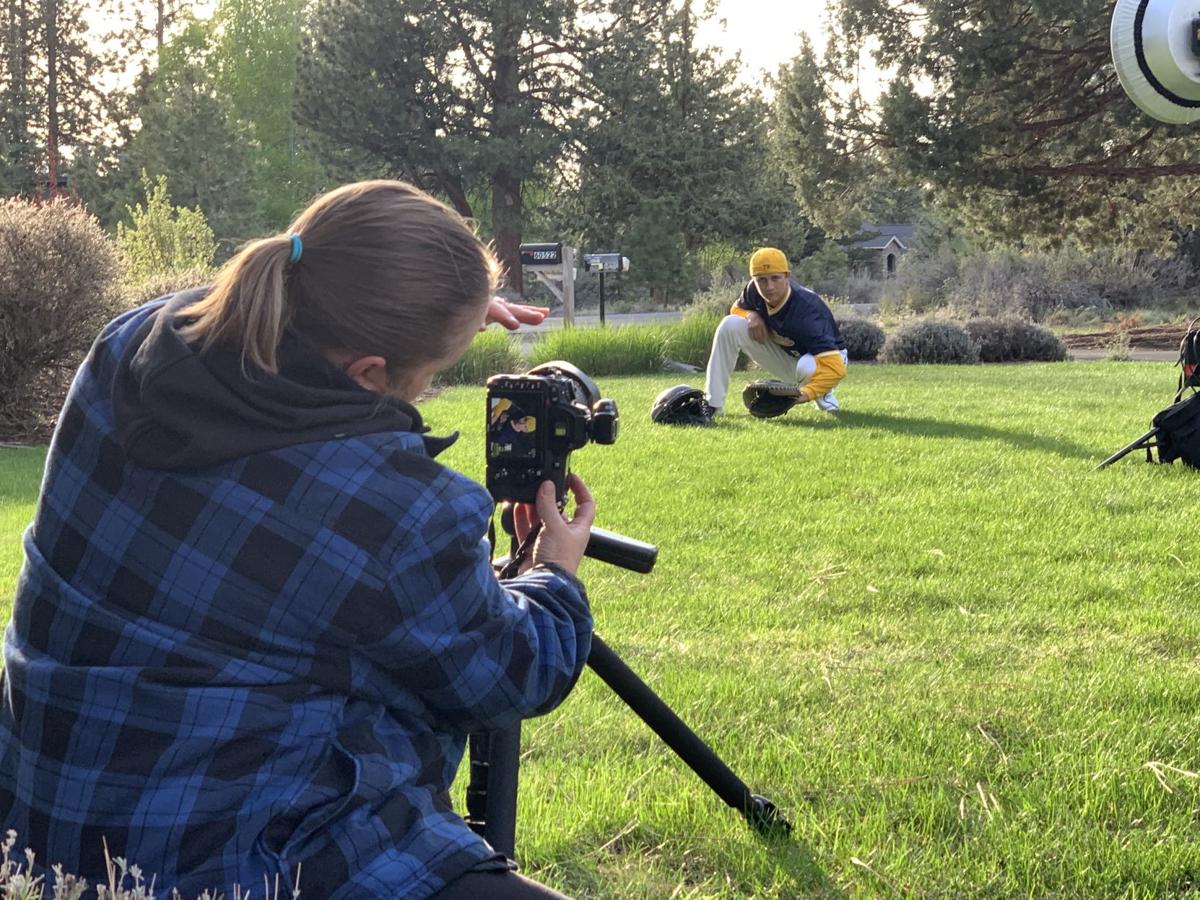 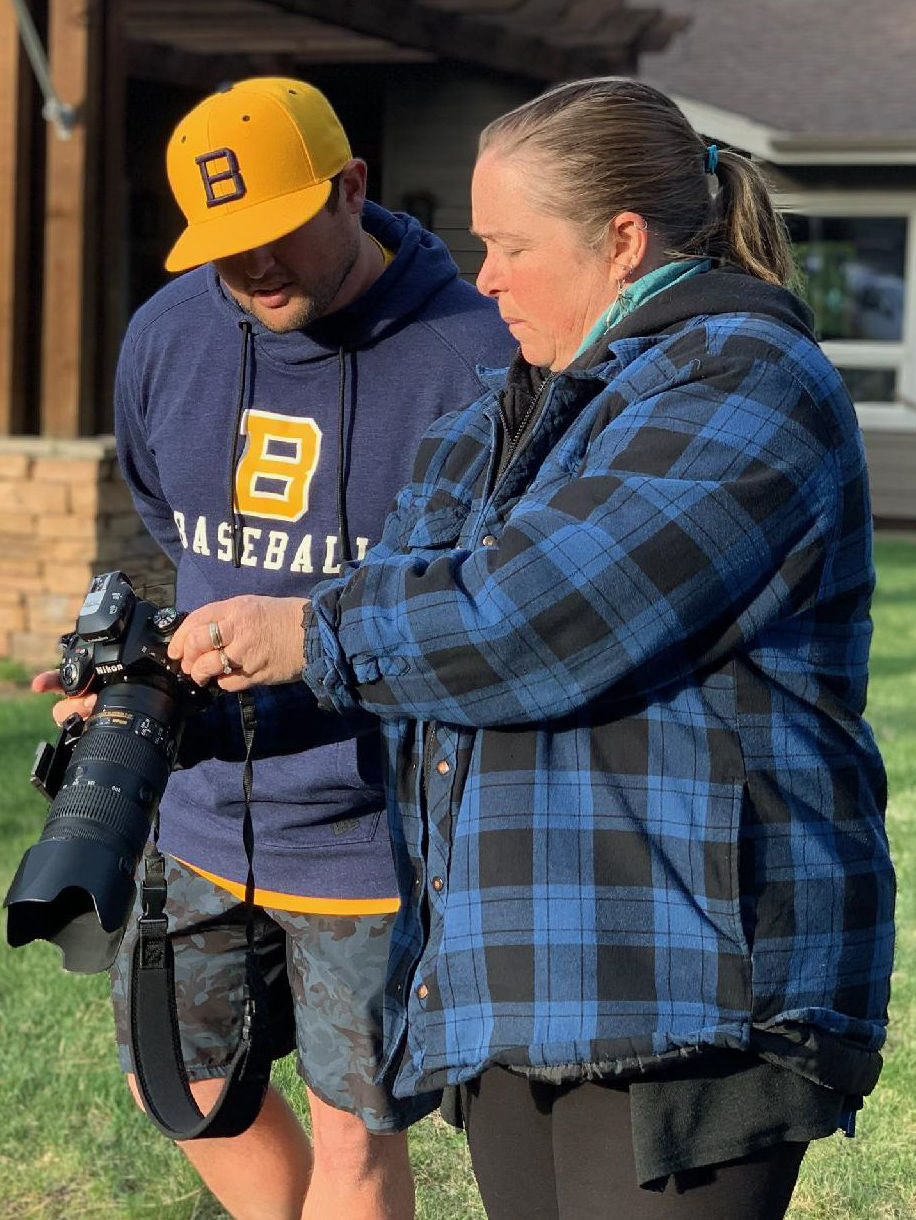 Bend photographer Kimberly Teichrow and Bend High School baseball coach Quinn Clair discuss which pictures from the socially distanced team photo shoot are best to use for Teichrow’s collage on May 4.

Bend photographer Kimberly Teichrow and Bend High School baseball coach Quinn Clair discuss which pictures from the socially distanced team photo shoot are best to use for Teichrow’s collage on May 4.

There was no high school baseball season — or any spring sport season — this year, due to the COVID-19 pandemic. But the four seniors on Bend High School’s baseball team will still have photos to remember the spring games that never happened.

In a socially distanced photo shoot Monday evening, photographer Kimberly Teichrow posed the seniors about 12 feet away from her in her southeast Bend front lawn. One at a time, Teichrow photographed the players posing in the brand-new gold and navy uniforms they’ll never wear in an actual game for the Lava Bears.

Teichrow will combine the four seniors’ photos into a collage photo. It will have a caption that reads “Undefeated,” a nod to both the players’ lack of competitive games this spring, as well as their resilience during an unprecedented crisis, she said.

Teichrow has completed similar projects for local high school lacrosse and softball teams this spring. It’s how the professional photographer of 12 years chooses to honor high school seniors who won’t get to experience their final season, she said.

“I just wanted to share them and tell the kids I’m thinking about (them),” Teichrow said. “It’s a way to put them together as a team.”

Teichrow, who was already a family portrait photographer, began her sports photography career in 2014. The year before that, she realized nobody was taking pictures of her son Max’s middle school basketball team, so she stepped in.

“Mama wanted pictures, so I got the kids together for a quick picture in fifth grade,” Teichrow said. “The next year, I thought, ‘Let’s do it for real,’ and the other teams said, ‘We want that too.’”

Since then, Teichrow has been the go-to team photographer for many youth sports teams, from Bend High School’s cheerleading squad to nearly every lacrosse team in Bend.

When the COVID-19 pandemic arrived, canceling youth and high school sports for the spring, Teichrow’s income took a hit. Sports photography accounts for half her business, she said.

But Teichrow was much more concerned about how the lack of spring sports was impacting the psyches of athletes and their families.

“I’ve never been bottom-line driven, that’s not why I do what I do,” she said. “The part that I mourn is the fact that the kids aren’t making these memories.”

She told each athlete to take a selfie, or have parents take a photo of them, in their uniforms or a high school-themed shirt. Teichrow combined all these photos into a poster, with the school’s logo and the caption, “We’d rather be playing.” Some of these will be in their schools’ respective yearbooks, she said.

Athletes and coaches on these teams said they appreciated Teichrow’s project.

“Because of Kim and her willingness to share her talents with us, the girls will still be able to be in their yearbook, and to be able to take pride in the time that they have invested into the softball program,” Sarah Stacy, coach of Mountain View High’s softball team, wrote in an email.

“I think it was pretty cool,” said Mary Theobald, a 17-year-old Bend High School senior on the Bend United lacrosse team.” It captured a lot about what our team is about, what we had for the four years we played with them.”

For the four seniors on Bend High School’s baseball team, their socially distanced Monday night photo shoot had another benefit: camaraderie. The athletes, who said they hadn’t seen each other in-person since schools closed on March 13, chatted about the new Michael Jordan documentary on ESPN and joked about how rusty their baseball skills were.

The baseball players said they enjoyed having one last photo shoot, as a memory of their lost senior season.

“It’s cool that we’ll be able to put these (uniforms) on and see them one more time, as a farewell, I guess,” said catcher and centerfielder A.J. Lovejoy.

“I’m happy we got to do it,” added pitcher Jacob Quinlan. “At least we get this — it’s better than nothing.”