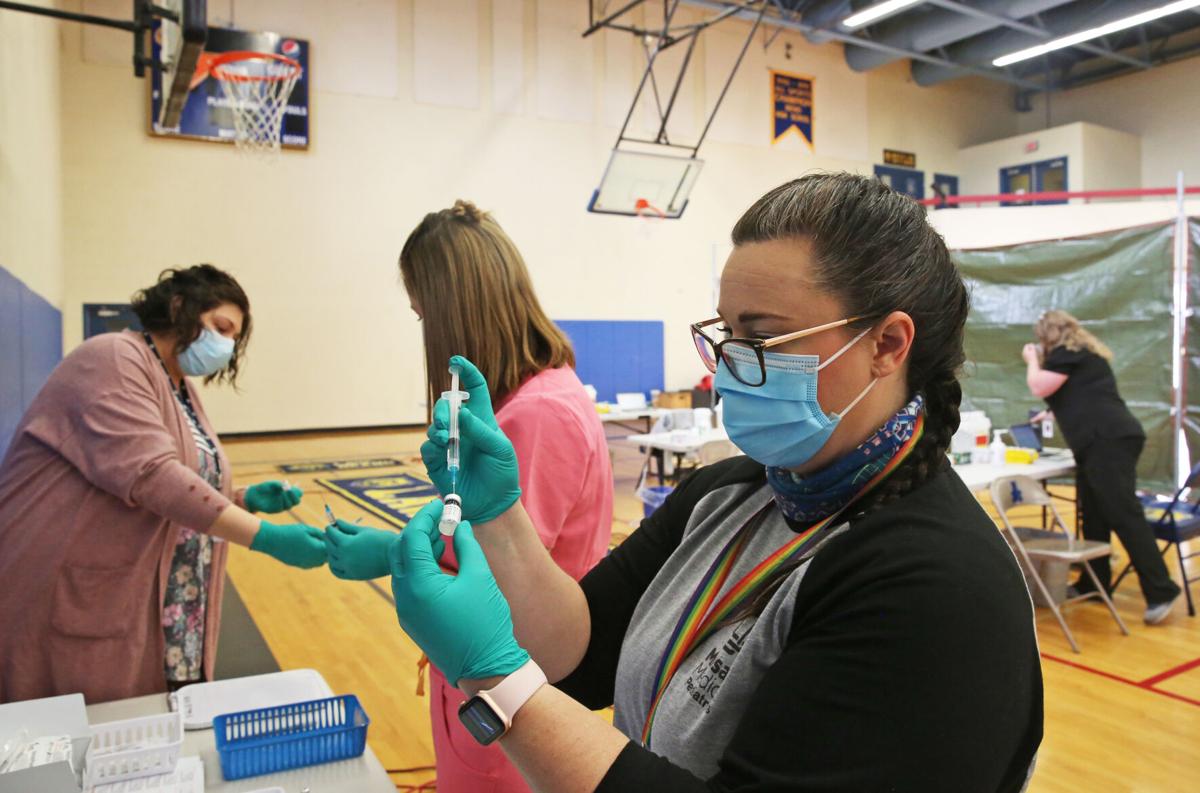 Sarah Marshall with Mosaic Medical draws up a vaccine during a COVID-19 vaccination clinic at Bend High School on Thursday, April 29, 2021. 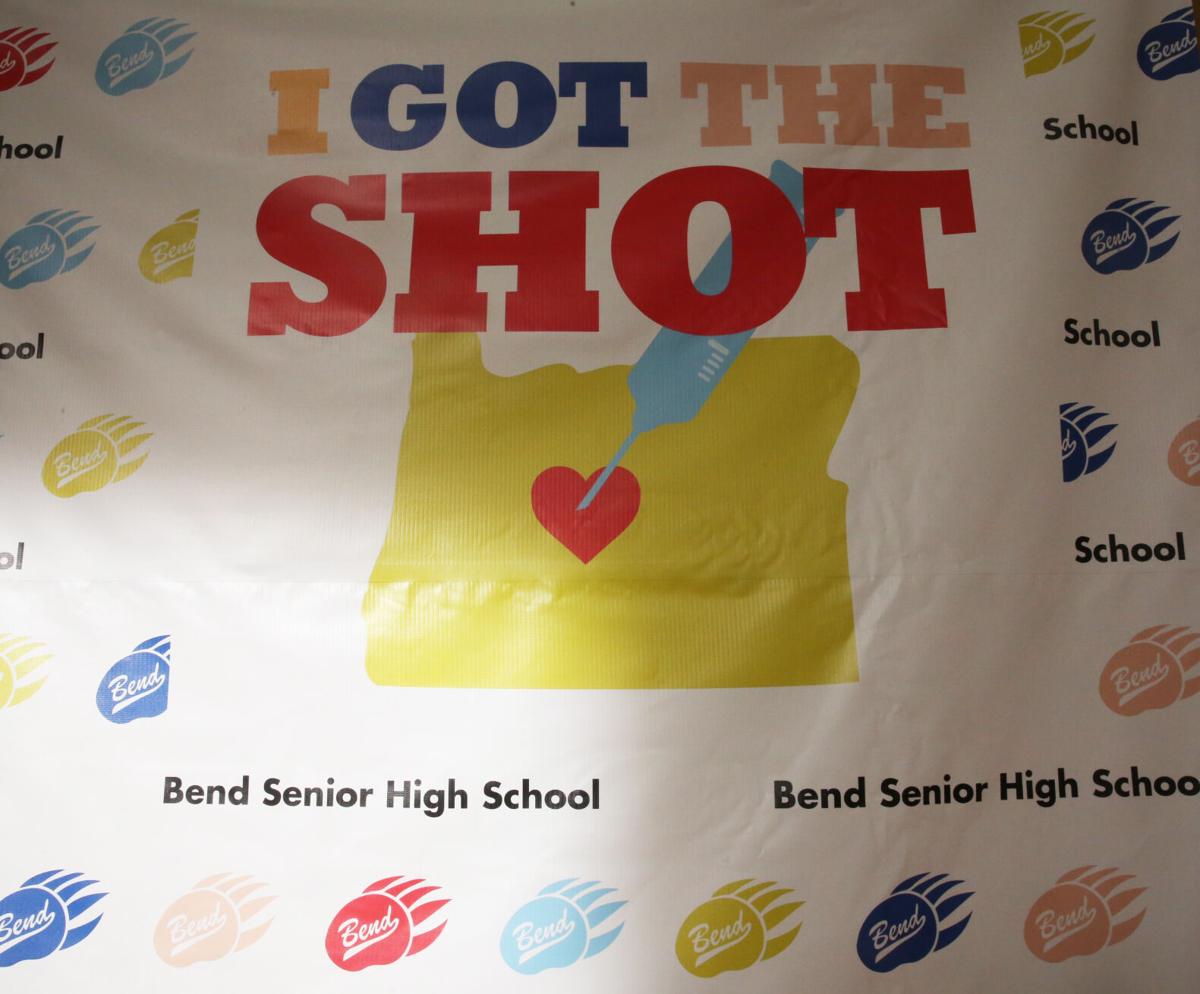 A backdrop is provided for selfies at a COVID-19 vaccination clinic at Bend High School on Thursday, April 29, 2021.

Sarah Marshall with Mosaic Medical draws up a vaccine during a COVID-19 vaccination clinic at Bend High School on Thursday, April 29, 2021.

A backdrop is provided for selfies at a COVID-19 vaccination clinic at Bend High School on Thursday, April 29, 2021.

Francisco Guevara arrived at Bend High School a little earlier than normal Thursday. The senior was thrilled — after many attempts to sign up, he was finally about to receive his first dose of the COVID-19 vaccine at a clinic inside the school's gym.

"I was so excited," said Guevara, 18. "Especially since I work in food service, I was waiting for it to be my turn."

Guevara wasn't the only one to seize the opportunity. He said half of his third period class was absent because they were in the gym getting vaccinated.

From 8 a.m. to 5 p.m. Thursday, Bend High School hosted the first in a series of voluntary vaccine clinics based in nearly every Central Oregon high school. The majority of these clinics — all six in Bend, Redmond and Sisters — will be operated by staff from local health care provider Mosaic Medical.

The goal of these clinics is to get as many local teenagers vaccinated as possible. And offering vaccines within students' own schools makes it more accessible, said Albert Noyes — a clinical pharmacist with Mosaic Medical who's helping run the high school vaccine clinics.

"If it’s convenient, they’re more likely to take advantage of the opportunity," he said.

These clinics are starting as about 5% of the Bend-La Pine Schools student body is quarantining due to being in close contact with fellow students who caught COVID-19. In the past 28 days, 95 students and staff members in Bend-La Pine have tested positive, according to the district.

Newer COVID-19 variants are more likely to affect younger people, which is why this mass effort to vaccinate local teens is important, Noyes said.

"I think it's excellent timing," he said.

Teens are by far the lowest-vaccinated group in Deschutes County. As of April 18, only 4% of residents age 19 or younger had received a single dose of the COVID-19 vaccine, according to county data. The vaccines are only approved for those 16 and older.

In comparison, about 25% of Deschutes County residents in their early 20s had received a vaccine dose.

The Bend High School vaccine clinic, located in the school's second gym, looked like a miniature version of the large vaccine clinic at the Deschutes County fairgrounds.

Seven students at a time could be vaccinated in the partitioned vaccination section of the gym. If students were nervous before receiving their shot, behavioral health supervisor Lindsey Overstreet was present to help calm them down.

Students could be eased by taking deep breaths, picking a point on the wall and intently focusing on it, or being reminded of the reasons why they're getting vaccinated.

“Most of us have a natural instinct to be reluctant to get poked," Overstreet said.

Before students left, they could take a selfie or pose for a photo in front of a large banner reading "I Got The Shot" alongside the a collage of the Bend High School logo in many pastel colors.

Thursday morning, across Ninth Street from the high school in front of First Presbyterian Church of Bend, a group of anti-vaccine protestors were yelling at students.

Morgan Schmidt, an associate pastor at First Presbyterian, said church staff was unaware that the protesters would park in their lot, and didn't condone it.

"We support everyone in their decision to get the COVID vaccine," she said. "To have anti-vaxxers hassling kids on their way to school is not who we are.”

Schmidt said she asked the protesters to move their cars from the church's private parking lot, but they refused. She declined to repeat what the protesters told her, but she said they were hostile.

Schmidt then called the police, and protesters began to scatter once officers arrived, she said.

“For kids to feel at all unsafe on church property is not something we’re OK with," Schmidt said.

Before the school vaccine clinics began, Bend-La Pine School Board members received hundreds of angry emails from anti-vaccine activists, said board member Julie Craig. Most had the exact same, copy-and-paste wording, but a few were especially nasty, she said.

Board member Carrie McPherson Douglass shared emails with The Bulletin that called the school board Nazis for allowing vaccine clinics in the schools.

"… if my child is harmed in anyway I will exact cruel and inhuman revenge," one email stated. "Mothers don't f*** around. You do not have permission to medicate or vaccinate our children without our permission, you Nazis."

In the state of Oregon, teens age 15 and older can agree to medical services — including immunization — without parental consent, according to the Oregon Health Authority.

During the Bend-La Pine School Board work session meeting Tuesday, Craig said she was furious about these hostile anti-vaccine emails.

“I’m frankly so done with it," she said. "I’m so disappointed in community members who feel that is the best way to try and have a conversation, when they don’t agree with something that we’re doing.”

This is a list of all the planned high school-based COVID-19 vaccination clinics in Central Oregon. The first date listed for each school is for first doses, and the second date is for second doses.

This is good policy by the school board and district. It is truly shameful that protestors harassed students and the church pastor and refused to leave church property until the cops were called. They are a very small but very incoherently loud minority--not at all representative of this community.