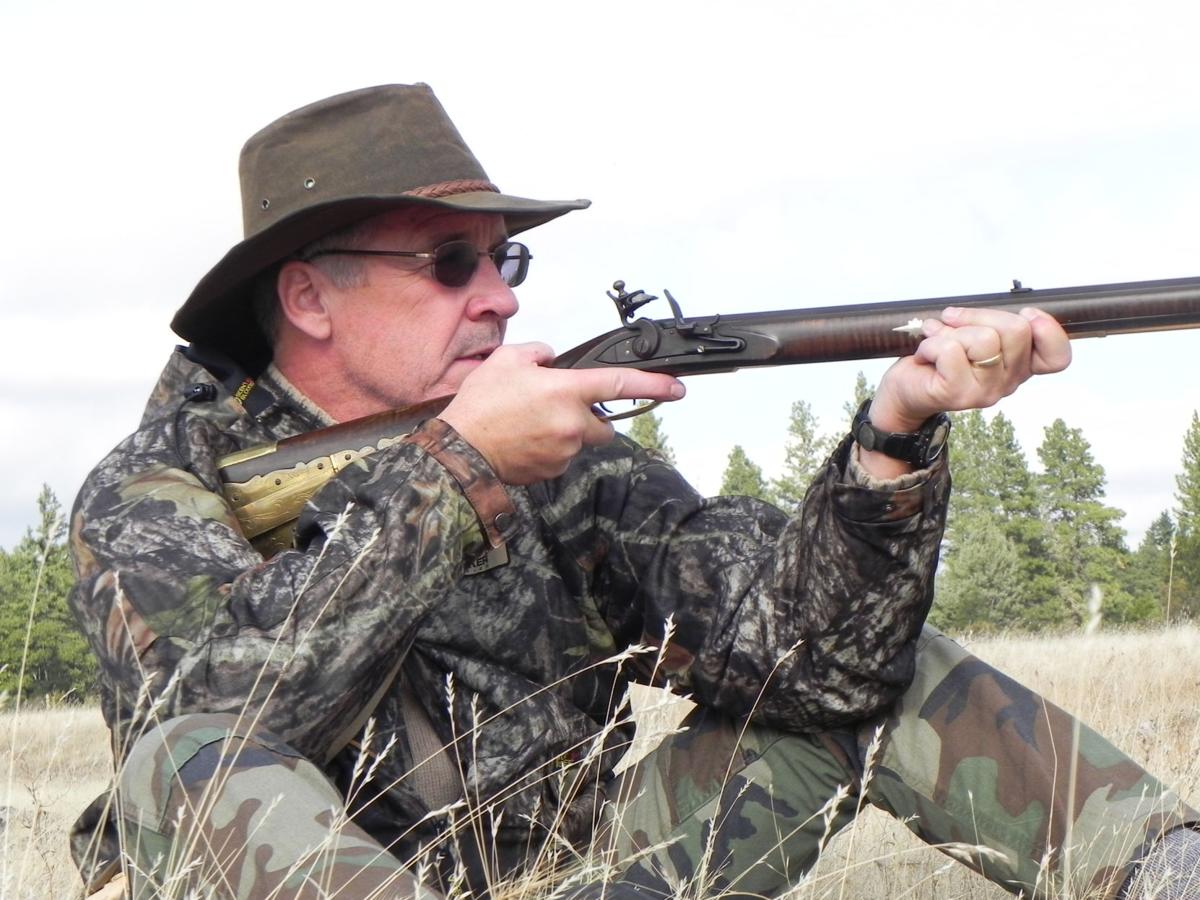 Leon Pantenburg shoulders a Kentucky rifle on a varmint hunt along a section of the Oregon Trail on the old Barlow Road near the White River crossing. 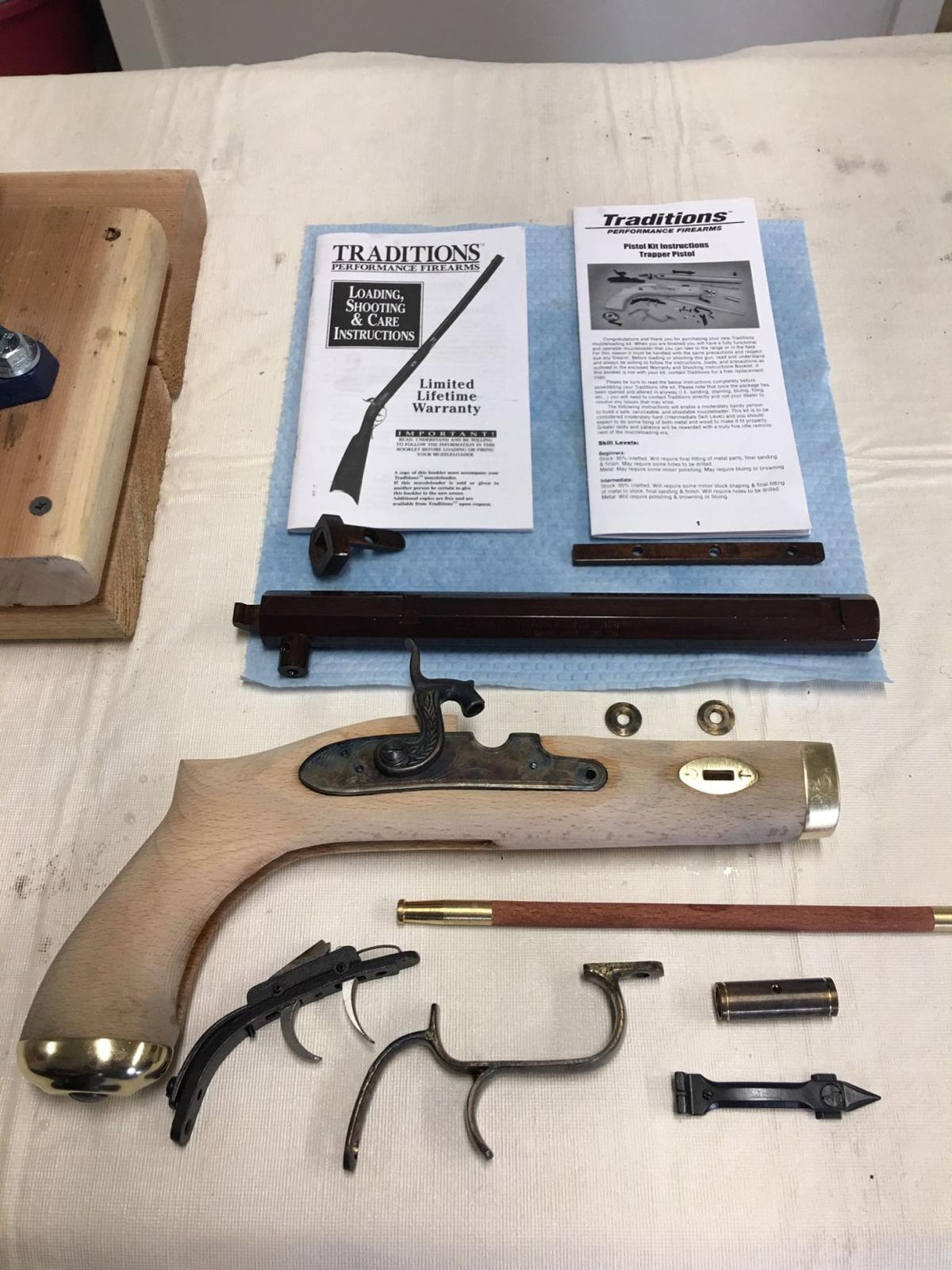 A trapper pistol kit in unfinished form, representative of the type of firearms carried in the Great Migration of 1843. Finishing the kit took approximately 14 hours. 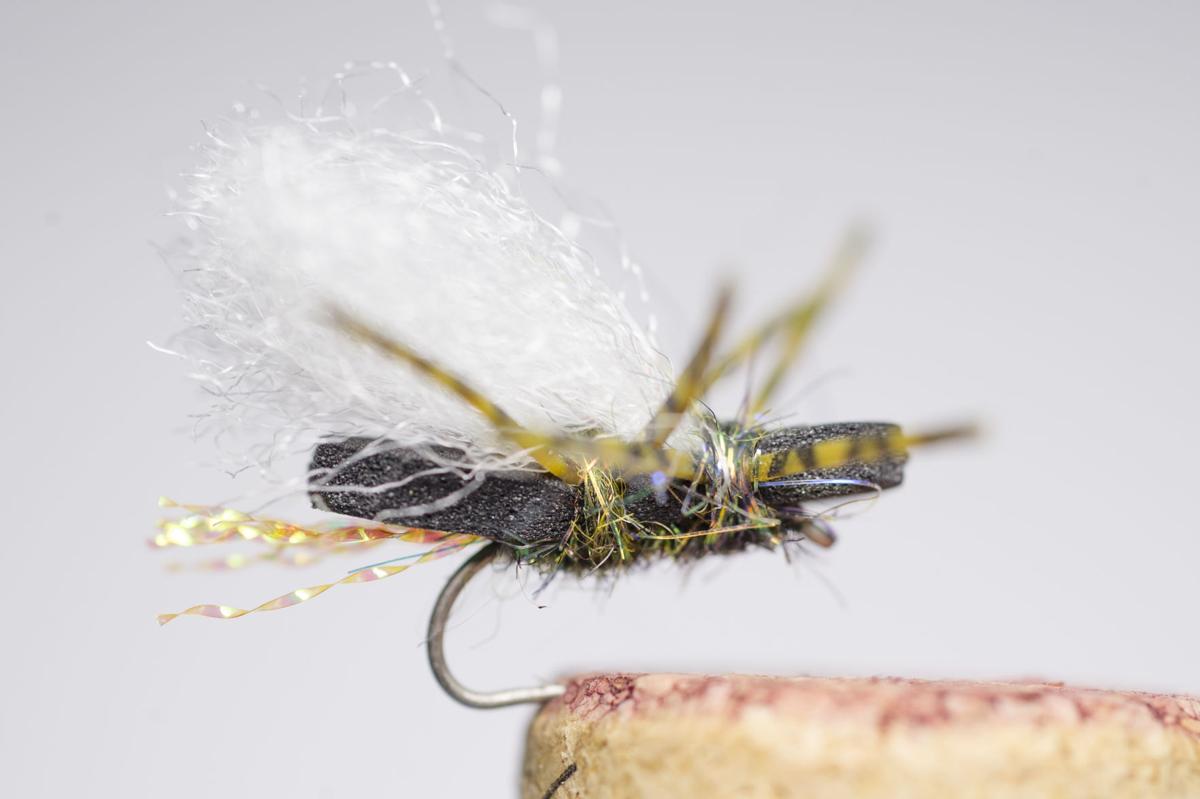 Leon Pantenburg shoulders a Kentucky rifle on a varmint hunt along a section of the Oregon Trail on the old Barlow Road near the White River crossing.

A trapper pistol kit in unfinished form, representative of the type of firearms carried in the Great Migration of 1843. Finishing the kit took approximately 14 hours.

Picture this. It's early April, 1843, and Independence, Missouri, is abuzz with an influx of middle class families who have set their sights on Oregon.

Almost every pioneer family wishes to travel well armed and if they are not, there are several gunsmiths and hardware shops stocked with the necessaries which could be purchased new or used.

For a lot of pioneers this was their first gun. Their ancestors had fought in the Revolutionary War, but by the 1840s, the average tradesman or farmer may not have owned firearms.

Amble into any hardware store in Independence, and you might see handguns behind the counter and a rack full of long guns to fondle. Smoothbore flintlocks from the late 1700s, a Harpers Ferry rifle from 1803, a Hall Rifle from 1819; both new and used Kentucky rifles with both flintlocks and percussion lock models, which were all the rage.

According to G.W. Thissell, who crossed the plains in 1850, one of the most common guns in the wagons west was a Kentucky rifle with a long, heavy barrel. Some preferred flintlocks which were seen as more reliable because percussion caps were in short supply west of the Mississippi.

In the inflated prices at Independence, a rifle would cost something like $12 and then there is the matter of powder, shot and flints or percussion caps to fill out a possibles bag. Make sure to bring enough flour, hard tack, bacon, sugar, coffee, beans, dried fruit, salt and pickles for the scurvy. If you smoke, stock a supply of cigars in your Conestoga (that's where the word stogie comes from).

Jesse Applegate was in that great migration of 1843, when thousands of families sold their farms, homes and businesses and put their belongings in wagons and drove their livestock before them.

The train that Applegate was in divided into two groups, the light wagons that would move quickly ahead, and the “cow column” which brought up the rear with the livestock.

Applegate described the experience in his book, "A Day with the Cow Column in 1843."

Sixty wagons, some 50 families and 5,000 animals slept in easily defended circled wagons and then the sun began to light the eastern sky.

"It is four o'clock A. M.; the sentinels on duty have discharged their rifles — the signal that the hours of sleep are over — and every wagon and tent is pouring forth its night tenants, and slow-kindling smokes begin largely to rise and float away in the morning air.”

Ten or 15 of the young men, off duty on this day, were tasked to a buffalo hunt. They rode away from the train and to the top of a nearby butte.

"Some dark moving objects have been discovered in the distance, and all are closely watching them to discover what they are, for in the atmosphere of the plains a flock of crows marching miles away, or a band of buffaloes or Indians at ten times the distance look alike, and many ludicrous mistakes occur.”

In these days of the COVID-19 crisis one of my diversions is building muzzleloaders. First was a trapper pistol kit from Traditions and muzzle-loaders.com, the second is a Kentucky rifle flintlock. The Kentucky rifle came to light in Pennsylvania in the 1730s, was used in the French and Indian War and by the colonist rebels in the Revolution. When Americans began to look West in the 1830s and '40s, the Kentucky rifle went with them.

With a full-length stock, a 33 1/2-inch octagon barrel and a flintlock ignition mechanism, the Kentucky rifle kit is 95% inlet and requires work with chisels, files and a lot of sandpaper. Judging by the amount of time the trapper pistol kit took, I plan to budget 15 hours to get this one right. The hardwood stock looks like a blank canvas and I may turn this into an Oregon Trail commemorative with a Conestoga wagon carving against a Mount Hood backdrop. That would likely add another 10 hours to the project.

A gun like this should be put to use.

After an average of six months on the trail, the weary travelers limped into places like The Dalles, Oregon City and Eugene City, which were little more than camps in those days. As soon as shelter was up, it was time to put meat on the table.

Corona or no corona, we are closing in on the May 15 controlled hunt application deadline.

To replicate one of those early pioneer hunts with a Kentucky rifle, open the Oregon Big Game Regulations. Any of the west side 100-series muzzleloader hunts (page 33 in the regulations) takes hunters to the places where the pilgrims of 1843 left their tracks. The 100M hunt offers a long season with 880 tags available in the drawing.

Two easy-draw elk hunts include the NW and SW Cascades seasons. Hunt in November to get the full experience, in the rain, in buckskins and worn-out shoes.

Don't miss the May 15 controlled hunt application deadline. Keep your powder dry and your flints sharp.

Beginning in June, ants, beetles, hoppers and crickets may be on the menu. The Peacock Chubby is a good choice when no other hatch is in evidence and trout are opportunistic. And the foam-constructed dry is a good place to hang a dropper, perhaps a tiny Lightning Bug or a No. 16 Pheasant Tail.

Fish the Chubbies in lakes when the fish are cruising, actively hitting the surface. Prospect with the Peacock Chubby Chernobyl, especially for cutthroats in Snake River tributaries and for high lake brookies.

Tie the Peacock Chubby Chernobyl on a No. 8-14 dry fly hook. For the tail, use peacock Krystal Flash. Wrap the thorax with UV peacock Lightning Dub. Shape the over body with black 2mm foam. For the rubber legs, use speckled olive. Finish with white poly wing and rubber antennae.