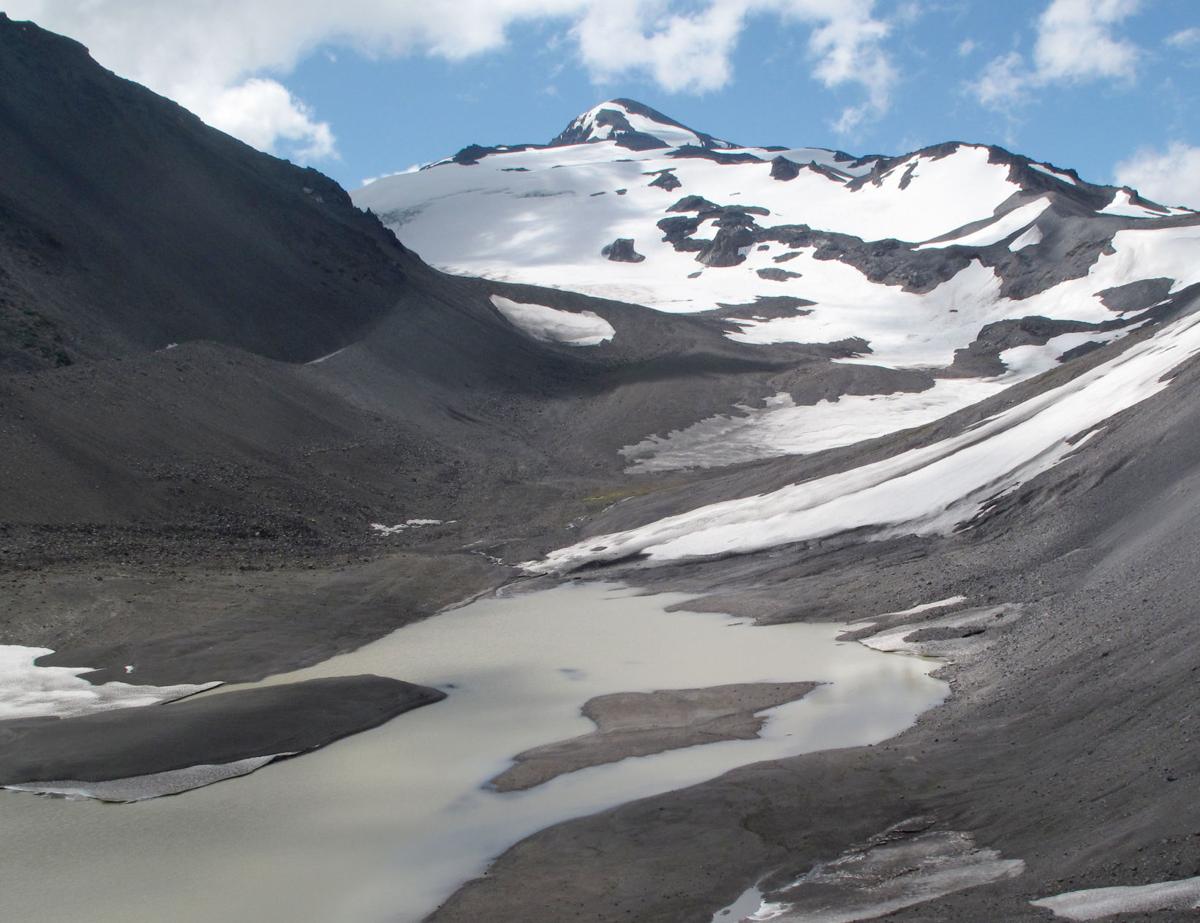 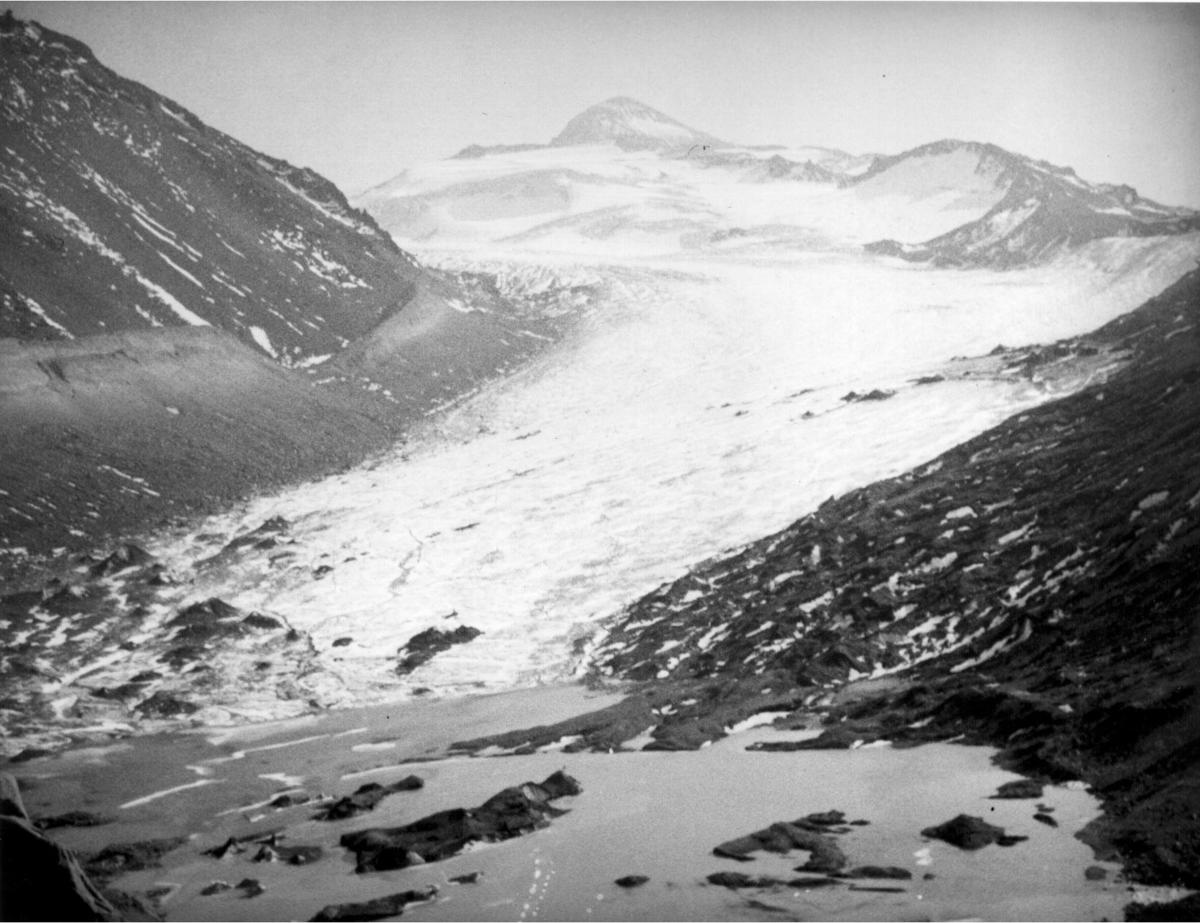 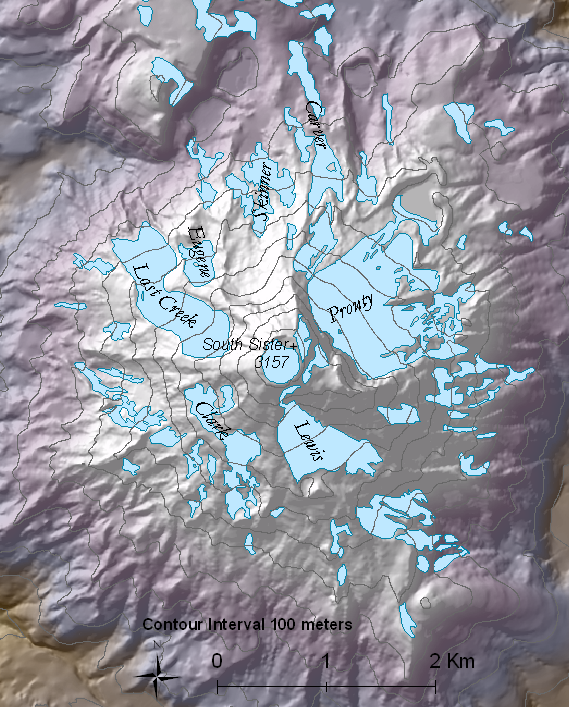 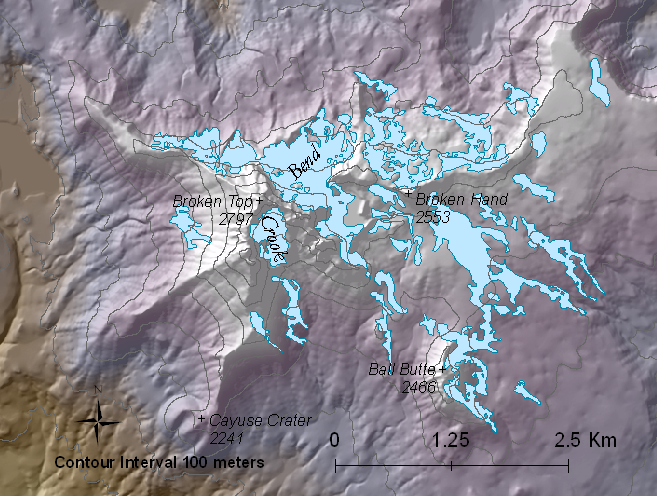 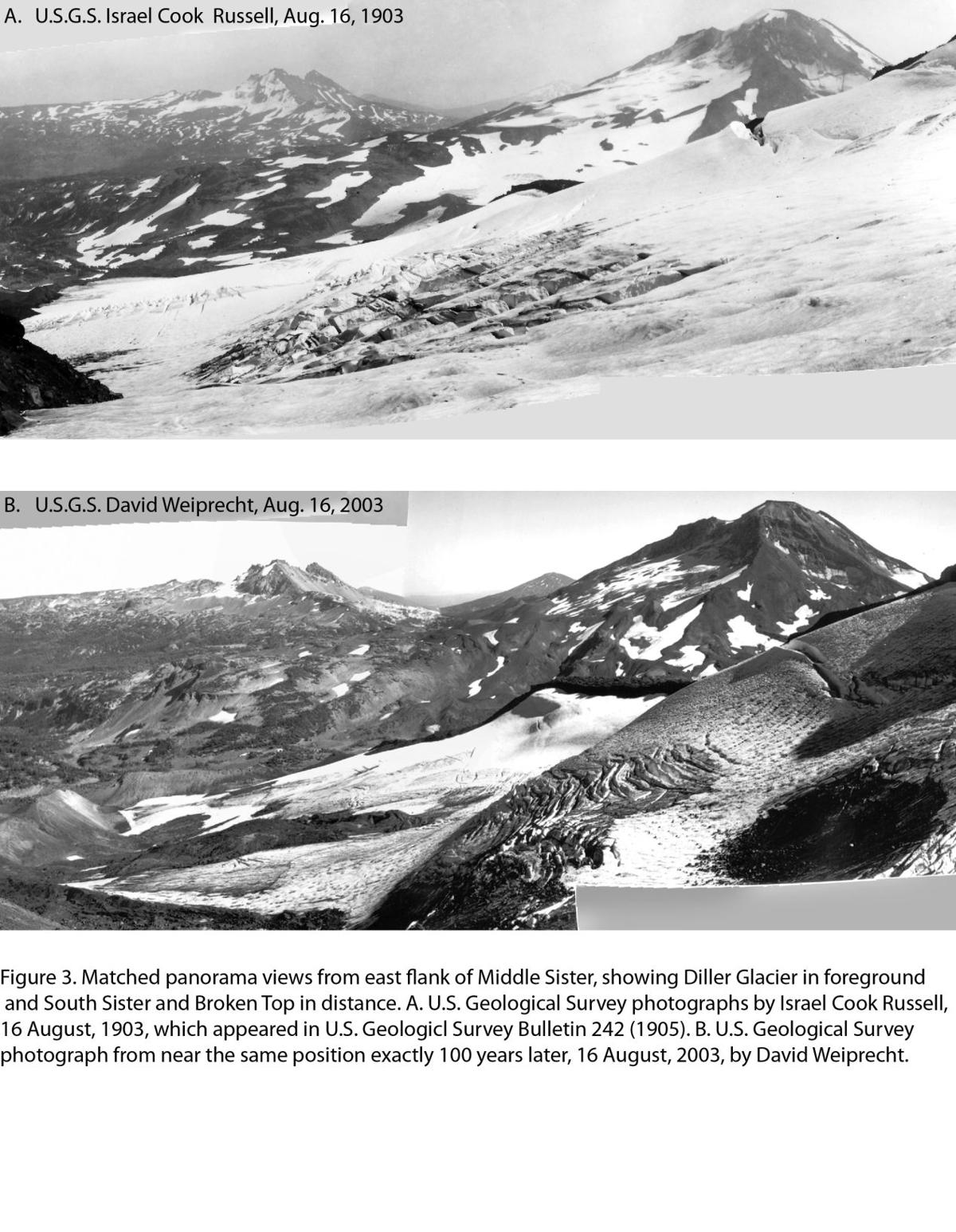 Diller Glacier on the southeast slopes of Middle Sister is shown in 1903 (top) and 2003 (bottom). 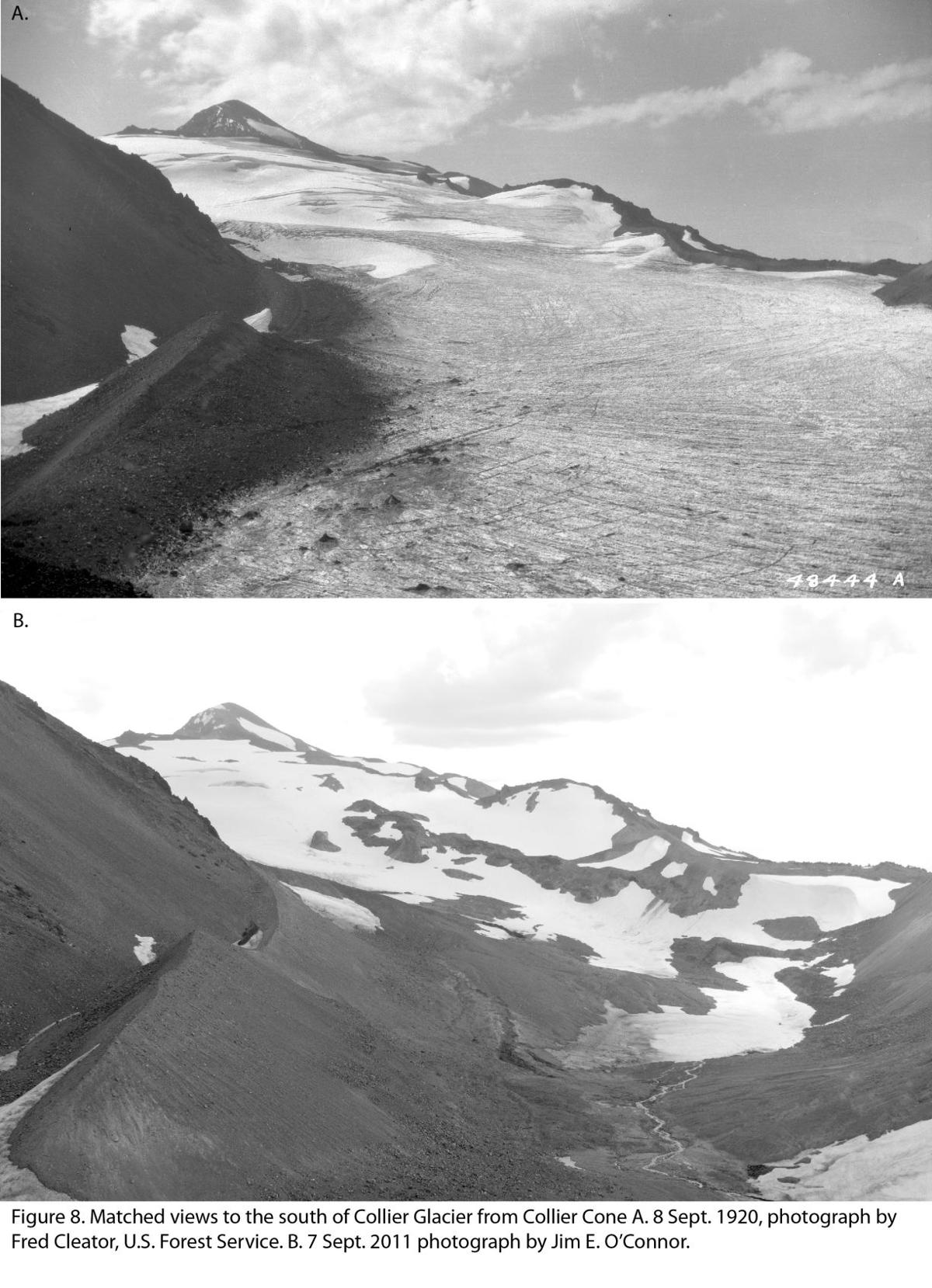 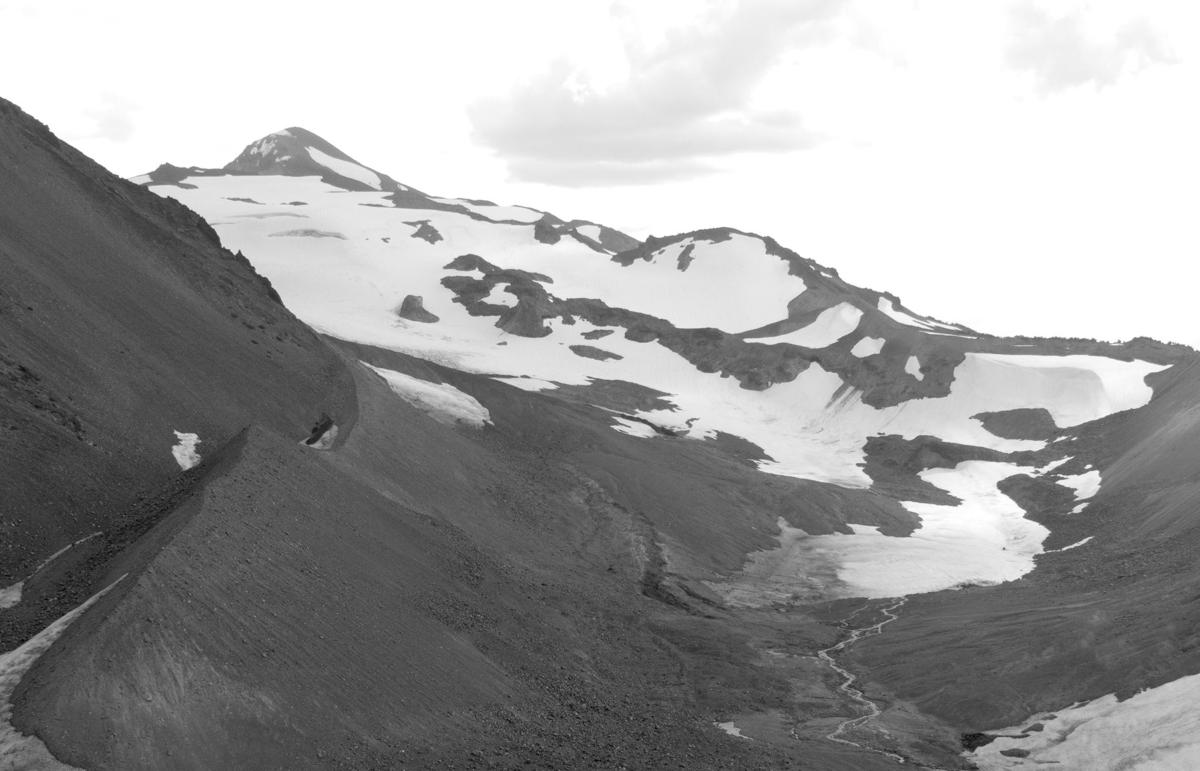 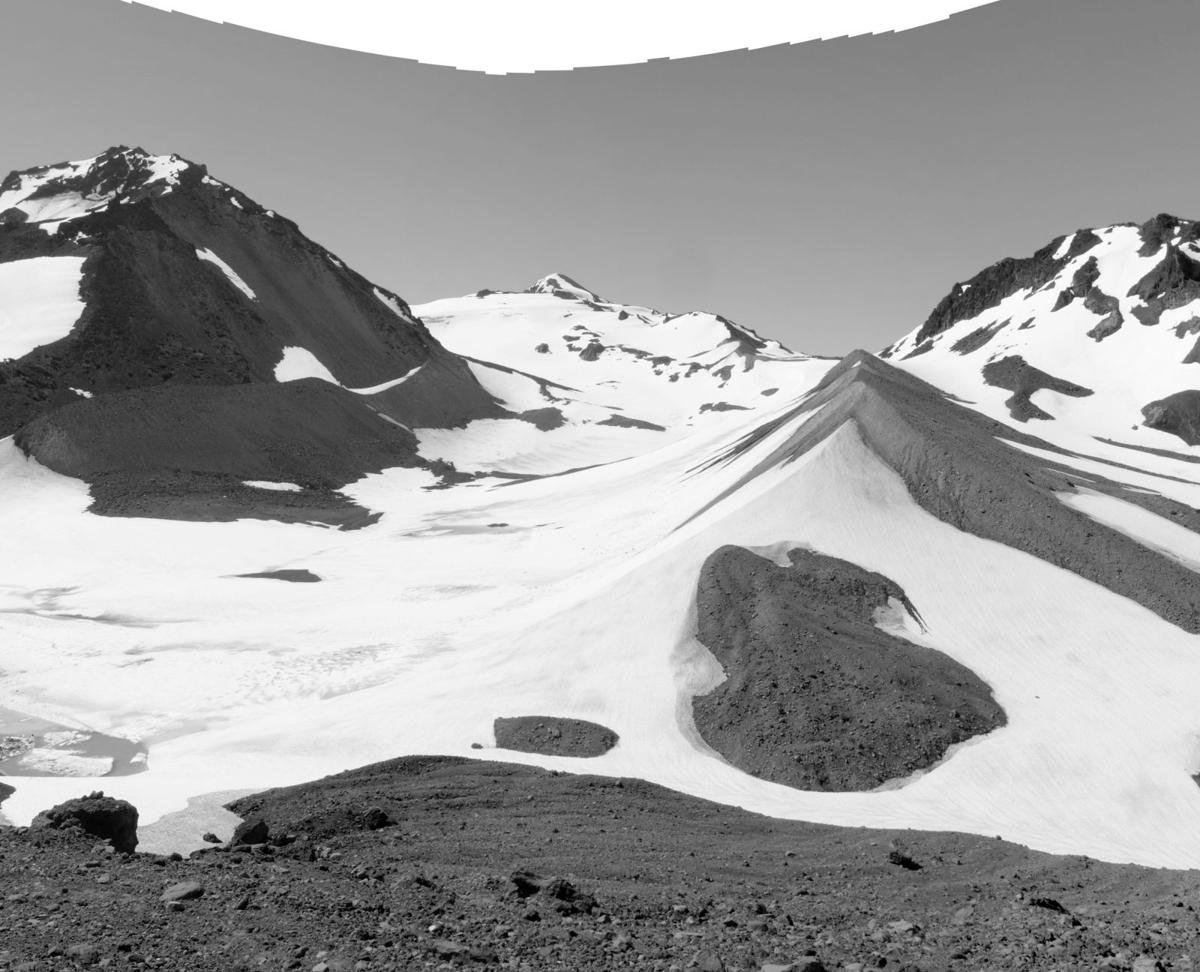 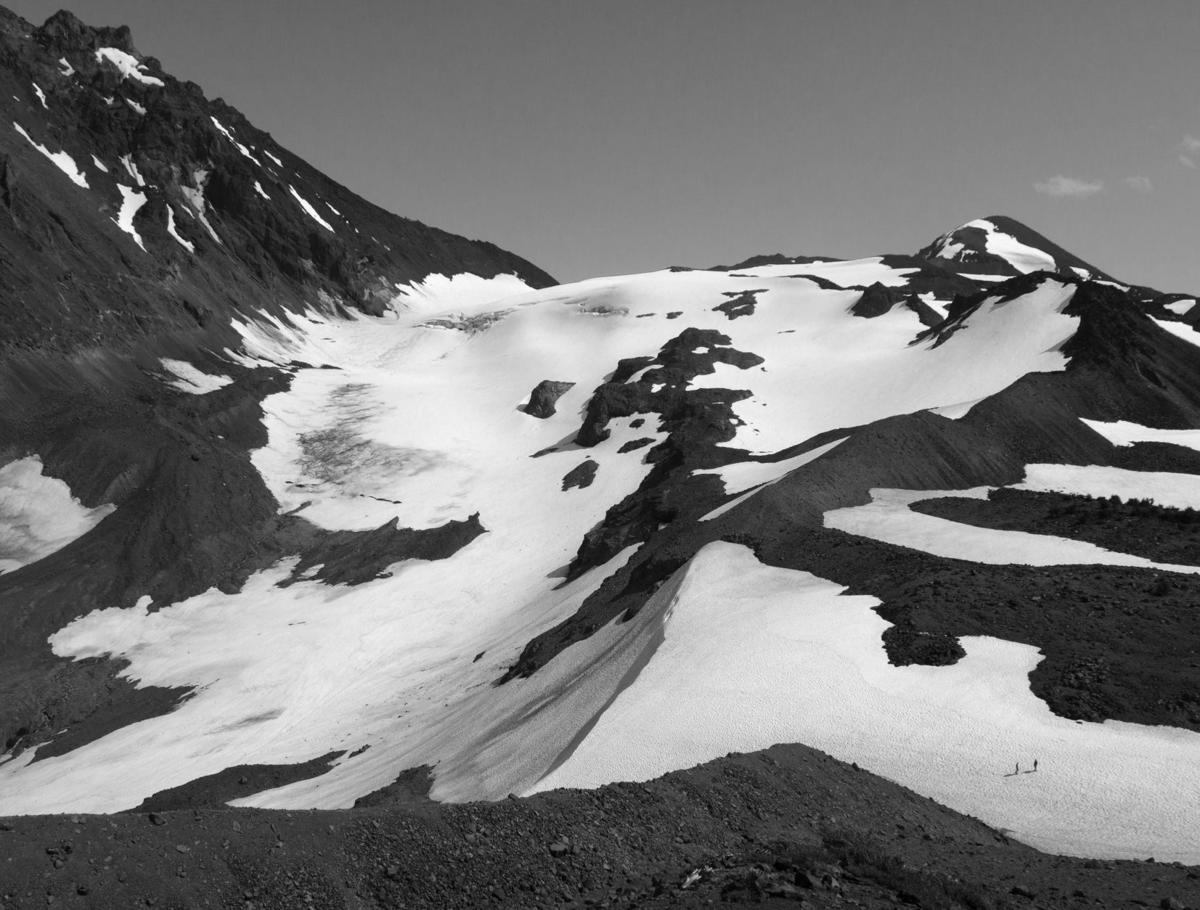 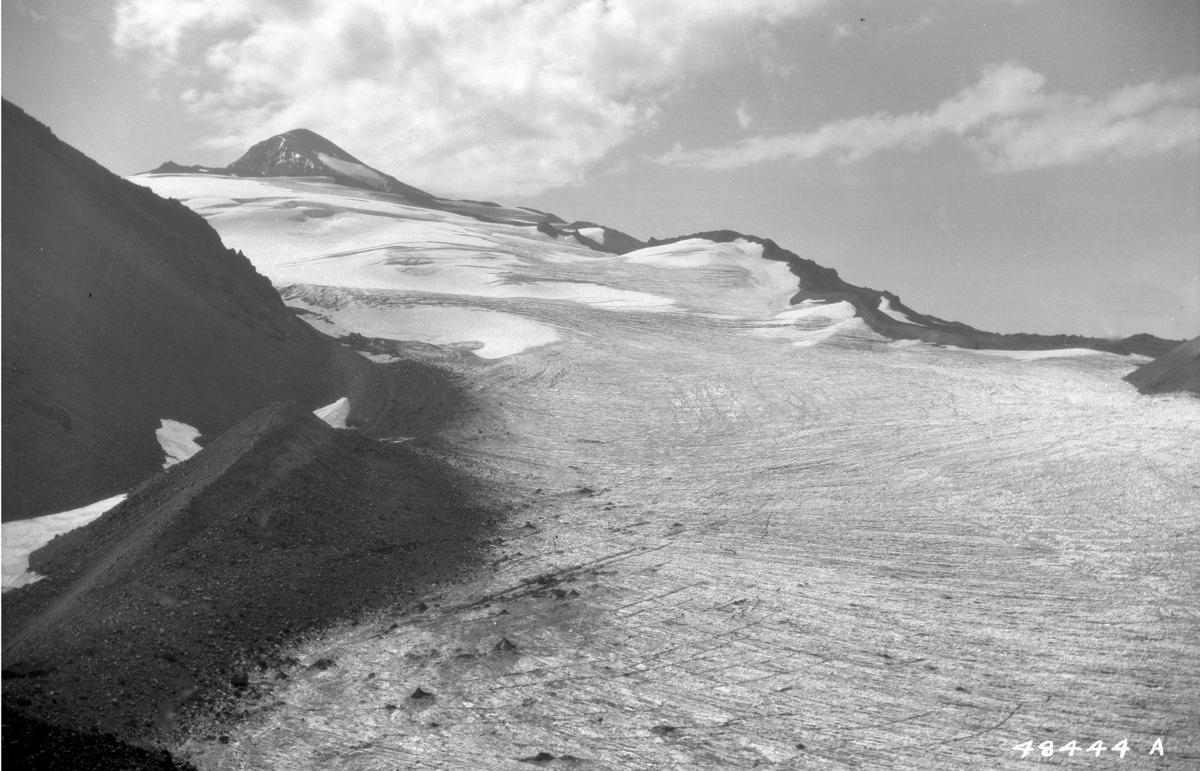 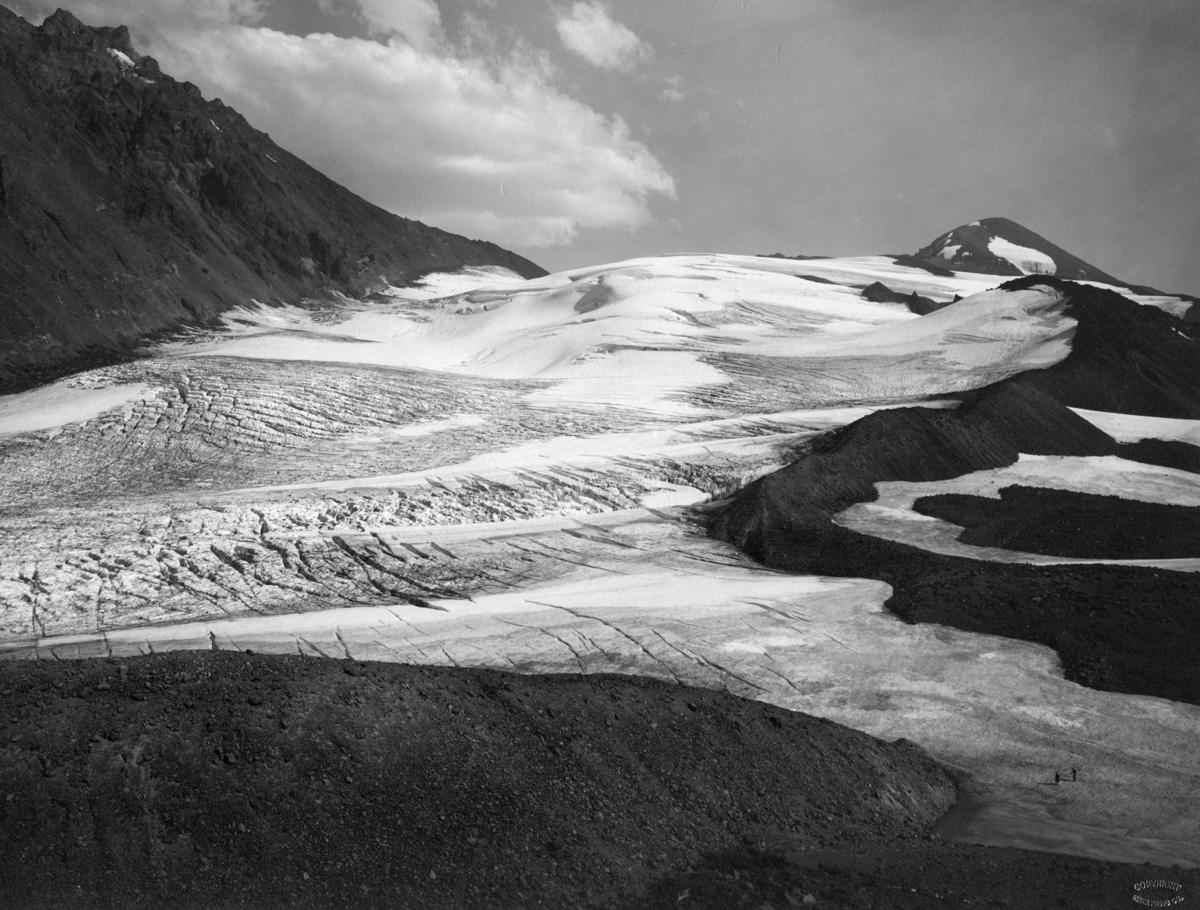 Diller Glacier on the southeast slopes of Middle Sister is shown in 1903 (top) and 2003 (bottom).

When Peter Keane started running mountaineering tours in the Cascades 30 years ago he helped climbers summit peaks well into August. These days he has to stop running his trips in early July due to the glaciers melting away in the summer sun. It’s simply too dangerous to trek up the melting glaciers due to loose rock and snow.

“We have lost of a month of the climbing season in the Oregon Cascades because of the melt off,” said Keane, the co-owner of Timberline Mountain Guides Inc., a Bend-based mountaineering company. “Back in the ’70s and ’80s, it could go much later into the summer.”

Keane and his crew of trekking guides are witnesses to one of the most tangible impacts of climate change — the disappearance of glaciers.

The glaciers are “interesting and majestic and to see them go away has been hard to swallow,” Keane said. “It’s definitely happening. You can see the lower part of the glacier moving slowly uphill year by year.”

In Oregon, glaciers provide opportunities for trekking and skiing, but they also affect the local water supply by stabilizing the snowpack and regulating the flow of water through the year.

Enjoy their benefits while they last, say Oregon scientists, because climate change is pushing them toward extinction.

“Glaciers are a real tangible indicator of the climate,” says Andrew Fountain, a professor of geography and geology at Portland State University. “If they are retreating, you know the climate is getting warmer, and then you can think about all the effects, if glaciers are staying position, then the climate isn’t changing.”

There are more than 460 glaciers or permanent snowfields in Oregon, with 36 of them named. Most of them are on Mount Hood, Mount Jefferson and the Three Sisters.

Close to Bend, hikers enjoy the walks alongside Bend Glacier and Crook Glacier, both on Broken Top. Heading up to the summit of South Sister, climbers will encounter Lewis Glacier. The Collier Glacier between North and Middle Sisters has notabl y retreated.

Glaciers are essentially rivers of ice that move under their own weight, pushed downhill by new snow that accumulates high in the mountains. They form when the amount of snow exceeds the loss by natural melt off. Their mass has extraordinary power, able to slowly push rock and boulders, even forming dams that can create mountain lakes. Their movement creates crevasses, large cracks the develop in the ice that can exceed 100 feet in depth.

Most glaciers have been visible near the tops of Oregon’s mountain peaks since the last Ice Age, which ended 12,000 years ago. They have gone through periods of advance and retreat, slowly carving up the valleys and mountains into the shapes we can see today.

They are all shrinking again. In the past 10 years, some have retreated up to a quarter of a mile and lost 20 to 30 feet of thickness, Fountain said. Their loss will disrupt the way water moves through the mountains, creating more snowmelt in the winter and less in summer when it’s needed most.

“Glaciers are a signal of our snowpack,” Fountain said. “The more they disappear, the less snow we have. And the less snow, the less water. And that is going to be a problem.”

In the early 1900s, the Mazamas Mountaineering Club started documenting the glacier retreat with photographs. What’s different now, scientists say, is human-made influences are increasing the rate of glacial loss.

Oregon’s glaciers are less than half the size today compared to their mass in 1900, and their rate of retreat has accelerated in recent decades.

“Our temperatures have been getting warmer, such that the glaciers melt more in the summer, and in the winter, they don’t get quite as much snow as they used to, so its a double whammy for these glaciers,” Fountain said. “That is why they are retreating as fast as they are.”

A handful of glaciers have disappeared completely, though not necessarily due to human-caused climate change.

A glacier once covered a portion of Mount Bachelor. Known as Dutchman Glacier, it was located on the northwest side of the mountain and retreated to an insignificant size by the 1940s. A glacier on Diamond Peak was once the southernmost glacier in Oregon. It has also gone the way of the dodo.

“Retreat of both these glaciers was likely due to natural fluctuations, but they do tell a prescient story of how difficult glaciers are to rebuild once they’re gone,” said Larry O’Neill, a faculty member with Oregon State University’s Earth, Ocean and Atmospheric Sciences Department.

Will humans still be able to marvel at Oregon’s glaciers in the 22nd century? That’s becoming unlikely, said Fountain.

“By 2070 and 2100 they are largely going to be gone,” said Fountain. “The only glaciers left will be those that are really high up, like those on Mount Hood, but most on the Three Sisters will be gone because they are relatively low elevation.”

He adds a caveat. “If we can stop the rise of greenhouse gases, we will still have the glaciers, just in a slightly smaller size.”

Gordon Grant, a Corvallis-based research hydrologist with the U.S. Department of Agriculture Forest Service, said the retreat of the glaciers over the past century has been nothing short of dramatic.

“A hundred years ago, you might have been standing in a place looking at up at ice, and in that place now, you are looking down at the ground, and in some cases, losses of hundreds of feet vertically are apparent,” said Grant.

Grant said the loss of the glacial ice has been particularly sharp in the past 30 to 40 years, largely driven by human impacts.

“It’s not the movement of any single glacier but the broad trend of glaciers in many different places that give confidence that this is not driven by local changes in precipitation and temperatures and but by the global kinds of changes that are indicated by all the climate records and models,” said Grant.

Scientists anticipate that the impacts of global warming on glaciers in the Pacific Northwest could accelerate glacial losses in the coming decades.

“Scientists do not wish to be proven right about how quickly the climate is changing and to view the negative impacts on both humans and Earth’s environment,” said O’Neill. “It would be tragic if we continue to ignore the warnings that nature is providing us that our actions are unsustainable.”

The loss of Oregon’s glaciers will have wide-ranging effects. For outdoor enthusiasts and tour companies, the risk is losing a slice of nature. But glaciers also improve conditions for people enjoying the rivers closer to Bend. Kayaking, boating, fishing and other watersports depend on summer melt from glaciers, and improve conditions in the rivers, said O’Neill.

There are possible impacts on Oregon’s forests too. Smaller glaciers and lower snowpack can result in soil moisture stress, says O’Neill, which can change the lifespan of trees and the composition of forest vegetation. The result is increased wildfire danger, as well as lower timber yields for the logging industry.

Glaciers and large snowpack also improve water quality and help preserve the crystal clear water that flows through taps across Central Oregon. They help by extending mountain runoff into the drier seasons, which benefits municipal water users and irrigators.

Keane, the climbing guide, said it’s disheartening to see the glaciers retreat over the years, but it’s just as frustrating to speak with people who deny it’s happening.

“That is the toughest part,” Keane said. “To know that it is happening and hear people who think it’s not happening. But they probably don’t live near the snow to see the permanent snow lines fluctuate.”

Is it too late to save Oregon’s glaciers? Based on recent historical data their lifespan may be coming to an end. Once they are gone they take decades or longer to reform. But O’Neill says humankind can still make a difference. Limiting global warming by reducing carbon emissions in a meaningful way would be a good start, he said.

“Awareness of the importance of glaciers and how they are changing is the first key step to address the problem,” said O’Neill. “Addressing the human role in climate change will be necessary if we are to slow glacial retreat or restore them to a more natural state.”

That glacier on Diamond Peak was not the southernmost in Oregon. That distinction belongs to the small Lathrop Glacier on the northern side of Mount Thielsen. It's in a protected area that gets little to no sunlight.

Be afraid. Be very afraid.