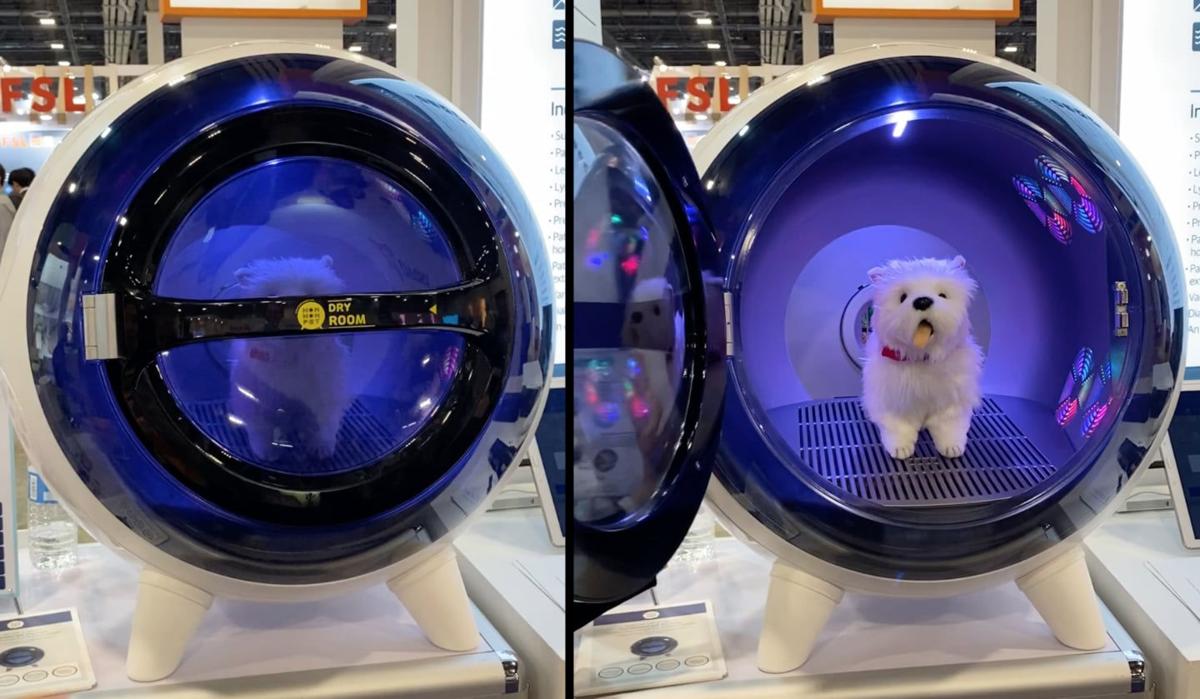 The Homhompet is a dryer for small wet pets who are

OK being confined in small places for five minutes. 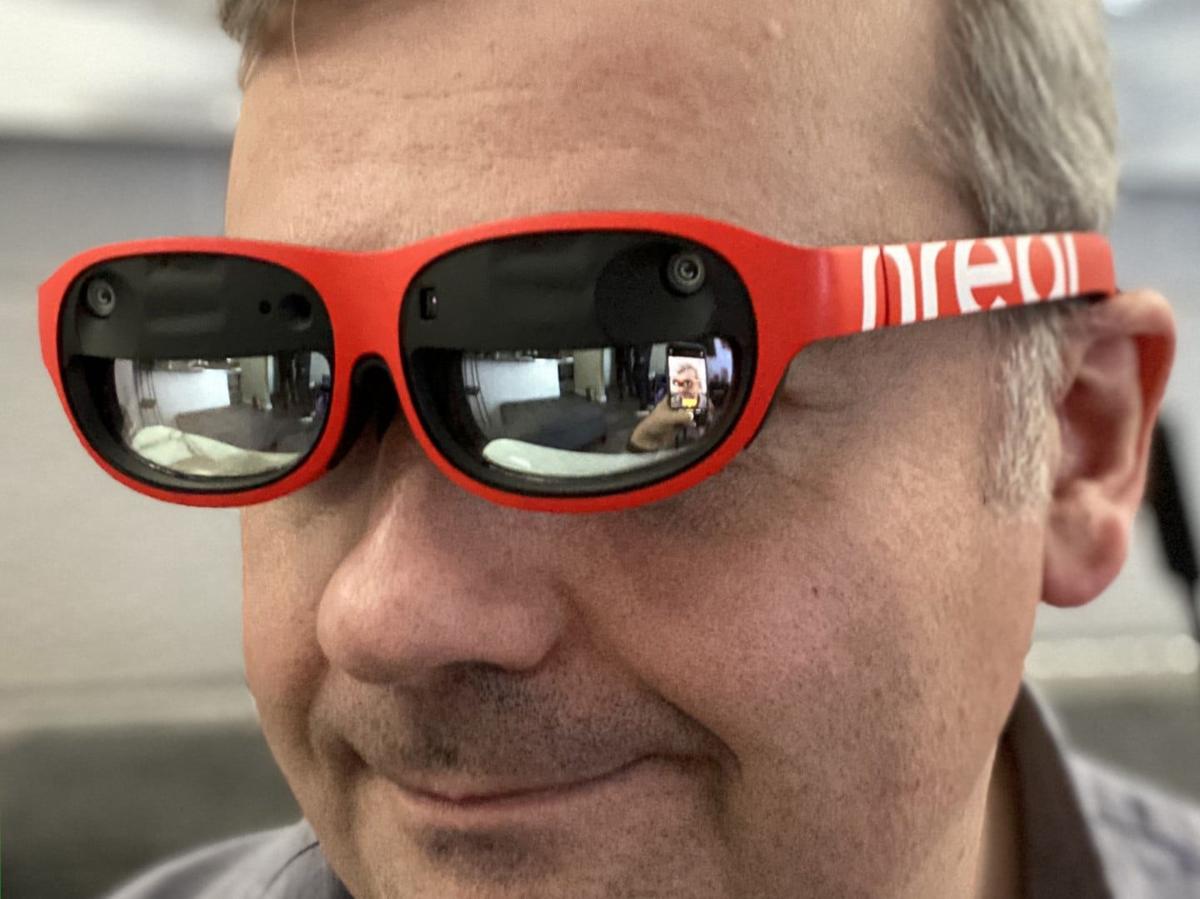 The Homhompet is a dryer for small wet pets who are

OK being confined in small places for five minutes.

Wandering through the miles of CES exhibitors this year was the usual mix of inspiring, confusing and hilarious. The consumer tech industry’s biggest annual showcase combined lofty visions of the future, including electric self-driving cars and exoskeletons for baggage handlers, with smaller and much weirder ideas, like an exercise machine for cats.

CES is huge — 2.9 million square feet, to be exact — but it’s no longer where the most influential tech products launch. Tech giants like Apple, Google and Amazon save the real stuff for their own events in the spring and fall. Still, we walk miles at CES each year to hunt for emerging ideas, practical new gadgets, adorable robots and you-gotta-see-it-to-believe-it tech. (We’re looking at you, people-moving egg.)

A few trends got us excited. Laptops are getting interesting again, thanks to new “foldable” technology that lets OLED screens bend and hinge. TVs are getting the ability to fix their own darned picture settings, finally. Fake meat is branching out in new directions. So are “artificial humans,” virtual avatars with whom we’re supposed to interact as if they were the real thing.

CES is also useful for tracking progress on long-promised but still nascent technologies, including self-driving cars, artificial intelligence and augmented-reality glasses. The TV industry, the single largest exhibitor at the show, is pushing ahead into its latest reason to get you to upgrade: 8K TVs, which have four times as many pixels as ultra-HD 4K TVs.

There are also trends we hope go away, such as companies using fear to sell dubious security and health gadgets, and casually integrating surveillance into everyday things. We’re also not a fan of “privacy-washing” — when tech companies market privacy features but continue gobbling up our data like a hungry, hungry hippo.

Our CES favorites are usually the products that make you go “hmmmm.” Seeing what problems we’re trying to solve with tech reveals as much about us as it does the state of the art.

As this year’s event winds down, here are our finds for the best, most noteworthy and weirdest products of CES 2020.

This year’s CES was littered with “smart” home-surveillance cameras.

Companies from around the world showed up to shill internet-connected cameras for outside houses, on doorbells, inside living rooms and kitchens, above sleeping babies and on the ground to watch pets. For the person with an entire estate to protect, there’s Sunflower, a home-security system that can fly a drone and capture intruders on camera. The system starts at $10,000 and uses outdoor lamps outfitted with motion sensors to detect people, animals or cars around a home.

$10,000 and up, available for preorder now and shipping this summer.

Saying something “smells like a wet dog” is a common insult. The solution for real wet dog smell is, drying said dog. Sure, you can use a towel or a hair dryer, or you could shove your damp pet into a circular drying and sterilization chamber and shut the clear door for five minutes while he or she stares at you in horror. The Homhompet dry room is designed to be minimally stressful — it’s quiet, doesn’t blow air too hard and includes soothing colorful lights inside. The version shown at CES is only big enough for one of those small dogs that fits in a tote bag, or an extremely docile and trusting cat.

Homhompet will cost $1,400 and be available later this year.

Delta is an airline, not a technology company. That didn’t stop it from having a huge presence at CES this year, where it announced a number of tech-related products and experiments. Delta announced a machine-learning platform that it will use to help make decisions when things go wrong. Instead of human employees trying to reroute planes or change schedules in bad weather, the system will suggest the best solutions based on data Delta has accumulated from past delays and disruptive events, like volcano eruptions.

Delta will launch its AI tool this spring.

We’ve been hearing the future is face computers for nearly a decade. That hasn’t happened, but the technology to bring AR to our glasses is improving. The Nreal looks almost like a normal pair of sunglasses — except for a long cord slithering down to a smartphone that does the processing. Nreal has managed to squeeze an awful lot into a comfortable, lightweight 3.1-ounce form, including front-facing cameras that help it locate virtual objects in a room, and an operating system that overlays nearly any Android app on top of the world around you.

From most talking tech, you expect clear answers to your queries. From this one, you mostly get nonsense. And that’s entirely the point: Bocco Emo is an emotional support robot. It listens to what you’re saying, and responds with an emotionally appropriate coo, chirp or gurgle. Its mechanical head also bobs up and down with empathy. Say what? Its Tokyo-based maker Yukai Engineering, also known for a headless robot cat with mechanical wagging tail called Qoobo, thinks robots can play important roles in human emotional lives as we face isolation, especially in aging societies.

Price to be determined, shipping in May 2020.

The folding-screen design trend we first saw in phones is spreading to laptops. After teasing the idea in 2019, Lenovo is ready to start shipping a 13-inch laptop with a seamless screen that closes up like a book. Lay it flat like a tablet, or prop it up at a right angle like an adorably tiny laptop.

It was the sex toy that launched a thousand articles when its CES innovation award was revoked last year. After a little introspection and a lot of outside pressure, CES is allowing sex-tech products in the show. The Osé is back, a uniquely shaped robotic massager that doesn’t vibrate, along with two other similar products. The drama opened the door for more sex-tech players, around a dozen by our count, that include products such as internet-connected vibrators and fertility devices.

Many modern televisions have settings that automatically boost colors and smooth out motion in ways that can make movies and shows look fake. To help, the UHD Alliance backs a new “filmmaker mode” for TVs. The idea is that content will have the ability to push out a special signal indicating the TV should disable all post-processing — such as the motion-smoothing setting that makes films look like reality shows — and the TV will adjust its own settings accordingly. A number of big TV-makers have signed on so far, including Vizio, Panasonic, Samsung and LG.

We’re finally getting some help in protecting our privacy. This box that you install between your Wi-Fi router and modem takes evasive maneuvers to reduce the data footprint of all the devices in your house. More than just a virtual privacy network Winston scans the traffic coming and going from your house to block ads, filter tracking cookies, fight website “fingerprinting” and cloak your internet address. Even better, Winston claims it’ll speed up your internet because it stops so many online trackers and ads from loading. There’s an $8.25 monthly service fee.