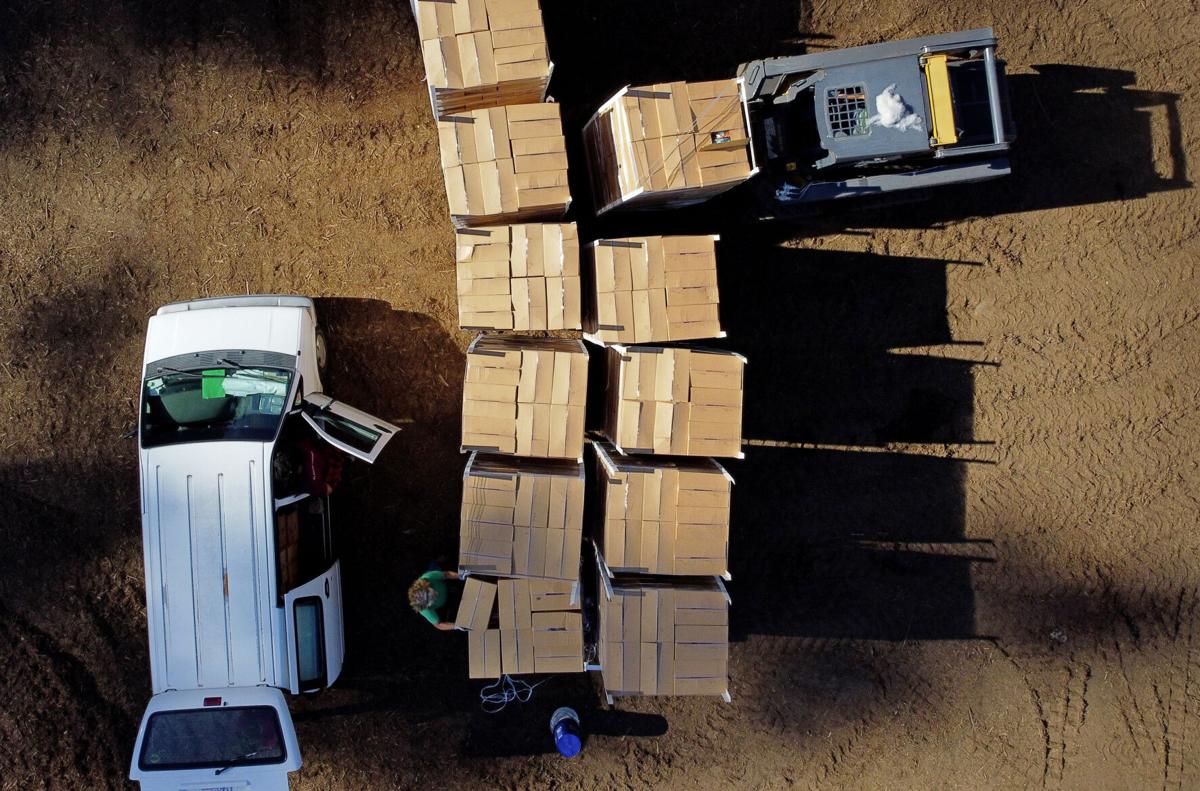 A truck is unloaded of tons of produce July 14 in Woodinville, Washington, part of the EastWest Food Rescue program. 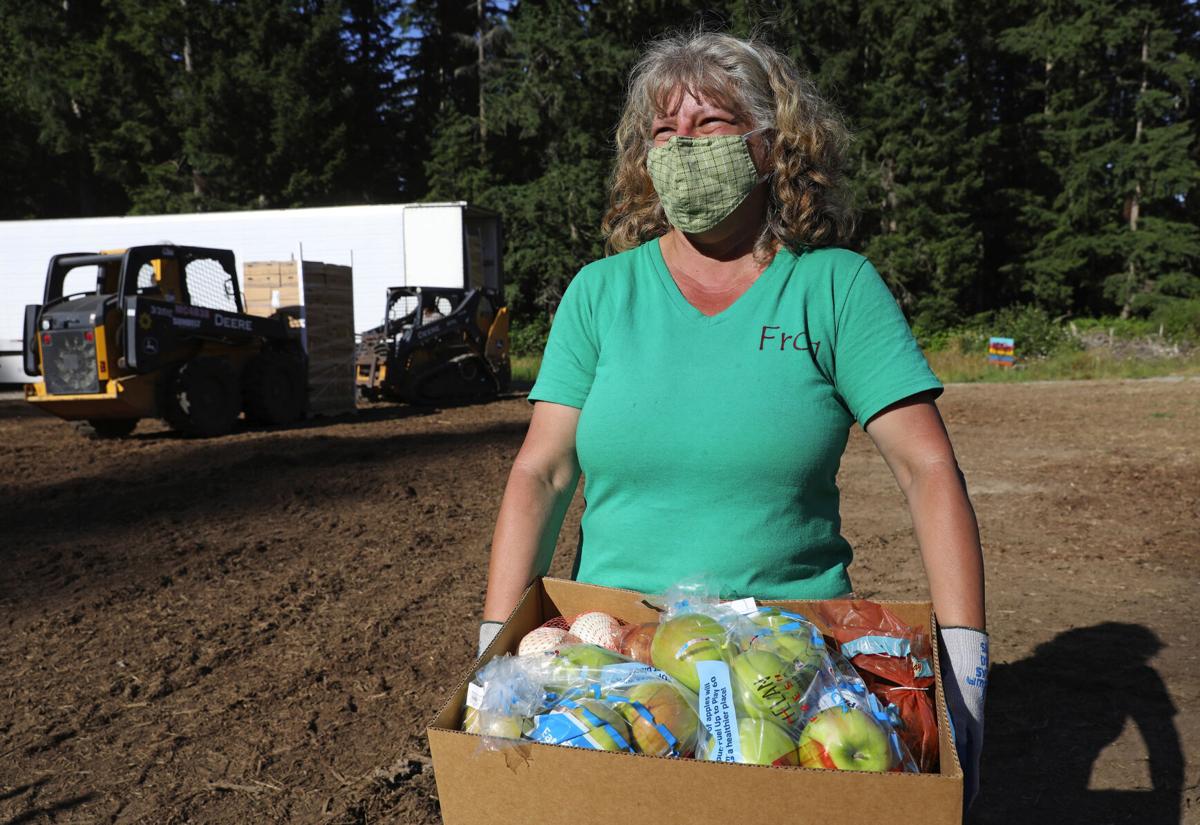 Zsofia Pasztor, co-executive director of EastWest Food Rescue, shows one of the 2,000 boxes donated on July 14. 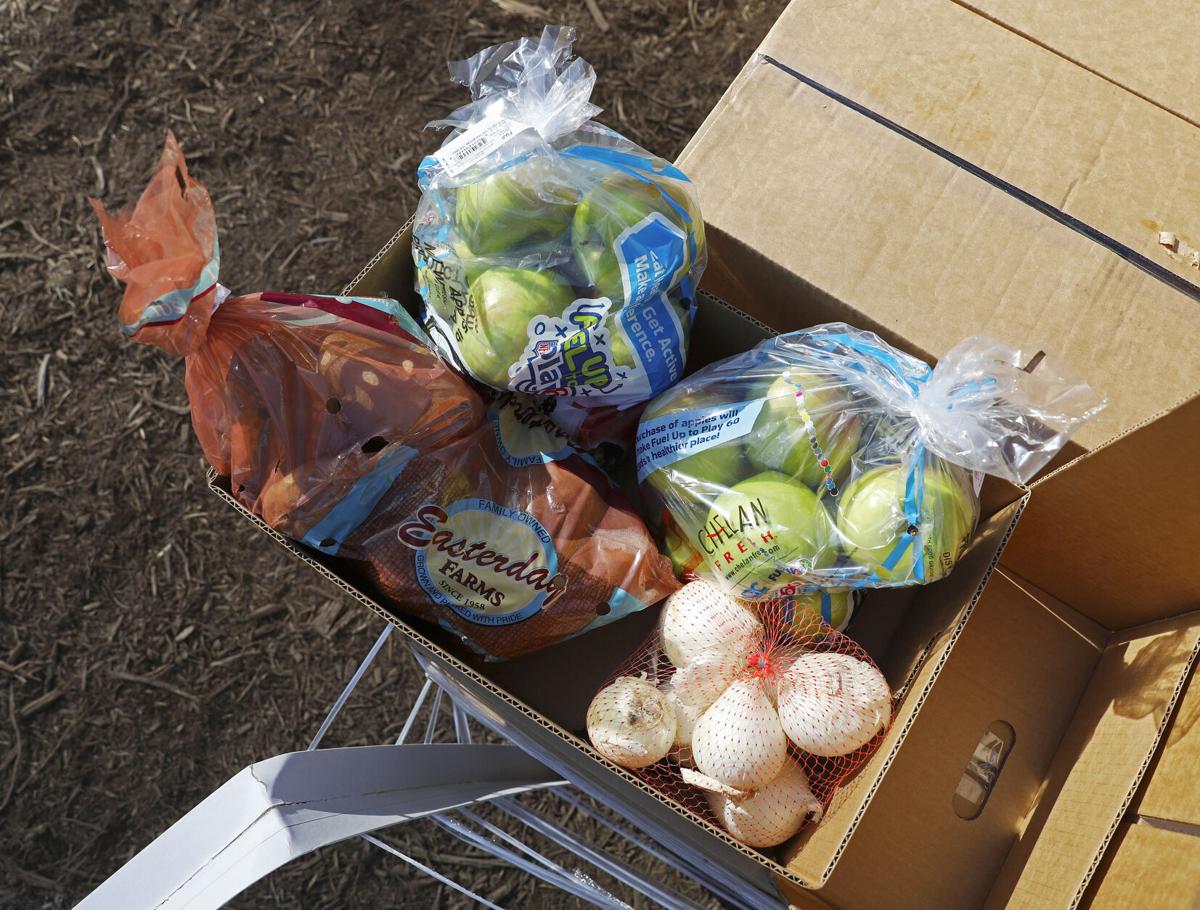 One of 2,000 boxes unloaded at Farmer Frog from Eastern Washington, on July 14, 2020, in Woodinville, Washington, part of the EastWest Food Rescue program during the COVID pandemic. Each box contains 10 pounds of apples, 8 pounds of potatoes and 3 pounds of onions.

A truck is unloaded of tons of produce July 14 in Woodinville, Washington, part of the EastWest Food Rescue program.

Zsofia Pasztor, co-executive director of EastWest Food Rescue, shows one of the 2,000 boxes donated on July 14.

One of 2,000 boxes unloaded at Farmer Frog from Eastern Washington, on July 14, 2020, in Woodinville, Washington, part of the EastWest Food Rescue program during the COVID pandemic. Each box contains 10 pounds of apples, 8 pounds of potatoes and 3 pounds of onions.

George Ahearn had heard about farmers in Eastern Washington who were giving away potatoes and onions and wanted to know if someone had a truck he could borrow to haul the discarded crops to Western Washington food banks.

The response was immediate and dramatic. A convoy of four trucks, including two with trailers, made the trip east, helping provide quite a bounty for local food banks.

The effort didn’t end there. EastWest Food Rescue is now a registered nonprofit organization, having delivered more than 2.4 million pounds of crops to more than 160 food banks. Not only is it helping with food security, but the organization is paying the farmers, who saw the market for some of their crops vanish during the coronavirus pandemic.

“The whole thing started because of COVID,” said Nancy Balin, who answered Ahearn’s initial request and is now one of three directors of the program. “They immediately lost all the restaurant contracts they had for these restaurant-quality potatoes and onions. And since European countries were shut down, they weren’t exporting them because their restaurants were closed.

Meanwhile, unemployment was spiking everywhere, along with the need for food.

“People who had never needed food before needed food banks, and these farmers have potatoes that they need to get rid of,” Balin said.

Ahearn, who grew up in the farming town of Othello, Washington, but now lives in Bothell, read a story about the predicament of farmers in his hometown, prompting him to want to do something. So he contacted Terragold Farms in his hometown.

“Owner AJ Ochoa offered five semi-loads (of potatoes),” Ahearn said. “I said, ‘I’ve got a private vehicle, and I can’t take that.’ He said, ‘Just come take what you need.’”

Ahearn contacted food banks, and while they wanted the potatoes, along with onions being donated by Target AG Production in Othello, they couldn’t take them loose and not in bags.

That is when Zsofia Pasztor, founder and owner of Farmer Frog, a nonprofit that allows children and families to grow food for themselves, stepped in.

She offered crates to put the produce in, and already had a distribution system set up with food banks for other programs she was running.

“It was a natural fit, and here we are, having saved 2 million pounds (of produce),” Pasztor said.

EastWest Food Rescue has grown significantly since the initial convoy in the beginning of May. Ahearn, Balin and Pasztor are the founders and directors. Ahearn, with his contacts in the food industry, handles acquisition. Pasztor oversees packaging and delivery from her farm in Woodinville, Washington, and Balin handles all the operational details.

“The whole thing was extremely organic and took on a life of its own almost immediately,” said Balin, who is president of the organization. “Now we have a totally volunteer, unpaid staff of about 11 main people who are doing different aspects of it. We have about 500 email addresses, and half are volunteers and the other half are donors.”

Ahearn is now working with many farms in Eastern Washington. It was important to him “that I wasn’t asking my farming community that I grew up in to give away their products for free.”

“We’ll take it if they want to give it away for free, but I always wanted to find out from the farmer what their needs were, what their costs were, and at least try to cover their costs,” Ahearn said.

Much of the donations go to paying the farmers.

When the organization started, it was potatoes and onions that were being harvested. Now the harvests are transitioning to fruit.

“The need (for money) is even more severe because fruit needs to be refrigerated,” Balin said. “And to date, we still don’t have any refrigeration capacity. So our biggest need besides funds is cold storage, for fruit, milk and eggs.”

Ahearn said he wanted to stop when the organization reached 70,000 pounds of rescued produce so he could spend more time with his family and his other businesses.

“Timewise, I was done, but they showed me the communities and the people who needed it, and it was the community who said, ‘You can’t stop,’ ” he said. “It has been a wonderful, eye-opening experience about the sheer need that we are experiencing. I am much more attuned to food insecurity issues in our region and in our state.”

The goal now is 10 million pounds of food rescued, which Balin said will take $250,000 in donations in addition to hundreds of volunteer hours for packaging and delivering.

“Between now and August, we are pretty much sure that we will be moving 300-plus thousand pounds a week,” Ahearn said. “I knew I had these connections on my left hand (the farmers) and these needs on my right hand (food insecurity) and it was just a matter of connecting the dots.”

The results have been gratifying for Balin, who answered Ahearn’s original request because she had a truck.

“It’s amazing and easily the most important thing I have ever done in my life,” said Balin, who worries about even worse food shortages as coronavirus cases continue to spike.

“That has to happen,” she said. “We’ve got to keep buying the food because if we don’t, we’re not going to have farmers.”