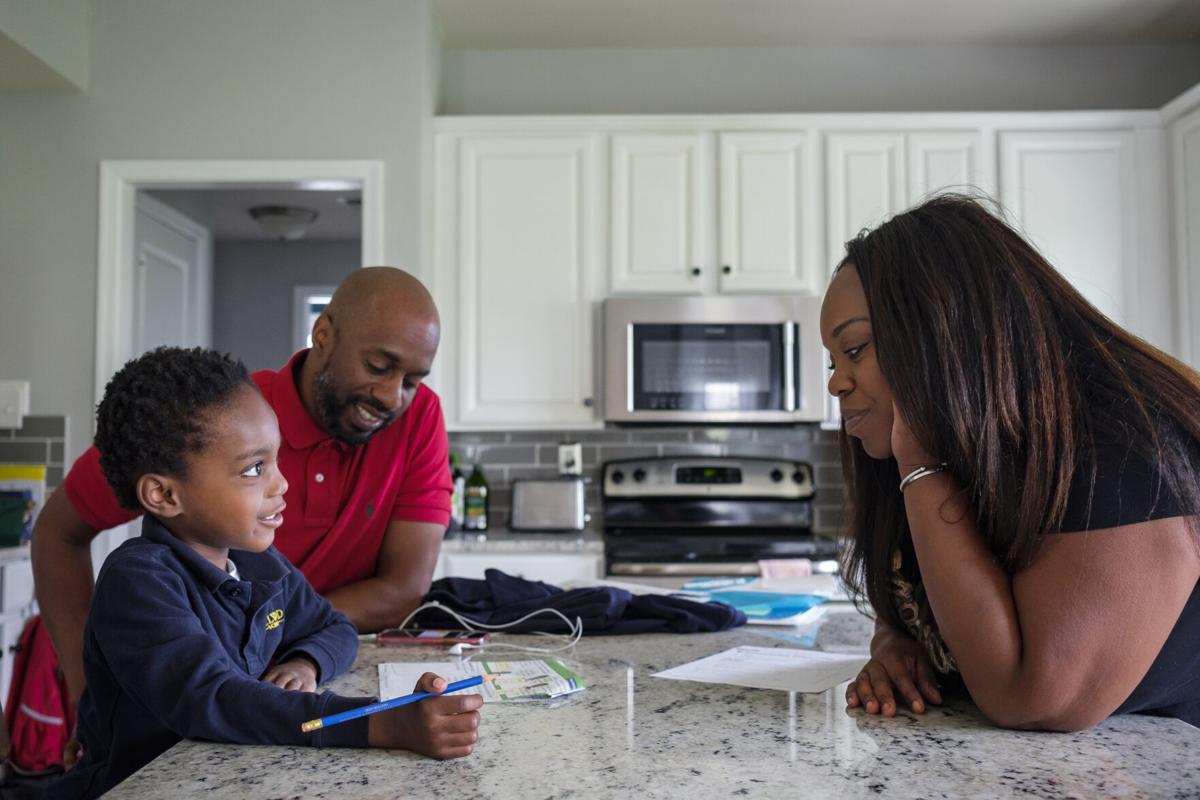 Working from home during the pandemic, Angele Russell says she’s doing her job as well as she’s ever done it. She’s just doing her personal life better — being a more present mother to her 6-year-old son, Abraham, and a less stressed wife to her husband, Javarro. MUST CREDIT: Photo for The Washington Post by Carlos Bernate 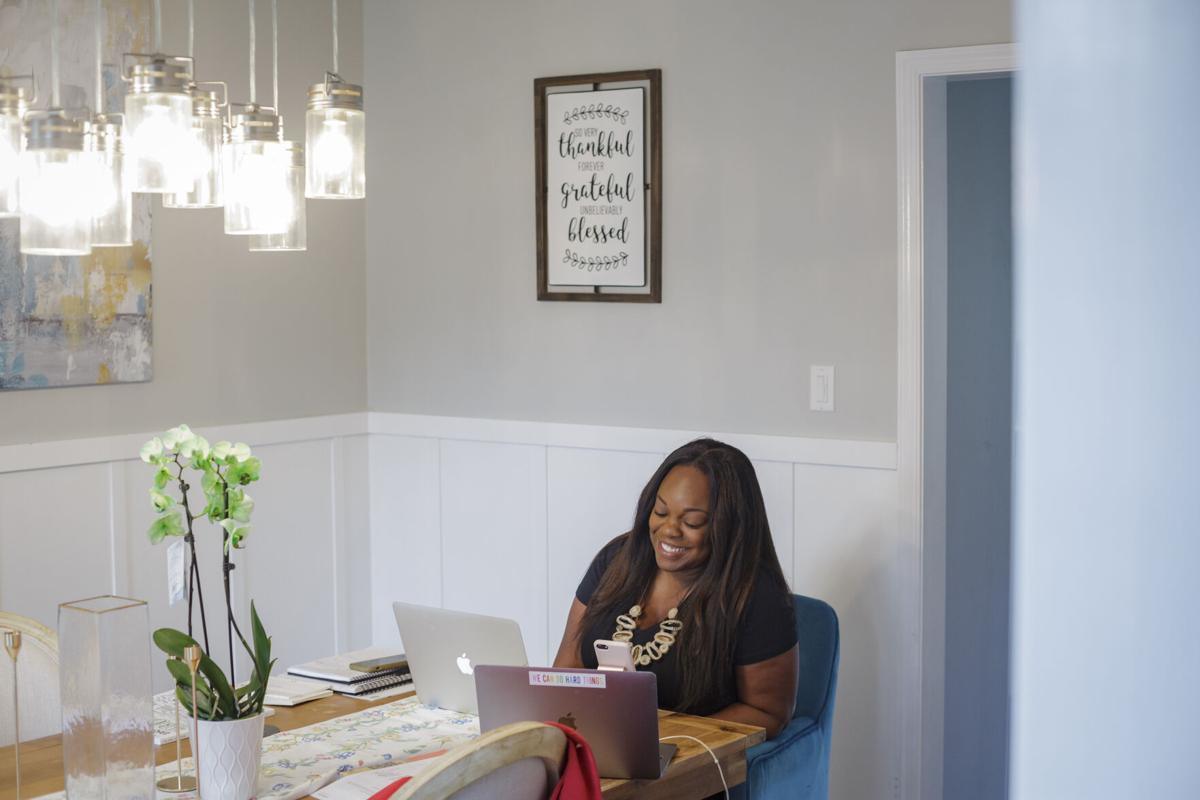 “There’s just zero benefit in my mind now to return back into the office and give up all of those things that we gained over the past year,” says Angele Russell. MUST CREDIT: Photo for The Washington Post by Carlos Bernate

Working from home during the pandemic, Angele Russell says she’s doing her job as well as she’s ever done it. She’s just doing her personal life better — being a more present mother to her 6-year-old son, Abraham, and a less stressed wife to her husband, Javarro. MUST CREDIT: Photo for The Washington Post by Carlos Bernate

“There’s just zero benefit in my mind now to return back into the office and give up all of those things that we gained over the past year,” says Angele Russell. MUST CREDIT: Photo for The Washington Post by Carlos Bernate

Katy Clark left the house every morning by 7 a.m. to fight for parking. Lymari Vélez Sepúlveda spent two to four hours a day commuting, dragging her young son along for the ride so he could be dropped off at daycare. Christopher Thomas left before his daughter woke up, and by the time he returned, she was starting to get ready for bed. Angele Russell raced to pick up her son each evening before his aftercare program closed. And a mother of three in New Jersey almost never got home in time to eat dinner with her family on weeknights. Sometimes she wouldn't even make it for the final kiss good night.

"And if I missed bedtime, I was really upset. And they were upset," says the New Jersey mom, who spoke on the condition of anonymity because she was expressing a desire she worried would upset her bosses: She wants to work from home.

For decades, working parents - and mothers in particular - have been calling for more flexibility to juggle their personal and professional responsibilities. Finally, a global pandemic forced many employers to give it to them. Office workers were sent home en masse to stem the spread of the novel coronavirus, along the way testing out their companies' capacity to maintain operations with a dispersed workforce - and challenging some long-held notions about how productivity is best achieved.

A year later, having proved they can do the work remotely - often under difficult circumstances that included too little child care and too much virtual education - many parents are now loath to return to full-time office life and the toll it took on their families.

That places employers at a crossroads as more workers are vaccinated and executives plot out their plans to reopen offices. Hanging in the balance are questions about the value of in-person collaboration and workplace culture vs. potential savings from distributed workforces and the desire from workers, including many parents, to have the continued option to work remotely.

"I've already kind of let it be known that I do not have any intention of returning to the office full time - because now, from a professional standpoint, we know that this model works," says Angele Russell of Moseley, Virginia, who works in the district office of Rep. Abigail Spanberger, D-Va. "There's just zero benefit in my mind now to return back into the office and give up all of those things that we gained over the past year."

For Russell, 38, "all of those things" include the ability to hop on an exercise bike after a tough constituent call, to keep the laundry going throughout the week and not to have traffic-fueled panic attacks while racing to make sure her kid isn't the last one to be picked up from aftercare. And time. So much time. Time she doesn't spend doing her hair or filling up her gas tank.

Russell says she's doing her job as well as she's ever done it. She's just doing her personal life better - being a more present mother to her 6-year-old son, Abraham, and a less stressed wife to her husband, Javarro. She's able to sleep more, take better care of herself. Even dinner is better. "I'm not coming home, being stressed out on the commute and then kind of throwing something together and, you know, drinking my pain away," she says.

A January poll by Gallup showed that 44 percent of U.S. workers prefer to continue remote work. Katie Connolly, who has been researching work flexibility for the Barbara Lee Family Foundation, has seen this shift play out in person.

During the pandemic Connolly returned to her native Australia, which has kept the virus tightly controlled and may offer a glimpse of what post-pandemic life will look like in America. Though offices are open, few employers have made a return mandatory. And few workers have voluntarily gone back to traditional 9-to-5 cubicle life.

Connolly expects that to continue once everyone is vaccinated. "I think employers are having a hard time justifying to people why they absolutely have to be back in the office 9 to 5 when things ran pretty smoothly in the absence of that demand," she says.

Today Katy Clark can't believe she often left the house before daylight just to get a parking spot for her research job at the University of Michigan in Ann Arbor. But there was no other way; if she didn't, the 50-year-old might have to circle the lot for an hour, which would mean she'd have to work late and then make her teenagers miss part of hockey practice.

After shuttling kids to activities, she'd rush home, scramble to make dinner, then "feed the cats, scoop the litter box and make sure no one's in crisis." Now she can work until it's time to drive a kid to practice, and she doesn't have to take an entire afternoon off to take her 14-year-old daughter to the orthodontist. But the benefits haven't just been logistical. Clark's daughter struggles with anxiety, and when she's having a tough time, Clark is there to help. And she's connected more with her 17-year-old son, who will leave for college next year.

"He will just come in once in a while and start talking about our cats or say something silly. It's nice to have kind of those small moments with him that we wouldn't have had," she says.

C. Nicole Mason, chief executive of the Institute for Women's Policy Research, thinks one of the pandemic's silver linings is that it has forced corporations to see employees as humans, not just workers. "The issues related to child care used to be seen pretty much as your problem that you as an individual or family had to solve," she says. "Because of the pandemic, it became an employer's problem."

Mason is a single mom by choice of 11-year-old twins, intimately versed in the near-impossible act of full-time work and full-time parenting. She also leads an organization that moved into new office space not long before the quarantines began. "Even I was like, 'We've got to come back at some point. We just got new offices!' " she says.

But when Mason's organization polled its staff, there was a resounding call for flexibility. "People were like, 'You know what? I don't really want to commute. That's an hour of my day that I could be working or doing something else,' " she says.

Mason suspects that the pandemic accelerated conversations around caregiving to an extent that policy discussions never could have.

"We have a moment of reckoning," she says. "And it's not only an opening, it's an opportunity . . . to reimagine a workplace that is actually more reflective of our lives. It's a shame it took a pandemic, but it would've taken years to get to this point. Actually, I don't think we ever would have gotten here."

Of course, not all employees have the luxury of even requesting the option to work from home. Doctors and nurses still need to show up to hospitals, teachers to classrooms, cashiers to grocery stores. Vicki Shabo, senior fellow with New America's Better Life Lab, is particularly worried about the impact on service industry workers who have been disproportionately hurt by the pandemic. More white-collar employees staying home could mean fewer child-care choices, bus routes and jobs in city centers for other Americans.

"Things could shift in a way that continues to make it harder for these other workers," Shabo says.

The mother of three in New Jersey is ready to walk. The 20-year insurance industry veteran says the word she'd use to describe her family's pre-pandemic existence is "hectic."

Since the pandemic restrictions began, the family feels more in tune with one another. And she's not willing to give that up. In a company questionnaire, she said her ideal would be to work from home five days a week. She was approved for two days at home. But negotiations are ongoing, and she hopes her company will reconsider. If it doesn't she'll float her résumé elsewhere.

That threat, rather than a general sense of benevolence, is what's likely to drive a long-term shift, says Mason of the Institute for Women's Policy Research.

"I don't think employers who have a very traditional model or understanding of the workplace will be able to sustain it, she says, "and be able to retain top talent. . . . Employers are going to have to adapt."