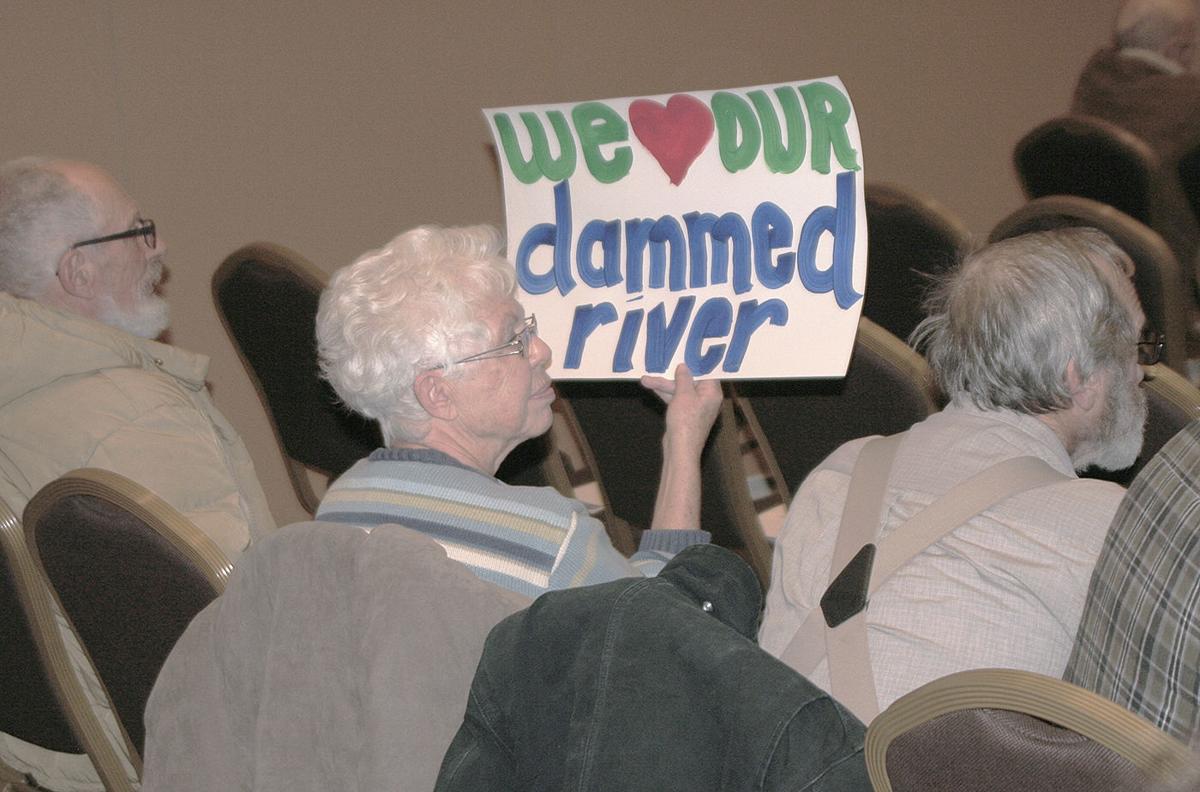 during a Know the Dam Facts rally before the final stakeholder public workshop in Pasco. 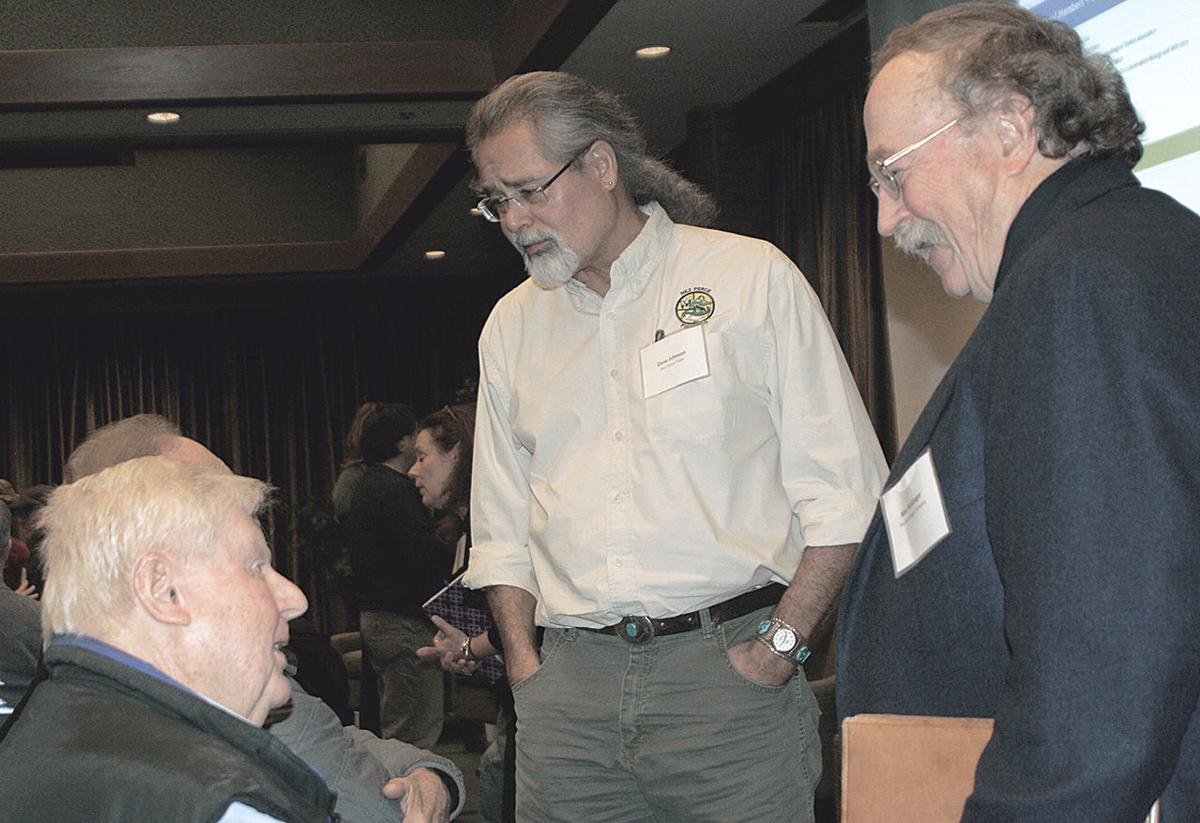 Audience members speak with David Johnson, department manager of the Nez Perce Fisheries Department, center, and Alex McGregor, chairman of the McGregor Co., following the third and final workshop for stakeholders regarding the lower Snake River dams in Pasco, Washington.

during a Know the Dam Facts rally before the final stakeholder public workshop in Pasco.

Audience members speak with David Johnson, department manager of the Nez Perce Fisheries Department, center, and Alex McGregor, chairman of the McGregor Co., following the third and final workshop for stakeholders regarding the lower Snake River dams in Pasco, Washington.

Representatives supporting agriculture, fish and other uses spoke Monday, Jan. 13, during the third and final public workshop on the draft of Washington Gov. Jay Inslee’s study of the four lower Snake River dams.

Removal of the dams has been hotly debated for years. Proponents say taking them out would improve fish passage while opponents say it would hurt the region’s farmers, who rely on barges to ship their wheat downriver to ports for export. Taking out the dams and their adjoining locks would make the river impassable for barges.

“We need to keep in mind that helping salmon thrive is a shared responsibility,” said Alex McGregor, chairman of the McGregor Co., based in Colfax, Washington. “I hope we can move past litigation, headlines and news clips that have prevailed over substance and working together.”

Farmers have done their best to be good stewards for fish, McGregor said, pointing to achievements such as voluntary conservation efforts.

Dam removal proponents have linked the dams to the wellbeing of killer whales that spend most of their time in the Salish Sea and Puget Sound.

McGregor cited an Environmental Protection Agency study of the Salish Sea that states the decline of salmon is closely associated with the health of Puget Sound, with wastewater the main source of contamination.

“It’s time aggressive steps be taken to clean up contamination along Puget Sound,” McGregor said. “Toxin levels for Southern Resident killer whales are reportedly 4 to 6 times higher than their counterparts.”

“This is going to be a big lift — there’s no low-hanging fruit left,” said Rob Masonis, vice president of western conservation for Trout Unlimited.

David Johnson, manager for the Nez Perce Tribe fisheries department, said his team is working to fix habitat but can only do so much in so many areas.

“Our harvest has been extremely curtailed,” he said, noting that in some years four tribes have to split 10,000 salmon for ceremonial purposes, and supplement them with fish produced by hatcheries.

“The last couple years, we’ve had some horrible returns,” Johnson said. “I’m not going to blame these on the dams, these are largely related to what’s been happening in the ocean, and that’s a climate change issue, which in my mind is a lot larger than working on the dams.”

Masonis said it will take “massive investment” in the system to determine what will work for agriculture, fish and energy.

Opposing sides have an opportunity to come together and build bipartisan support for solutions, he said, but that means political division must cease.

“It depends on where you’re sitting in the basin, which party you’re affiliated with, pretty much where you come down on these issues,” he said. “That’s not a recipe for success for solving these problems.”

Rob Rich, vice president of marine services for barge company Shaver Transportation, spoke about the ripple effect that removal of the dams and eliminating the ability to move crops using low-cost barges would have on rural communities.

“There’s going to be a significant impact, and it isn’t just going to be to the farm family,” Rich said, referring to other stores in the region that do business with farmers.

Agriculture is “overwhelmingly” made up of families and small businesses, McGregor said, noting many of his company’s 36 locations are the biggest employer in town, with six to eight employees.

He sometimes hears that the need for barges and tugboats is declining, but the opposite is true.

The company was going “full blast” last fall, using trucks, trains and barges to move liquid fertilizer upriver from the Tri-Cities to the Port of Clarkston to meet a “very narrow window” for growers to plant fall seed.

“Imagine if we had had to wait until rail got around to it or highways weren’t crowded,” he said. “Farmers would have had to make do with seeding late, and every day you delay seeding, you lower your yield potential.”

McGregor is chairman of the rural vitality task force for the Association of Washington Business.

Potato farmer Blaine Meek said the workshop enabled him to get a better understanding of people who supported breaching the dams.

“That doesn’t mean I agree with everybody’s point of view, but there is a lot more common ground than I thought there was,” he said. “And I think there are more joint solutions than I thought coming into the process.”