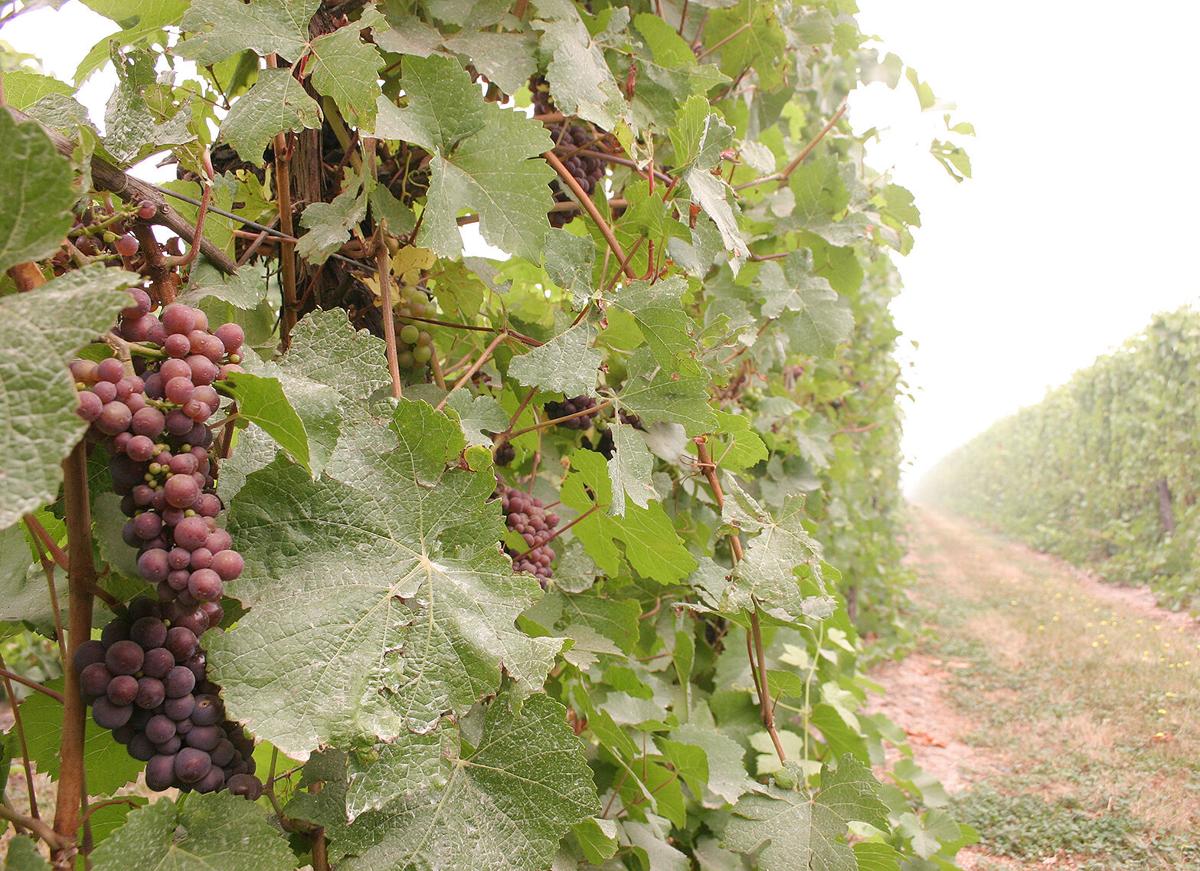 Wine grapes are nearly ready to harvest at Meridian Estate Vineyard in Silverton. 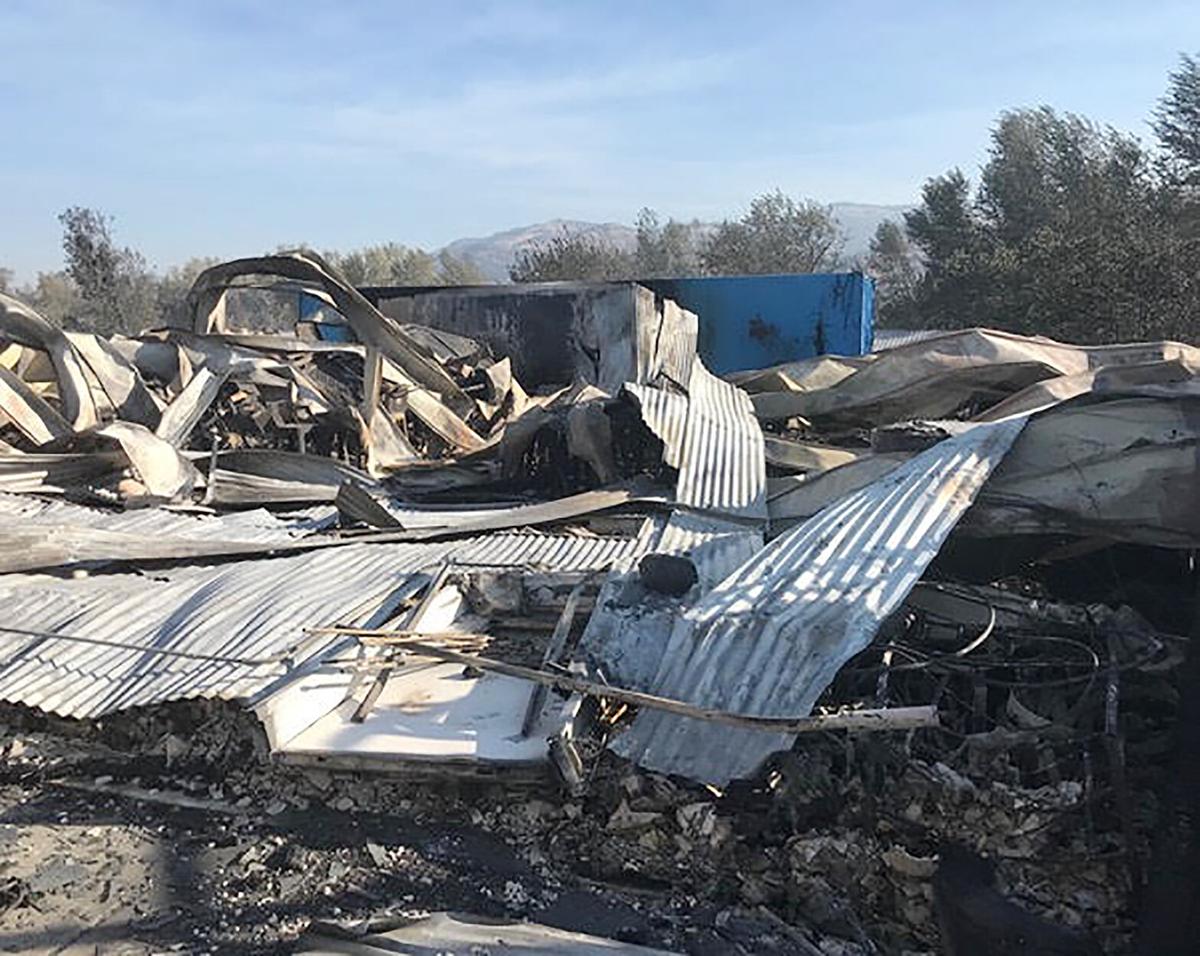 Simple Machine Winery, owned by Brian Denning and Clea Arthur in Talent was destroyed in the Almeda Fire. Winemakers and growers across Western Oregon are donating grapes and equipment to help the couple make wine in 2020, and eventually rebuild.

Wine grapes are nearly ready to harvest at Meridian Estate Vineyard in Silverton.

Simple Machine Winery, owned by Brian Denning and Clea Arthur in Talent was destroyed in the Almeda Fire. Winemakers and growers across Western Oregon are donating grapes and equipment to help the couple make wine in 2020, and eventually rebuild.

Clea Arthur was out for a morning run at Mount Ashland in Southern Oregon on Tuesday, Sept. 8, when she heard the Almeda Fire was racing out of control.

Her partner, Brian Denner, called in a panic as high winds pushed the flames quickly north toward the city of Talent, where they own Simple Machine Winery. Within hours, the winery, tasting room, equipment and 100% of their inventory was destroyed in the blaze.

“The level of devastation is hard to wrap your head around,” Arthur said in an interview with the Capital Press. “It’s just heartbreaking.”

Massive wildfires are scorching millions of acres across the West and covering vast swaths of the region in a thick blanket of smoke, which has grape growers and vintners concerned about impacts that range from wine quality to worker safety as harvest gets underway.

Arthur and Denner say they weren’t sure they could stay in business after the 3,200-acre Alameda Fire swept through Talent and Phoenix, all but leveling the two towns along Interstate 5. Officials estimate more than 2,300 people lost their homes in the inferno.

On her way back from Mount Ashland, Arthur found traffic on I-5 was at a standstill as residents rushed to escape the fire. She reversed course and evacuated instead to Northern California with friends. Denner, meanwhile, left Talent and slept in his truck outside Weisinger Family Winery on the east side of Ashland, ready to flee at a moment’s notice.

Denner started Simple Machine Winery in 2010, making about 700 cases of wine per year. Arthur remembers they had just brought in the first harvest of 2020 Sauvignon blanc grapes days before the fire burned his downtown buildings to the ground.

“I have one bottle of our wine at home. That’s all we have left,” Arthur said.

At Willamette Valley Vineyards in Turner harvest was put on hold after Labor Day due to smoke from nearby wildfires.

“We stopped everything outdoors,” Bernau said. “We have delayed all picks until after the air clears.”

Fortunately, Bernau said there is a silver lining. Smoke has lowered temperatures by around 10 degrees, slowing the ripening process and buying a little extra time before harvest begins in earnest.

“The blessing is that most of these (grapes) don’t have to be picked right now,” he said. “We can wait.”

Elsewhere, harvest is moving full speed ahead with industry officials working to secure proper protective gear for crews working in the vineyards. Gina Bianco, executive director of Rogue Valley Vintners, said the organization received a donation of 900 N95 masks from the Asante Foundation in Medford to protect fieldworkers.

Brian Gruber, winemaker for Barrel 42 Custom Winecraft in Medford, said they are about one-third of the way through this year’s harvest. Barrel 42 works with Southern Oregon vintners to make wine for 20 local brands.

“We’re picking right through all the smoke, and continuing to make things happen,” said Gruber, who is treasurer of the Oregon Winegrowers Association.

The agencies asked employers to allow workers with underlying health conditions to stay home, rearrange tasks to let workers get relief from the smoke and provide N95 masks.

“One of the most important things was making sure they have proper personal protective equipment, and getting them masks,” Gruber said. “Anybody who wanted them, we made them available.”

Apart from the public health concern, winemakers say exposure to wildfire smoke can tarnish grapes and cause the wines to taste burnt or ashy.

Industry leaders in Oregon, Washington and California formed the West Coast Smoke Exposure Task Force in 2019 to conduct research on how smoke affects wine grapes, and what vintners can do to adjust their winemaking practices.

Vicky Scharlau, executive director of the Washington Winegrowers Association, said it is not a simple issue. Smoke effects differ based on a variety of factors, such as a vineyard’s proximity to fire, how long the smoke lingers, what fuels are burning and which grape varieties are exposed.

“There is so much we don’t know,” Scharlau said. “We have been relying on our peers and colleagues in Australia, because they have more experience with smoke damage and smoke exposure than we do.”

Researchers from Washington State University, Oregon State University and the University of California-Davis are all involved in the effort, which carries significant economic ramifications. The farm gate value of wine grapes across the three states is $4.5 billion, Scharlau said — not including the added value of the wine itself.

It remains unclear what economic damages the industry may sustain from 2020 fires, Scharlau said.

“Yes, we are concerned,” she said. “We have some of the best researchers in the world on the project.”

Gruber, of Barrel 42 in Medford, said that just because there is smoke in the air does not mean the wine grapes are tainted. There are things winemakers can do to preserve the vintage, he said, like making white or rosé wines with less contact between the juice and skins.

“I don’t think people are declaring a disaster yet,” he said.

Gruber said he is sending samples of wine grapes to test for smoke compounds at a laboratory in California. However, due to the number of fires in the West, the lab is backlogged and results will be delayed by several weeks.

For now, Bernau, with Willamette Valley Vineyards, said they are not canceling any of their grape contracts with growers, though though it is possible some vineyards might see fruit stranded on the vine.

“Timeliness is extremely important in getting this (smoke) data,” Bernau said.

Community supportIn the immediate aftermath of the Almeda Fire, Arthur said she assumed there was no way they could make wine at Simple Machine in 2020. Then, help arrived.

Several wineries, including Willamette Valley Vineyards, donated fruit and equipment for Simple Machine to make a 2020 vintage, while Gruber offered space at Barrel 42 for Denner and Arthur to make wines that they can sell to help them get back on their feet.

”The community here has been exceptionally generous,” Gruber said.

Arthur said the winery has started a new “after-fire” wine club to pre-order future vintages that will go toward rebuilding their business in Talent. The last week has been “a whirlwind of emotions,” Arthur said, as within 48 hours they went from utter devastation to renewed hope.

”It’s been so inspiring and just crazy humbling, the amount of generosity and support,” she said. “People want us to rebuild.”

Bianco, executive director of Rogue Valley Vintners, said the association is also considering a benefit or fundraiser with proceeds to help members like Simple Machine that have been affected by the fires.

”I think everybody is keeping a very positive attitude toward this year’s vintage,” she said.