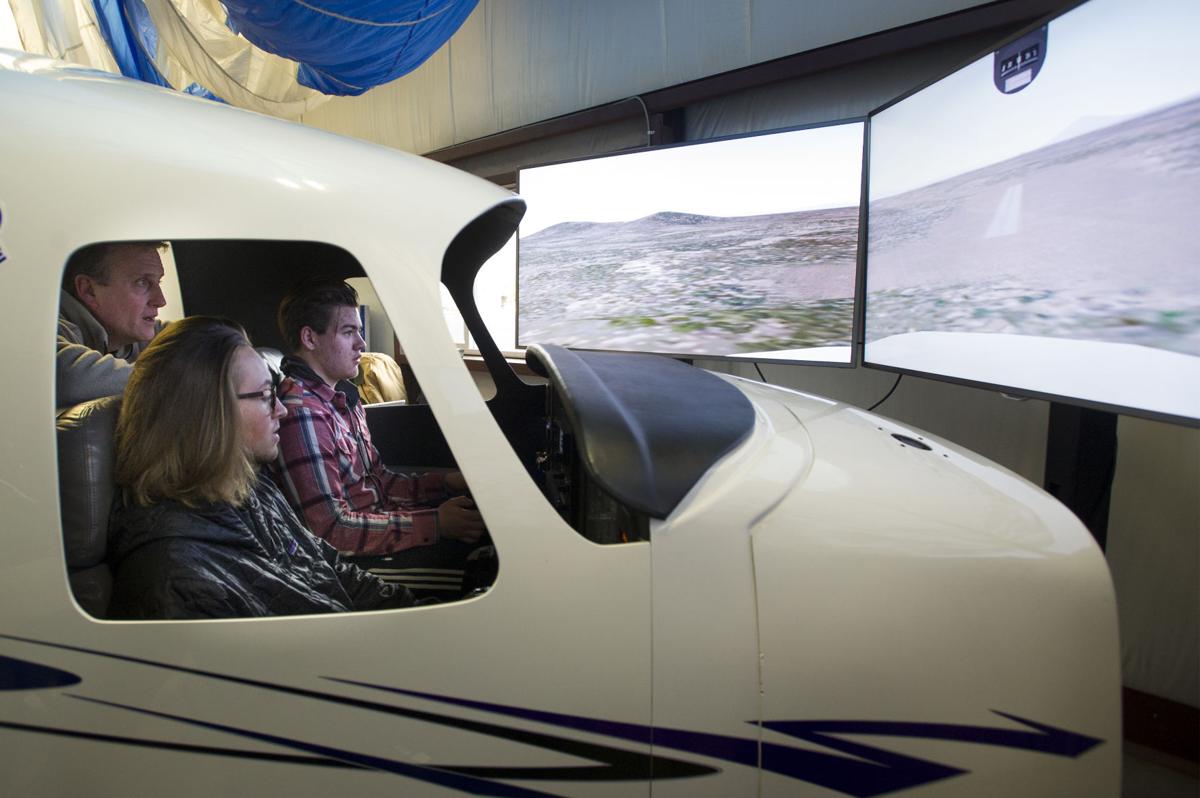 Flight instructor Walt Lasecki, in back, talks Aaron Johnson, in the pilot’s seat, and Luka Perle through a landing in the flight simulator at Outlaw Aviation. 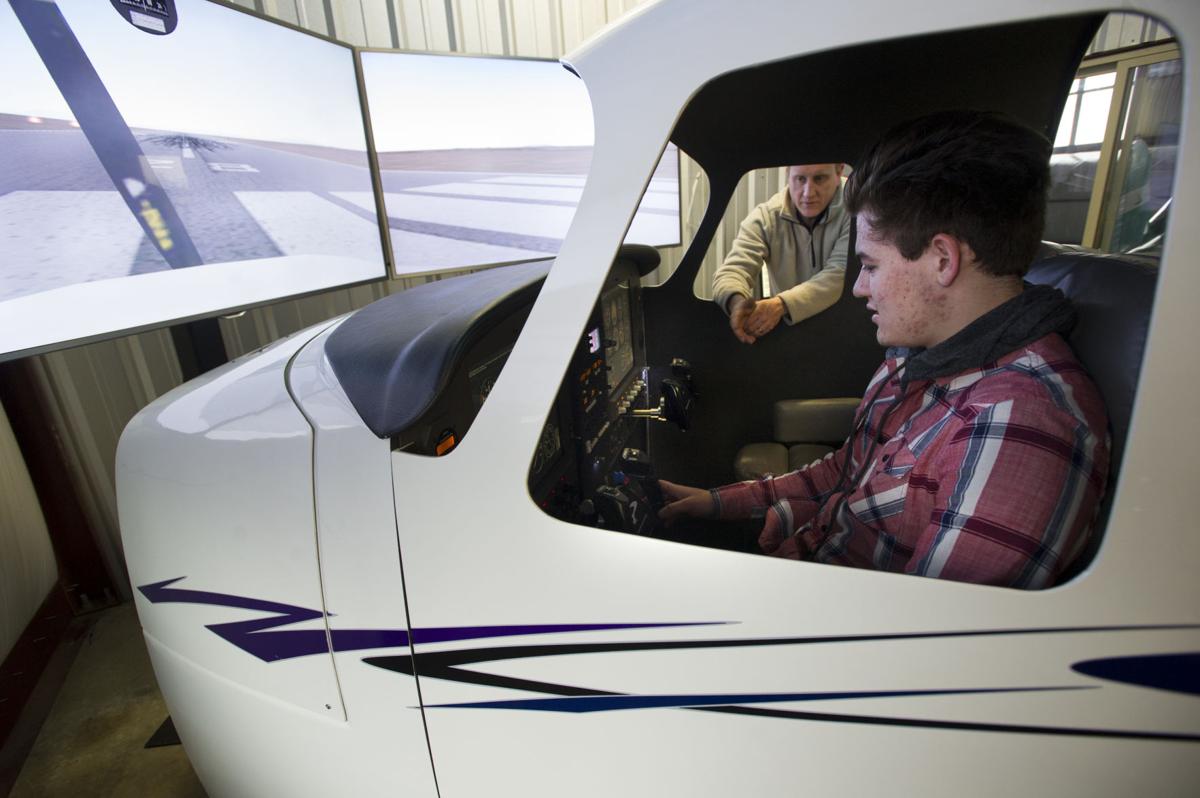 Flight instructor Walt Lasecki talks Aaron Johnson through all the controls while preparing him for a flight in the simulator at Outlaw Aviation in Sisters on Wednesday. (Ryan Brennecke/Bulletin photo) 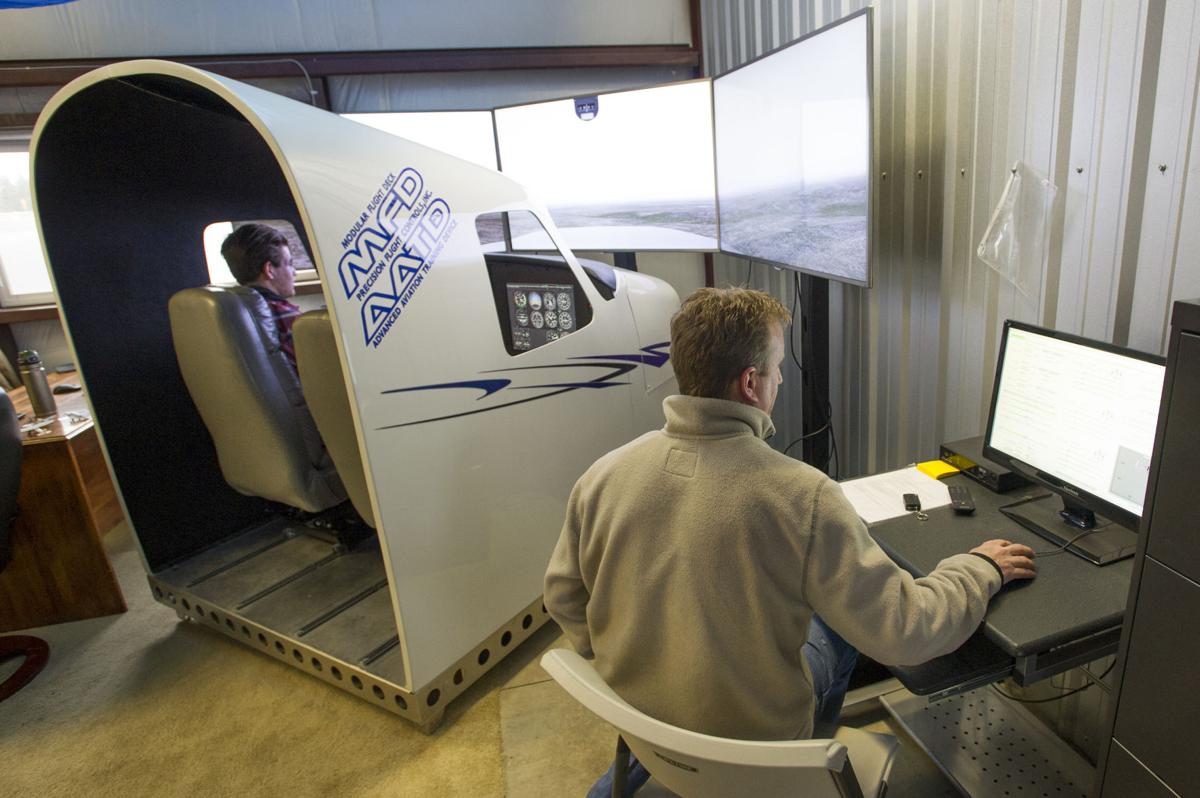 Flight instructor Walt Lasecki uses software to change the weather and visibility for Aaron Johnson as he takes a flight in the simulator at Outlaw Aviation in Sisters. (Ryan Brennecke/Bulletin photo) 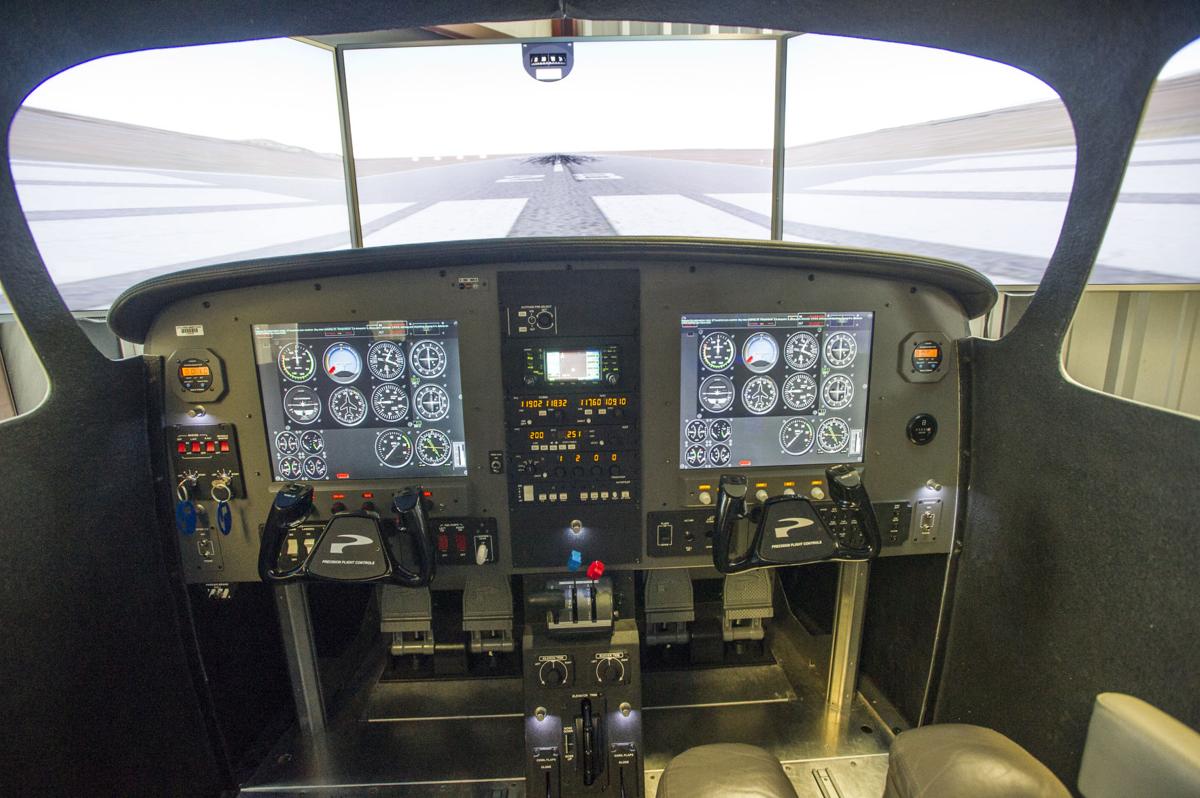 Flight instructor Walt Lasecki, in back, talks Aaron Johnson, in the pilot’s seat, and Luka Perle through a landing in the flight simulator at Outlaw Aviation.

Flight instructor Walt Lasecki talks Aaron Johnson through all the controls while preparing him for a flight in the simulator at Outlaw Aviation in Sisters on Wednesday. (Ryan Brennecke/Bulletin photo)

Flight instructor Walt Lasecki uses software to change the weather and visibility for Aaron Johnson as he takes a flight in the simulator at Outlaw Aviation in Sisters. (Ryan Brennecke/Bulletin photo)

Jake Lee moved from Pendleton to Sisters just so he could learn to fly. At 8, he said, he flew for the first time, accompanying his father, an aerial photographer for an engineering firm in Hermiston in a small plane.

“He goes up and takes pictures of fields and things, and I got to go with him once,” Lee said, “and that was really awesome.”

Lee caught the bug that day. Now 16, he’s enrolled in the aviation program at Sisters High School, where classes are taught by Sheryl Yeager, a certified flight instructor. The program helps students earn their private pilot certificate and opens a path toward a career in commercial aviation.

“I moved here from Pendleton for the most part for this; it’s really important,” Lee said. “I just think it’s kind of amazing here that, in Sisters, it’s about one of the only schools in America that offers this kind of experience and opportunity. And you can definitely feel that, too, in every class she teaches.”

Nonetheless, the 6-year-old program has produced just one licensed pilot so far, Yeager said. That’s due, in part, to the age requirement. Student pilots must be at least 17 to take the flight test for their pilot’s license.

“It’s not really disappointing,” she said Thursday. “It’s an age issue for us. In the next couple of years, we’ll have a whole onslaught of kids getting their licenses.”

Those new pilots will have opportunities. Airlines are looking for men and women to fill cockpits left vacant by a retiring generation of pilots. Boeing, the Chicago-based aircraft maker, last year forecast a demand for 117,000 pilots in North America by 2036. That number does not include the demand for aircraft mechanics, technicians and cabin crew. The number of student pilots expected to eventually fill those vacancies is slowly increasing but is still below the numbers of earlier eras.

In 2016, the Federal Aviation Administration reported 158,000 active, licensed airline transport pilots — the type that fly airliners — in the U.S., more than twice the 70,000 flying in 1980. In the same period, the number of active private pilots fell from 357,500 to 162,300. Growth in general aviation — students, private pilots and flight instructors — is an indicator of what’s to come in commercial aviation because professional pilots pass through those stages on their way to careers.

“Airlines are seeing that and realizing that they’ve got to do more to get younger people interested,” said Cindy Hasselbring, senior director of the high school aviation initiative at the Aircraft Owners and Pilots Association. “That’s why the high school program is so important.”

At Sisters, Lee, a sophomore, moved from Pendleton to live with his grandparents in Sisters just so he could enroll in the aviation program. He flew for the first time at the start of the school year. His parents, Robert McMillan and Eleanor Lee, supported the move, he said.

“I was nervous to tell them I wanted to go, but once I did, they completely supported it,” Lee said.

Luka Perle, 17, lives in Bend, but like Lee also chose to attend Sisters High for its aviation program. A junior, Perle soloed in October and since then has flown the Cessna 172 provided by Outlaw Aviation for flight training several times on his own. He, too, looks forward to a career in aviation.

“Ever since, as long as I can remember, I’ve wanted to be a pilot, and when I was in middle school and trying to take lessons, I heard about Sisters’ aviation program,” he said. “I thought, ‘Wow, this is perfect.’”

Sisters is not alone in high school aviation programs. About 200 schools around the country have at least one class in aviation, including Joseph Charter School, in Wallowa County, and a Michigan school with two of its own aircraft, Hasselbring said. The Aircraft Owners and Pilots Association created a flight instruction curriculum it’s testing in 29 schools. Still, for young people, cost and commitment are barriers to flight.

“But the interesting thing is that high schools around the country are calling us every week, so something is pushing that,” Hasselbring said. “There is interest in flying and in careers.”

The cost at Sisters High School of flight instruction runs about $6,000 per student, or about $140 per hour of flight instruction. Students may defray that cost in several ways. Ground school, a required part of instruction, is covered by the school district and by grants from Ohio-based Sporty’s Pilot Shop and the Experimental Aircraft Association. Students interviewed for this story said they received $1,000 scholarships from the Roundhouse Foundation.

Outlaw Aviation, the small flight school whose primary focus is teaching Sisters High students to fly, does what it can to reduce the cost of flying. Its new owners, former Marine Sam Monte and Air Force veteran Walt Lasecki, say the program is a community effort.

“It’s all about making it easier for them to get their licenses,” Lasecki said. “It’s kind of a joint effort because everyone knows that’s what we’re focused on. It’s a community. They all help us out to make it work.”

Outlaw works with local airframe and power plant technicians, the Sisters Eagle Airport and others to keep the lights on and their trainer in the air. Outlaw matches a portion of what the students’ parents pay for lessons, and for every 10 hours flown, a student receives one free hour, Lasecki said.

“Funding is not a barrier to them completing the program,” he said.

Central Oregon Community College recently donated an advanced flight simulator to Outlaw Aviation to aid in the students’ training. Lasecki and Monte use the FAA certified machine to familiarize new students with flight basics and prepare advanced students for their check rides that, if successful, earn them their private pilot licenses. About 12 students are flying of approximately 50 enrolled in the program.

Charmayne Owens, 16, a sophomore, said she aspires to fly commercial cargo or firefighting aircraft. Stories she heard from her great-grandfather, who flew his own Piper Cub around Oregon, planted the seed. Watching tankers hauling fire retardant pass overhead during the Milli Fire last summer reinforced the desire to fly, she said. Her father, Josh Owens, a logger, is envious of her experience, she said.

“I love the feeling of flying,” Owens said. “It’s kind of like being free. I love how you can take off and see the world from a different perspective.”

Her next step after graduation will be enrolling in a program like the one at COCC, where she can become a flight instructor herself and earn advanced ratings, she said. At COCC, students may qualify for scholarships available from local and nationwide sources, said Karl Baldessari, director of the aviation program at COCC.

COCC also is one stop for a recruiter from Horizon Air, the regional airline that’s part of the same group that owns Alaska Airlines.

“The only requirement is that they have a private pilot license,” Baldessari said. “They’re eligible to interview as long as they’re enrolled in our program. It’s a great incentive; they can stay at home, save a bunch of money and do all their training in a two-year degree.”

The Horizon Air director of pilot recruitment and an Alaska Airlines pilot visit 11 colleges and universities in the Northwest and Alaska, including COCC, two or three times a year, said Bobbie Egan, Horizon spokeswoman, on Thursday. Although the COCC students do not graduate with an air transport pilot certificate, they may qualify for a $7,500 stipend while in training and work for Horizon until they achieve the flight hours they need to take a seat in the cockpit, Egan and Baldessari said.

The pilot shortage, Baldessari said, results, in part, because baby boomer pilots — whose mandatory retirement age the FAA extended to 65 — are leaving their seats in droves. That hit the airlines “full on,” he said, “and they’re all looking for opportunities to accelerate or enhance the pool of pilots they can choose their future employees from.”

Owens, Perle and Lee all plan on pursuing careers in aviation, but, they said, the experience of flight is something to enjoy for its own sake. Owens recalled the day she flew solo for the first time.

“At first, it was nerve-wracking,” she said. “But as you get off the runway, you lift off and turn out and get back up, it’s amazing. You feel so free. Wow, I feel so accomplished in life.”

Editor’s note: This story has been changed to reflect the correct Boeing corporate headquaters. The Bulletin regrets the error.