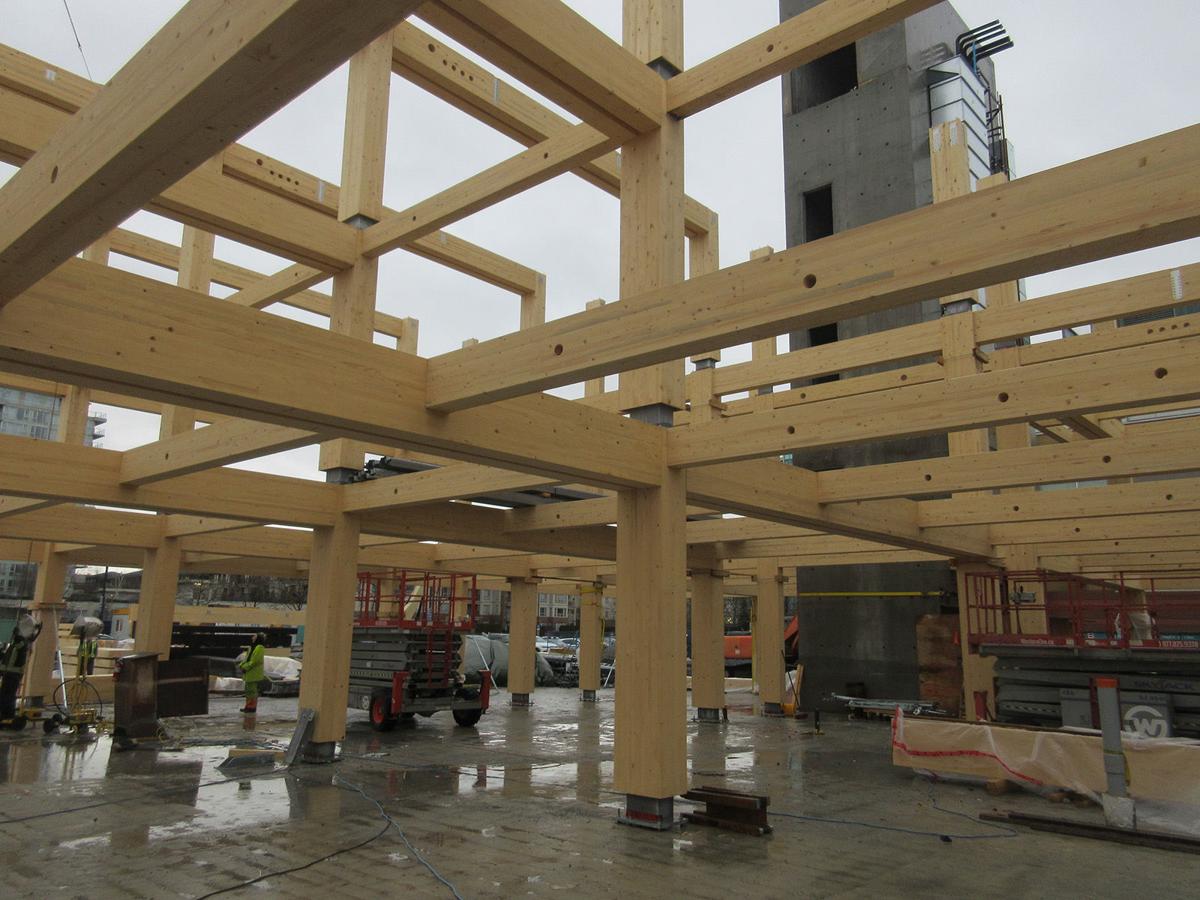 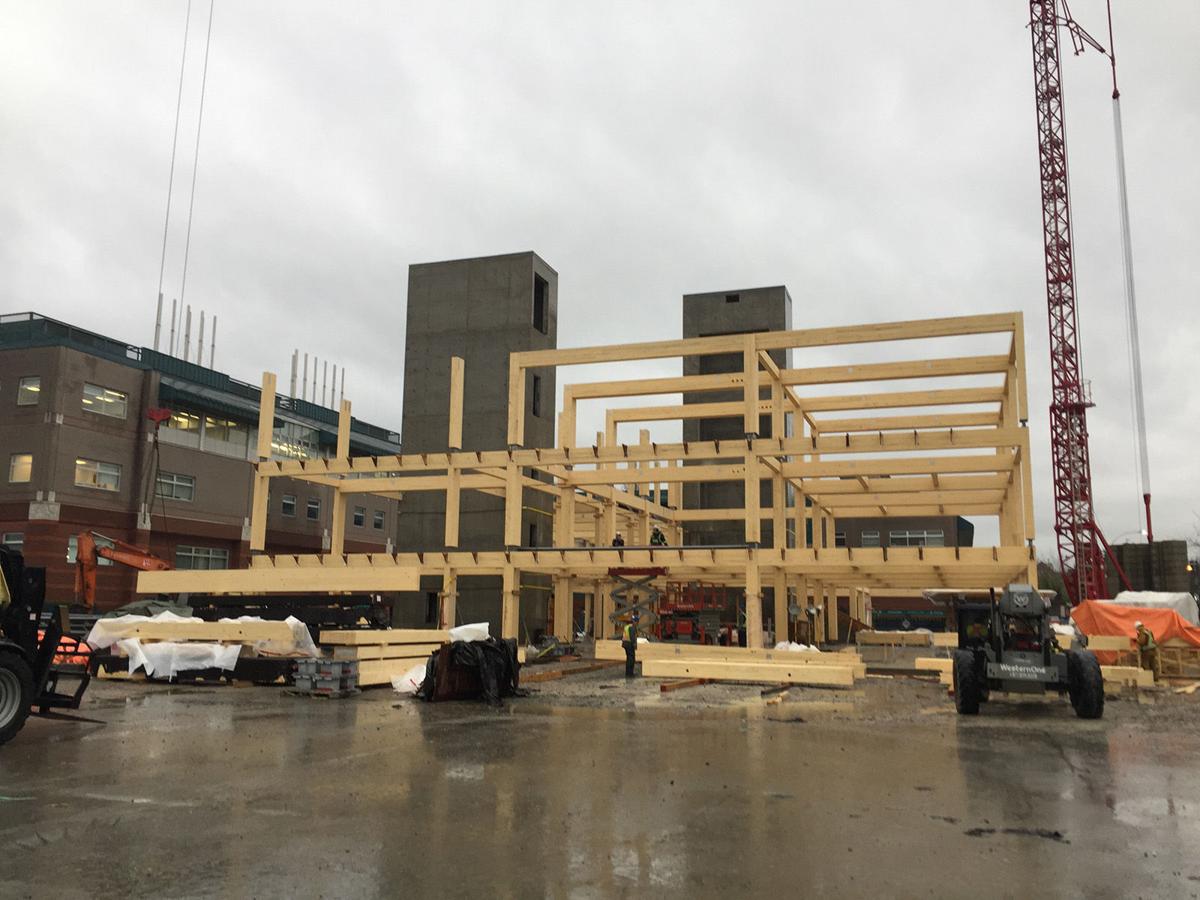 Construction of the four-story CLT hybrid Wilson School of Design in Richmond, British Columbia, last year. The glue-laminated post-and-beam framing is built on a concrete foundation.

Construction of the four-story CLT hybrid Wilson School of Design in Richmond, British Columbia, last year. The glue-laminated post-and-beam framing is built on a concrete foundation.

The loggers who made Seattle a center of the national timber industry are long gone.

And only a few wooden landmarks of the timber heyday, mostly churches, still exist on the low-slung skyline of Ballard, the neighborhood once known as Shingleton.

But as concerns over climate change give new life to wooden building design, that could change.

In the coming years, Ballard will be home to Seattle’s first tall building built almost entirely from wood. Rising eight stories from the current Ballard Blossom florist on Market Street will be a hotel built principally from cross-laminated timber, or CLT — durable panels made from binding layers of wooden planks with adhesive.

The architects behind the hotel say its wooden structure “responds to the historical influence that timber has played” in Ballard.

For those who remember the fiery 1990s protests over logging in the spotted owl’s Olympic Peninsula habitat, building with wood seems counterintuitive.

Mark Wishnie, the director of global forestry at The Nature Conservancy, said he understands the whiplash that some feel about the environmental movement’s about-face on timber. One of the biggest challenges to increasing demand for CLT construction, he said, is the “scars in people’s memories” — the perception that logging equals deforestation.

For many, the old Shingletown symbolized just that kind of environmental catastrophe: mass deforestation, including the logging of old-growth forests.

That doesn’t have to be the case, Wishnie said, if logging is managed well. But he emphasized that cross-laminated timber only makes sense if the wood comes from a forest that’s managed responsibly.

Since an April code change made it easier for cross-laminated timber buildings to win city approval, developers have applied for permits for three such towers, including the Ballard hotel — and Seattle architects say plenty more are on their way.

The code change was “sort of like the dam breaking,” said architect Jack Chaffin, who is designing one of the new buildings.

Cross-laminated timber is a subset of mass timber — ultra-dense blocks of planks bound together with glue or nails. Mass timber is far from new: In 1982, the Tacoma Dome was framed with thousands of glue-laminated beams, a form of mass timber.

But until recently, architects weren’t able to envision building hundred-foot-plus towers entirely of wood, because fire codes in cities such as Seattle wouldn’t allow it.

Other cities make use of the new timber. Tacoma has the six-story Brewery Blocks apartments that will open this fall and a 127-room hotel is under construction at Joint Base Lewis-McChord. Spokane has a 150,000-square-foot Catalyst office building that will open next year. Portland’s Carbon 12 condominium opened in 2017, and the University of British Columbia has been using the material for years.

In Seattle, the Ballard hotel will be joined by two cross-laminated timber apartment buildings on Capitol Hill — an eight-story project at 621 Ninth Ave. and a 12-story project at 1422 Seneca St.

It is unlikely an entirely wood tower will come to Seattle anytime soon. That’s because codes encourage that some of the building’s earthquake-proofing elements be made from concrete — even though cross-laminated timber should perform well in an earthquake, said Erica Spiritos, preconstruction manager for Swinerton Mass Timber in Portland.