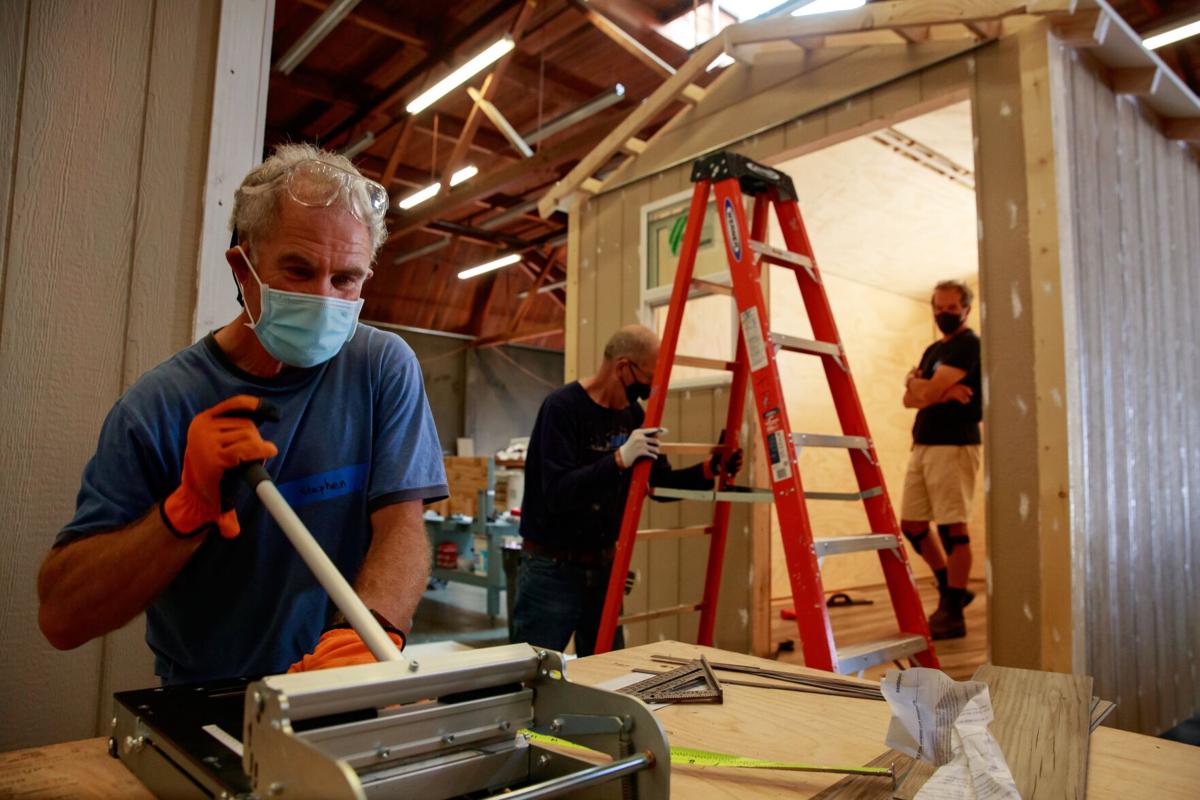 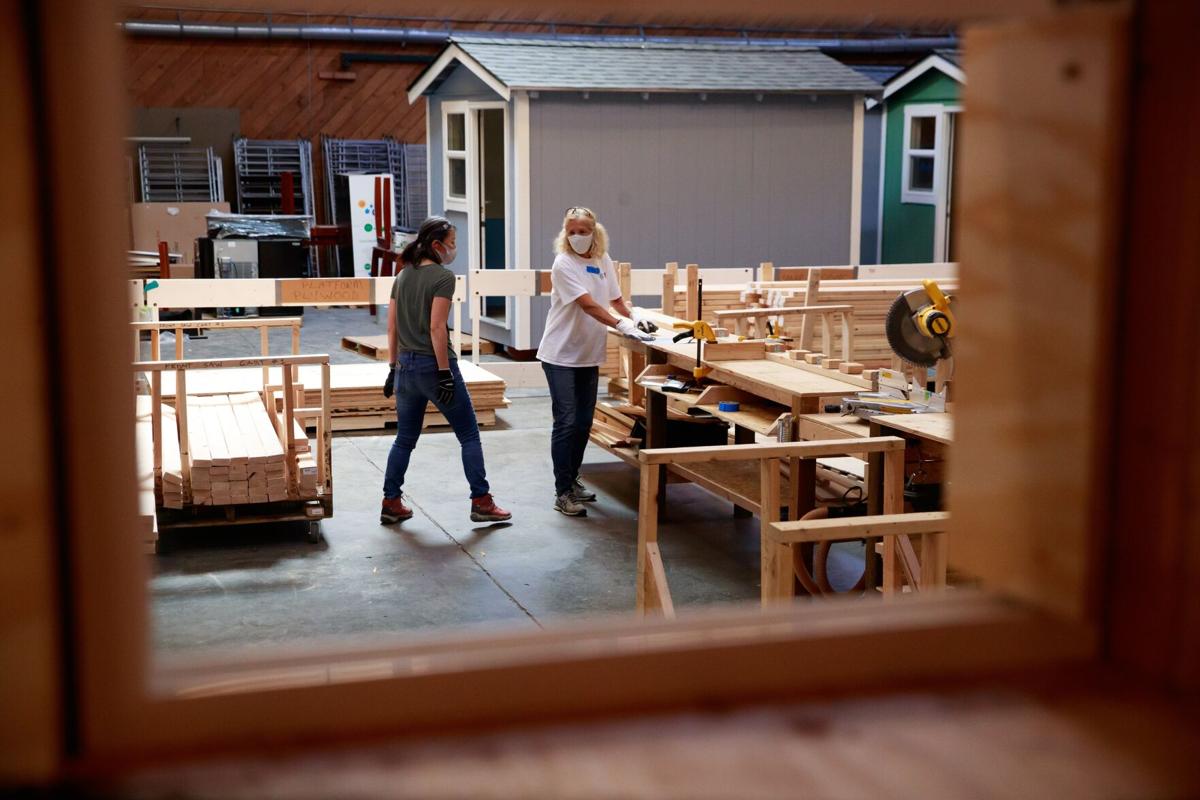 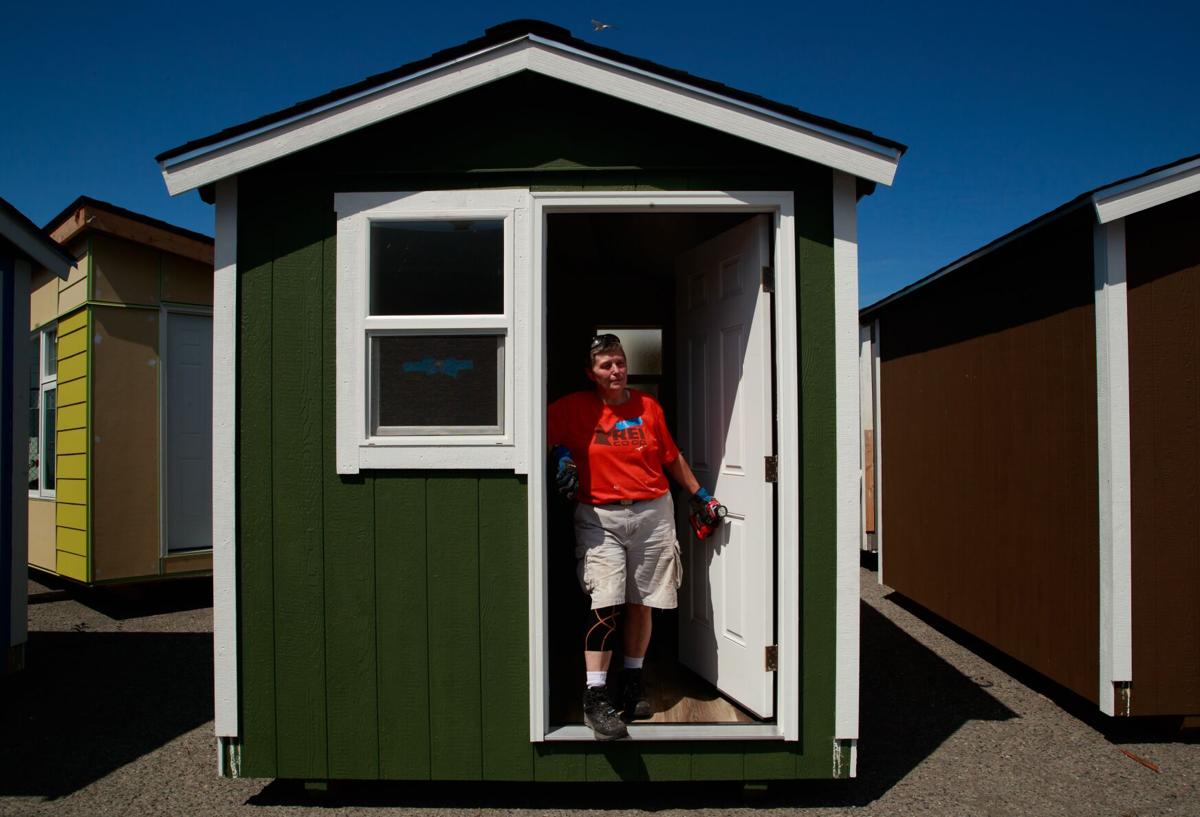 A portrait of Barb Oliver, director of operations with Sound Foundations NW, is taken in one of their tiny homes in Seattle Thursday, June 3, 2021.

A portrait of Barb Oliver, director of operations with Sound Foundations NW, is taken in one of their tiny homes in Seattle Thursday, June 3, 2021.

In an 8,000-square-foot Seattle warehouse, about a dozen volunteers plan to work six days a week to build at least 10 shed-sized homes a month for homeless people.

Sound Foundations NW and other builders are producing 100 tiny houses, expected to hold up to 130 people, this summer. The houses will sit on two sites in North Seattle and potentially double the size of another village.

Seattle included these villages as part of its record $167 million 2021 homelessness budget. The materials for each house normally cost around $2,500, although they’re $4,500 right now because of a national lumber shortage, according to Josh Castle, advocacy and community engagement director for the Low-Income Housing Institute, the city’s main contractor for village operations. It costs an average of $600,000 a year to run each village, with case management and food, Castle said.

The city is capitalizing on an infusion of federal money to relieve the growing frustration among community members and business owners around visible homelessness. While shelters that hold many people together in one space were considered the most cost-effective option, data from nonprofit outreach providers has found that people living outdoors would usually rather go to a tiny house than an emergency shelter.

The villages being assembled this summer are just the beginning of a broader shelter push. There are 298 houses in eight villages across the city. Barb Oliver, director of operations and volunteer coordinator at Sound Foundations NW, and other boosters hope to double that number by the end of 2022, using philanthropy and state and federal funding from the American Rescue Plan Act.

Said city Councilor Andrew Lewis, “I’d like to do more than that, but that’s as fast as the overstretched [Human Services Department] team can do.” Lewis, runs the council’s committee on homelessness and launched a campaign earlier this year to get businesses to donate startup costs for villages. He dubbed the campaign “It Takes a Village.”

Seattle is leaning more on the tiny house village model than perhaps any other city, though Los Angeles County hopes by the end of the year to have 425 portable, prefabricated composite plastic pods, which are made in Everett, Washington, that can be set up in minutes.

”These new investments in tiny home villages are effective shelter options to end a person’s experience with homelessness and add much needed new shelter capacity to offer more individuals safer spaces who are living in our parks and sidewalks,” Durkan said in a news release.

While tiny houses are effective at slowing the cycle of returning to the street, they don’t necessarily end someone’s homelessness. More than 7% of the people who left the villages in 2020 went back to shelters, and a fifth went to a “place not meant for human habitation,” according to data from the village operators. A little less than half — 47%, or 118 people — of residents left for permanent housing.

But new spaces for homeless people, including several recently leased hotels for shelter, may also mean more encampment removals. They were largely suspended during the pandemic, but the city has slowly increased removals this spring.

The Low-Income Housing Institute, which runs almost every tiny house village in Seattle and is expanding its portfolio of villages around the state, will operate the three new projects. The nonprofit also runs villages in Tacoma and Olympia and is opening new villages this summer in Skyway and Bellingham. Donations for Lewis’ tiny homes campaign will most likely go to the institute.