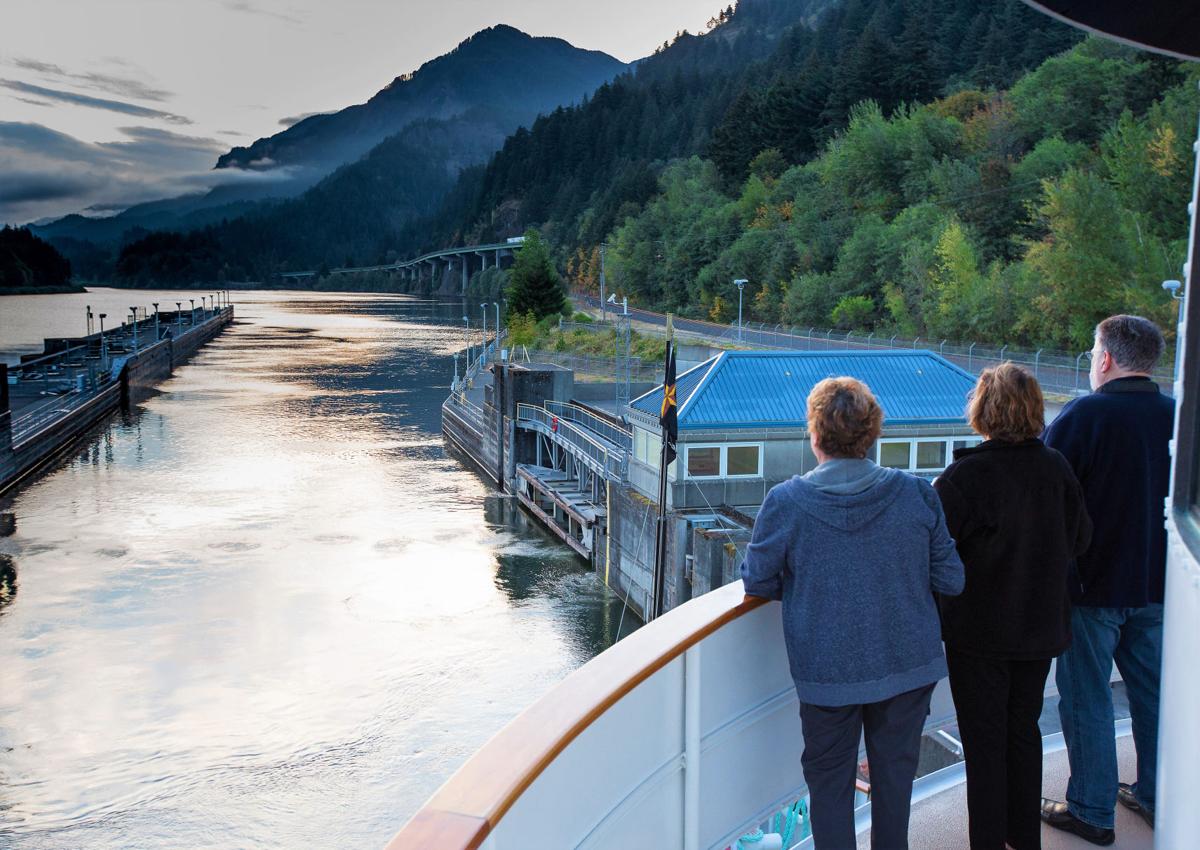 Passengers stand on the bow of the SS Legacy looking over the navigation lock at the Bonneville Dam in 2016. The American Queen Steamboat Co. may add a cruise on the Columbia and Snake rivers. 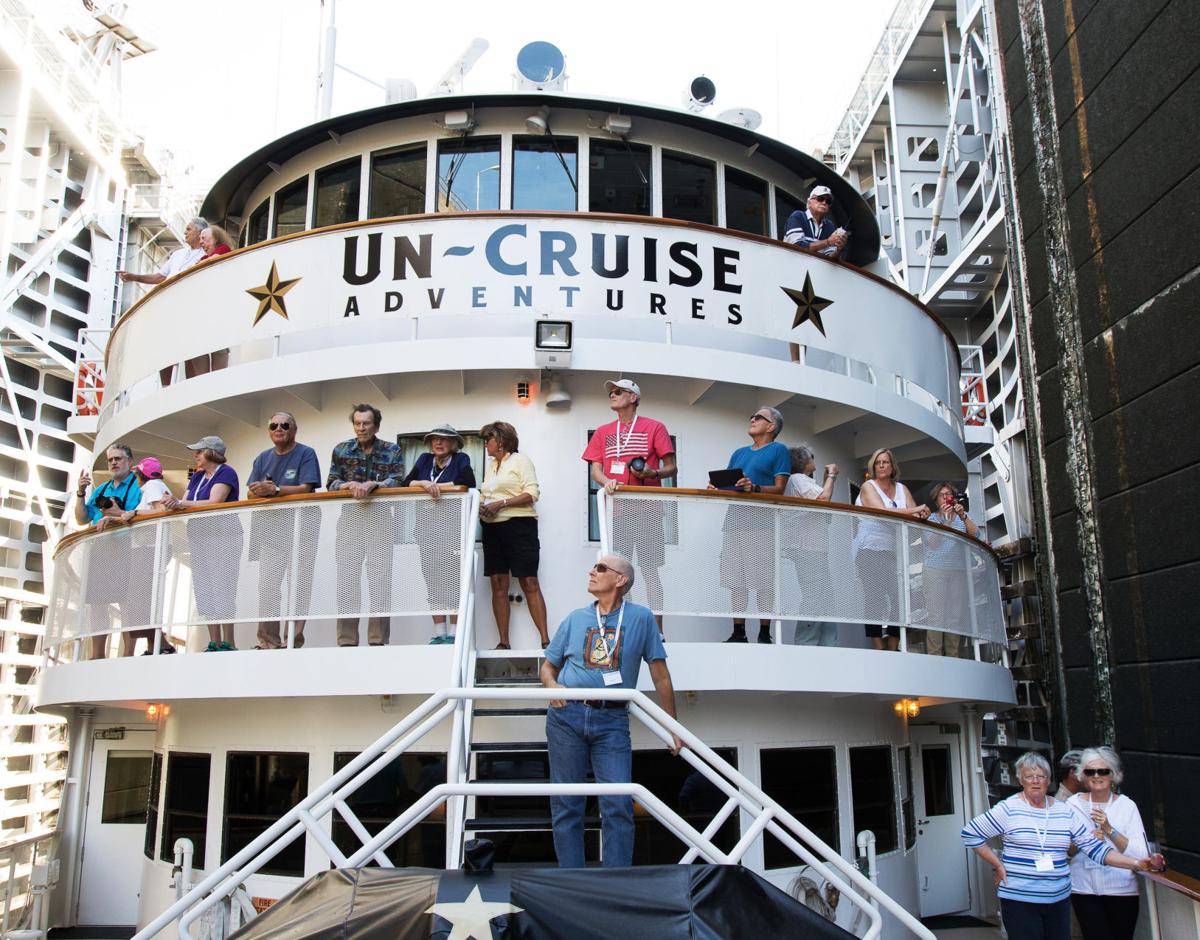 Passengers stand on the bow of the SS Legacy looking over the navigation lock at the Bonneville Dam in 2016. The American Queen Steamboat Co. may add a cruise on the Columbia and Snake rivers.

On the fancy new 245-passenger American Countess riverboat, passengers sip complimentary mint juleps on a top deck, masks wrapped around their wrists like bulging bracelets, while the ship’s big, red paddle wheel churns through the Mississippi. It’s a post-pandemic sight to behold — even if these are not quite post-pandemic times.

Still, its mere occurrence puts John Waggoner, founder and chief executive officer of the four-ship American Queen Steamboat Co., in the catbird seat as far as the cruise industry is concerned.

“There’s a big push to buy in America,” Waggoner said in an interview. “So: U.S.-flagged vessels, built in America, manned by U.S. employees. I think there’s a big move towards that.”

There’s also the fact that he’s allowed to operate while much-larger competitors cannot, including Royal Caribbean International, Carnival Cruise Line, even mega-river cruise line Viking River Cruises. Since the cruise industry shut down in March 2020, the U.S. Centers for Disease Control and Prevention has blessed only cruise ships carrying fewer than 250 passengers and crew. Waggoner’s four ships are among few of these in the U.S., making them a rare option for millions of American cruise lovers who are otherwise stuck in a holding pattern.

American Queen is back in business with two boats-the American Countess and the smaller, 166-passenger American Duchess-both operating since mid-March with reduced capacity to allow for social distancing and comply with the 250-person limit. Its competitor American Cruise Lines also returned to the Mississippi on March 21, and plans to have three boats on the river in April. These include a new, modern, 190-passenger riverboat and two small paddle-wheelers. All will sail at limited capacity, with a vaccine required for departures through April 30. After that, the company plans to only require negative PCR tests.

If the CDC allows it, Waggoner hopes to add the opulent American Queen, the world’s largest paddleboat — which can carry more than 420 passengers — by the end of May. All three vessels sail the Mississippi and some tributaries: the Ohio, Cumberland, and Tennessee rivers. A fourth riverboat may soon traverse the Columbia and Snake rivers in Washington and Oregon, following the route of 19th-century explorers Lewis and Clark, pending negotiations with those state governments.

Waggoner said the numbers at American Queen Steamboat are running ahead of 2019 levels. The company saw significant upticks in January, on the heels of the U.S. vaccine rollout, and again in February, when it announced a requirement that guests, crew, and even bus drivers be vaccinated for sailings, starting in July, he said. “We’re excited with our sales momentum.”

For trips before July, guests are required to take a PCR test during a one-night pre-cruise hotel stay that’s included in the price of eight-night sailings that start at $2,000 per person. Waggoner said he expects most passengers, a demographic that tends to be age 65 and up, will have already been vaccinated.

Shots were a big factor in the company’s decision to get back on the river.

“We’re like a family business,” Waggoner said. “I had to ask myself: When am I comfortable? When would my wife be comfortable? Our family is rushing to get the vaccine and start cruising again.”

Ports such as Baton Rouge, Louisiana, and Natchez, Mississippi, have been anxious for the riverboats to get back in business. About 30,000 people sailed the Mississippi and its tributaries with American Queen Steamboat Co. in 2019 for an estimated impact of around $40 million in key river markets. To show Louisiana’s support, Lt, Gov. Billy Nungesser was among the dignitaries attending the christening of the American Countess on March 21.

During the pandemic, American Queen Steamboat Co. laid off some 700 employees, Waggoner said. About a third have been hired back, a number that will increase as more ships resume cruising.

“A lot of people have been waiting for us to turn on the ‘We’re Open’ sign,” he said. “Right now we’re about where we should be.”