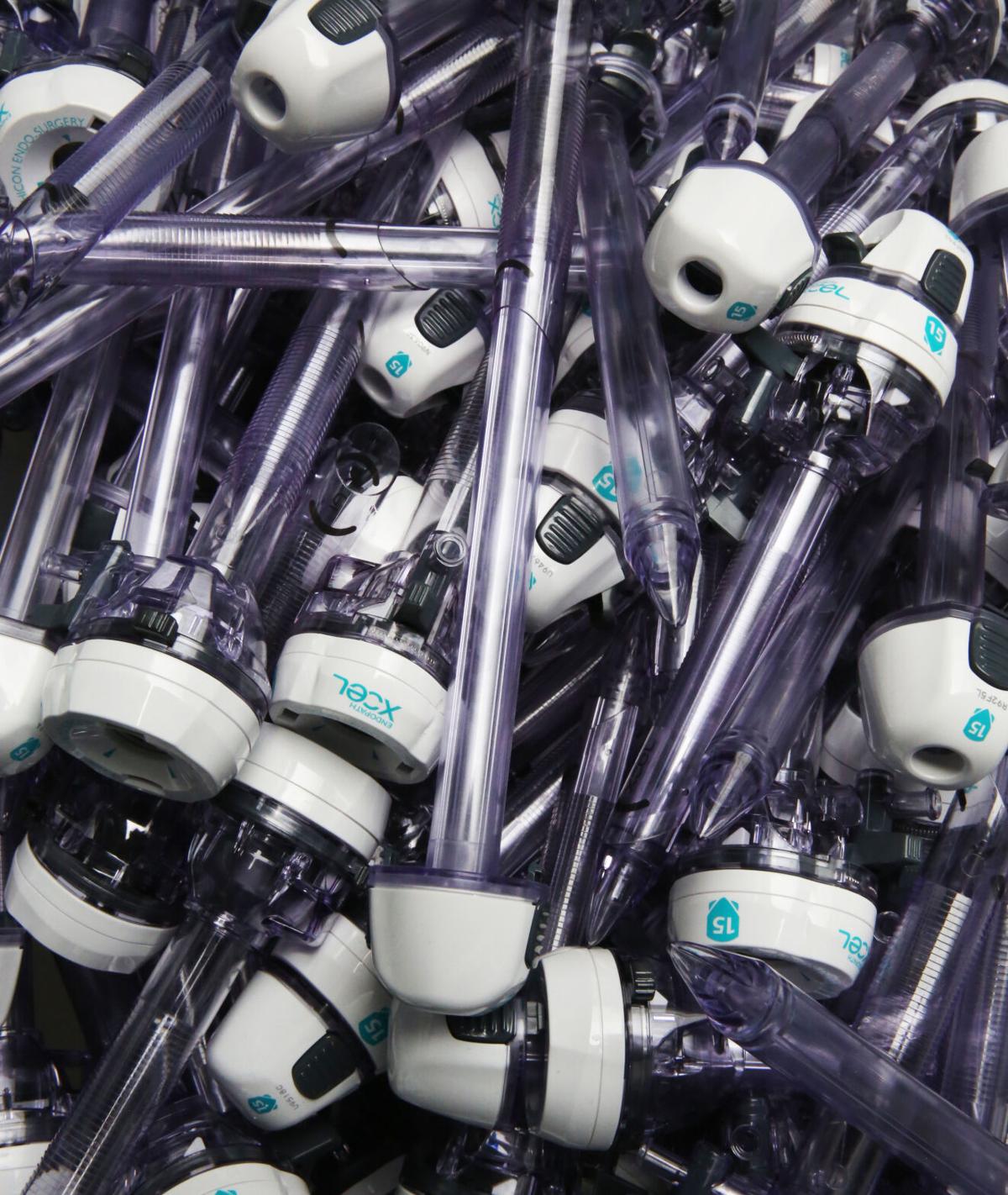 One of the surgical instrument that Medline Industries, Inc. remakes are trocars. 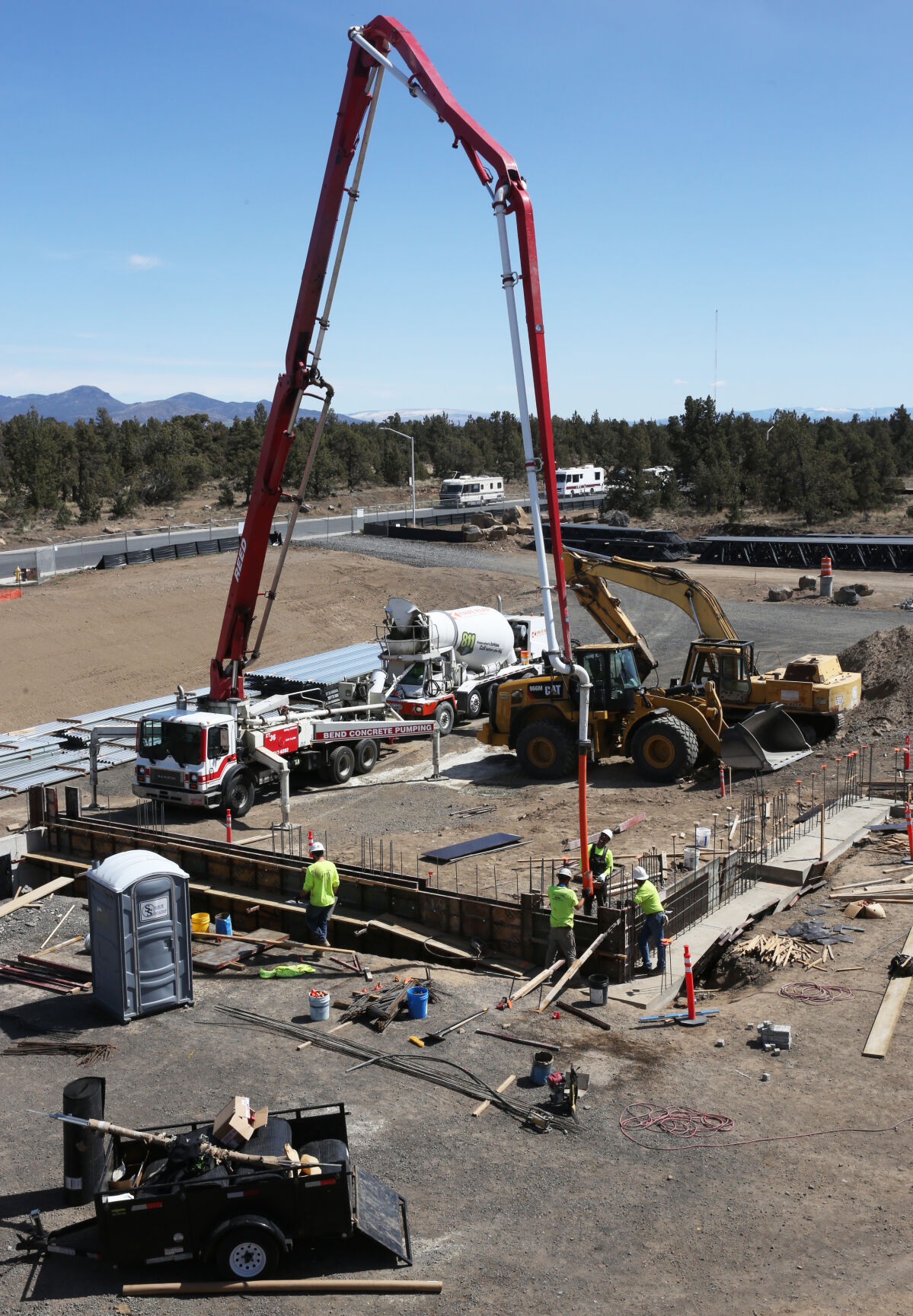 Construction is underway on an expansion that will double the size of Medline Industries, Inc. in Redmond. 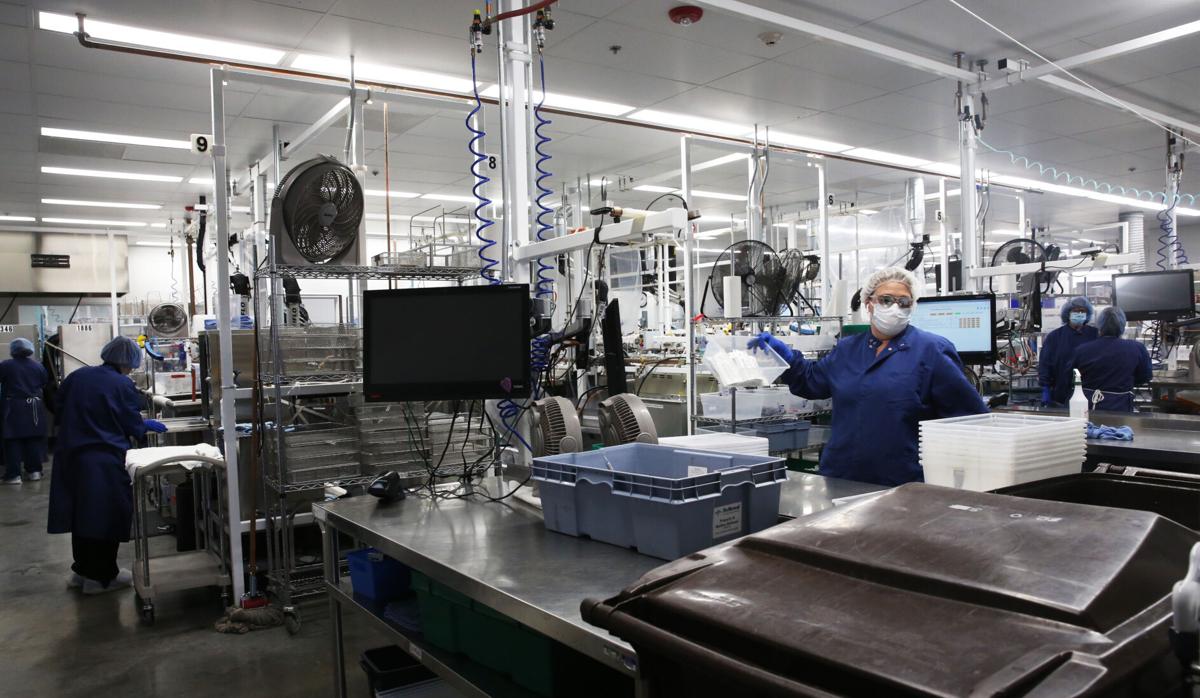 Debbie Rios works in the decontamination area at Medline Industries, Inc. in Redmond where more than 200 employees work to reprocess medical devices. 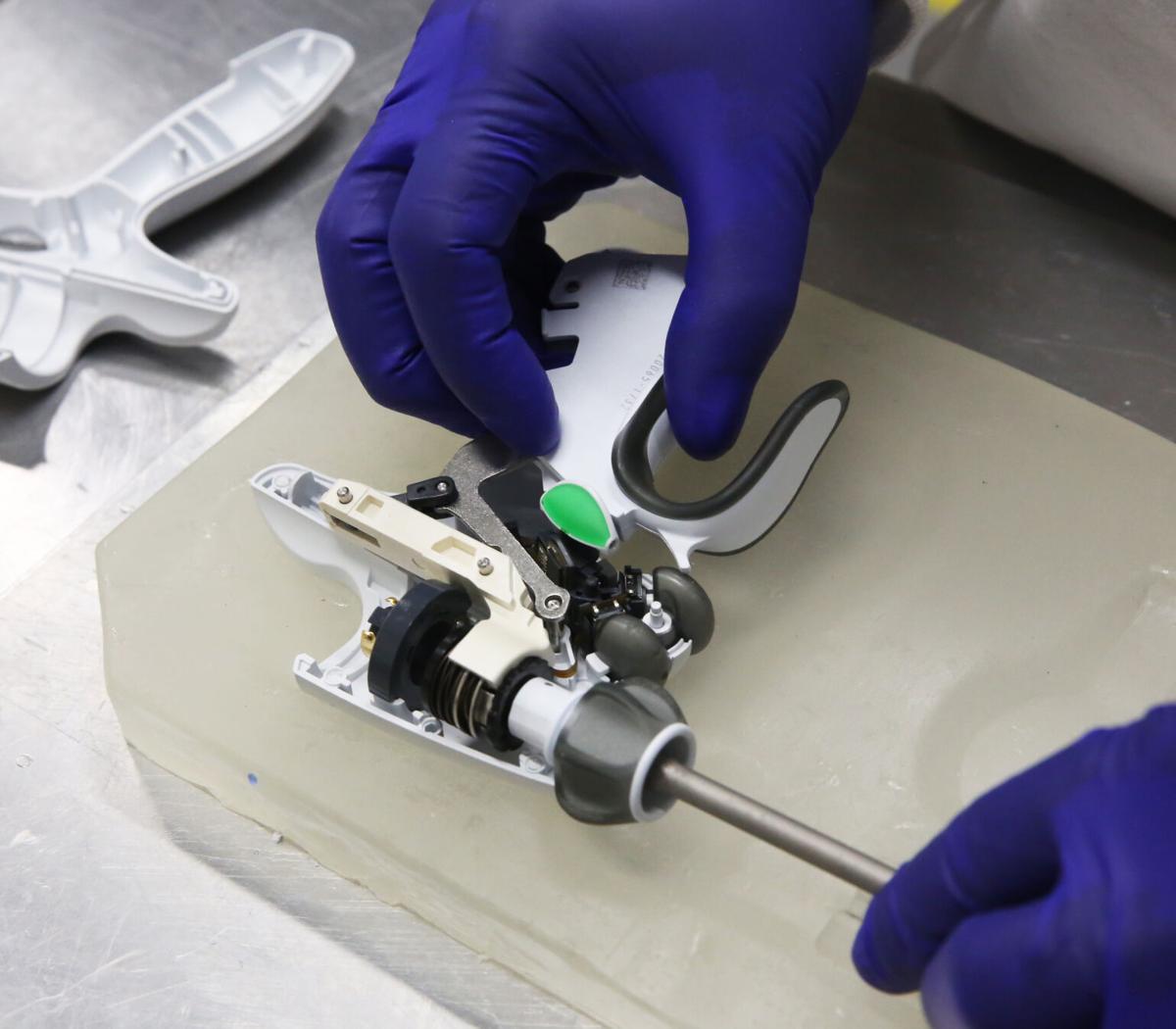 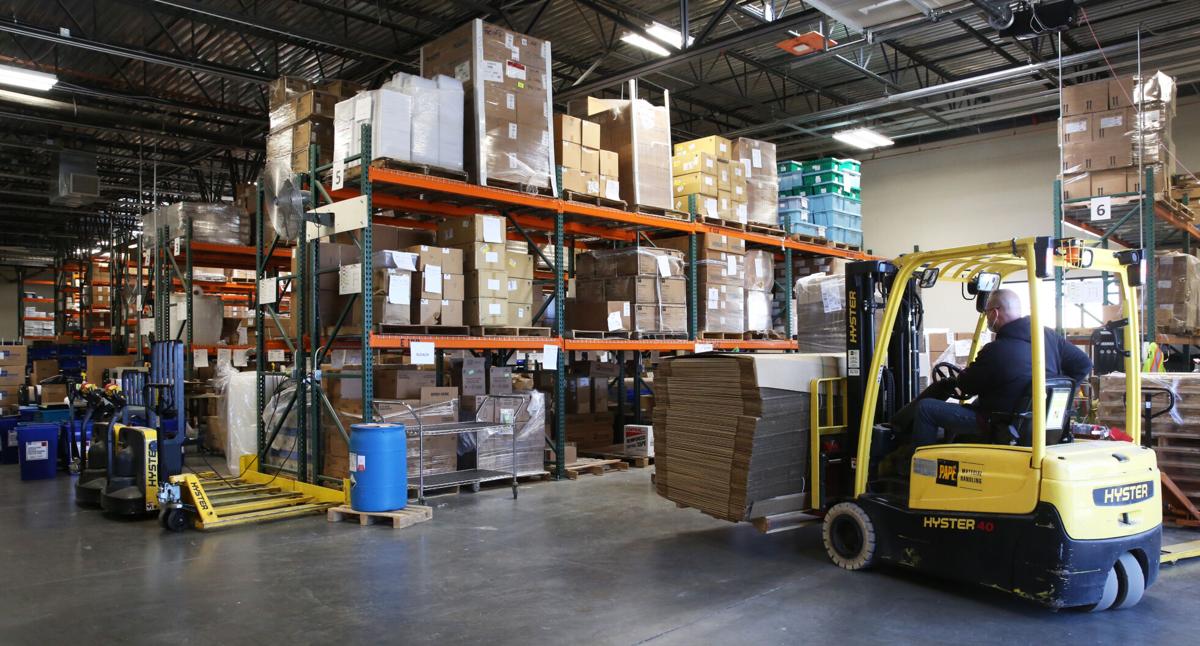 The shipping and receiving area at Medline Industries, Inc. in Redmond.

One of the surgical instrument that Medline Industries, Inc. remakes are trocars.

Construction is underway on an expansion that will double the size of Medline Industries, Inc. in Redmond.

Debbie Rios works in the decontamination area at Medline Industries, Inc. in Redmond where more than 200 employees work to reprocess medical devices.

The shipping and receiving area at Medline Industries, Inc. in Redmond.

Business is so good for a Redmond manufacturer that repurposes medical devices that it is doubling its size while it keeps thousands of pounds of waste from going to the landfill and saving money for health care companies.

Despite the pandemic and the cancellation of elective surgeries over the past year as a way for hospitals to keep their beds available for COVID-19 patients, business has been strong for the privately held company, Medline ReNewal. Construction is underway now to double its manufacturing footprint.

Last year, the company recycled about 5.2 million devices from a list of more than 4,300 different items, cleans them, sorts them and sterilizes them to be repackaged for reuse. It’s a labor-intensive business that is on the upswing, said Frank Czajka, president of Medline ReNewal division. The Association of Medical Device Reprocessors said that it’s a $500 million industry with the potential to grow. In 2018, more than 8,000 hospitals and surgical centers in the United States, Canada and Europe partnered with commercial reprocessors.

“There’s lots of know-how in Redmond,” Czajka said. “Redmond has been great to work with.”

“This expansion is a good example of how local companies can grow in Central Oregon, be acquired by larger corporations, adding horsepower — capital and talent — to further obtain market share while creating additional demand for their products through innovation,” Stark said in an email. “Given their significant growth trajectory, it (didn’t) take long before they needed additional space. That time has come.”

St. Charles Health System contracts with Medline ReNewal for reprocessing its medical waste, said Lisa Goodman, the hospital spokeswoman. The contract saves the hospital 40% to 60% in purchasing the equipment new.

“It is a great program to help reduce the cost of disposable items, but also helps with limiting the number of items that are put in the landfills,” said Tracy Bloo, surgical services manager at St. Charles Redmond. “Every time we send an item to be reprocessed, it stays out of the landfill. Even if St. Charles doesn’t buy certain items back, other hospital organizations that utilize Medline ReNewal can purchase reprocessed items St. Charles has turned in. So, it’s a win-win for all.”

A recent study by the Fraunhofer Institute for Environmental, Safety and Energy Technology, found that the global warming impact was cut by 50% just by reprocessing catheters over making new ones.

In addition, the process of reprocessing medial devices saved the medical industry about $545 million, according to the Association of Medical Device Reprocessors. Medline ReNewal’s process has diverted the equivalent of 37 million water bottles or more than 1 million pounds of waste, Czajka said. As an industry, reprocessing medical devices kept 15 million pounds of waste from landfills.

“Medical facilities get devices back at a lower rate,” Czajka said. “The health centers are finding that partnering with us is helping grow our business. We’ve been fortunate to have good partners that have chosen our company.”

Medical device reprocessing is regulated by the U.S. Food and Drug Administration, which must approve single-use devices for reuse and requires the same standards apply as if the device was newly manufactured, according to the Centers for Disease Control and Prevention.

“Medline is one of Central Oregon’s ‘Gazelle’ companies, in that they continue to grow, even during challenging economic times, helping Redmond to further diversify its economic base and insulating it from future storms,” Stark said.